Summerhouse in Brandenburg by Doris Schäffler

Berlin-based architect Doris Schäffler has sent us photos of the Summerhouse in Brandenburg project. 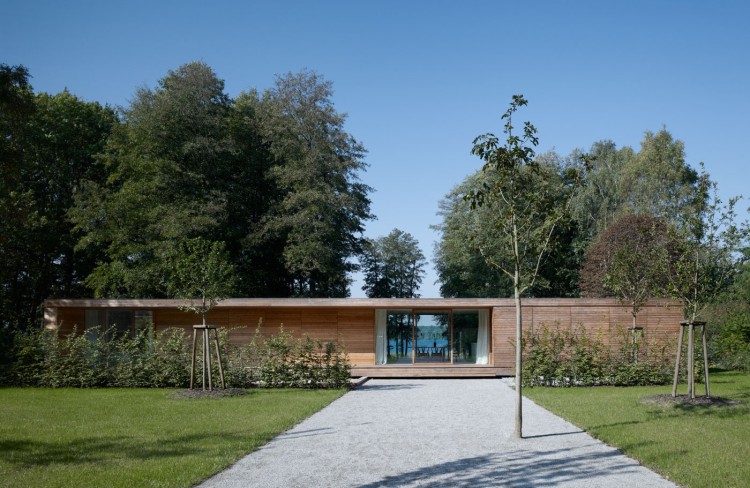 Summerhouse in Brandenburg by Doris Schäffler:

“This house on Lake Scharmützel, which was recently awarded the German Timber Construction Award, is a summer and weekend escape for a family with two children. As committed urban dwellers (they spend most of their time in a flat in downtown Berlin), the family was not willing to give up their urban way of life and move to the suburbs, so they opted for a retreat that would provide the maximum contrast to their everyday life in the city. The result is a simple refuge that interacts harmoniously with the surrounding landscape.

The desire to leave the site—a wooded area populated with black alder trees—as untouched as possible inspired the architect to design a house that would interact with but not impose upon the environment. The house was meant to float over the terrain like a temporary guest.

The elongated plot is defined by a natural edge, which divides it in two parts: a smaller section towards the woods and a larger area gently sloping towards the lake. The house was positioned to provide a generous view of the changing scenery and the lake through a large central window, and to create a boundary for a wind-protected area between lake and building.

The main requirement for the interior design was to provide a distinct contrast to the family’s city apartment. Unlike the spacious whitewashed Art Deco rooms of their downtown flat, the rooms in the summerhouse are relatively small and low, like on a ship. Because life for this family mostly takes place outdoors, all rooms except the living room and open kitchen are reduced to the absolute minimum. Still, the small spaces feel larger due to floor-to-ceiling glazing, which not only brings sunlight and views inside, but also allows a direct exit from each room to the outside. The rooms open onto long, covered terraces, which arrange the volume sculpturally and offer both rain and sun protection. Because of these overhangs, the house barely heats up during the summer despite the high proportion of glazing, and in winter a low degree of solar gain keeps things warmer.

All surfaces, even in the bathroom, are clad in pale pine. Closets are built into the walls and form a homogeneous wall—another reference to ship building. This house had to have the flexibility to accommodate friends, so the bedrooms are equipped with berth-like, attachable beds that easily become single beds, double beds, or bunk beds. These convertible bed frames can create flexible sleeping accommodations in any rooms as needed.

The house, with its timber frame construction, is entirely made of renewable and recyclable wood. All surfaces are clad in larch wood, and the natural weathering helps to integrate the house seamlessly with the landscape. Inside, the consistent material palate and minimized detailing provide a simple and elegant framing for the outside, which is constantly present through the large windows.”

A Minimalist Home in Wilmersdorf

A 19th-Century Home in Berlin Gets Revamped by asdfg Architekten