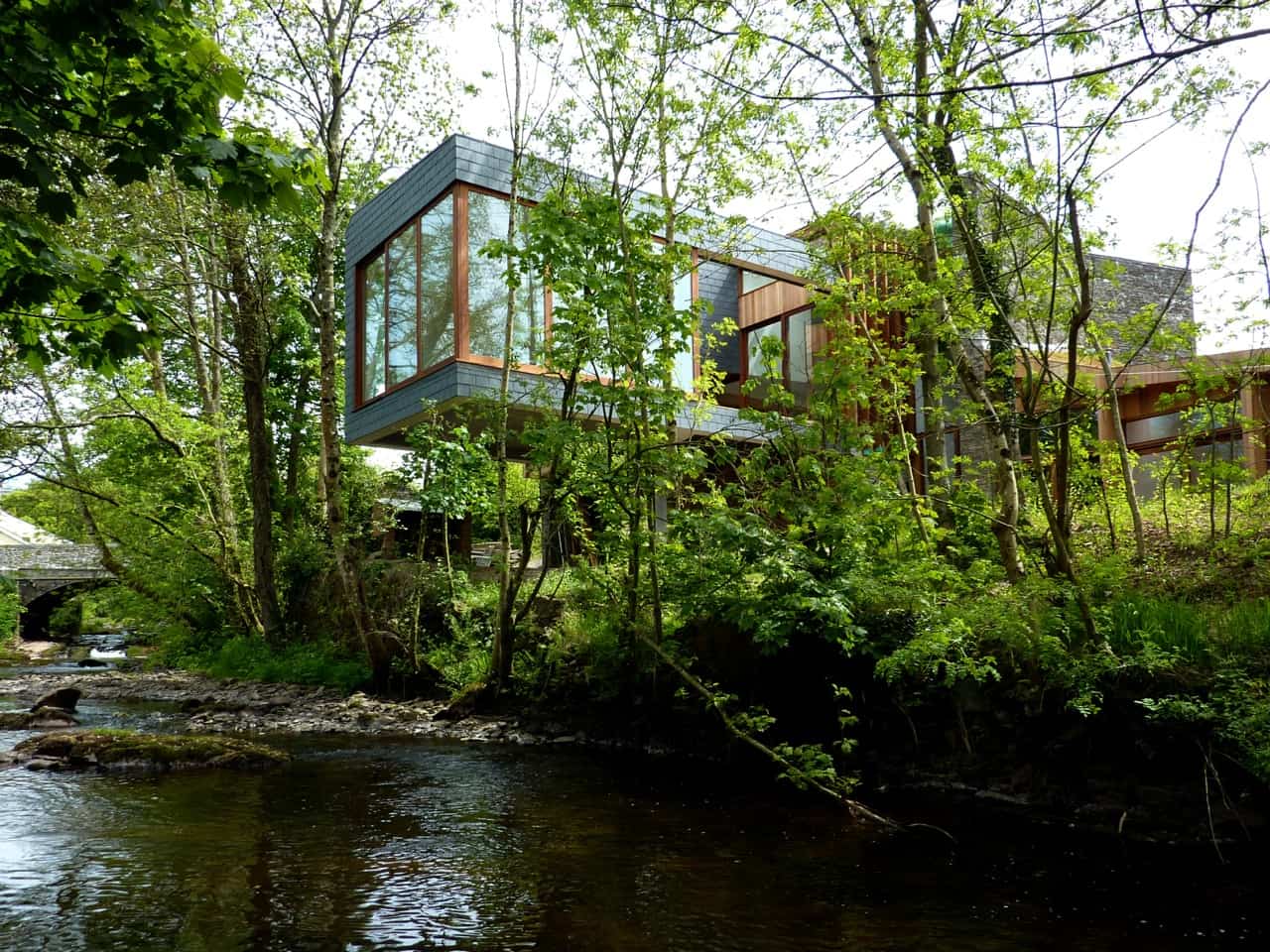 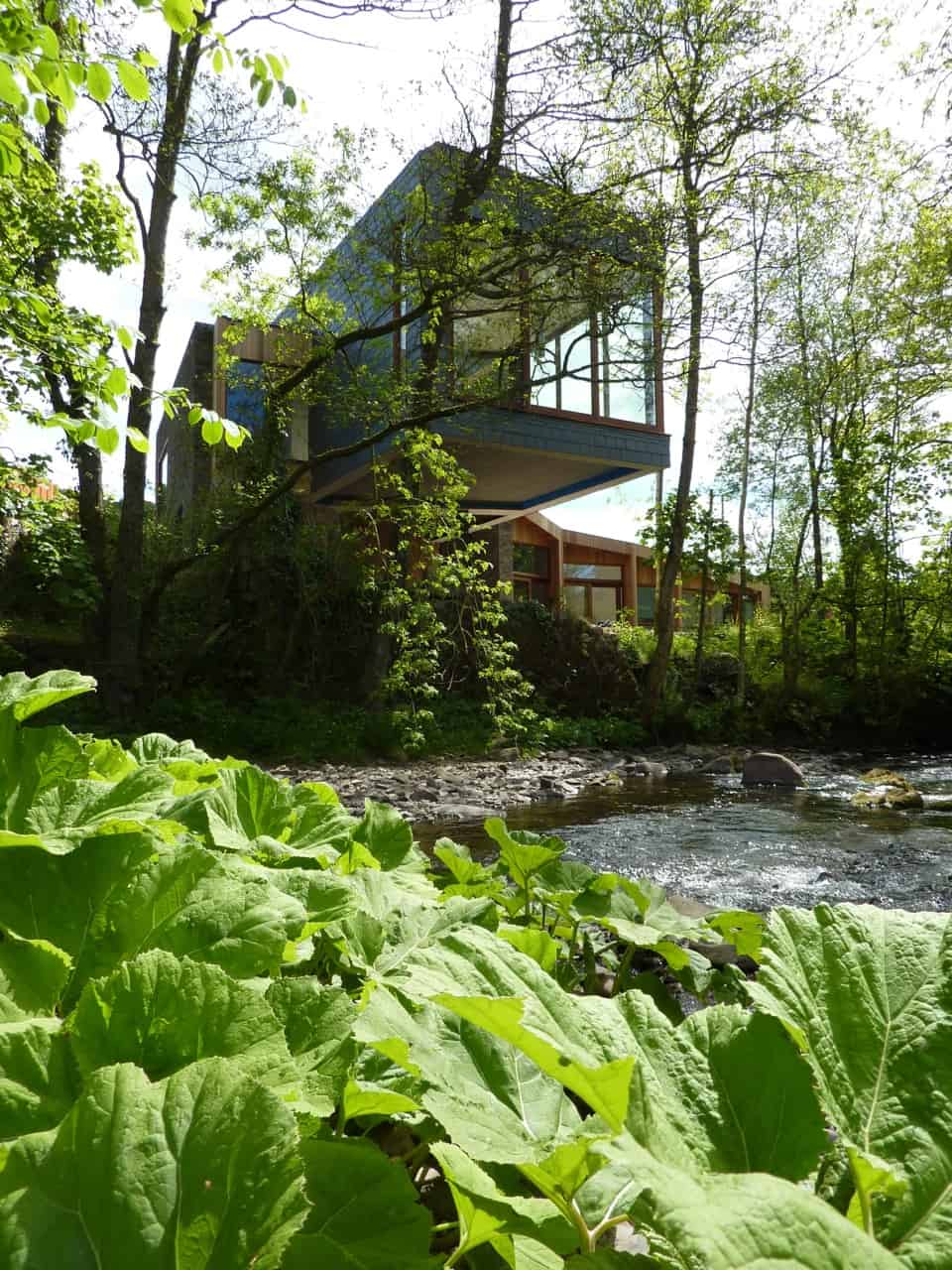 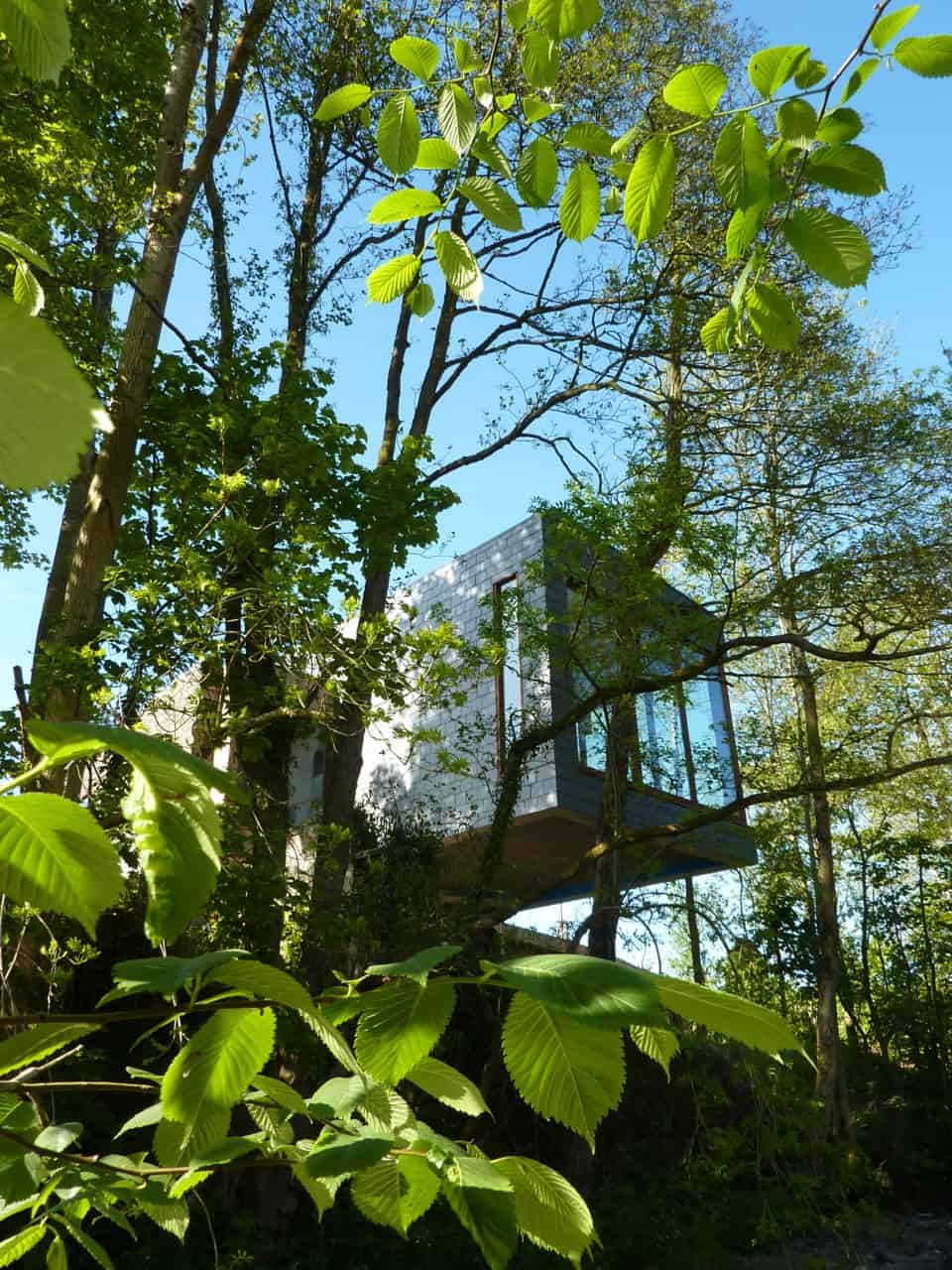 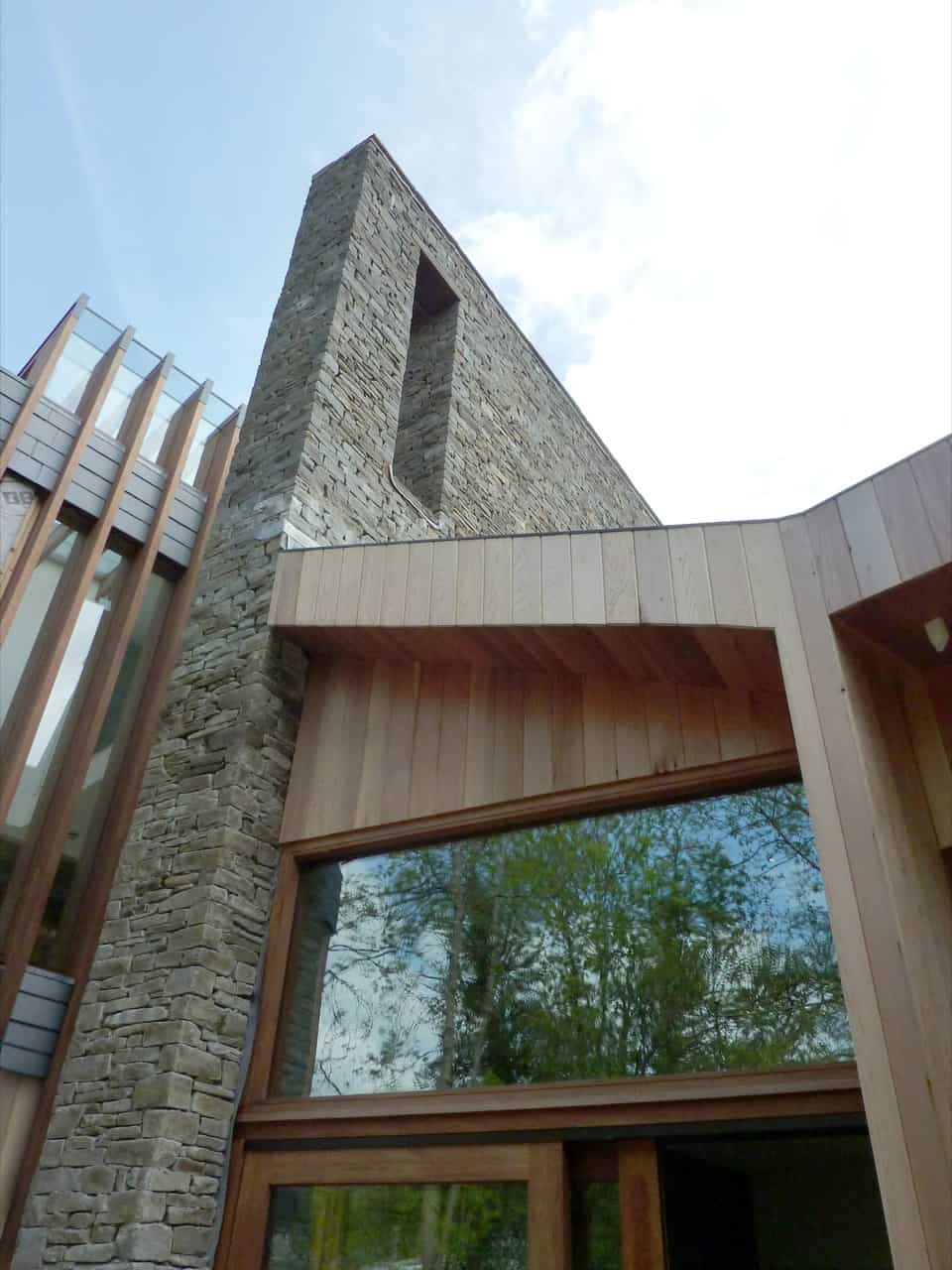 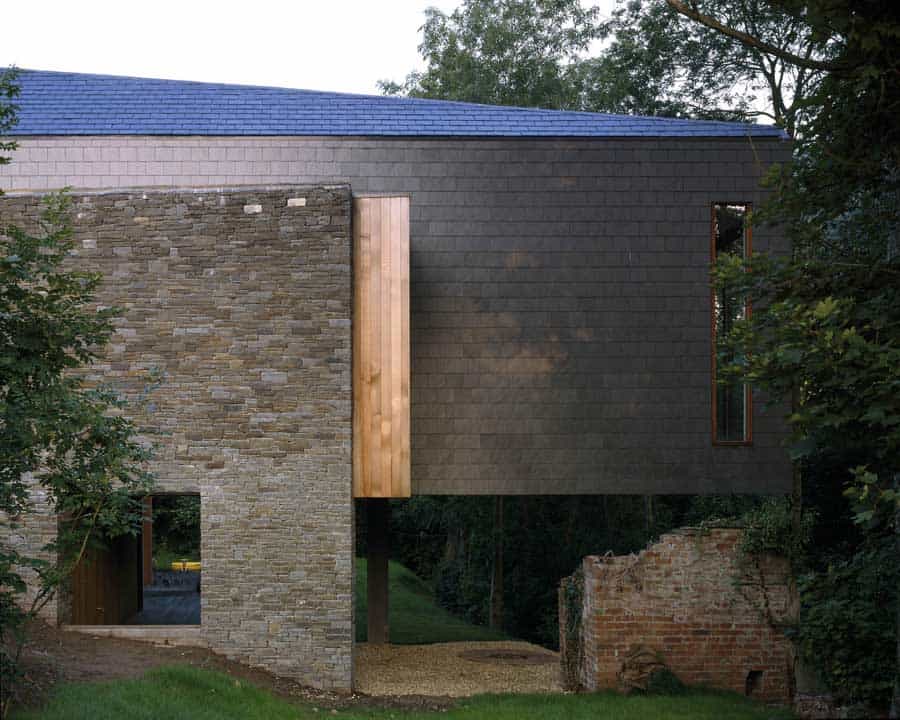 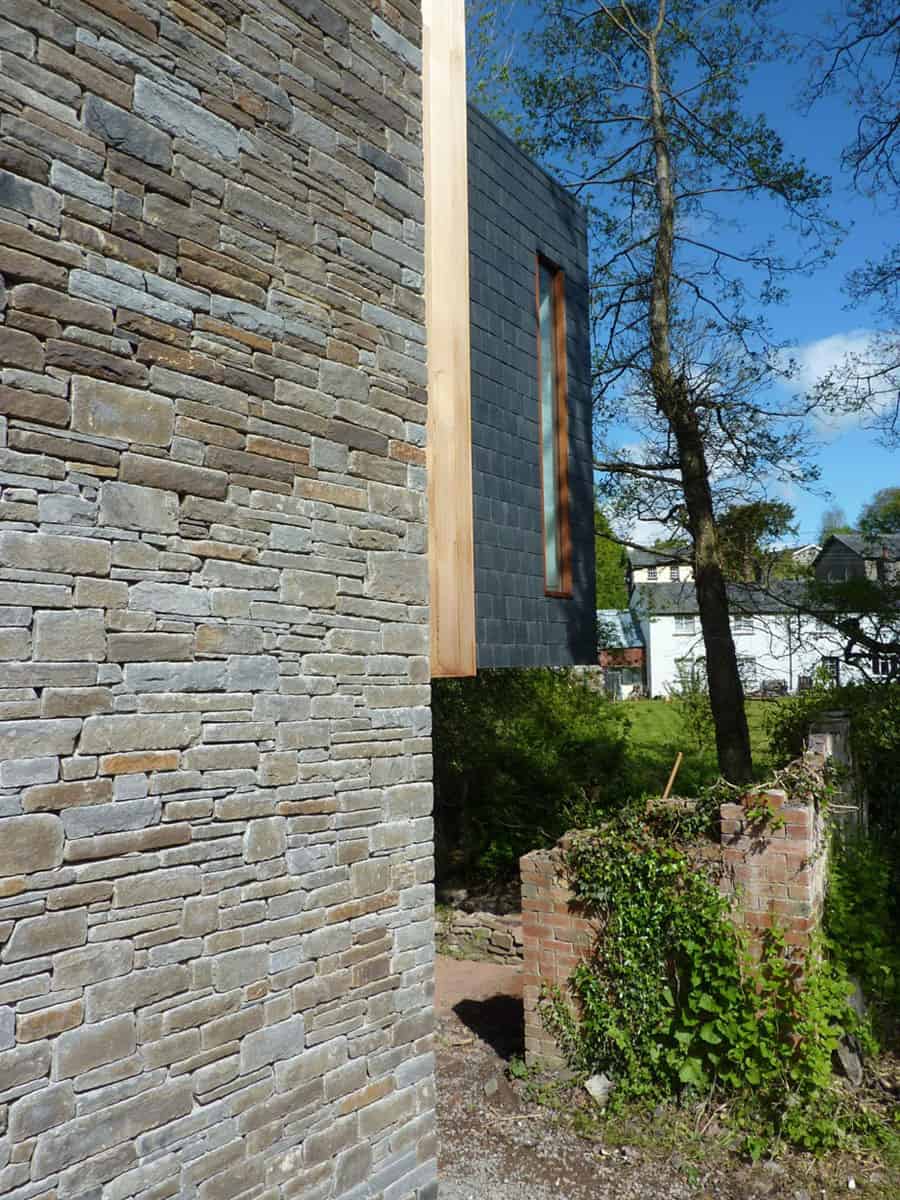 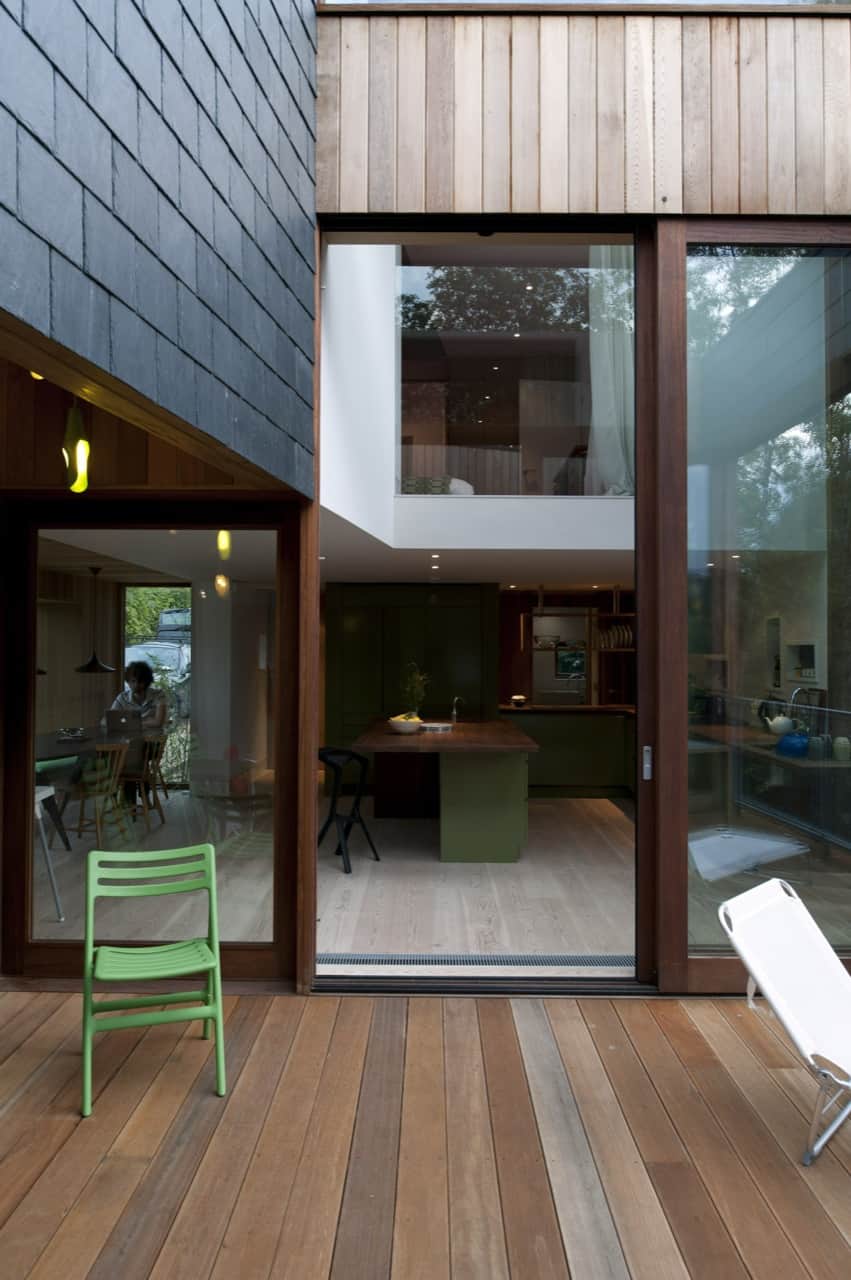 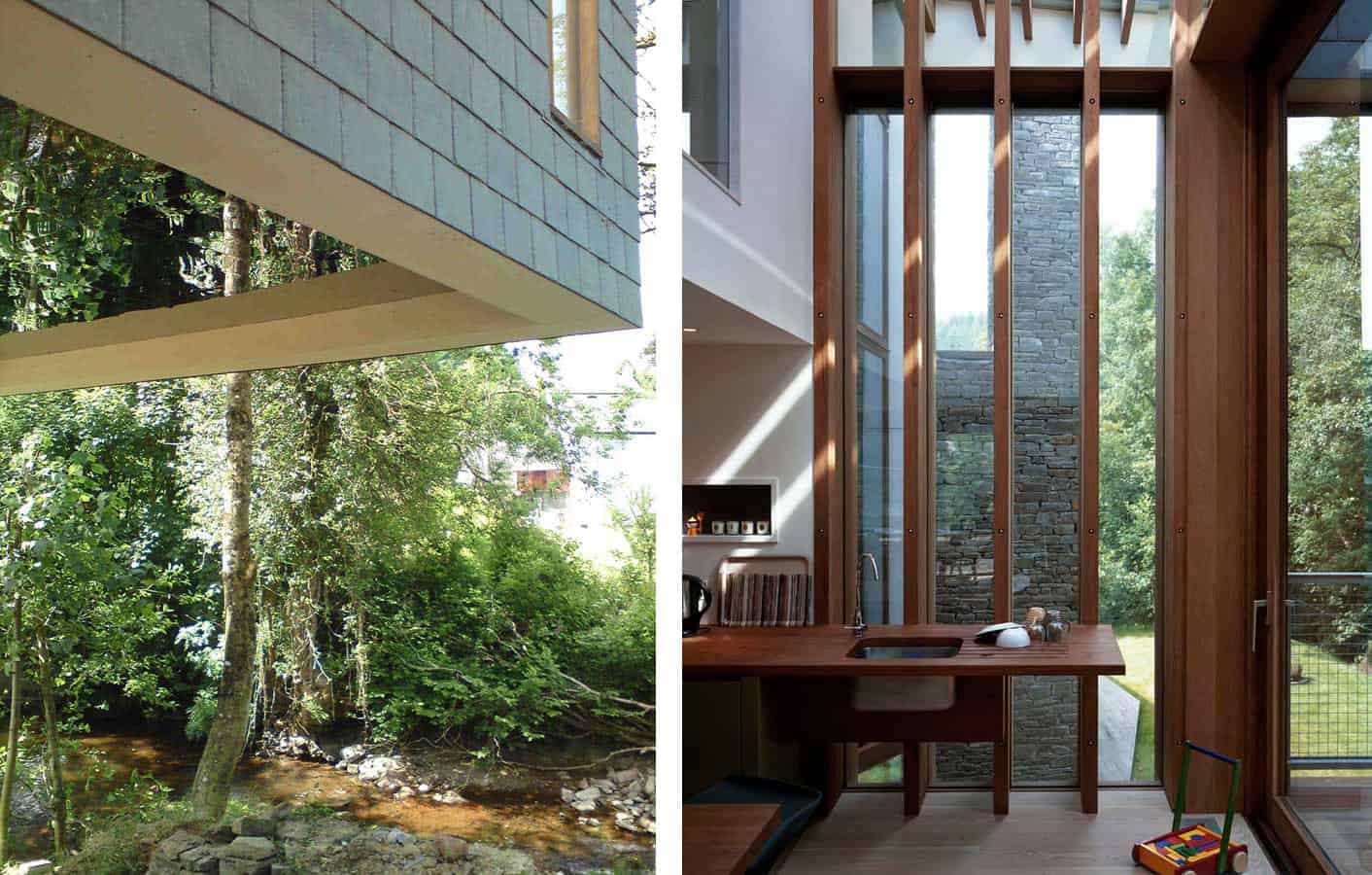 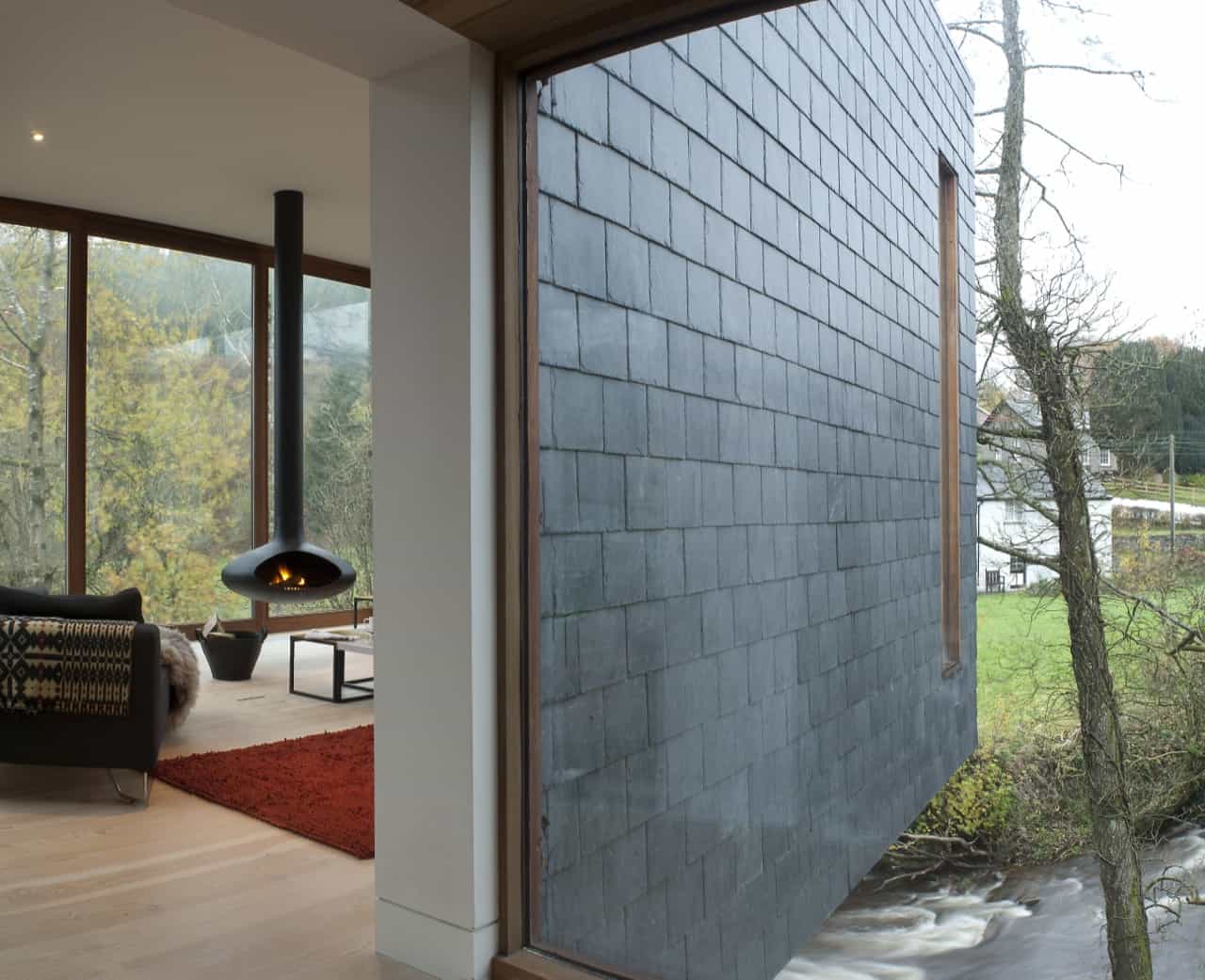 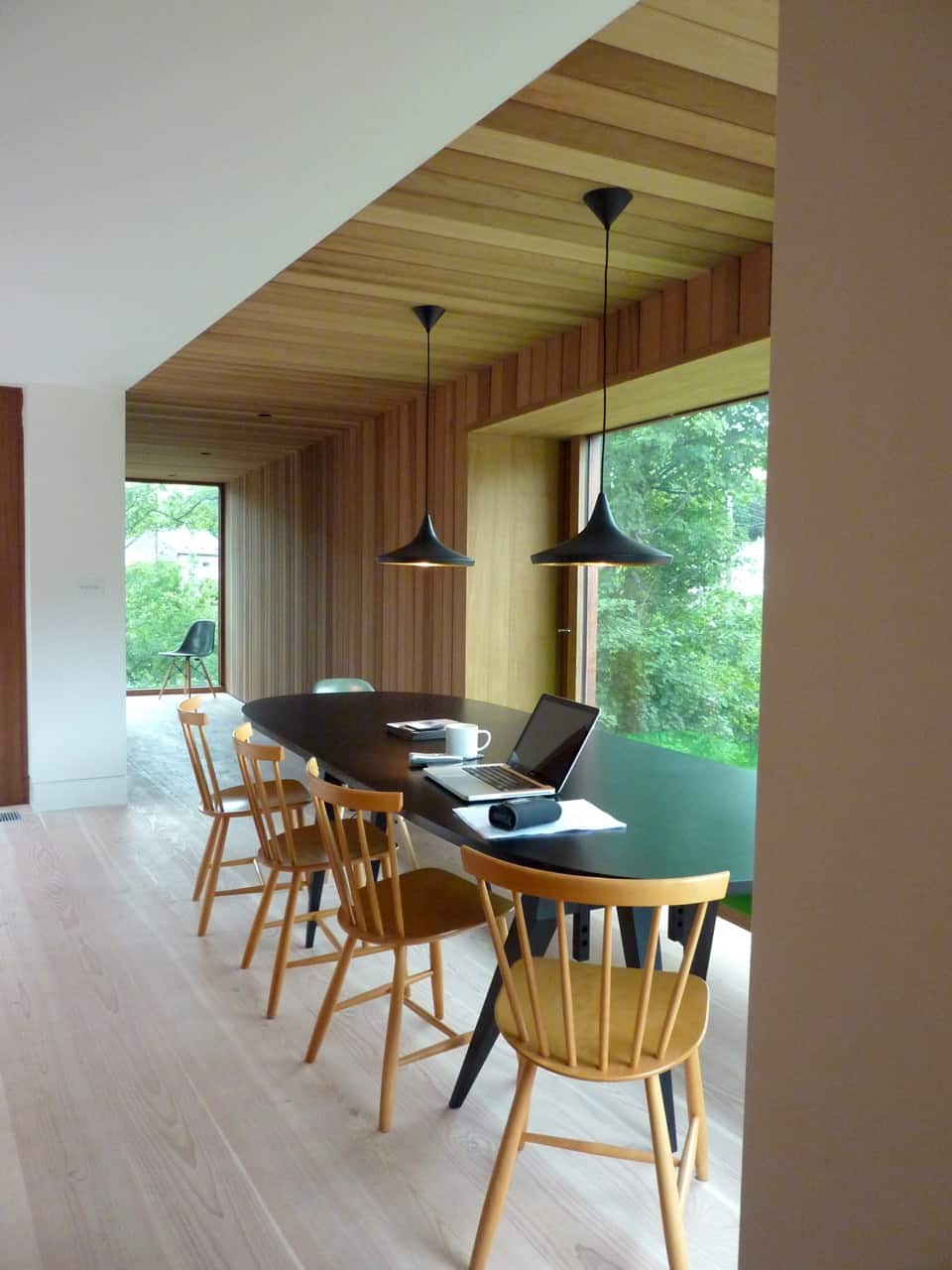 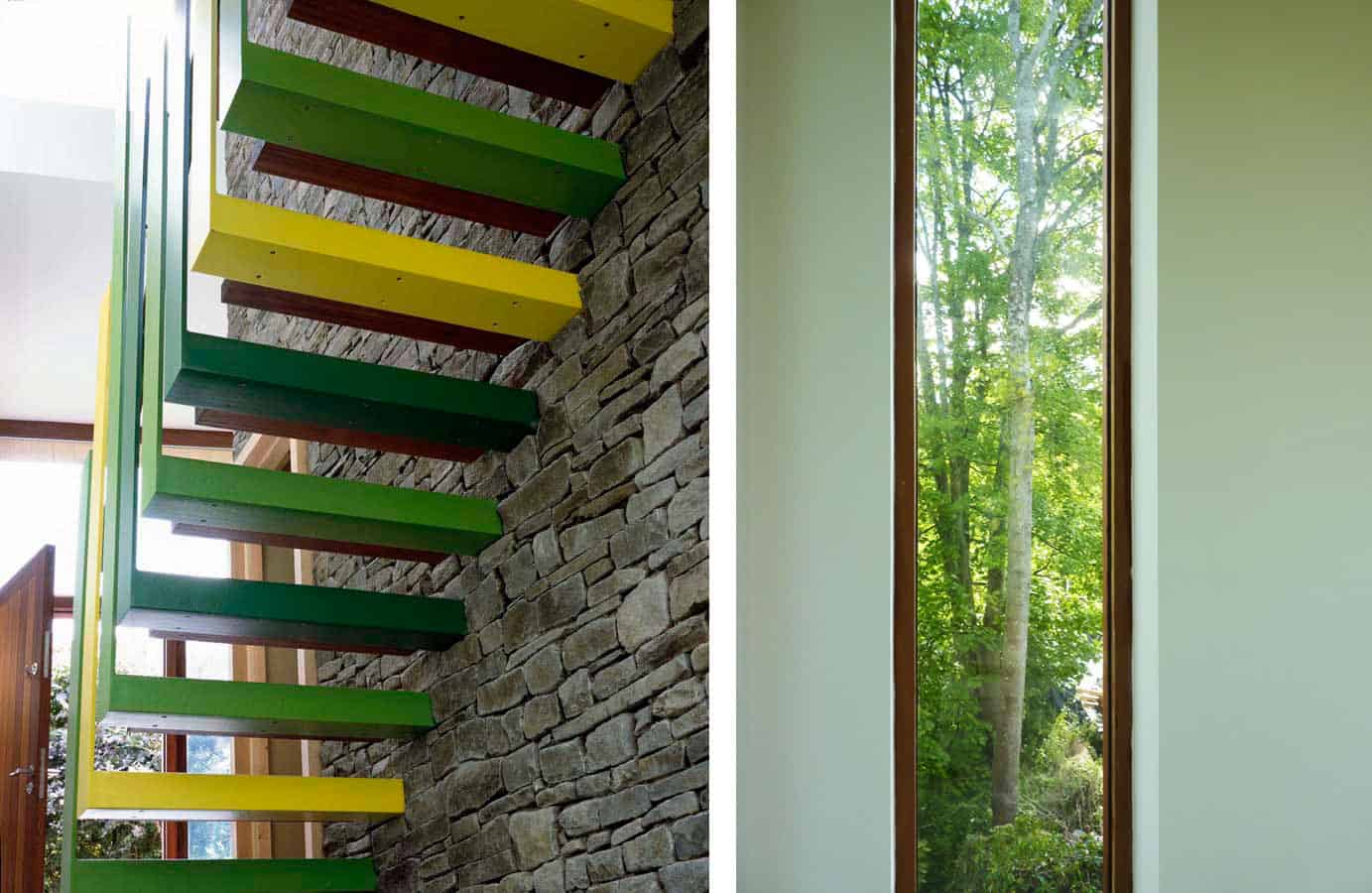 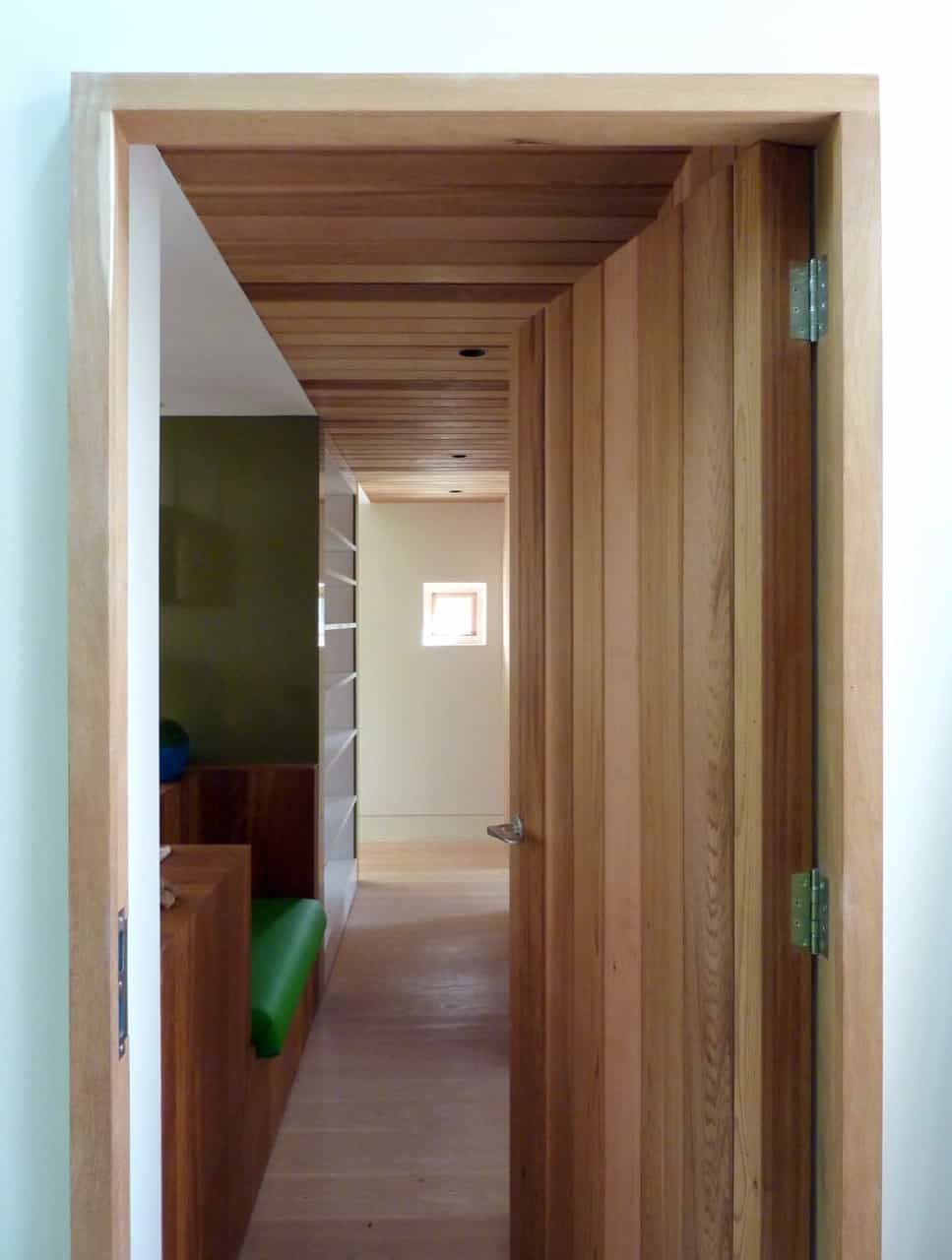 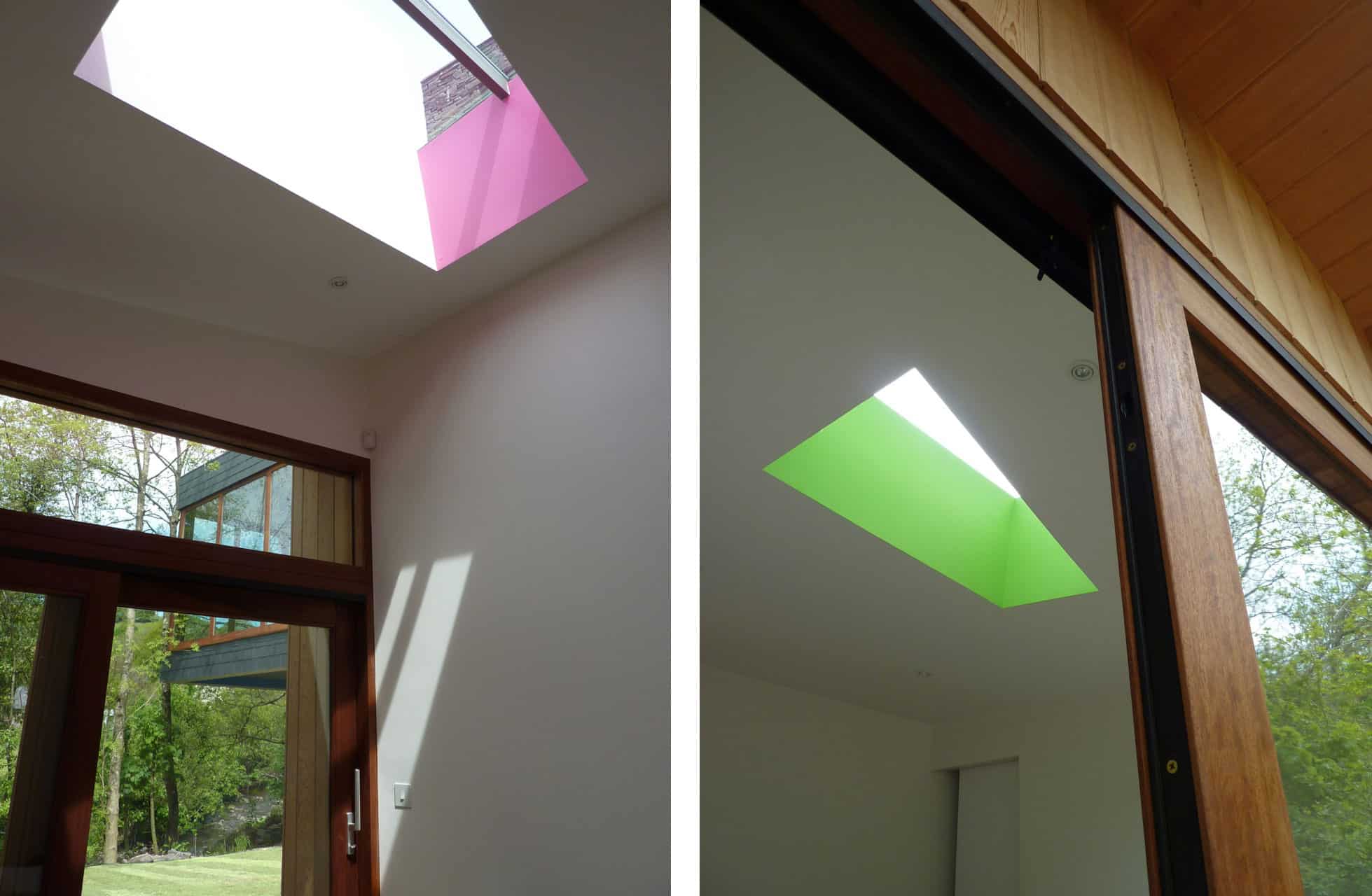 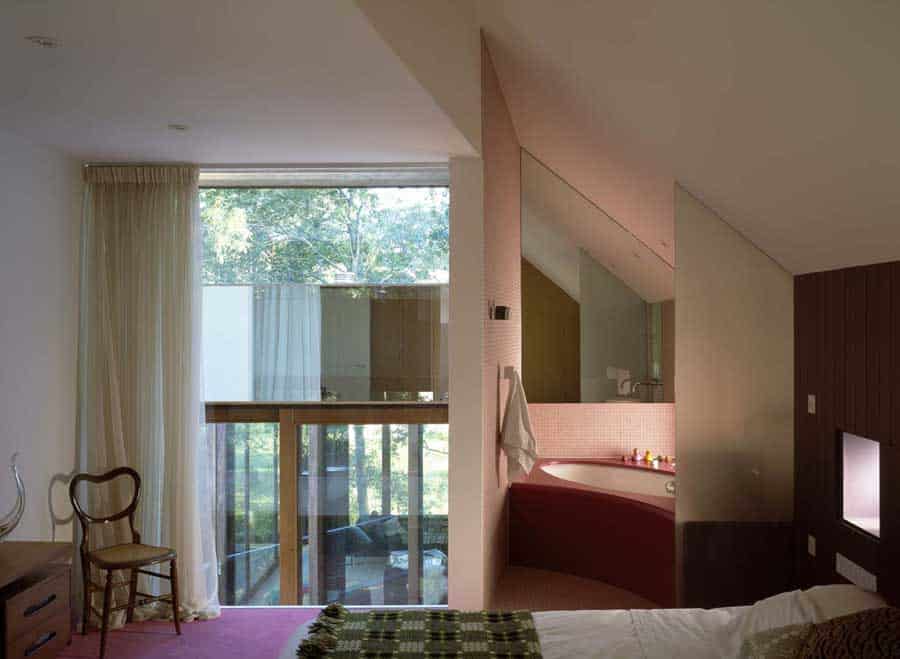 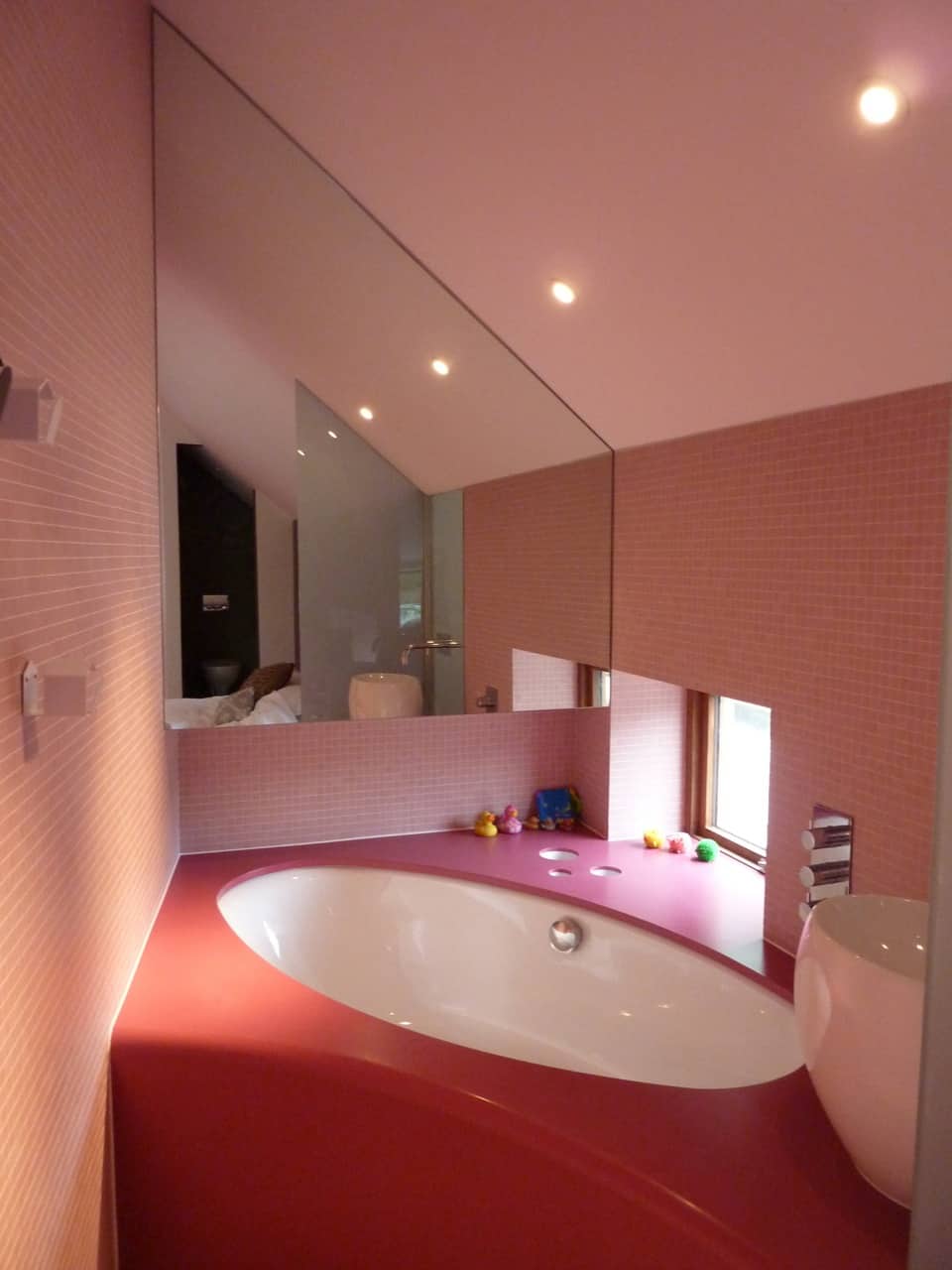 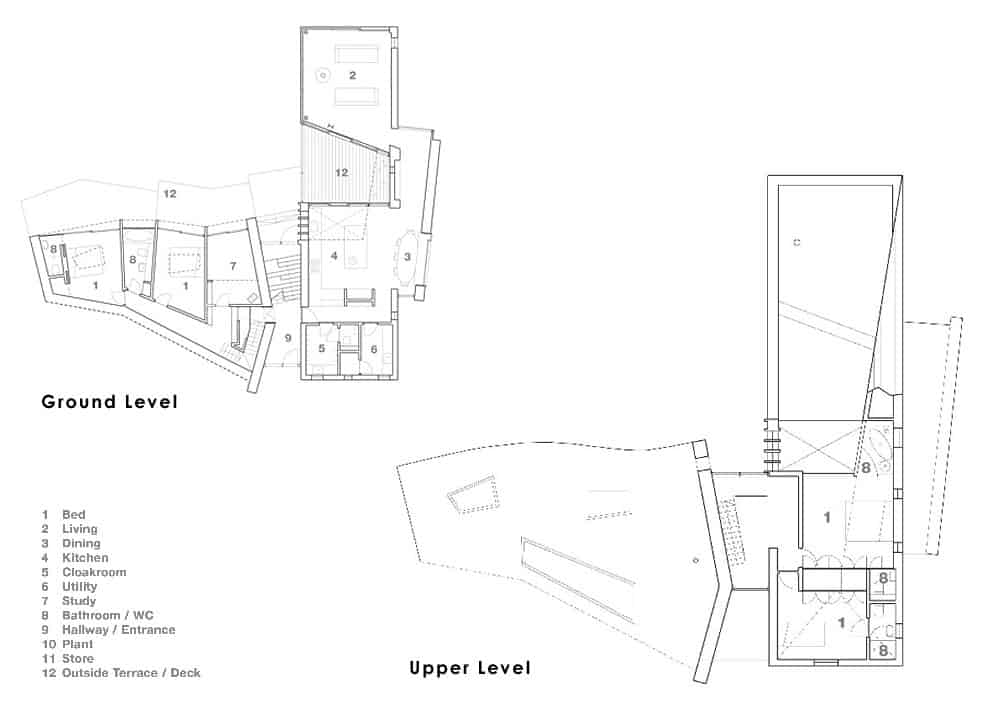 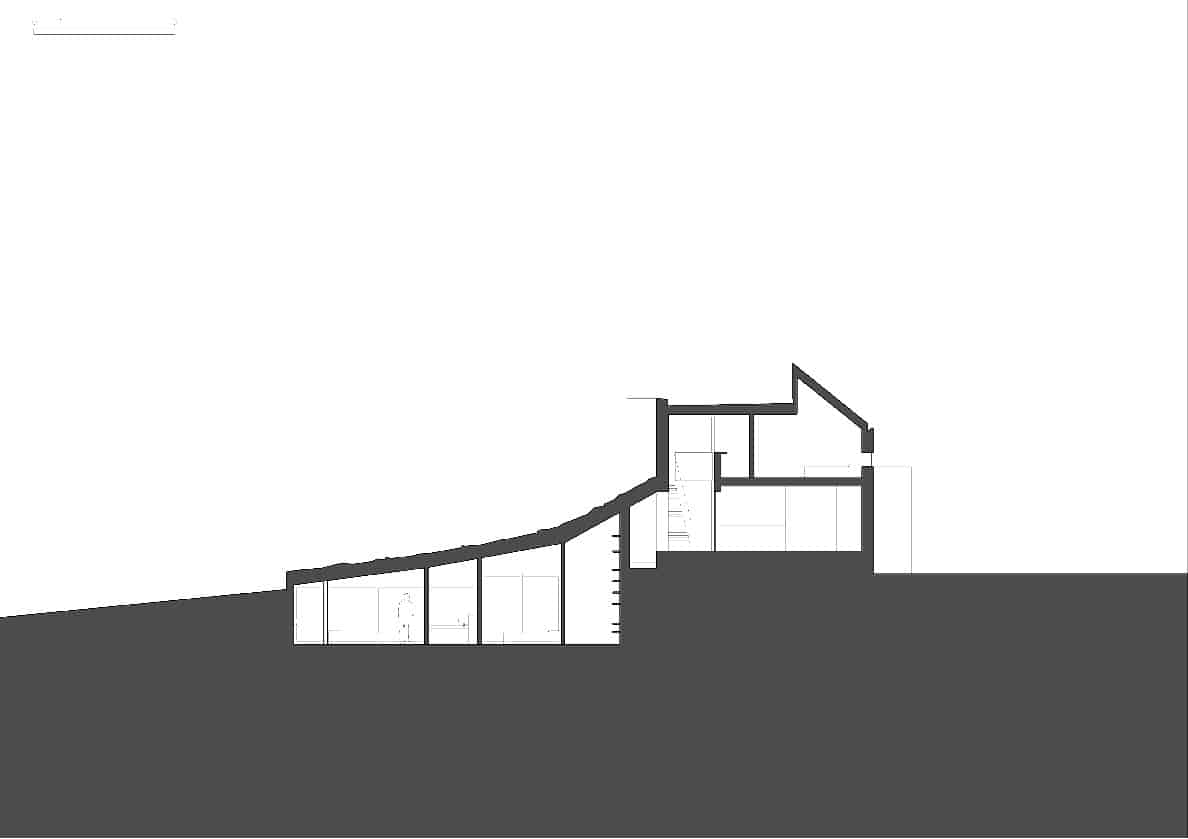 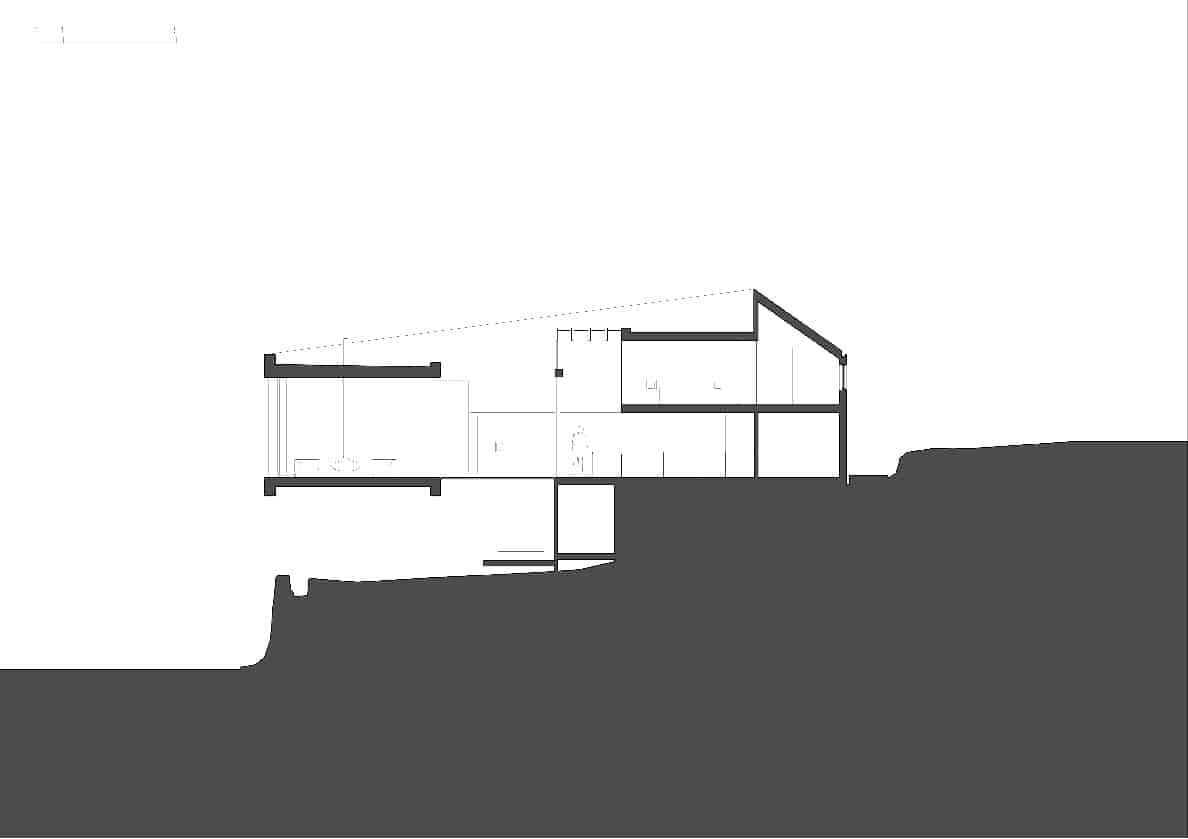 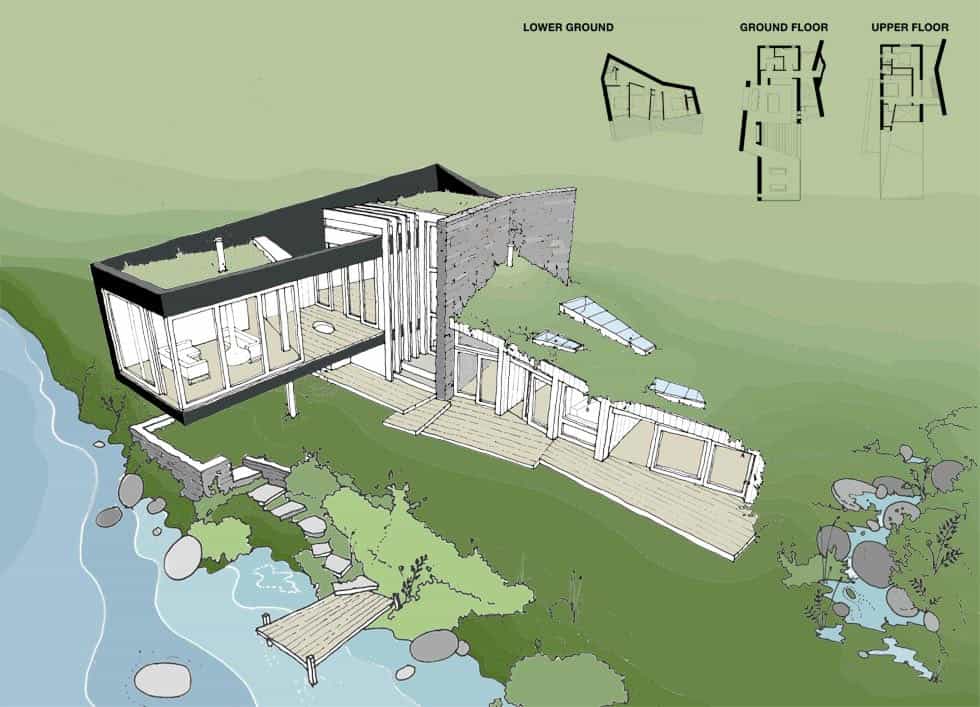 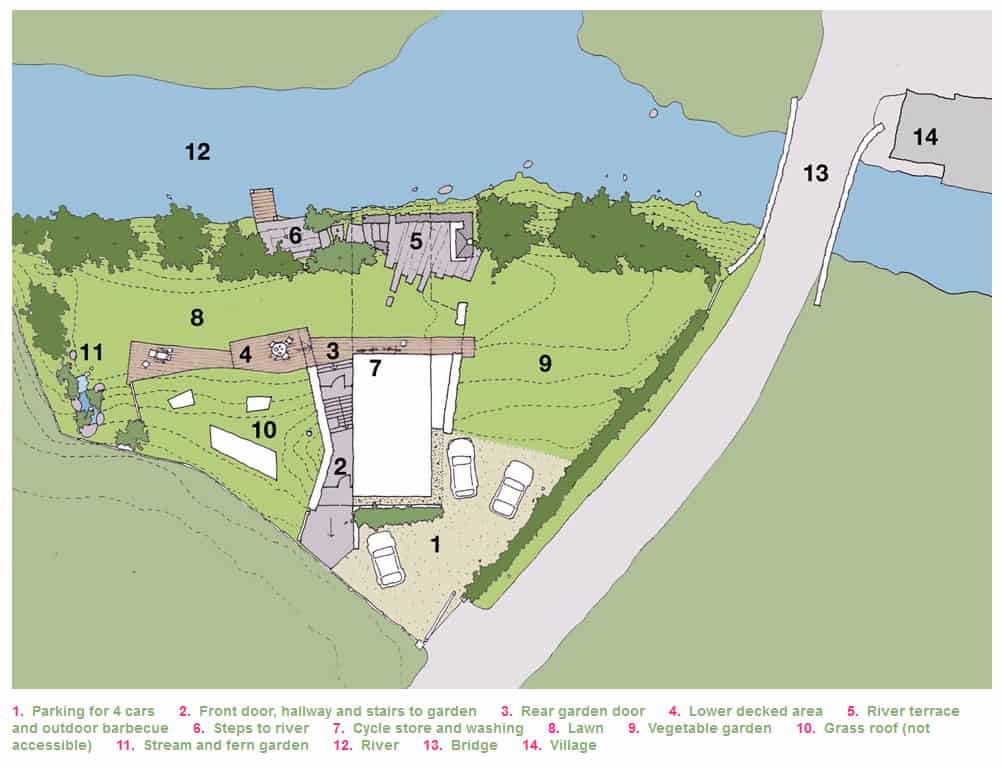 Completed in 2010, the 2,400 square foot four bedroom residence is perched above a valley river close to the Brecon Beacons National Park in South Wales.

The property is available as a vacation home and can be booked all year round.

“The Site and Local Distinctiveness

The site is quite unique, sloping down to the confluence of two rivers, Ysgir Fach and Ysgir Fawr, that run across the full length of the property. It is in the centre of a small hamlet, Pontfaen, which is just outside the Brecon Beacons national park. The site was effectively brownfield as historically it housed a light industrial premises, although this had long been cleared leaving little evidence of its past life other than some small ruins and a mill race. The river and bank is a Site of Special Scientific Interest and was, and still is, completely wild and undeveloped with a number of mature oak, ash and beech trees.

Complexity of the Brief and our Design Approach

Ty-Hedfan, meaning ‘hovering (flying) house’, directly responds to the complexities offered by the site. There are two principal constraints, which we turned into opportunities – the steeply sloping topography and the no build zone which included all land within 7m of the river. One wing of the building starts off in a seemingly straightforward manner but then proceeds to cantilever over the river bank and in amongst the trees, becoming lighter and more open and seemingly ‘hovering’ over the river. The other wing of the building is sunk into the slope of the site, with a green roof over, and full height glazing looking out over a decked riverside lawn. Irregular shaped rooflights over this wing drop extra light into this area and are detailed as wooden cattle troughs in a field.

Other brief complexities were the orientation of the site and proximity of adjoining neighbours. North is towards the river whilst south is towards the view of adjoining properties that we wanted to provide screening from. This challenge we met through top lit double height spaces over the main kitchen, courtyard and entrance hall bringing indirect south light in to the heart of the house. Windows do punctuate the south facing aspect but they are smaller and selective framing specific views of the hills and garden and cutting out neighbours properties.

Social constraints include the dichotomy of creating an intimate practical house for a family of three, whilst also being able to accommodate larger numbers of people when family and friends visit this alluring rural escape. The two wing design approach which, on the one hand developed, from the site constraints, also responds to these social needs providing a secondary guest wing which can be closed off and not heated when only the immediate family is present.

The material palette takes as its cue from the local vernacular context, but then details these materials in a more unusual manner. The cantilevered wing is a crisp slate clad box with hidden guttering and faceted pitched roof which gradually transforms into a hardwood framed glass living room hung over the river. Two screen walls in local drystone soften the hard geometric slate form, but then become monolithic 9m high features from the river side which have a practical benefit by preventing overlooking from the higher neighbouring properties. In order to lighten the underside of the building, the entire soffit of the underside of the living room is mirrored.

Internally, the finishes follow from the exterior treatment but are given a softer edge as you move further into the building. The triple height hallway is treated almost as a semi external space, with slate floor, drystone walls and a cantilevered steel stair. The remainder of the ground floor has extra wide board Douglas Fir flooring, cedar clad walls and colourful lacquered kitchen with hardwood worktops, with utility areas having Walton natural linoleum flooring. The bedroom areas have bright pink carpet with mosaic tile bathrooms and wetroom areas.

Apart from the creation of a small riverside lawn area and some raised planting beds, the landscaping around the house aims to be as light touch as possible creating the appearance from the river of a house lost in amongst a wild setting. A smaller stream runs across the site and has been encouraged to form pools and wetland areas, before finally falling over rocks down the steep river bank and into the main river.

The site when purchased had outline consent for a ‘traditional cottage style dwelling’. A number of prospective buyers had looked to build such a house but found the site constraints: steep, sloping site, trees and proximity of river bank too difficult to place a traditional two storey house on the site. We knew we wanted to design a house that broke with the cottage tradition and we found Powys County Council, the planning authority, to be broadly supportive of our proposals. However the unusual nature of the design and site meant we submitted an extremely thorough set of information for the planning application including a design report, ecological survey and flood risk assessment. Neighbours felt comfortable with our interpretation of the local vernacular and the low lying house form hugging the sloping site and we were able to obtain full plans consent within the 8 week statutory period.

The budget was tight and had to deliver an end product for a price below the resultant market value including the site costs. The overall construction budget was consequently set at £550,000, which resulted in a rate of £2400/m2. This was a challenge owing to the novel building form and need for a steel frame and retaining structures. Detailed design took approximately 6 months and the project was tendered in a traditional manner using a JCT ICT05 contract. It was initially programmed to take 1 year on site, but this was extended to 2 years owing to the loss of the first contractor to insolvency at around the time of the credit crisis in 2008. Both contractors were local firms and used local craftsmen on site, including a stonemason who completed much of the stonework and turned out to be our neighbour on the other side of the river!

Because of the need to cantilever the ground wing, a steel frame was adopted for this element, with timber framed wall, floor and roof infill structures. The steel frame also enabled us to easily and completely open up the living room on the west side to give maximum glazing over the river and lower lawn. For the lower ground wing, a cost effective method of creating the retaining structure was required, and this was eventually detailed as a twin skin of blockwork with concrete infill in staged pours – care was needed here to detail the buildup so as to not isolate the building from the useful thermal mass of the ground. The drystone flanking screen walls were constructed in a similar way, and then faced with the random course local stone, being tied back to the block/concrete structure.”

Photos by: Tim Brotherton and courtesy of Featherstone Young
Via ArchDaily, e-architect