Athens-based studio KLab Architects has recently redesigned the 13 Cocoon Suites of the Hotel Andronikos on Mykonos Island in Greece. 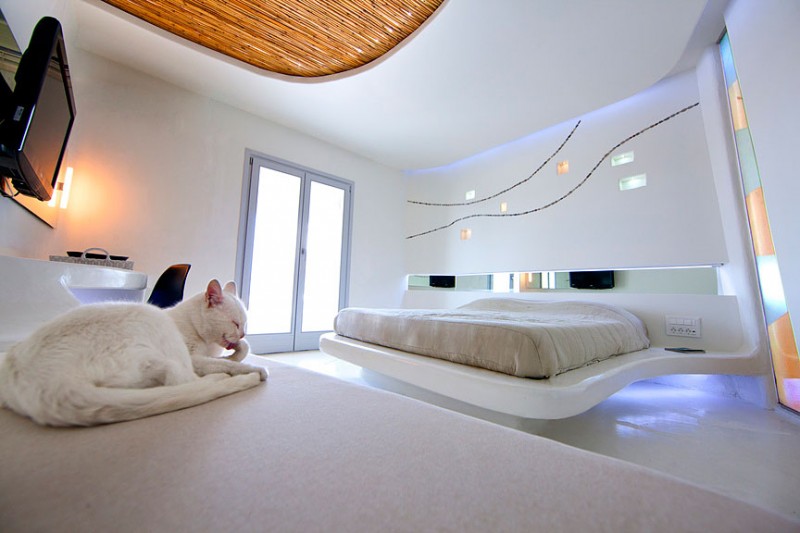 “Mykonos is one of most famous Greek islands with a population of 10000 people that rises to 50000 people during summertime. Mykonos has a unique natural environment full with amazing beaches, rocky hills and treeless desert like landscape, always in relation to the sea. Vernacular architecture is also unique in Mykonos. Organic whitewashed cubes with rounded edges, curved walls that divide the landscape, paved narrow alleys are some of the endless characteristics of Mykonian architecture that has been evolved through centuries to resist in hostile climatic conditions as very strong winds, drought, intense sunlight and humidity.

A modern interpretation of vernacular cycladic architecture was used into the redesigns of this hotel in Mykonos that was built in 1990. Through a total refurbishment that gradually will be developed, 13 rooms out of 57 have been redesigned by KLab architecture and refurbished following the principles of purity, simplicity, fluidity and surprise. The room, conceived as a modern Mykonian room, uses forms and the essence of Mykonos.

The interior is a compact mass constructed of irregular unaligned walls, with a 3- dimensional feel to them as they are distorted built upwards and slanted inwards. The furniture is designed with the same idea where they seem to be attached to the walls themselves providing the user with the impression that the building is erupting from the island’s rocky land. Every element plays off one another. All the design was conceived as a low tech construction that the local builders using their so far knowledge would create something that would exceed their practice. Budget had to remain low but the feeling and the sense emerged from the room had to be the opposite. Our effort was to create a sexy but pure, a vibrant but calm, a modern but classic room that would compose all these juxtapositions and paradoxes offering to the user an overwhelming experience.

Plaster, bamboo canes, plasterboard, glass, pebbles, mirrors and cement based flooring were used in unconventional ways and combinations. Lighting the room was a game of light and shadow revealing the sculpting force of the space. Illumination is hidden most of the time and different lighting scenarios help to create depending the time the ambience the user like. Light creates a sense of serenity and intimacy coming through the bamboos, under the furniture, through the reflections of the polygonal mirror.”

Into the Light Hotel by A31