43 years after its orginal construction and under new ownership, Record House, located in Owings Mills, Maryland, USA, was due for a facelift.

David Jameson Architect revamped this 1969 award winner in 2010 while preserving the integrity of its original design. 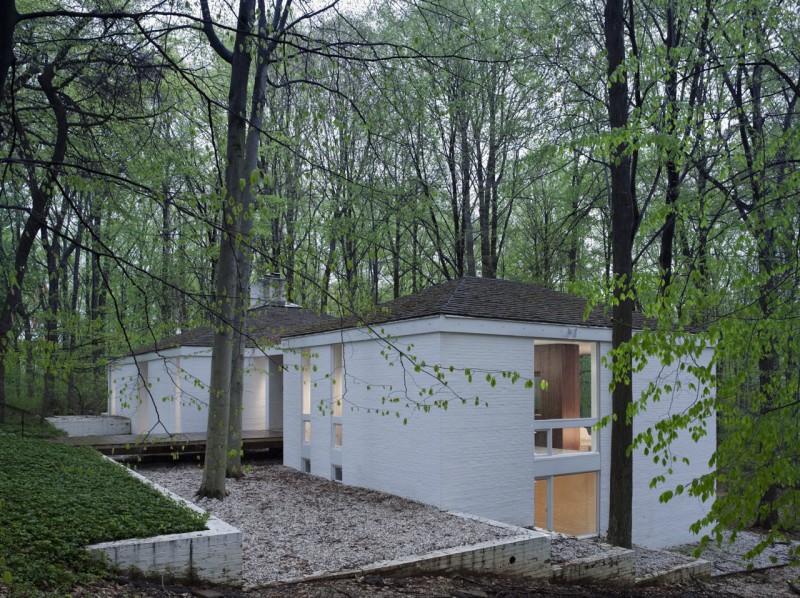 “Four decades after their project was featured in the 1969 Record Houses issue of Architectural Record, the owners sold the house to a young couple. A condition of the sale was that the new owners would respect the character of the project, yet be able to revisit and alter the contained quality of the interior rooms to create a continuous living space visually connected to the woodland site.

An analysis of the existing structure revealed ordering devices through which the new work could be understood.

A truss roof system allowed interior walls to be eradicated, yielding a condition of an unencumbered public and private pavilion linked together by a glass entry node. Floor to ceiling window apertures relating the pavilions could not be experienced within the original floor plan.

Registering the new work to the existing house is a conceptual allee of walnut casework. The casework weaves together and provides clarity to the various living areas. The quarter sawn casework and flat sawn flooring employ walnut in a Chiascuro manner, creating bold contrasts to the existing white painted brick walls and plaster ceiling. Corian casework elements are positioned as kitchen, mudroom, and bath objects, further juxtaposing a smoothness to the textural brick and plaster.

The purity of the original brick fireplace and skylight ring at the center of the house is exposed and left uninterrupted, allowing for additional connection to the site.”

One Comment to Record House Revisited by David Jameson Architect