House in Bohumilec by Mimosa Architekti

This two story contemporary home is located at the edge of the village of Bohumilec in Czech Republic. 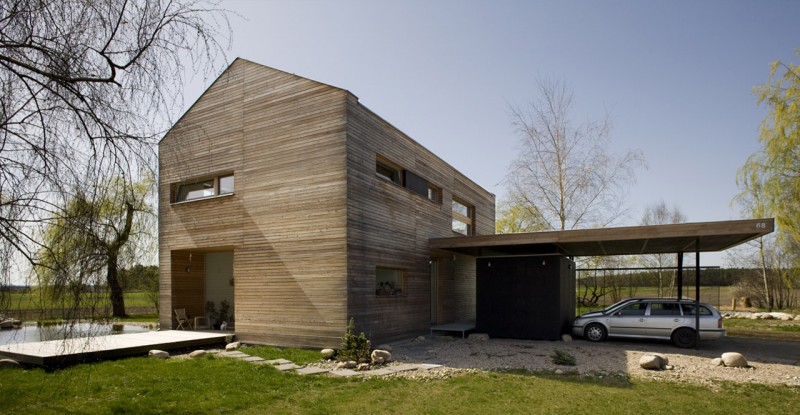 House in Bohumilec by Mimosa Architekti:

The project is a single-family house for a family of four in the outskirts of the small village Bohumileč in the Pardubice region. The volume solution of the house was inspired by the design of the rustic house with a saddle roof. Volume and material simplicity join the house with its natural and urban framework. The building “seeks to be” an unobtrusive, yet an expressive “resident” of the place.

The south orientation of the building along with the east-west direction of the view into the countryside defines the axis, which the ground plan of the house is based on. The east–west axis divides the house into the southern living and northern service wing. The building is embodied into a “ micro-world” of the lot at the end of the village. The lot is surrounded with a barrier of full-grown trees.

The ground floor involves an integrated space of the interconnected living room and the dining room. The kitchen and the staff workrooms adjoin that space from the north. The service centre staircase and, the entrance area are located on the northern front facade of the house. The rooms with a southern orientation and the staircase hall with the carrel with the view of the countryside, are all situated in the first floor, with the bathroom and the lavatory in the northern section.

House in the Woods by Claim

Northface House by Element Arkitekter AS