This modern residence is a 2012 project by Idis Turato that is located in Opatija, Croatia.

Characteristics of the site facilitated a power-play between the building and the landscape. 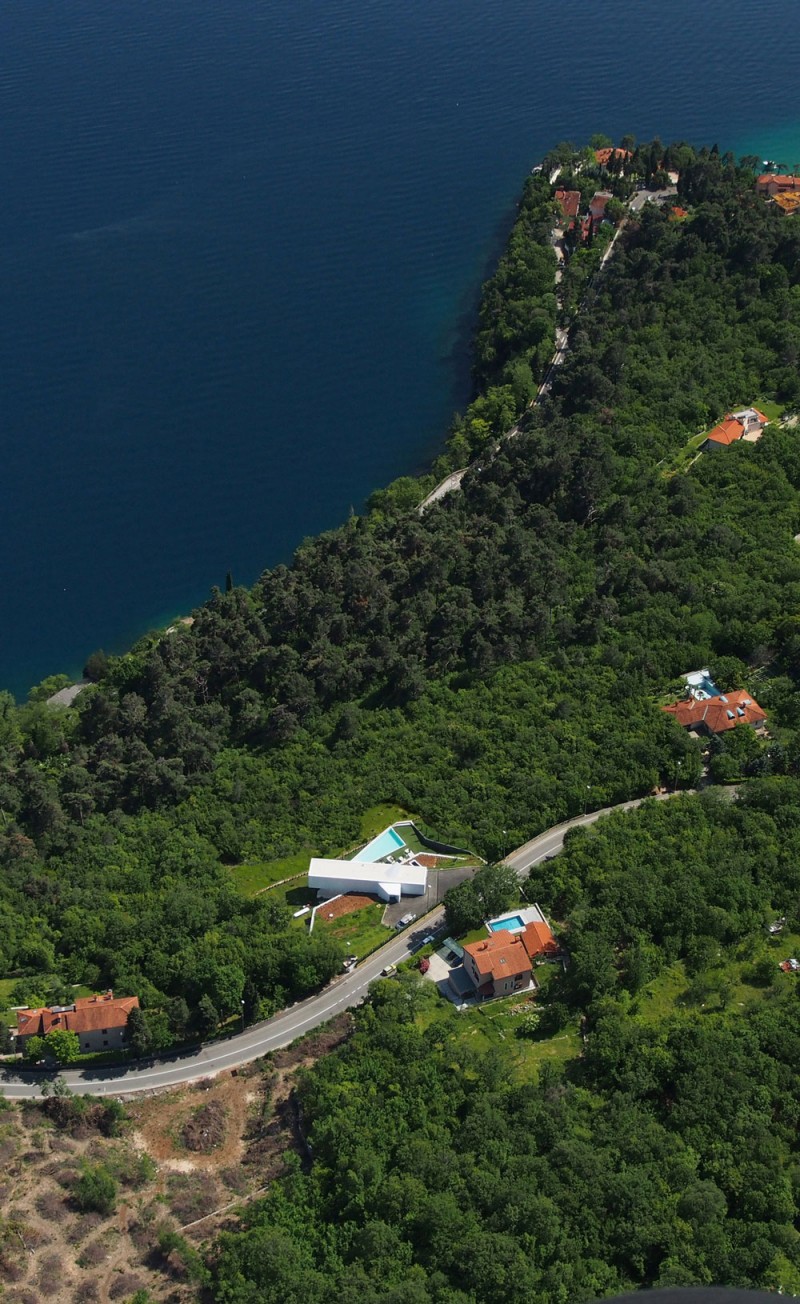 “The hinterland of the Opatija Riviera in Croatia is dotted with villas (built within a century and a half). Their upper, front side reveals nothing but entrances beyond which we can only imagine their spaciousness.

Their scale and relation to the bay are entirely dependent on the seafront slope (perhaps, it is the tension arising from the assumption of something hidden what gives the spatial frame of Opatija’s hinterland its appeal).

Although the Nest and Cave remains typologically and morphologically true to the surrounding space as a whole, it develops its “hidden” side through the dialectics of domination over and subordination to the landscape.

So, the house and the place it renders are not structured solely by the slope onto which they are built (as it is the case with most villas in Opatija).

Instead, it actively constructs the landscape and intertwines with it by laying down the ground level (landscape) and by placing on it an upper Object which hovers above as a displaced level.

Therefore, the house consists of an entrenched concrete bunker (the sleeping area) on which a steel spatial grid structure is placed and which elongates into a 17 meter long console.

Despite it being constructed within a reductive registry of functions, with only two structural elements and with its apparent division into the sleeping and living area, the house creates a wondrous, ever shifting experience and interspaces. This is achieved by a simple dislocation of the upper segment in relation to the lower one and by inscribing it into the depth of the parcel.

The dislocated upper part and its hypertrophic console express, by alternating the shadow and the hidden with openness and hospitality, the quintessential tension of a Mediterranean house: the battle of the sun and the shadow.

The Nest and Cave house becomes a reinterpretation of its heritage by achieving a full form via projecting the Object (the shadow) and opening the void in the body (landscape).

The console leaves behind a shadow which (depending on the time of day) gives volume to the living area (“the heart of the house”, as the author calls it) and, by alternating the intersection of its axes (as much as the angle of the sun will allow it), it shifts around thus constantly creating yet another intimate area of the house.

Through its fenestration facing away from the road and surrounding structures and by carefully framing the landscape that penetrates and dictates the depth or flatness of the interior, the visually (and statically) dominant white shape (the aluminum covered steel grid) invites the Kvarner Bay inside.

Idis Turato, the architect, having to face such a dominant landscape, attempts to explain his raison d’être behind it in the words of Buckminster Fuller,: “(…) The main question is how to control the space compassed; and subsequently how to develop selective control of compassed space (…)“ How to simultaneously capture broadness, enable intimacy, while continuously standing on the edge in front of unobstructed views?

The Object dominates over the landscape, while the landscape creates the interiority of the object – a continuous interchange between the frame and what is being framed, the House on the Edge.

Its strict geometry and sculptural attributes (the architect’s control) provide a necessary foundation for a future narrative (its alternations depending on the viewpoint). They also maintain spatial relations just accurately enough to assure a possibility of an unforeseen event (such as freedom in linearity of enfilade).

The view of the house and the view from the house are in a constant clash of inclusion and exclusion. Beneath someone’s nest and cave we are able to observe the sculptural relationship between the landscape and the house (the other place).

On the other hand, when being inside it, we become beneficiaries of witnessing the subliminal beauty enabled by the controlled landscape frames- carefully planned axes and angles successfully separate the “initial resources from the final product”.

The control over a spatial frame allows for a “passionate uncertainties of thought”, regardless of whether we are the observers or the users and of which story we are telling.”

The Cave in Pilares by Greenfield

A Contemporary Home Made From Regional Materials in Tigre, Buenos Aires

House in Iporanga by Arthur Casas