The Das Stue Hotel in Berlin

The Das Stue Hotel is located in Berlin, Germany.

The hotel is hip and stylish, a bundle of textures and patterns resulting in a sophisticated and fun environment. 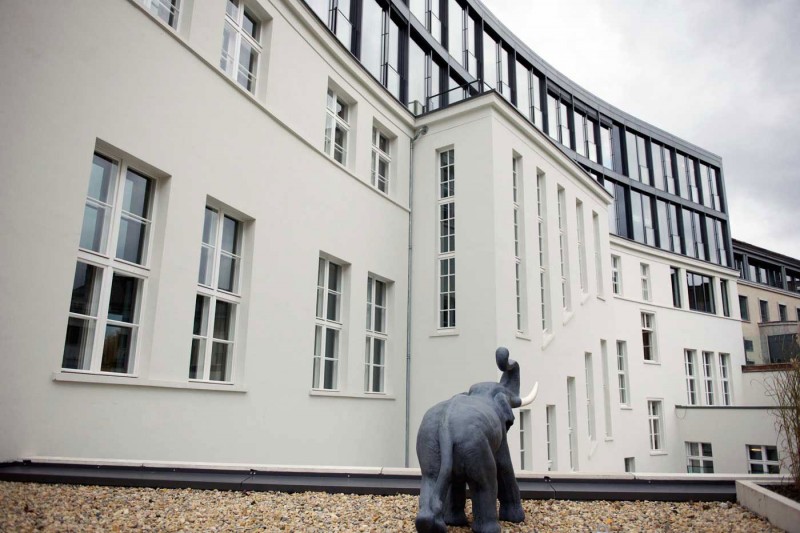 The Das Stue Hotel in Berlin:

“Das Stue is housed in the former Royal Danish Embassy, which was built in the 1930s. The neo-classical building was designed by architect Johann Emil Schaudt (1871-1957), who immortalized his architectural approach to Berlin’s cityscape with the Kaufhaus des Westens (KaDeWe) department store and the subway station at Rathaus Schöneberg. The elegance of his work, visible at Das Stue, is distinguished by a convex façade, following the arc of the road. Four unpretentious pairs of columns support the sublime balcony of the Bel Etage, where the Ambassador himself resided in days gone by.

Having been only slightly damaged in World War II, the building served as a consulate and the location of diplomatic representation for the Danish military in Germany until 1978. Between 1978 and 1987 the magnificent building was vacant, and subsequently used by the Deutsche Post, and later the Deutsche Telekom as an “executive academy”.

Today, the link between the structures’ historic existence and modern architecture is distinct right from the start. A glass porch in front of the 24-hour main reception, allows a glimpse into the inner workings of the Design Hotel. The eye wanders past the dual grand staircases, over the design of the contemporary bar, and finally rests on the vast panoramic façade overlooking the expanse of the Berlin Zoo.

The extension behind the grand main building the addition, designed by the Potsdam architect Annette Axthelm, completes the impressive fusion between old and new. The extension in the rear courtyard is designed with an innovative photo concrete surface covered with a historic flower pattern, offering an elegant counterpoint to the rough stone façade of the main structure.

“When I first visited Das Stue, I noticed the ostriches in the zoo and found this environment to be exceptional. I had a vision of a luxurious house in mind, one that combines quality, heritage and contemporary architecture with one another,” says Patricia Urquiola of her first impression of Das Stue. The result of her work is the formal evolution of this moment.

As the art director and designer of the public spaces, such as the restaurant and bar, it was her goal to share an intimate atmosphere with guests.

Patricia Urquiola plays with parquet floor patterns and natural materials, like wood and copper, combining these with a subtle retro style and colourful mood-enhancing carpets. She pampers guests with a collection of chairs, couches and cushions placed so as to create a cozy atmosphere, thereby enticing guests to stay a bit longer.

In the split fine dining area of the restaurant, she uses high quality materials that resonate with a demure luxury in th epart facing the Berlin Zoo. In the area connected to the open “show kitchen”, guests can sit under a light sculpture made of copper pots. She says: “This extraordinary location gives guests the feeling of sitting in a sophisticated pantry.” In contrast to this is the casual all-day dining area featuring large skylights that flood the room with natural daylight, radiant colours and eye-catching design.

For the creation of the areas in the historic part of Das Stue Patricia Urquiola proceeded with respect for the 1939 architecture of Emil Schaudt. “I wanted my work to reflect the voice and the austerity of the building.” Thus, the designer preserved the character of the grand staircase at the entrance and as a counterpoint created a small library with a warm, leisurely atmosphere.

ME London Hotel by Foster + Partners

Penthouse in Berlin by Ando Studio

A 19th-Century Home in Berlin Gets Revamped by asdfg Architekten