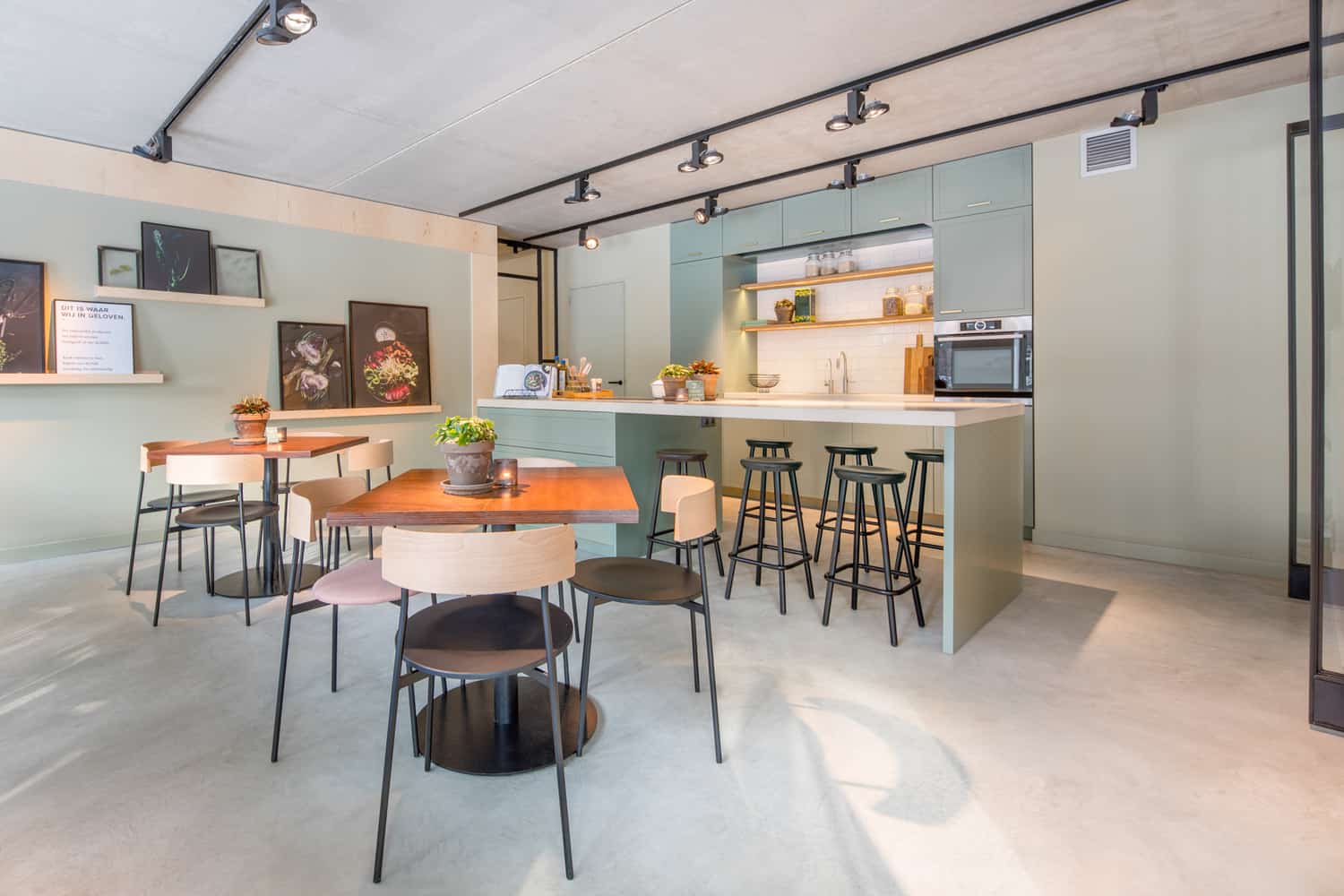 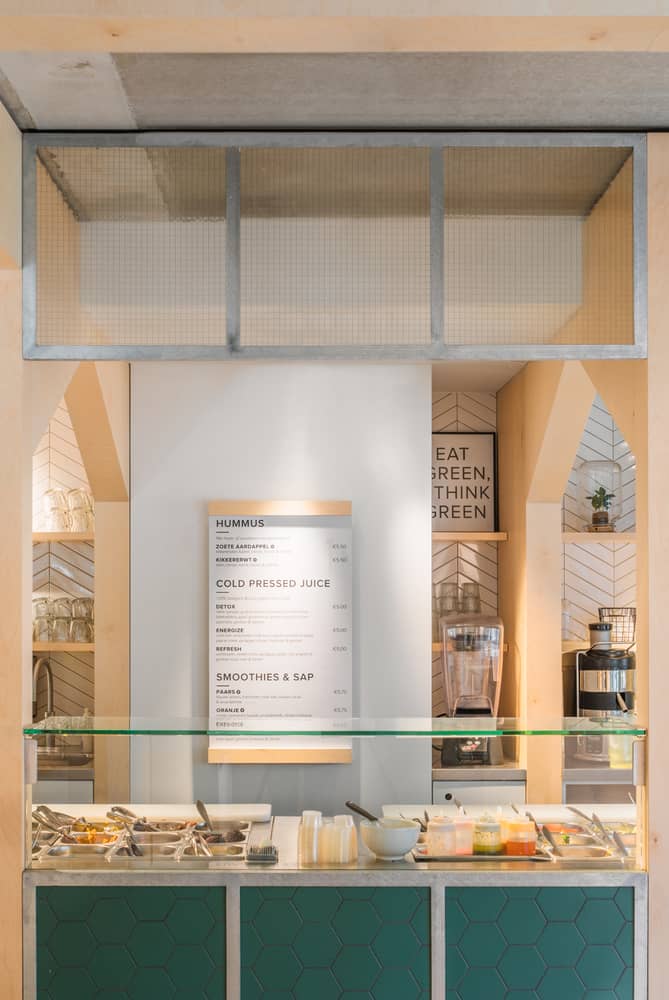 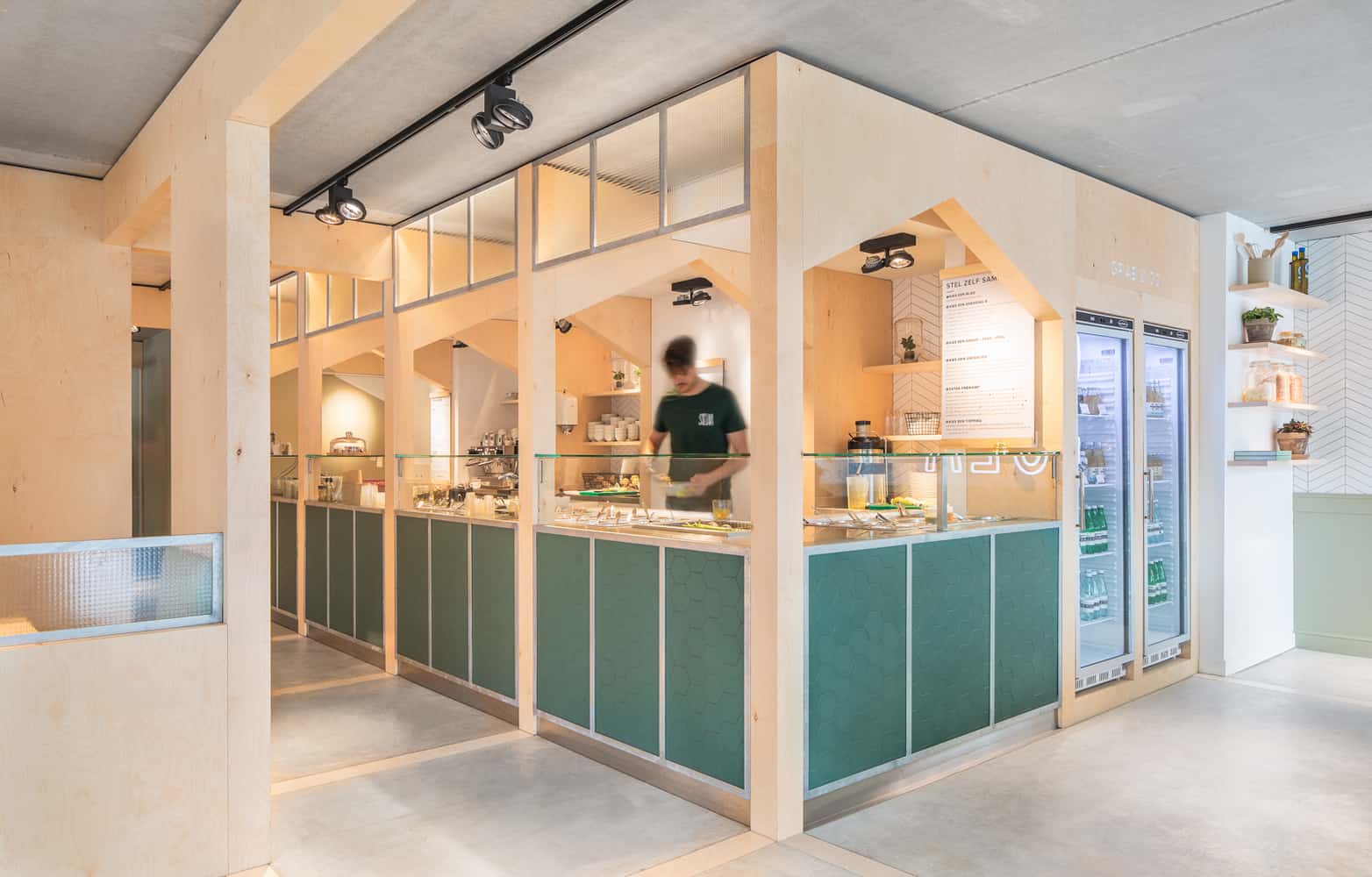 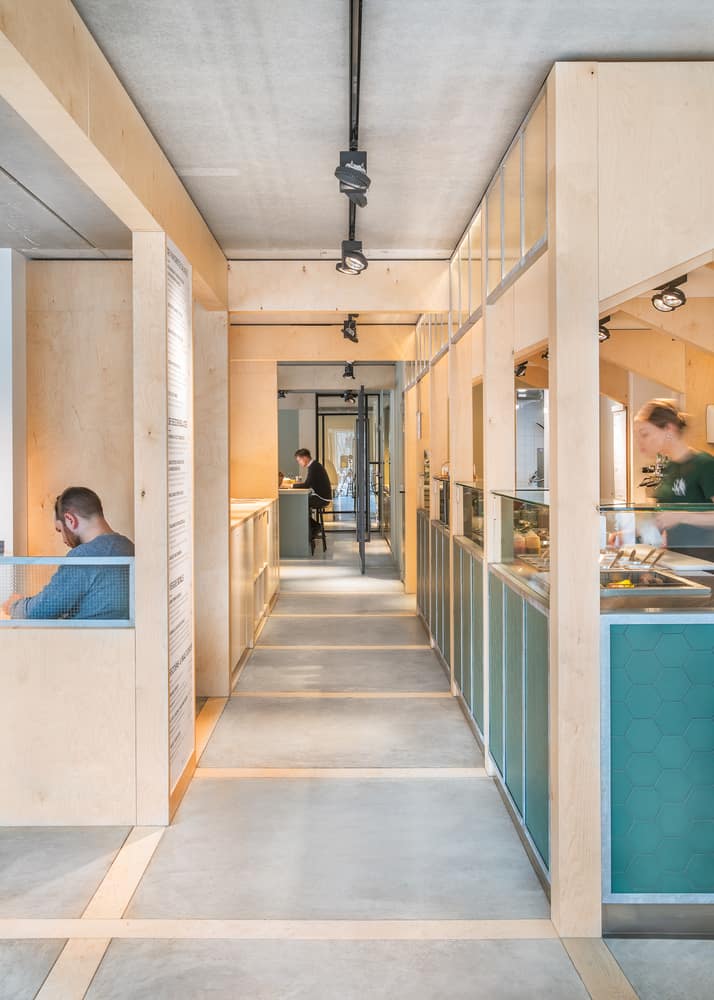 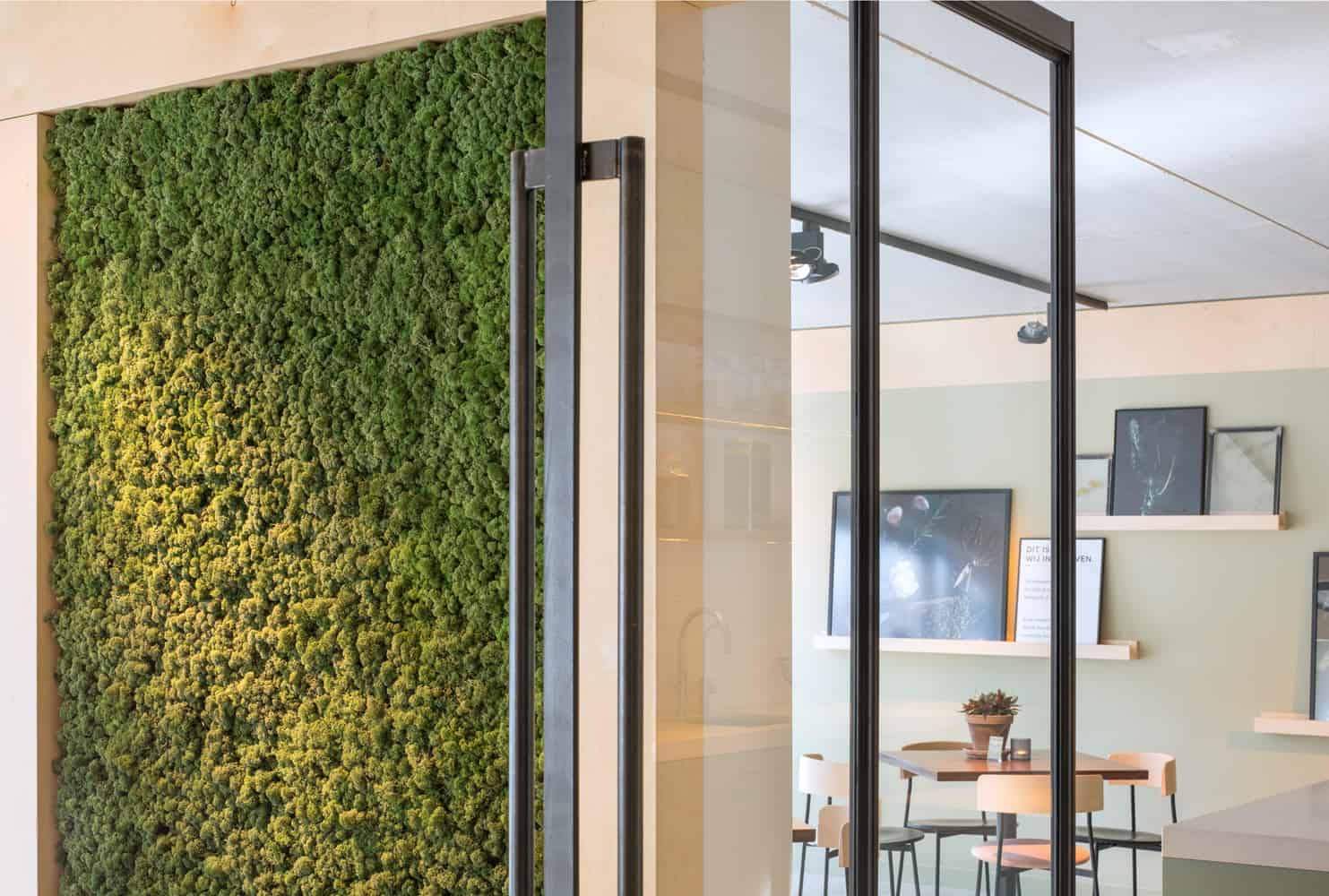 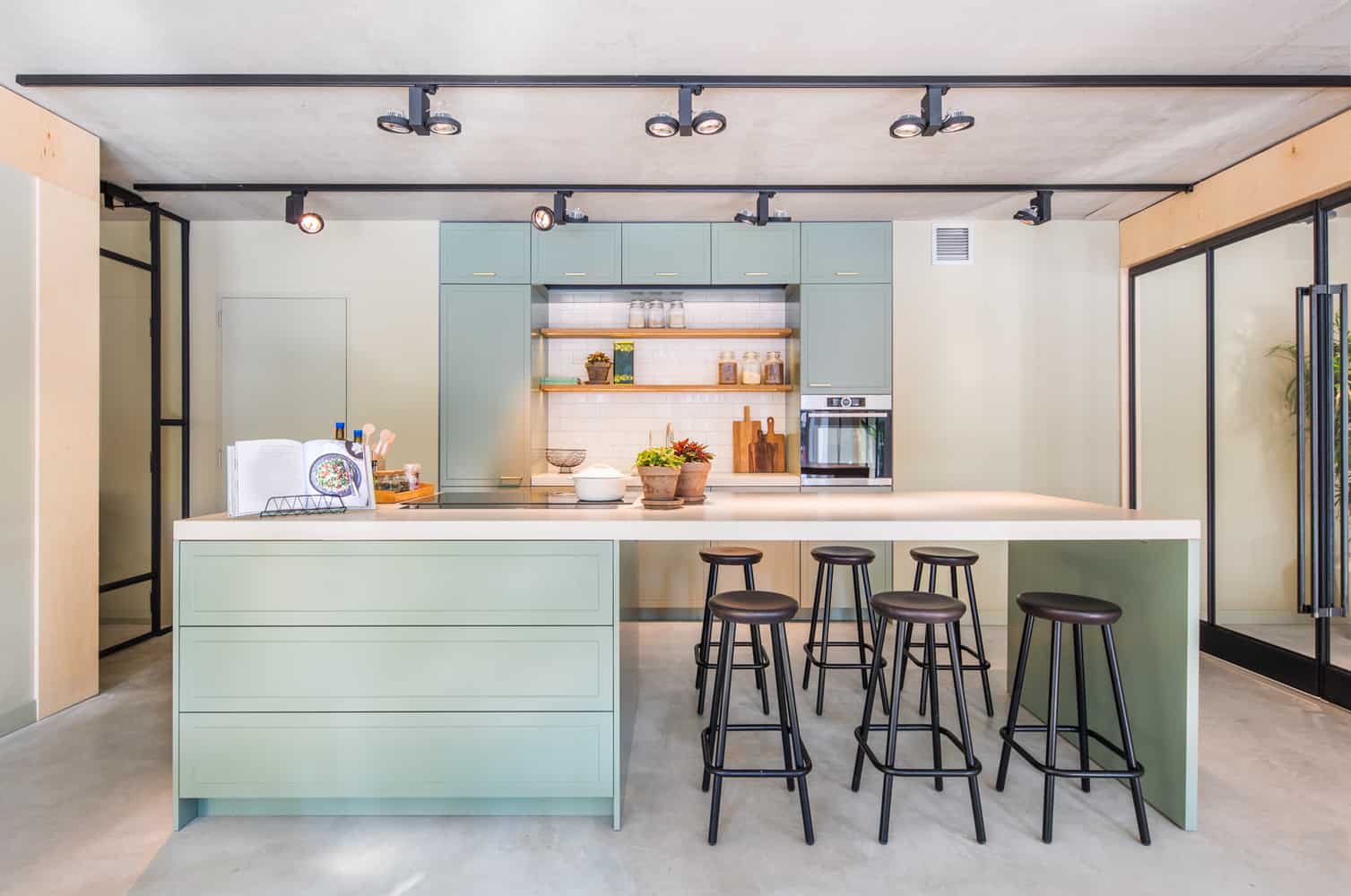 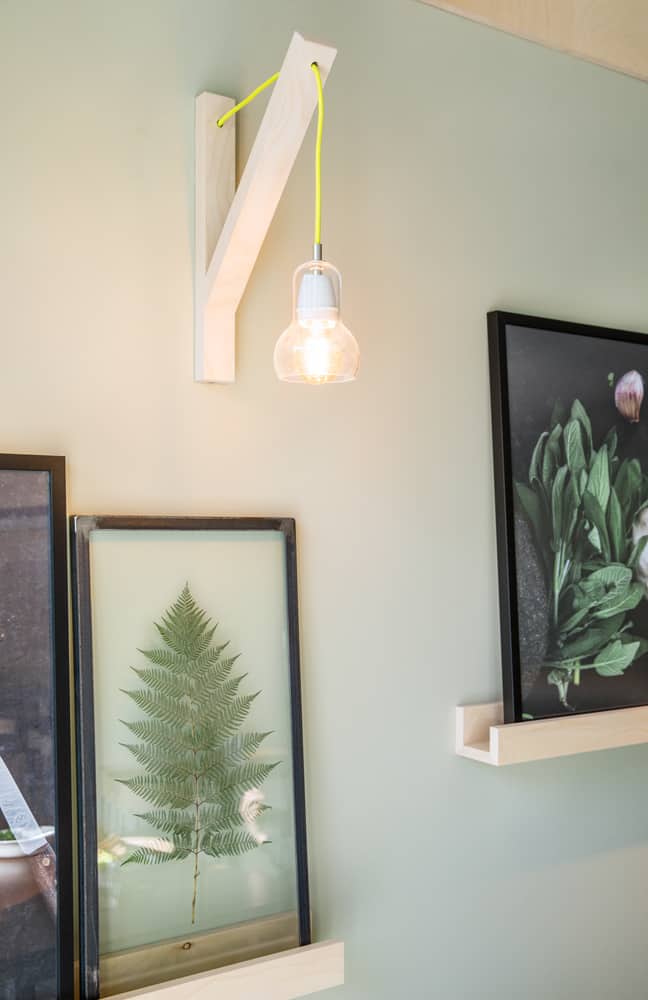 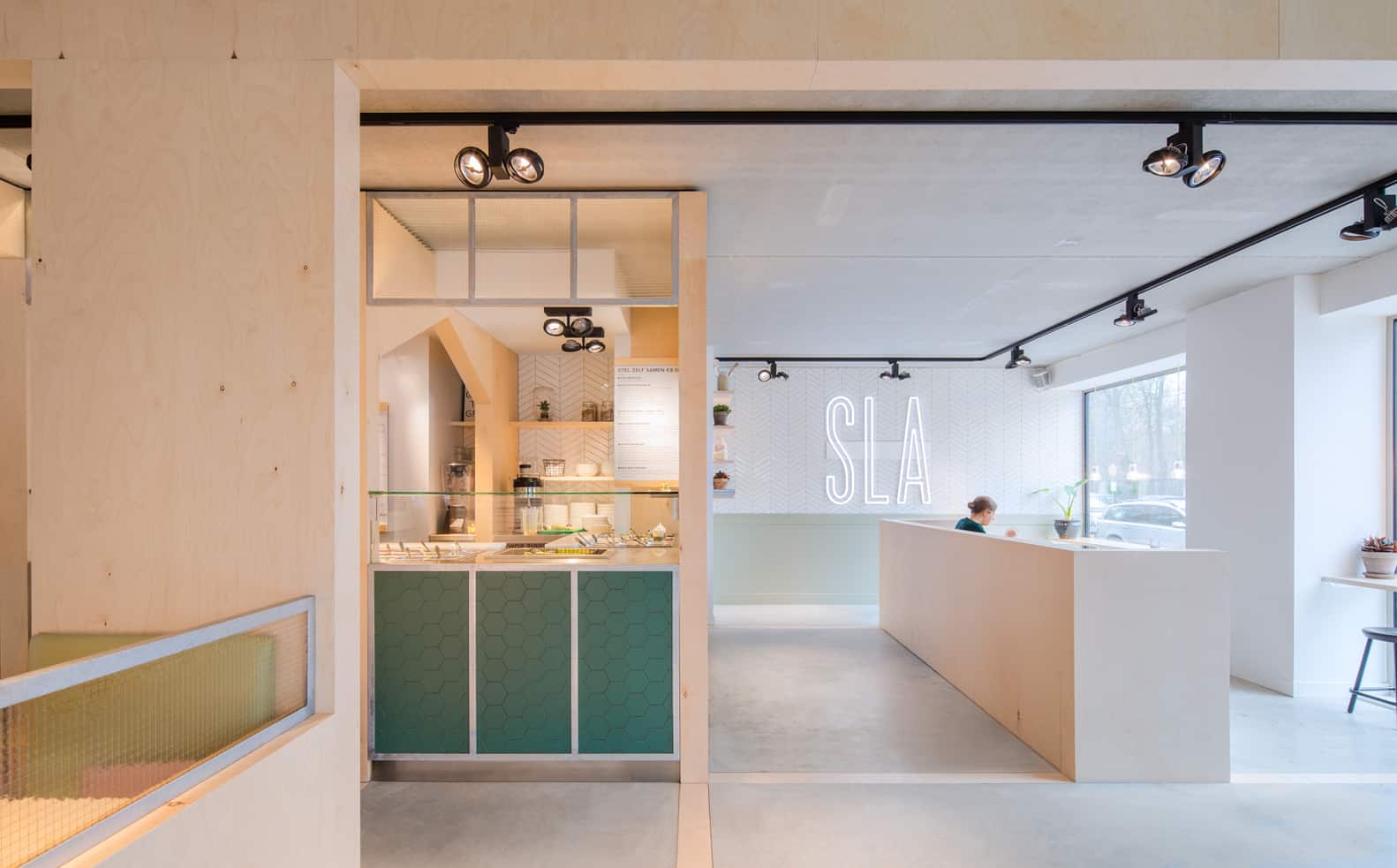 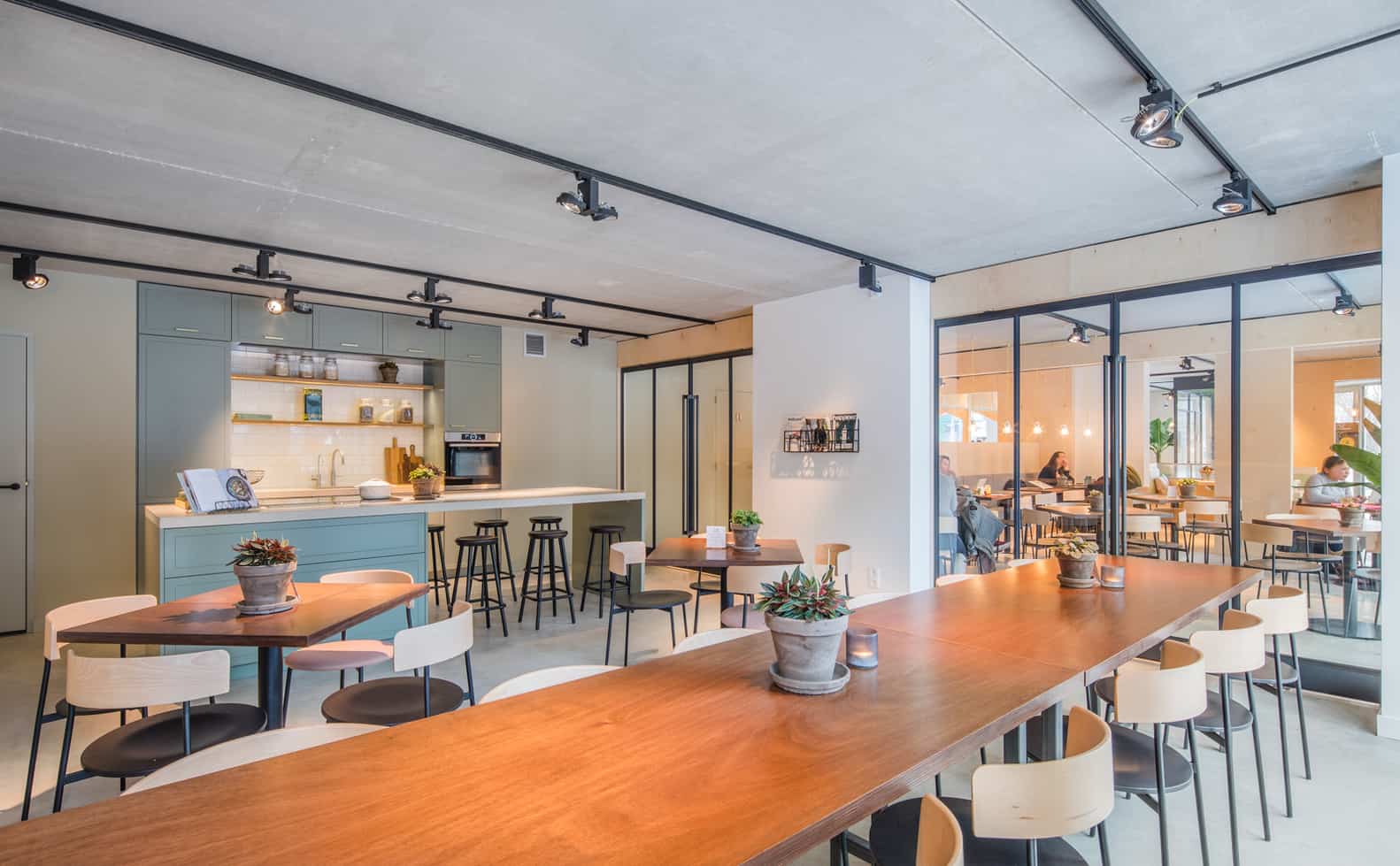 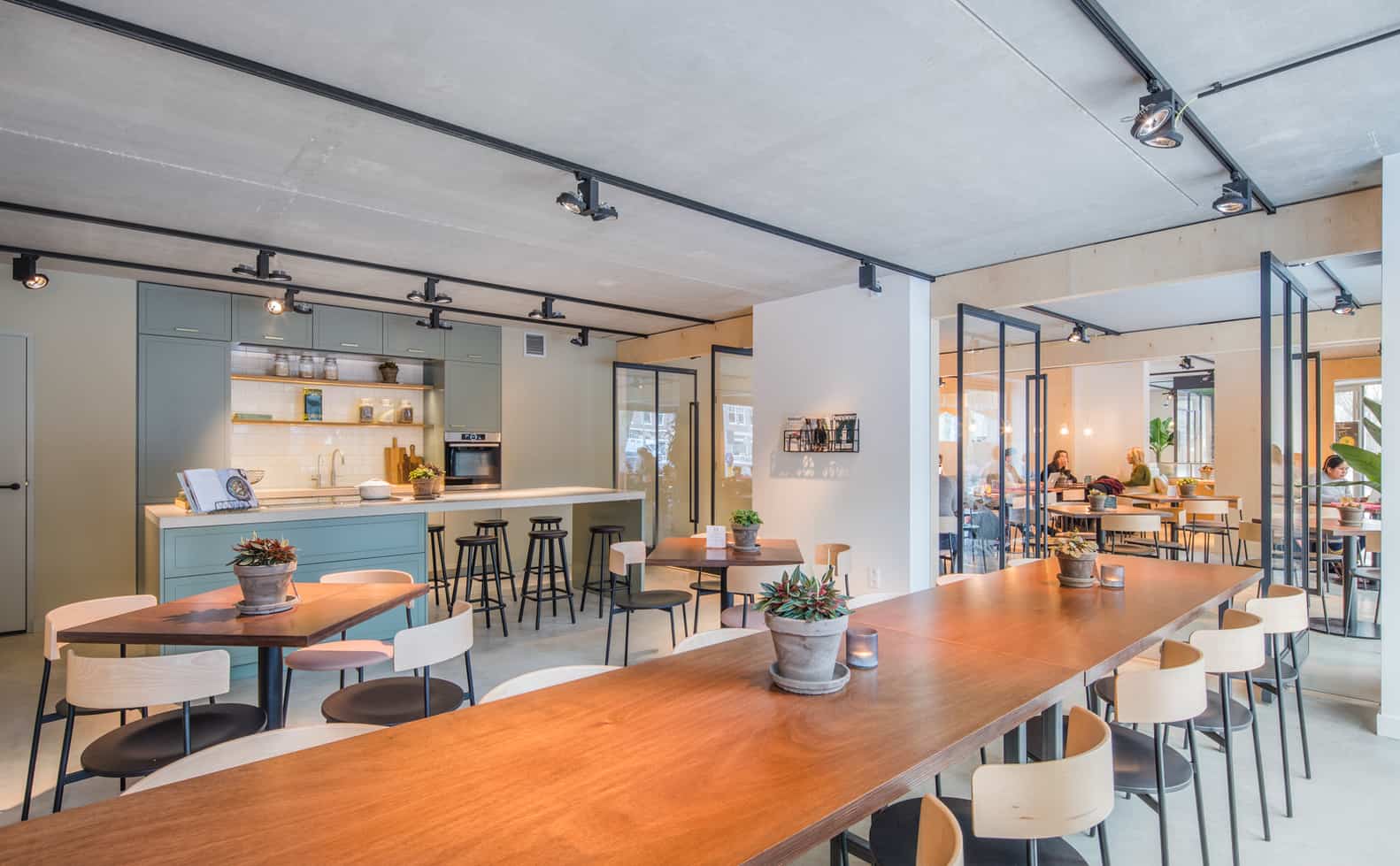 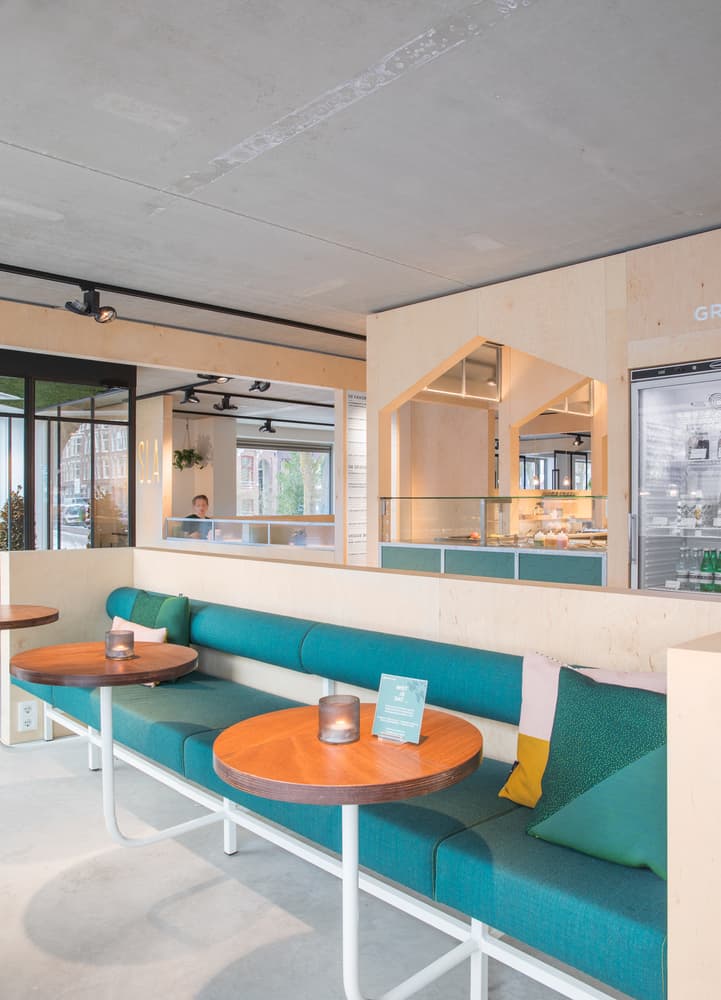 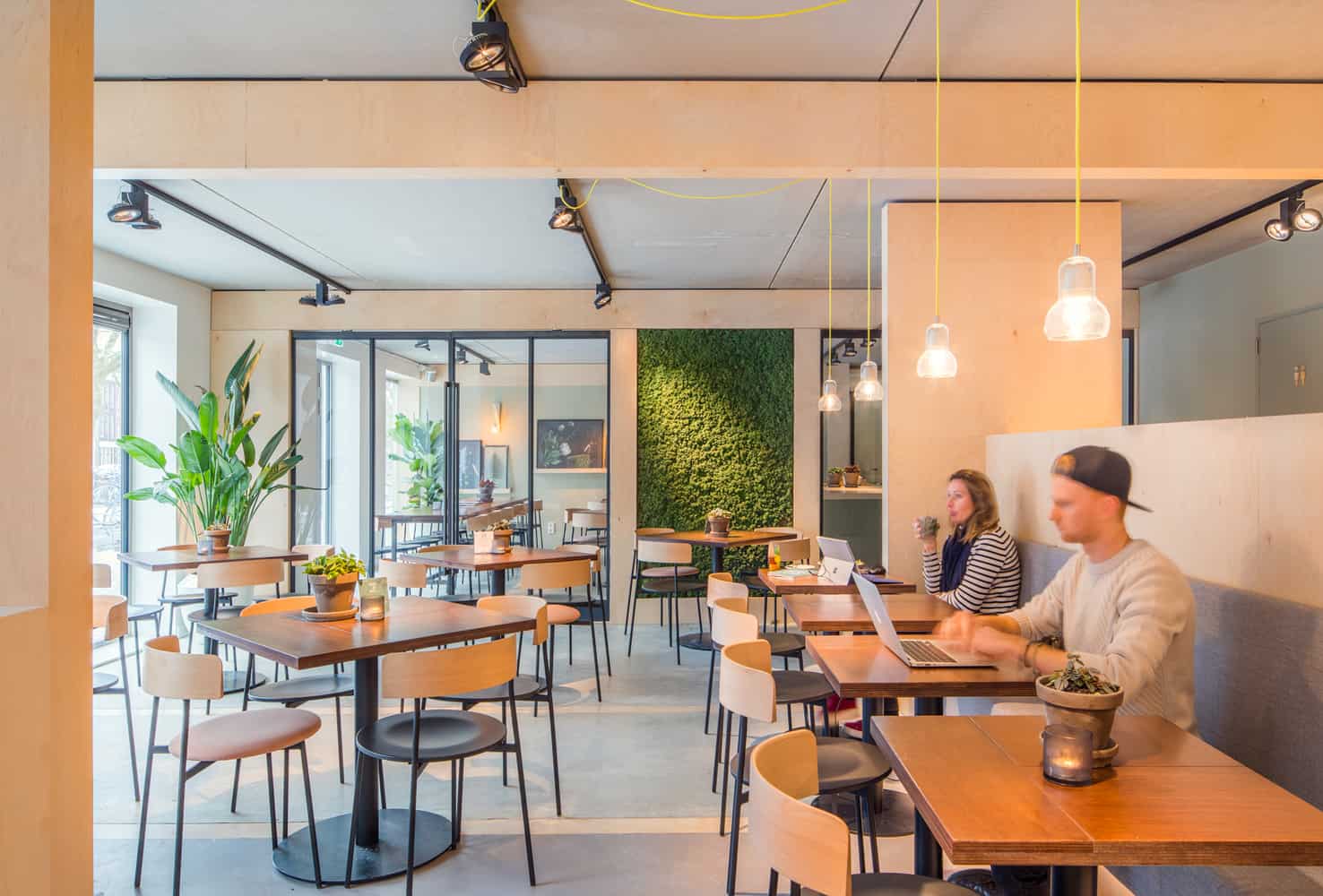 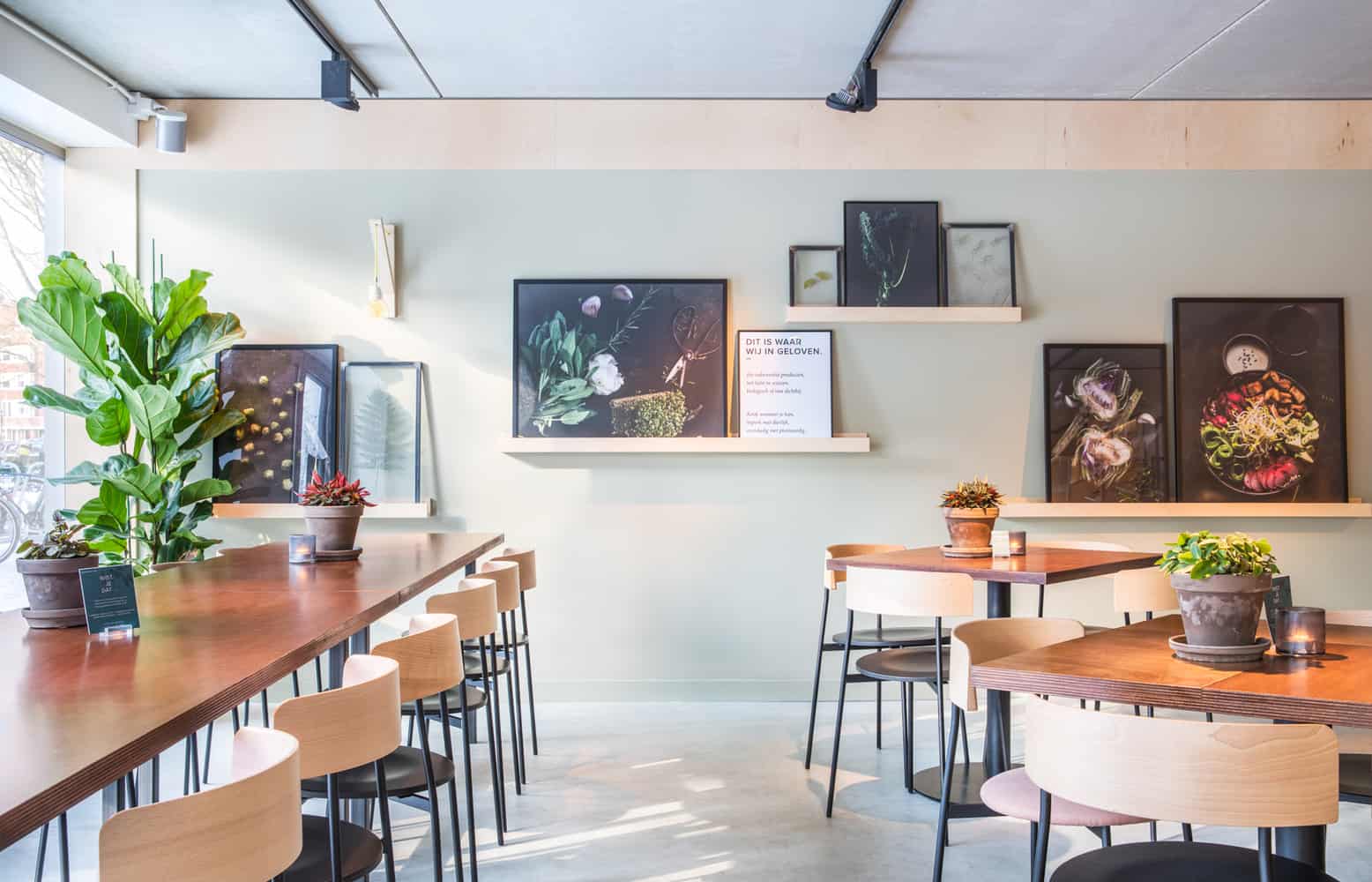 On a bustling central street in Amsterdam, in the The Netherlands, design teams at Standard Studio have recently completed a new franchise of the well known restaurant SLA Salad Bar in order to account for how successfully the company has grown in recent years.

The original salad bar was launched in 2012 and has seen nothing but positive growth since. The latest evolution is the opening of this new location, which is the eleventh of those built all across The Netherlands since the first. With this new bar, designers were specifically tasked with not only making the new restaurant itself, but also creating an entirely new design for the store’s interior.

This goal goes above and beyond just giving the building a new look. Instead, the priority was to established a recognizable atmosphere and look that customers might consider typical of the brand, associating it with the products and services it provides and the values its staff put forward with the company name. This aesthetic will continue onward as even more new locations arise.

Of course, even within the process of building a brand and typical, consistent look, it is essential to do so from elements that might be catered to specific spaces and applied flexibly to ensure that each new location functions and looks its best. After all, having each space be an organized, positive experience is still the most important thing beyond sticking to a particular look, even when the store is trying to convey a comfortingly well known identity.

As you can probably imagine, the process of putting together and making individualized salads is, in fact, the central function of the space. This is why the salad counter, which features spacious prep surfaces and storage spots for many different fresh ingredients, sits at the heart of the space like a hub.

Once they’ve moved the length of the salad counter and have their meal in hand, the space is set up intuitively in terms of space, so customers easily understand to move onward to choose where they’d like to sit and eat in several different seating arrangements laid out around the shop.

The seating spaces are flexible and have been designed to accommodate all kinds of different customers and their needs, depending on who their party consists of and what kind of day they might be having or what kind of dining experience they might be looking for. These range from individual stools at a bar for singular people grabbing a quick bite to comfortable, more intimately placed corners suitable for couples who want to take their time together.

Since the central point of the stores themselves, no matter location or style, is the food, the SLA salad bars are always built at central spots in the urban places the company choses to put them in. This makes the tendency of the space to feel diverse, accommodating, and flexible even more important, since people from all different backgrounds and experiences are more likely to be customers in busy urban centres.

Precisely because of those city locations we’ve talked so much about, however, designers made it a point to establish an aesthetic that is also sort of calming. In short, designers wanted this particular Amsterdam location to feel like a momentary escape from the hectic contexts right outside the doors, like a slower paced place where people can come together.

Overall, the space is quite open concept, making it feel contemporary in its calming, peaceful style and sensical layout. Wooden walls inspired by fins delineate space according to function, outlining where staff work versus where customers are free to spend their time. Large windows provide both natural daylight and a view of the bicycle heavy streets outside.

One of the most interesting aspects of the space that is intentionally consistent from location to location is the inclusion of greenery right inside the restaurant (beyond the presence of salad leaf options, of course). Plants play a huge role in the decor scheme; some are live and potted while others, like moss and fern leaves, are dried and framed. Green tiles and other details included around the space tie the plants in well and make the space feel and look cohesive.

One element that’s unique specifically to the new Amsterdam location of the SLA salad bar is the “show kitchen”. This refers to the way the functional kitchen and all food prep stations are built with glass walls so that there is still a delineation of space, but one that lets customers in on all of the work that goes into their meal, providing what becomes an almost entertainment moment. This space is also used for cooking workshops that customers can sign up for in the store’s off hours!