This 5,382 square foot residence is located in Villa Devoto, a district in the northern part of Buenos Aires, Argentina. 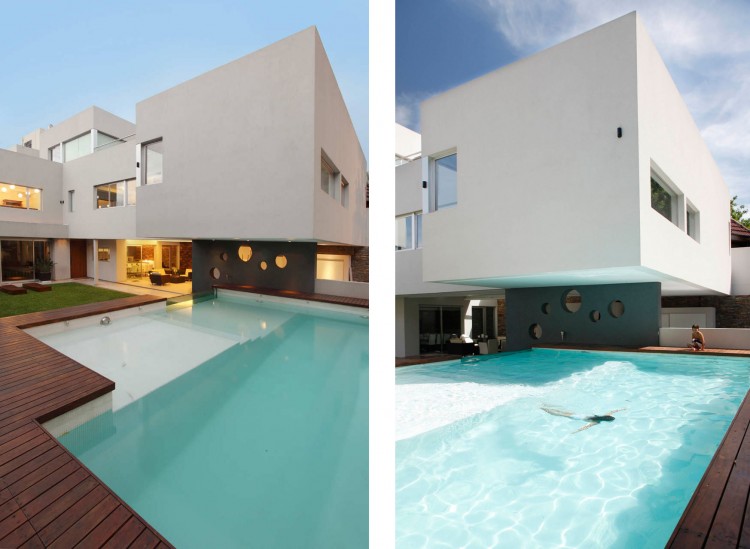 This 5,382 squre foot residence is located in Villa Devoto, a district in the northern part of Buenos Aires, Argentina.

“This project was a great challenge for the Studio, considering that it was going to take part of the urban structure. The lot of 18 x 24 meters is located in Devoto. It is between two existing buildings that threatens the project when the problem of isolation and view.

For this reason this project is leaning towards its neighbor, creating an introspective posture that creates the views from the inside rather than from the outside. An architecture that generated its own views.

In this manner the Project was able to solve the basis of isolation and views from the garden. This was a constant worry from the clients since the beginning of the Project.

The house of 500 m2 was done for a young couple with kids. It was larger than the dimensions of given lot, threatening the space of the garden. For that reason, the first floor was given less program, leaving open the exterior spaces.

The living, kitchen and dining rooms expose the garden that penetrates all the volumes in the house. The spaces distort the conventional plans of an urban house. The stone wall guides the inhabitant within the house, therefore, the rough texture of the streets are soften by the water that flows down the stone wall, a walk that is colored by the different qualities the water gives the space.

The green area between the living room and the neighbor guides the way to the entrance of the house. It is surrounded by the natural setting and different tones that the light of the sun gives to the space.

In this Project, the impact of the sun path was carefully studied, especially to place the swimming pool. One more time, water takes a big role in the creation of this house. This time the swimming pool is elevated from the ground creating a glass wall that allows views from within and the outside, creating views from different points in the house and focal point outside the house.

The house is formed vertically having a shifting effect. The bedrooms are located in the east overlooking the heart of the house, the garden. The last floor places a spa; having a jacuzzi, sauna and a gym with an exterior space. Privately settled for the couple.

This Project goes beyond the rigid setting. It translates the urban setting into a natural setting subtlety. It pushes the boundaries of the conventional urban home to a spacious living where one has the best of both, the natural and the urban setting.”

Casa BC by GLR Arquitectos