Mexican studio Agraz Arquitectos has sent us photos of the House HG project. 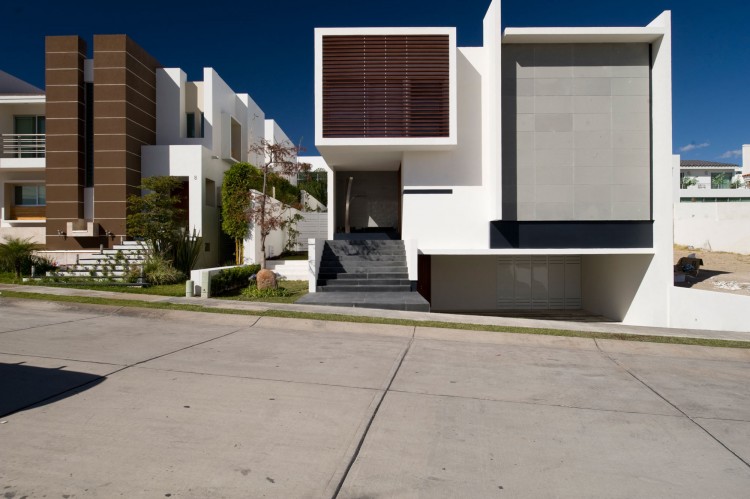 “HG house is designed for a family where masculine presence overwhelms any other. This is the idea from which the house’s program comes from and in addition to the firm’s tradition cars are placed beneath the dwellers by a half level ramp. Garage and service areas are set there, while the house goes up another half level to the main entrance where reception lobby and a small bathroom are located too.

Next comes one of the most interesting spots in the house: terrace, dinning, living and family room in a single spatial display with no divisions at all. On one side is the kitchen, separated from the previously described unit by a ramp stairway coming from the basement. Therefore, entering the house by the garage reaches the same point than entering by the main door. and ends up in the upper level within the same quality features of the mahogany and glass structure.

A generously dimensioned studio for the four boys is set in the second floor, providing them independence from all social activity that might take place in the lower level areas. And right next to it, are a couple of bedrooms for two boys each, with their very own bath and dressing rooms, leading to a terrace that was conceived as the meeting area for brothers.

Meantime, the privileged orientation of the project is destined to main bedroom, being the heading of the house. This place is divided into a shared bathroom area with separate dressing rooms for each one of the parents that ultimately come together by a light generating patio which enjoys the delight of a tree top.

Volumetrically the house has a series of structures that seem to dialogue as they create a harmonious game of shadows throughout the day.

The project is grounded in an intermediate level that upholds a central plate that carries the great cube covering this volumetry lengthways. As this structure comes out in the second level, it becomes a protected shutter belvedere, making the main bedroom an outside observatory.”

Scandinavian Design: A Home in Denmark