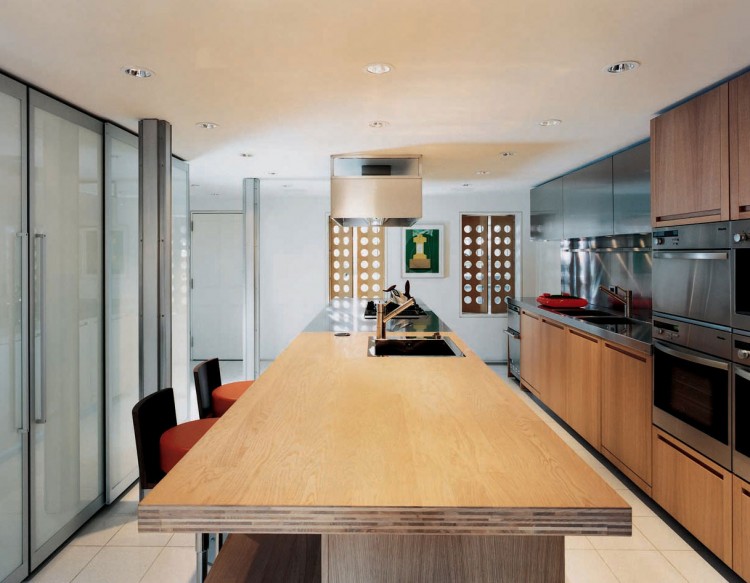 “Axis Mundi was commissioned to design and supervise the complete rehabilitation of a landmark Greek Revival townhouse from the 1840’s. Located on a charming street in New York’s Greenwich Village, the four floor building (plus sub-basement) was gutted to the original brick building envelope. All new mechanical, plumbing and electrical systems were installed, and the garden was redesigned. Axis Mundi was responsible for the complete architectural, interior design and decorating of this home.

The goal of the project was to respect the charms and scale of the original historical style without mimicking period details, and create a suitably modern context for the owner’s collection of artwork by Warhol, Haring and Basquiat. While restrained, the interior resolves certain contextual issues related to the site, yet is decidedly modernist in its attention to details. A custom bronze staircase, anodized aluminum metalwork, and overall spatial concerns relate to a contemporary sense of materiality.

Most of the details were custom designed, from the marble mosaics in the bathrooms, to the millwork and Prouve-inspired shutters on the kitchen floor. A sculptural bronze and mirrored screen was designed by Axis Mundi to create an entrance foyer, using cast glass that was salvaged from Gio Ponti’s Alitalia showroom on Fifth Avenue. A chandelier was created with glass from the same project, all superbly fabricated by Urban Archeology. Various surrealist touches, such as a painting by Matta, and furniture by Salvador Dali and Antonio Gaudi, add a touch of humor to a formally rigorous design scheme.”

A Duplex in Greenwich Village