The architects have transformed a derelict Norfolk barn into a 4,779 square foot single family home, for a total budget of £300,000. 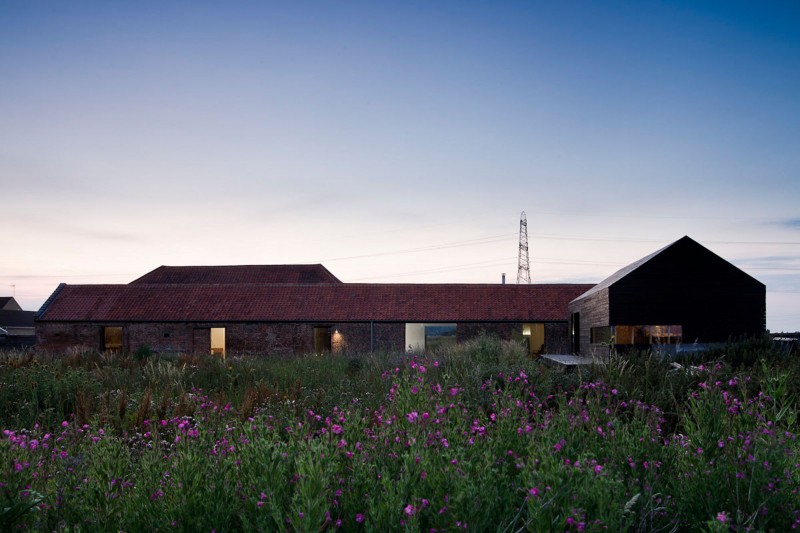 “This is a project instigated by Carl Turner Architects from the outset. We both designed and built this project. This process of as allowed us scope to experiment, learn and test ideas.

The conversion of this once derelict Norfolk barn creates a series of spaces intended as part home, part meeting place, with the capacity to accommodate working, thinking and making.

We have treated the existing building exterior as if it were listed, and inserted a new lining to the interior. Doors and windows have been set back to this line to emphasise the wall thickness and expose the beautiful bull nose brick details. The roof tiles have been re-claimed.

The interior has been left open where possible, and we have treated the interior as a landscape; cellular spaces have been treated as buildings within buildings. These over-scaled furniture pieces and ‘pods’ create spaces between at a more intimate scale.

The main threshing barn forms the main public areas of the building; the longer wing forms a sequence of bedrooms and bathrooms.

Externally, materials are re-claimed to match existing, with door frames stained Ebony. The building was stripped back to a simple brick shell. Roof coverings were removed and set aside. The timber roof structures were restored and reinforced where necessary. The roofs were insulated and the tiles reinstated.

The dirt floors were excavated, insulated and laid in polished concrete.

There were no existing services on site.

The entire interior has been bespoke made.

Due to the size and complexity of the project, in relation to the limited budget, we have had to work over an extended period of 5 years to reduce costs. Much of the project is self-built.

We had a limited budget of £300,000, and at 444sqm this equates to £676 per square metre. This low figure has been supplemented by the ‘free’ labour we have supplied. Thus we have had to be creative about finishes and have sought to create bespoke solutions from cheap industrial materials and products. We feel this approach is in keeping with the architecture.”

Beautiful House on the Mountain by Alric Galindez Architects