São Paulo-based studio Guilherme Torres has designed the interior of the FJ House project in 2010. 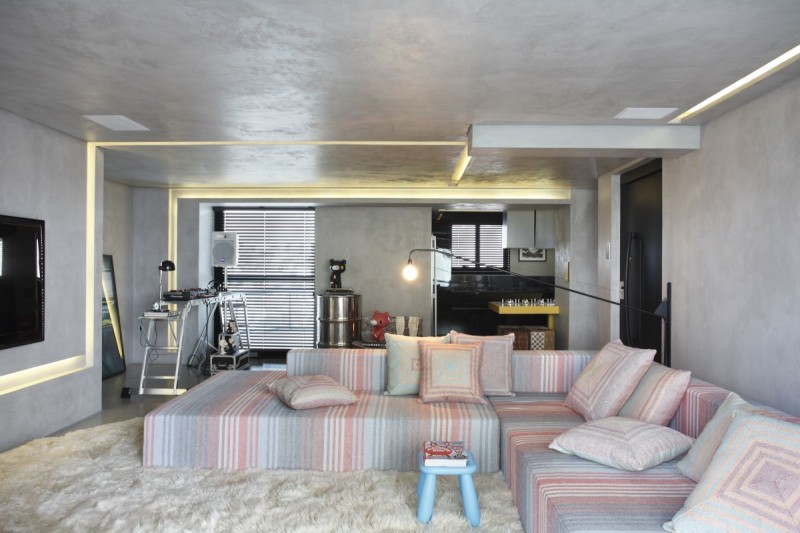 “Young, single, businessman and DJ. The owner of this apartment, located in the West side of São Paulo, wanted to keep living near his company and at the same time grant his new house all the modernity that represents this moment of his life.

The property, a typical apartment of the 80’s, was literally put down and rebuilt from scratch. All partitions, that limited the rooms, were removed. The toilets and two bedrooms were kept for structural reasons. Some windows were also eliminated, to create the concept of a box in which the illumination plus wall and floor coverings would create a three-dimensional effect, like in a night club.

All the illumination was designed using Leds, featuring no other light source in the whole apartment. Besides the scenographic effect, the illumination presents a great energy saving combined with a high luminous efficiency. The walls and ceiling were built with plasterboard and then covered with polymer cement.

The kitchen, integrated to the living room, occupies the area that was previously designed for corridors and lavatory. All the woodwork was designed by the architect and one of the great aspects of the project’s interior design was the “high-low” effect, that is, great insights with very low costs. For example, the DJ table, is actually an aluminum ladder that gained a new interpretation. The whole furniture line follows an unassuming style, inspired in the 70’s.

The Master suite gained a bathtub integrated to the sleeping area, a transgression more than welcome on this contemporary way of living.”