This contemporary residence by MORIQ is located in Hamala, Bahrain.

It includes several luxurious details such as a home theater, gym, and indoor/outdoor swimming pool. 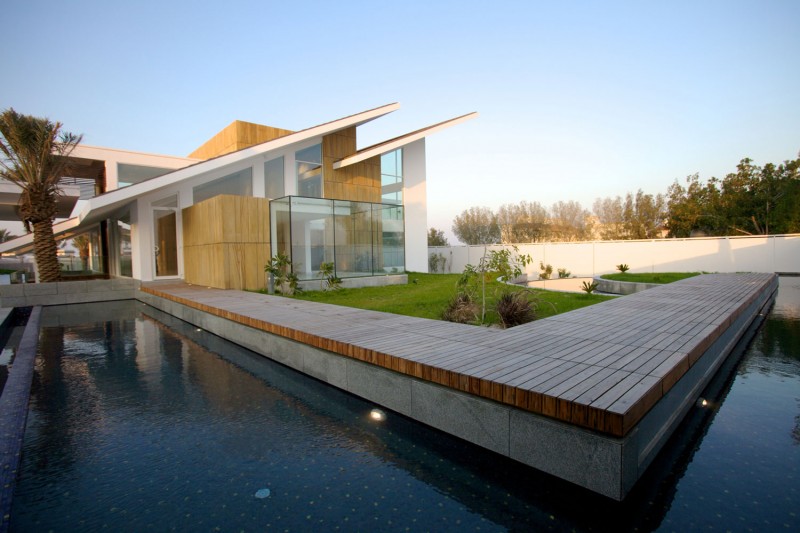 In an altitude of deliberate self appraisal, the house situated in the north western part of Bahrain in an area called Hamala shoots up from its entry point at western side and forms almost an iconic structure of twin slopes, recognizable from far away.

The western side protects it from the extreme sun in summer. An extension on the north eastern side houses a few bedrooms+deck.

The landscape is well integrated with the various changing levels of the inside, designed on split levels where nothing is very far away, and every level opening into its landscaped area and part of the house is dug in to escape the summer heat and part of the house sits a top the ground with lots of glass to enjoy the winter.

The service areas are arranged in the centre of the house and all the living areas and bedrooms are in the peripheral areas to make maximum usage of light, ventilation views,etc.

In keeping view of the increasing size of the owners family-midway through construction-another equal sized lot(approx 2000sqyrds) was added to this existing north facing plot-which together became a generously sized area of 4000 sqyrds with roads on both north and south sides.

The layout was so designed that all the services like sanitary ducts, ac shafts, electrical automation rooms staircases, stores, toilets, dresses, etc. are in the central part of the house and the main areas like lounges, living, bars, bedrooms were put on the periphery thereby giving them all the precious light, ventilation, views.

The house was designed with split levels with every level opening into its landscaping. All main bedrooms are on upper level and the living areas on the ground levels. Two extra bedrooms along with a gym and a temp controlled swimming pool are tucked in the mid-cellar. The home theater was planned in the cellar. All the spaces are so well connected that a strong sense of ‘unit design’ prevails.

Two sloping roofs cover these internal spaces cladded with wood inside and shingles outside.

The juxtaposition of the various split levels and the sloping roofs covering them give every space a unique ht and proportion while at the same time also giving a strong sense of a unit.

The floors are laid with white composite stone. The central staircase atrium has stone cladded Wallace essential point was no embellishments.

Where forced, no extra materials were used and specifications were repeated to make the interior architecture stand out. The resulting spaces were so interesting within themselves that no extra decoration was needed. The same interiors materials were extended to outside landscaping as well to integrate not just the interior with architecture but also with the exteriors for that unit design concept.

A house for all seasons. Given the extremities in weather, one can either enjoy the winter sun from all rooms which have floor to ceiling glasses or if one wants to escape the summer heat. Then one can retreat into the cooler mid-cellar and cellar areas. It’s like having a bit of both the worlds.

The new block had 3 additional rooms planned along with a open to sky swimming pool and a barbecue deck.

One more gate was planned from the south road.some additional servant quarters were added near this.ample parking space was planned for at least 4-6 cars.

A long narrow water-body traverses along the south-north span of the building and turns into a snail-like water fall near the northern yard. Lots of different levels were created in the landscape to integrate with the changing.”