Located in São Paulo, Brazil, Casa Cubo was completed by Studio MK27 in 2012.

The home, as its name suggests, consists of a large minimalistic cube, very different from its interior, which bursts with personality from the wide range of materials and decorative accessories used to create its atmosphere. 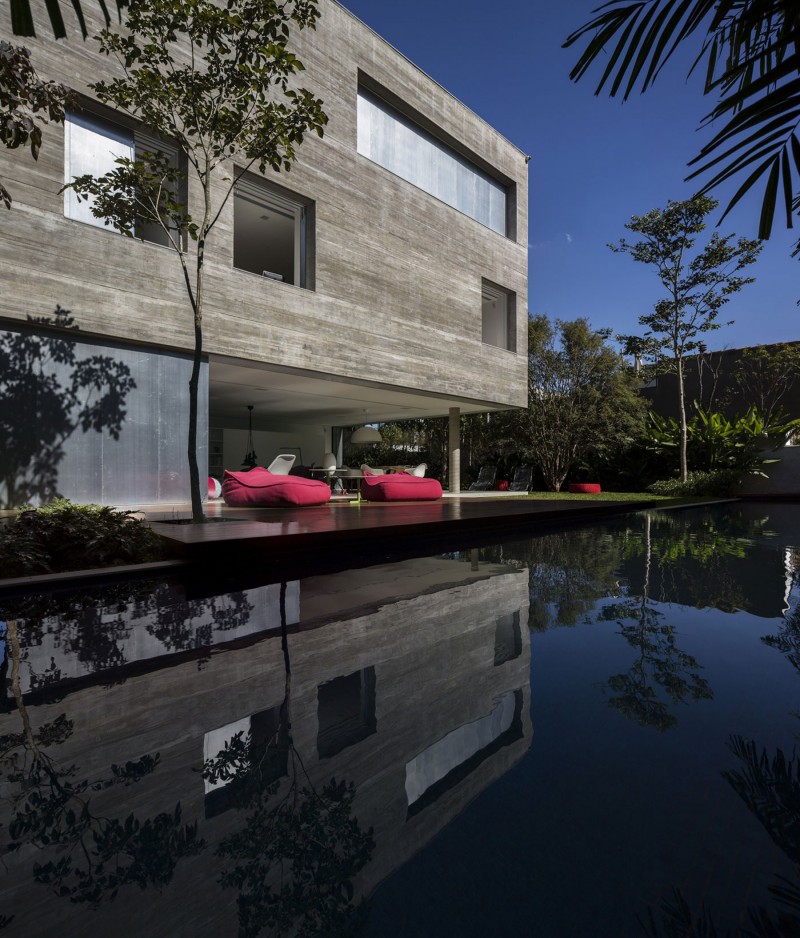 “An urban house resting like a monolith over the garden; a single cubic volume housing every function and opening and closing to the outside. Each design has small, very simple rules that give the structure its form. The rule here was to inhabit this pure volume, building openings wherever necessary and considering climate conditions.

The common area is therefore an open space, like a rip in a concrete box, totally integrated with the garden. The cube-box is rebuilt on this floor using metallic panels – made of perforated sheets – that can be opened all the way. When closed, this system gives the room privacy and shade. When open, indoor space becomes an extension of outdoor space.

The other top two floors are held in a concrete box, where the project’s rules, the perforations in the cube, are continued: there are open windows in the bedrooms, television room and office, providing ventilation. Nevertheless, the cube’s materiality remains clearly identifiable.

On openings in the bedrooms, the same metallic paneling works to filter the light. A second layer for closing is made of sliding glass panels. This entire system of metal and glass panels is completely embedded in the walls, giving the homeowners total control of lighting and ventilation. The last floor houses not only part of the home’s infrastructure, but also a small outdoor living area on a garden terrace, with a view to the surrounding area.

Like its simple volumes, Casa Cubo uses few architectural materials. The façades are comprised of rough concrete – shaped using a handcrafted wooden mold – and the metallic panels – whose color is reminiscent of the concrete itself. The inside is structured by a specially designed ceramic tile floor that forms a continuous fabric in the common area.

Casa Cubo at night becomes a lantern. The internal space is seen on the façade: the dense volume of concrete is muted, giving way to volumes of internal light, as if they were extruded from the cube itself. A monolithic volume that, in its empty interior, contains other volumes.”