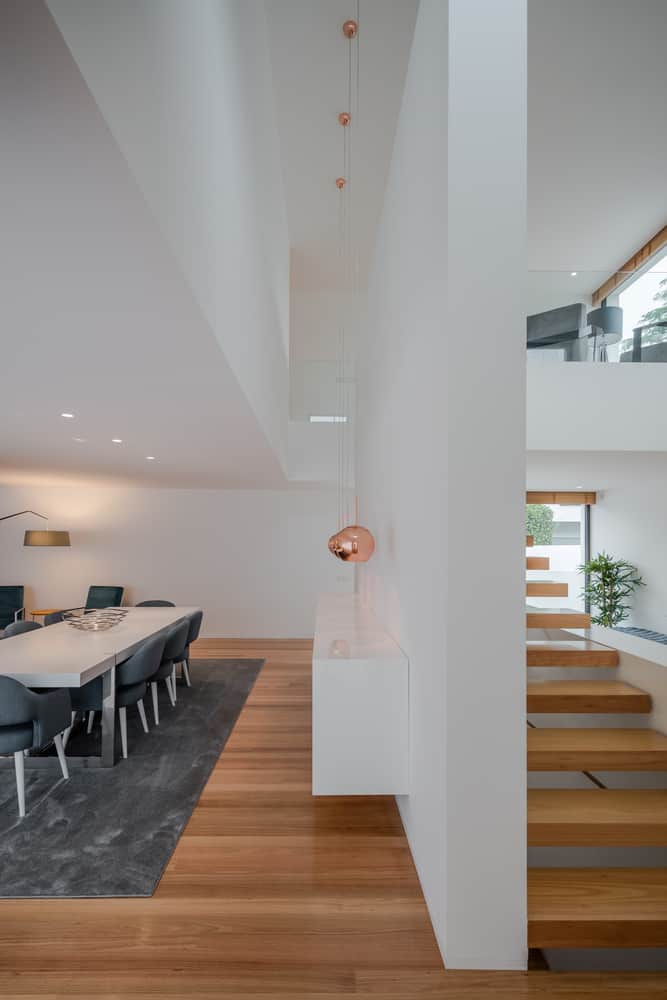 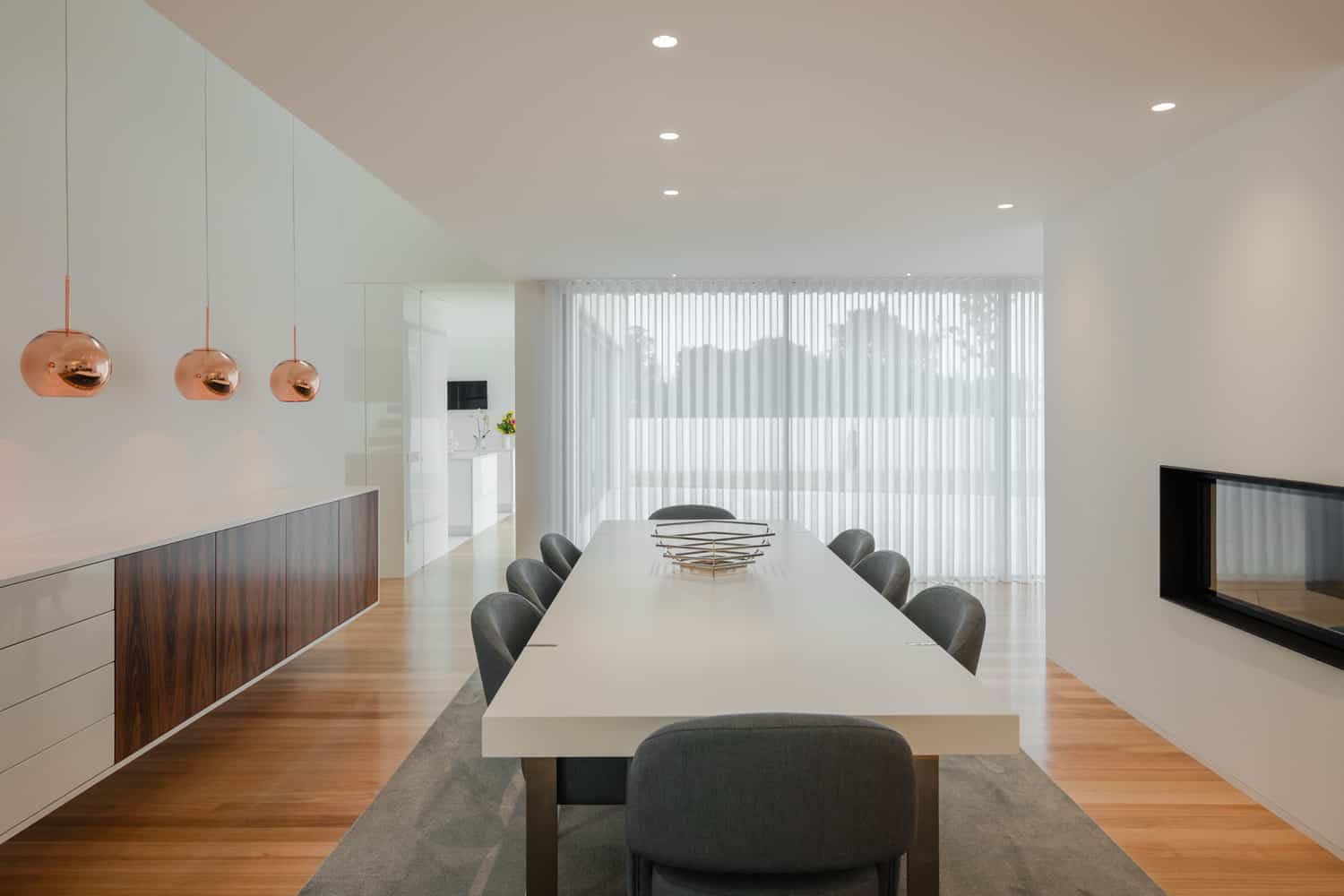 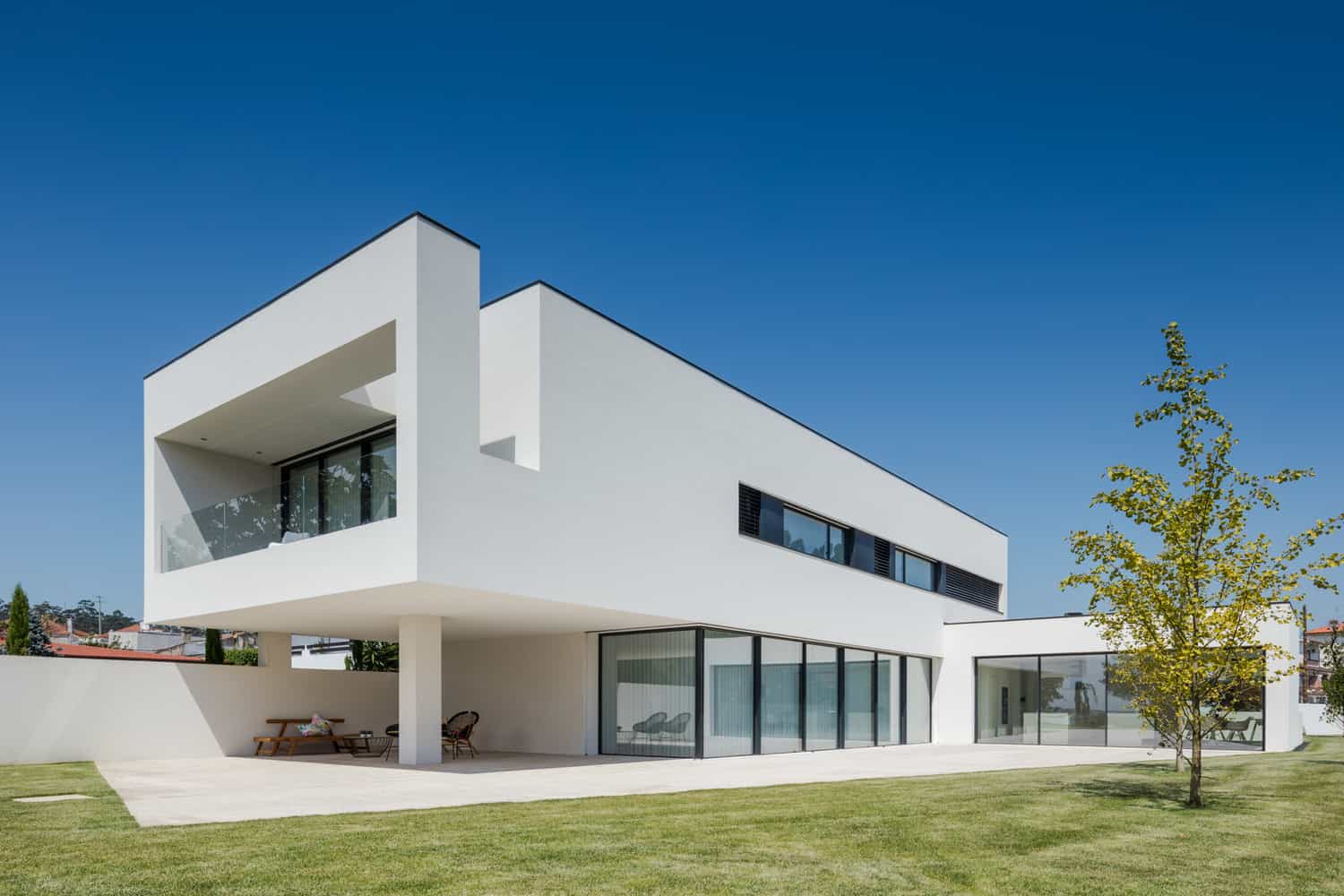 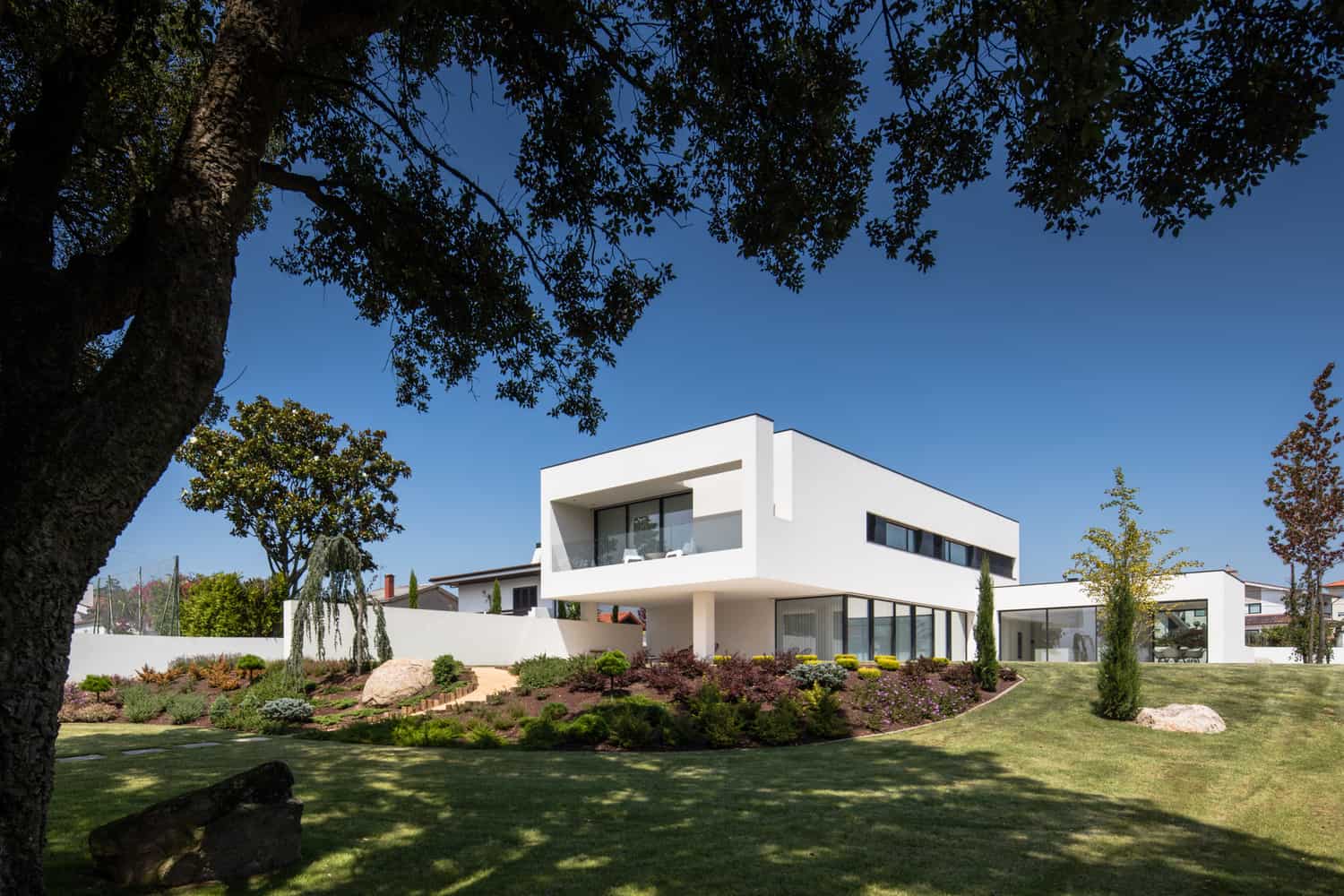 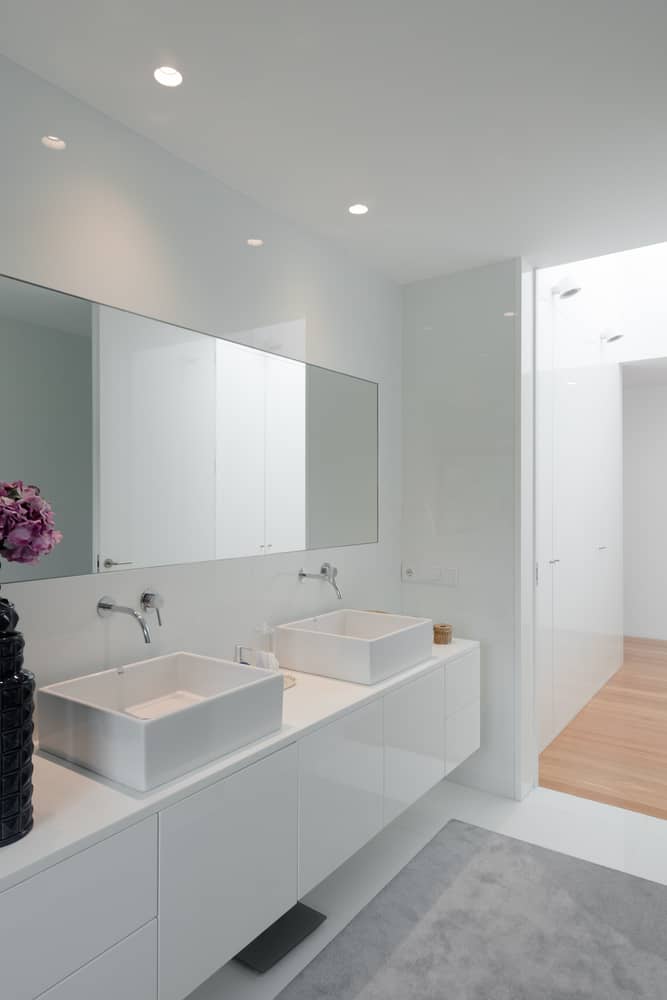 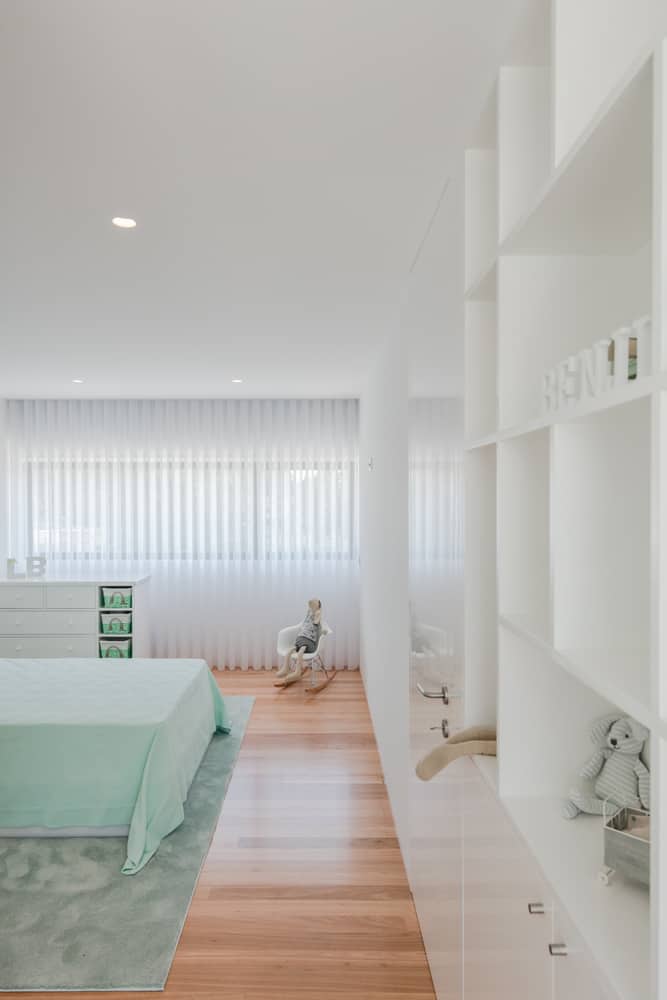 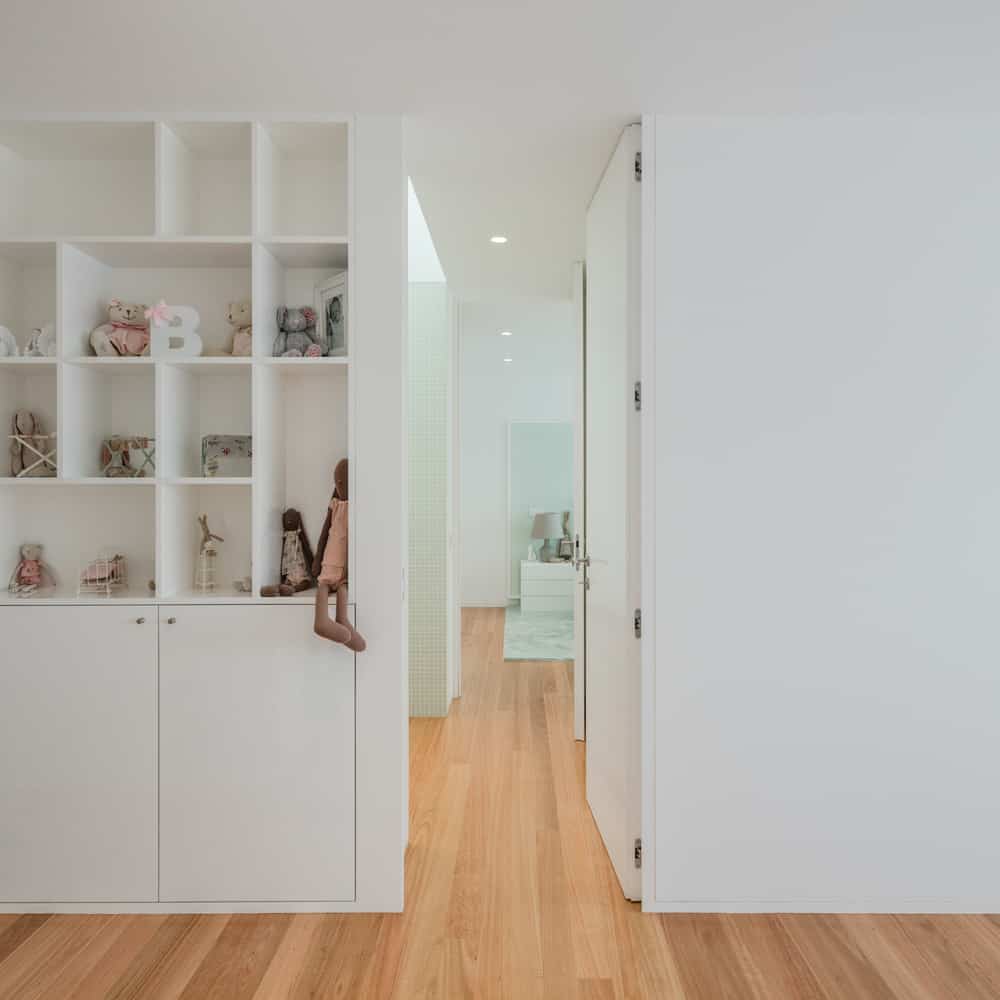 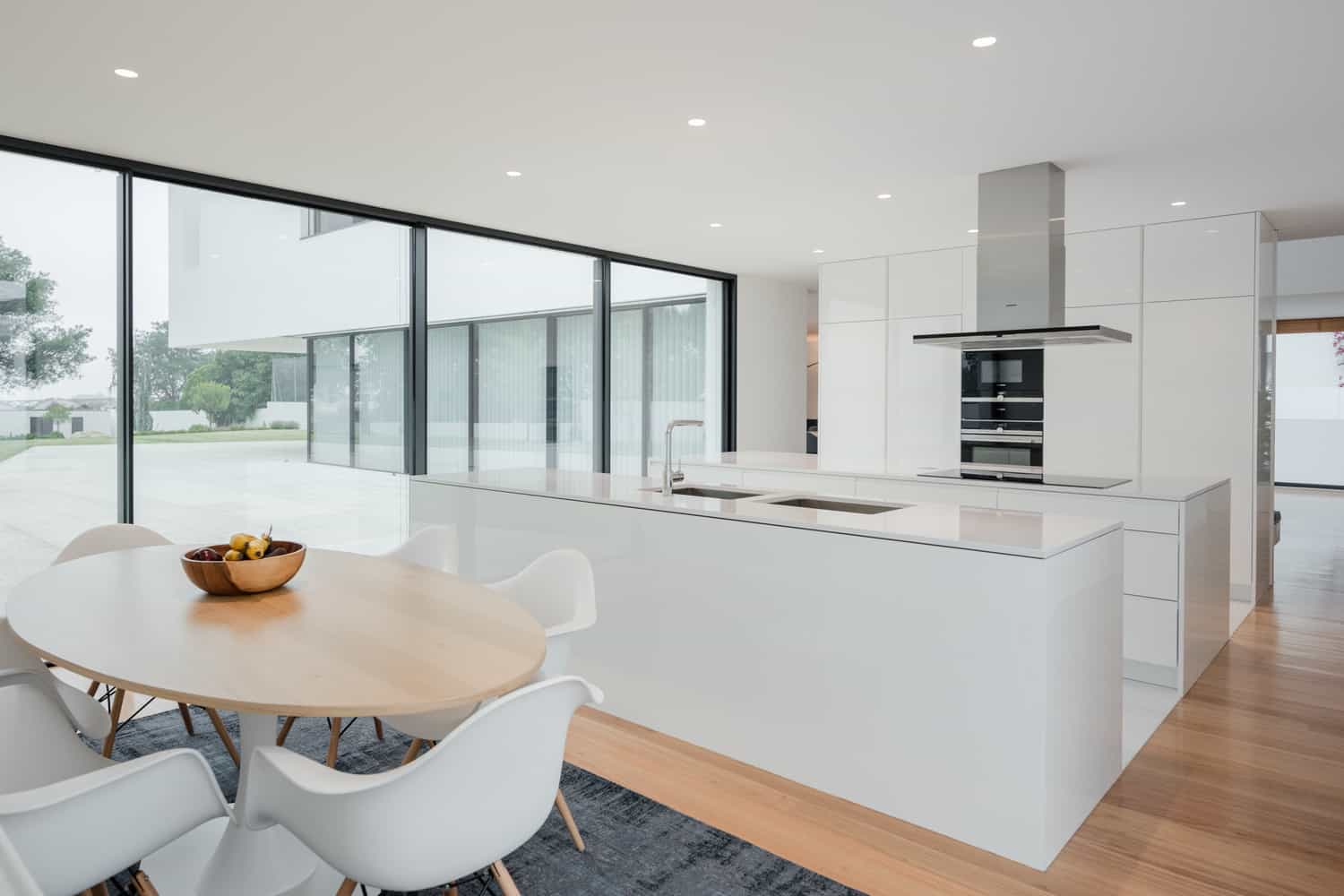 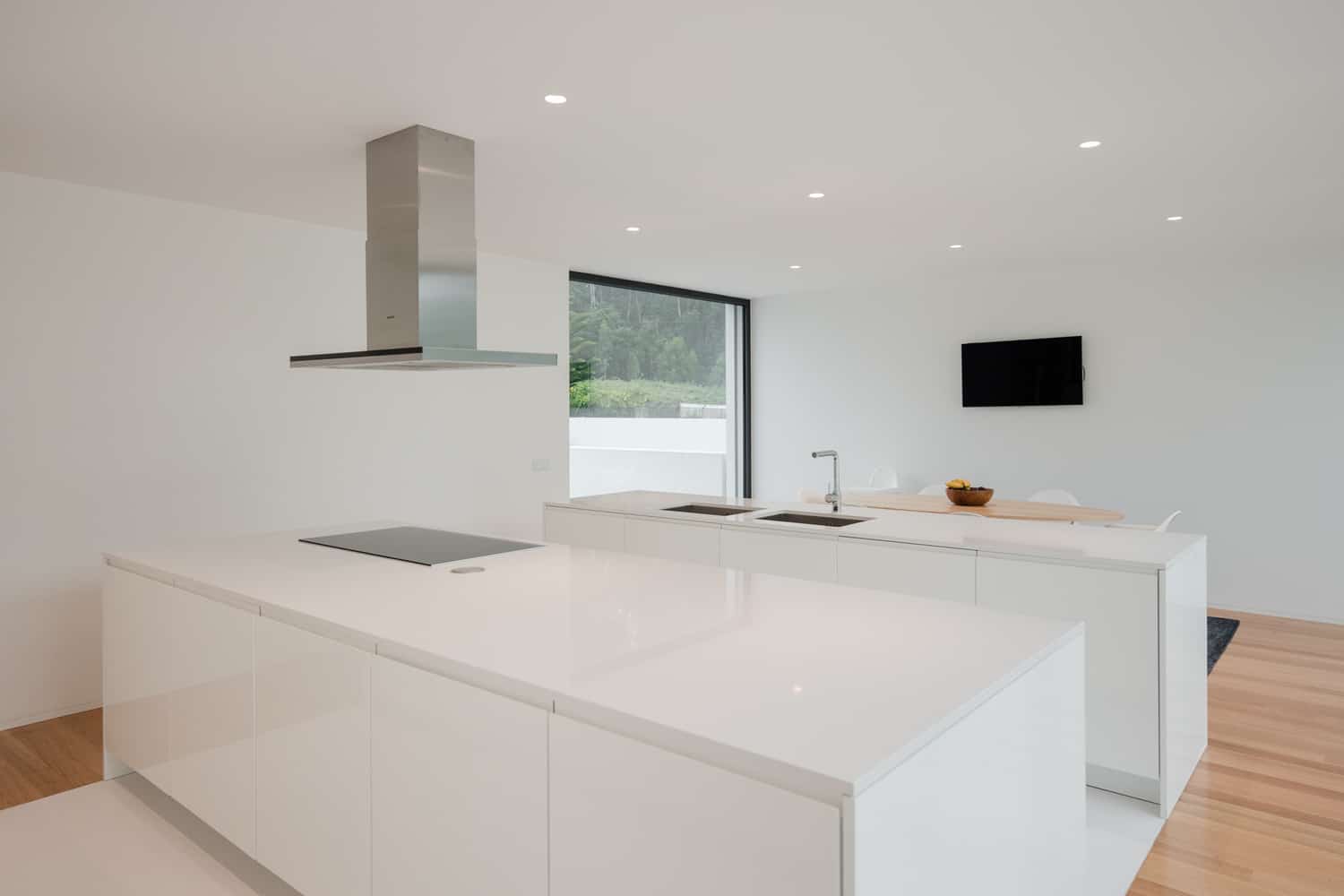 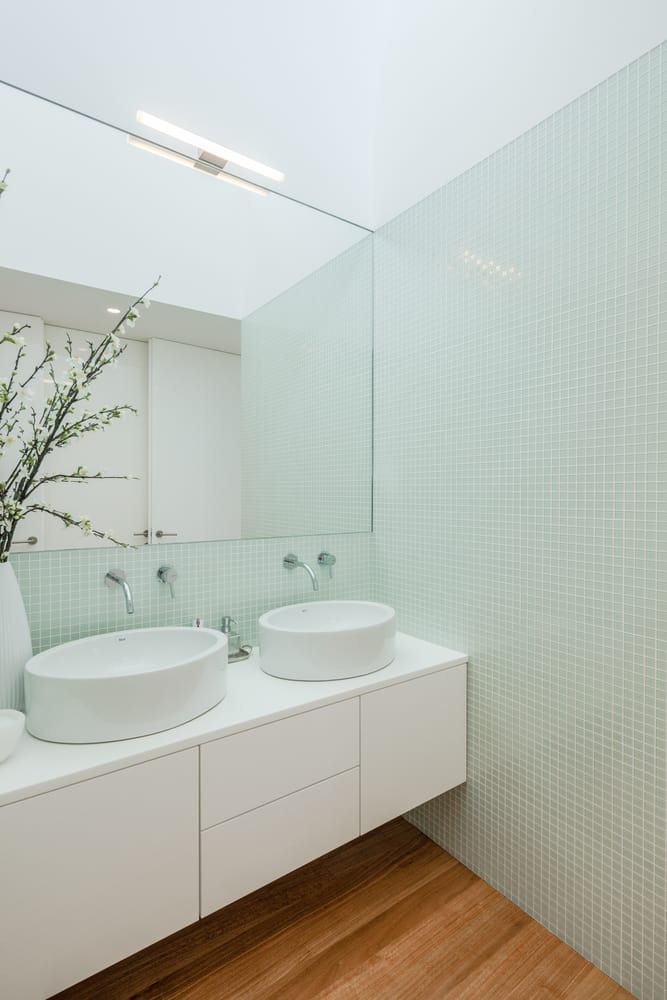 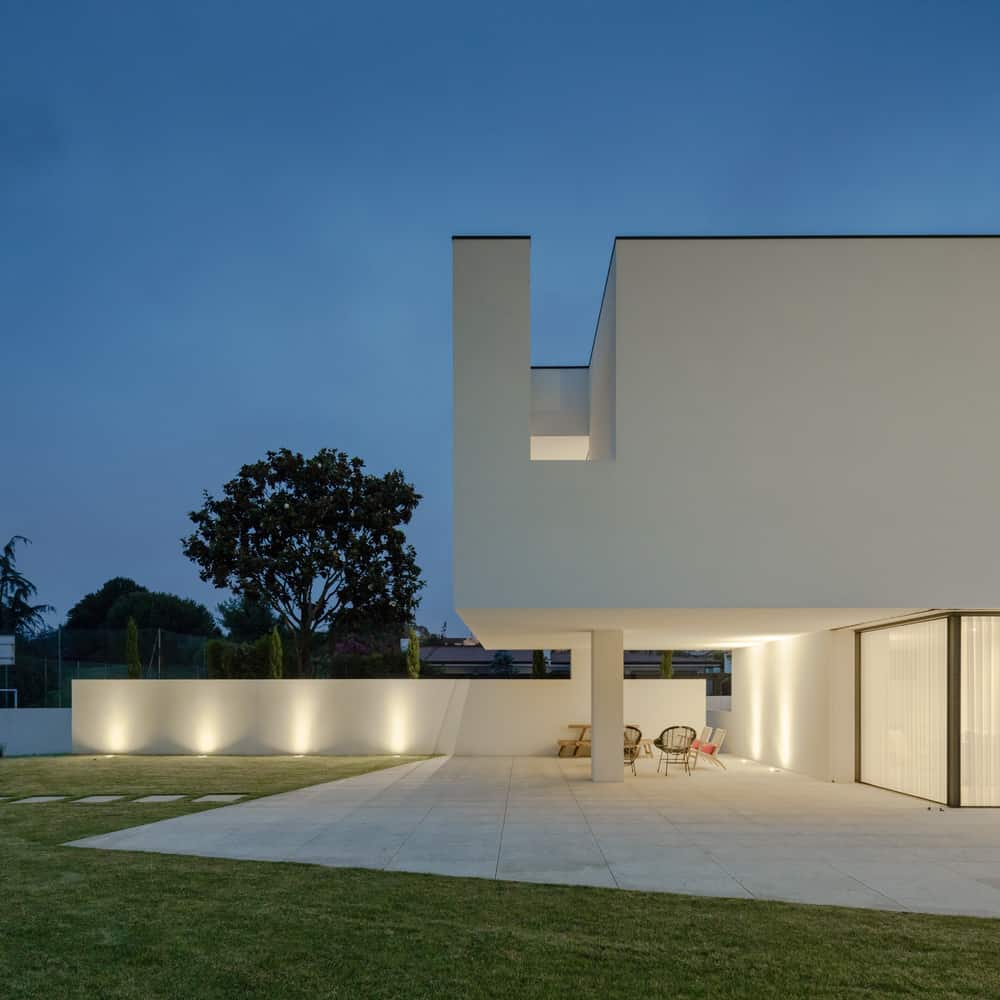 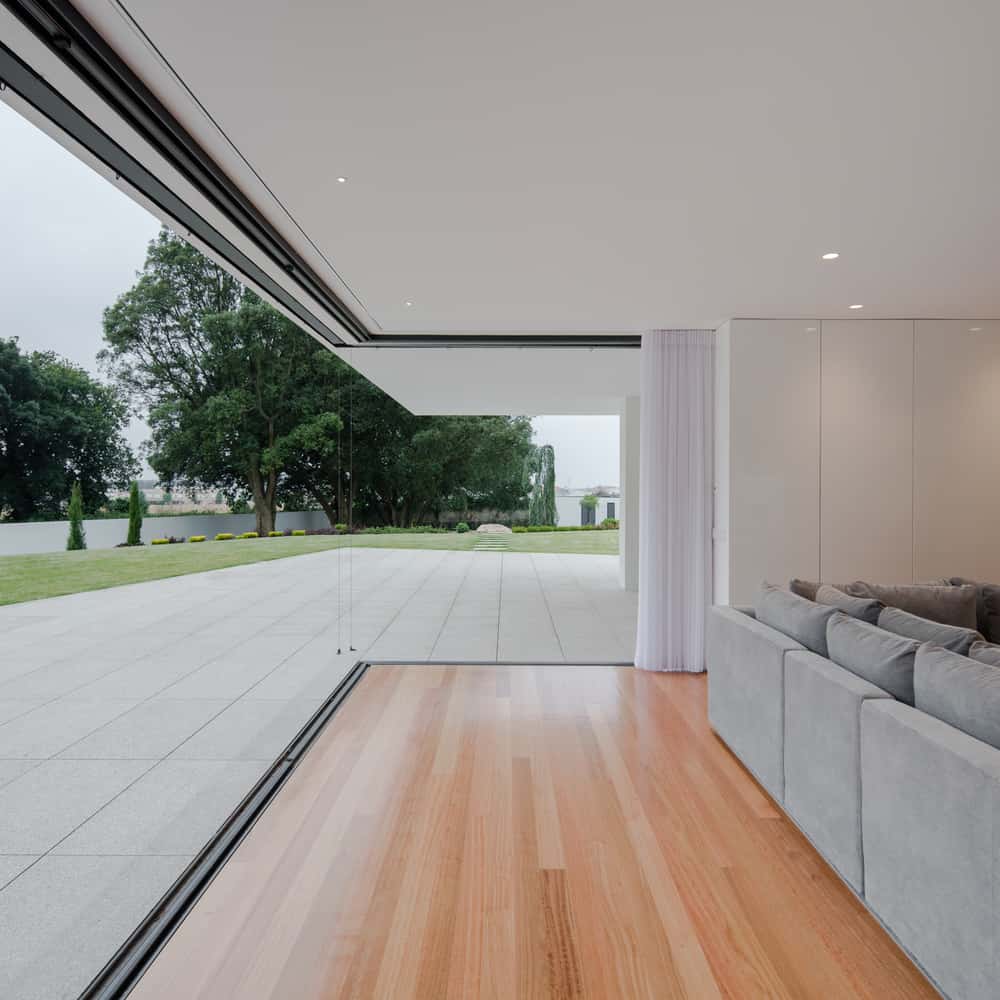 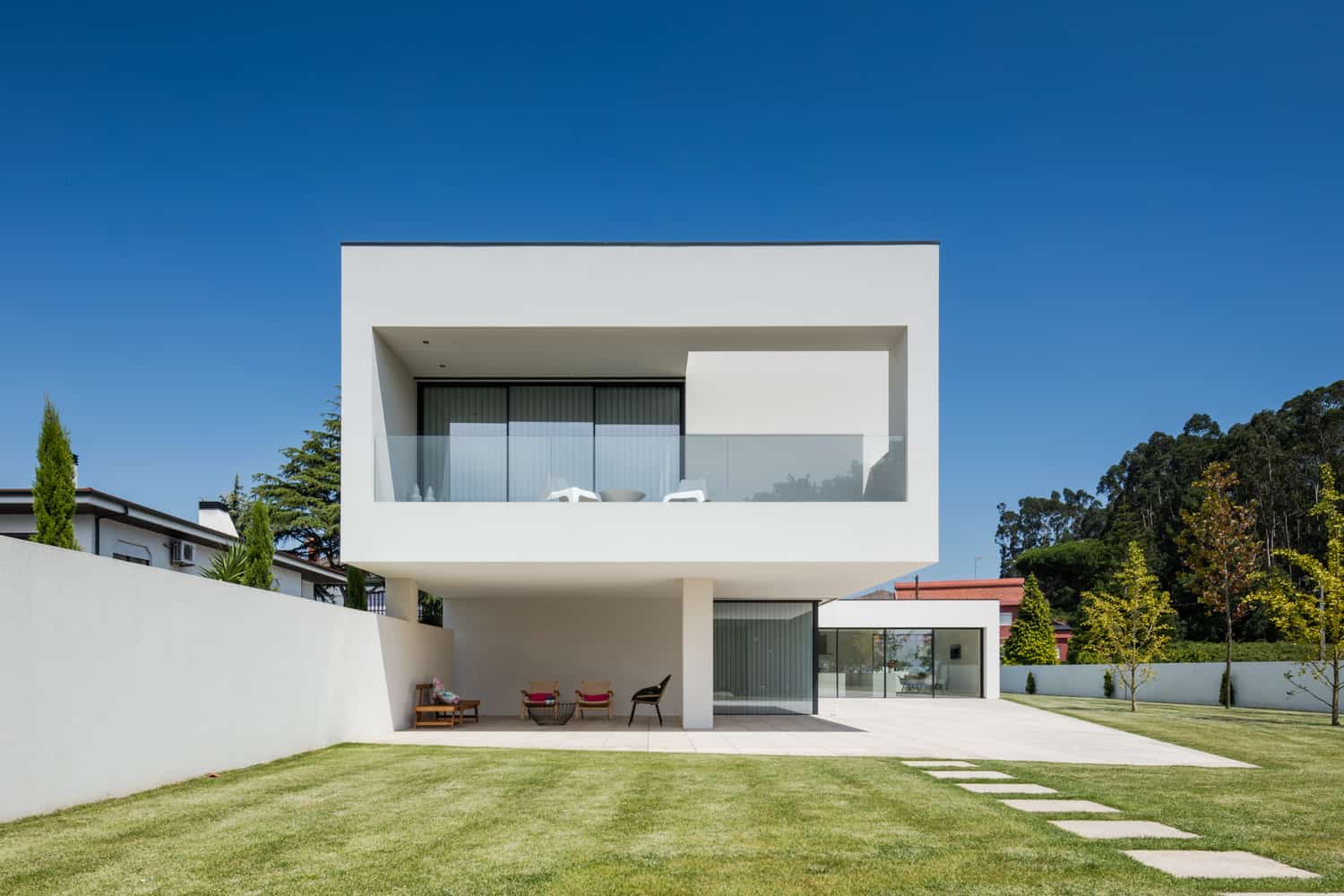 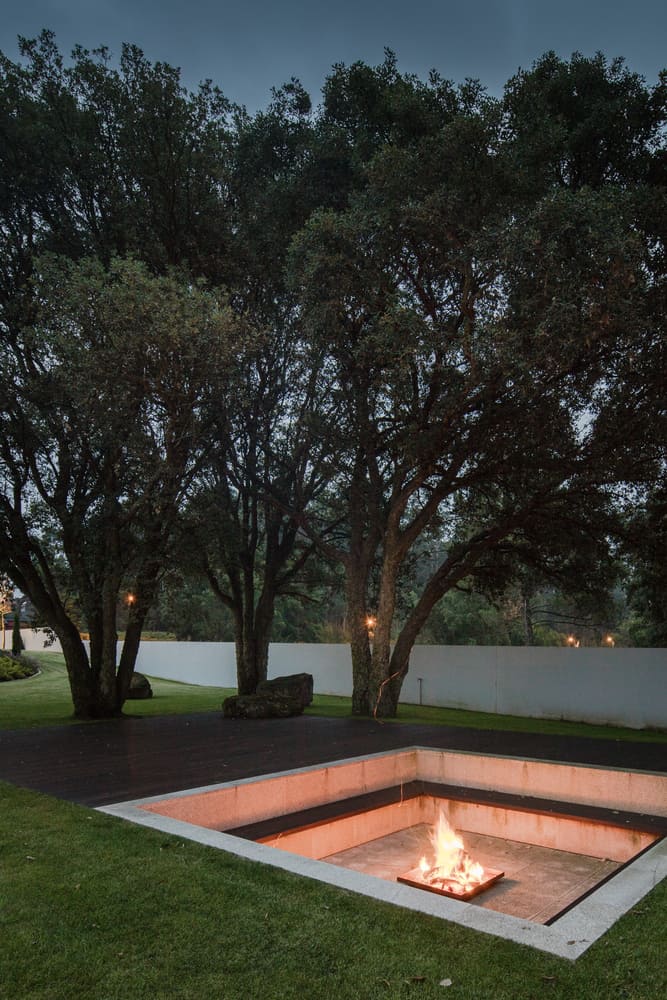 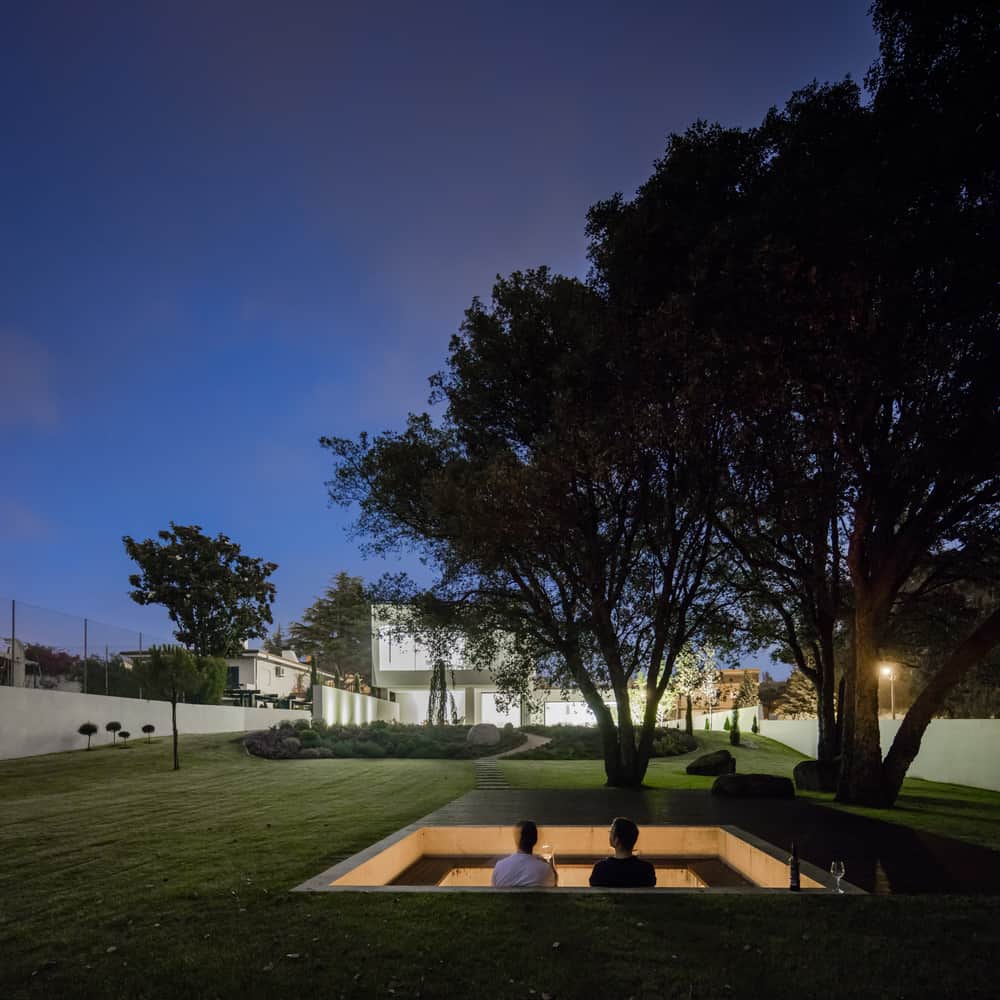 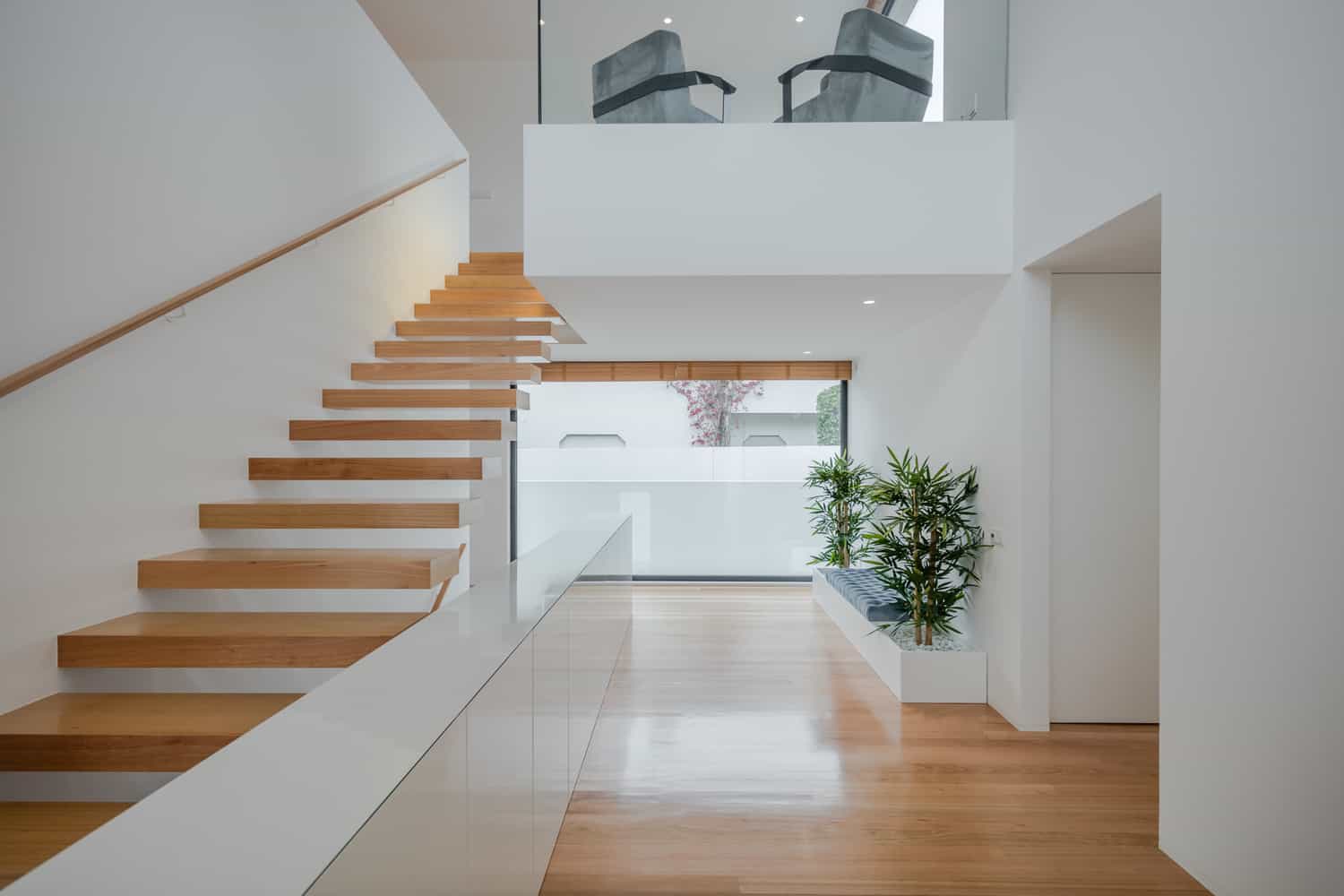 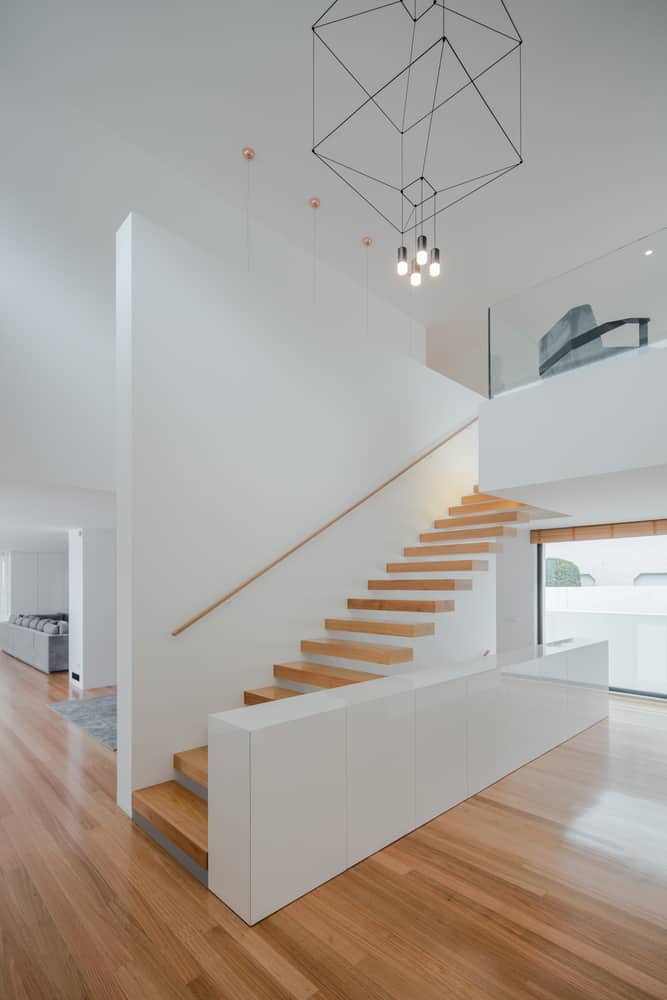 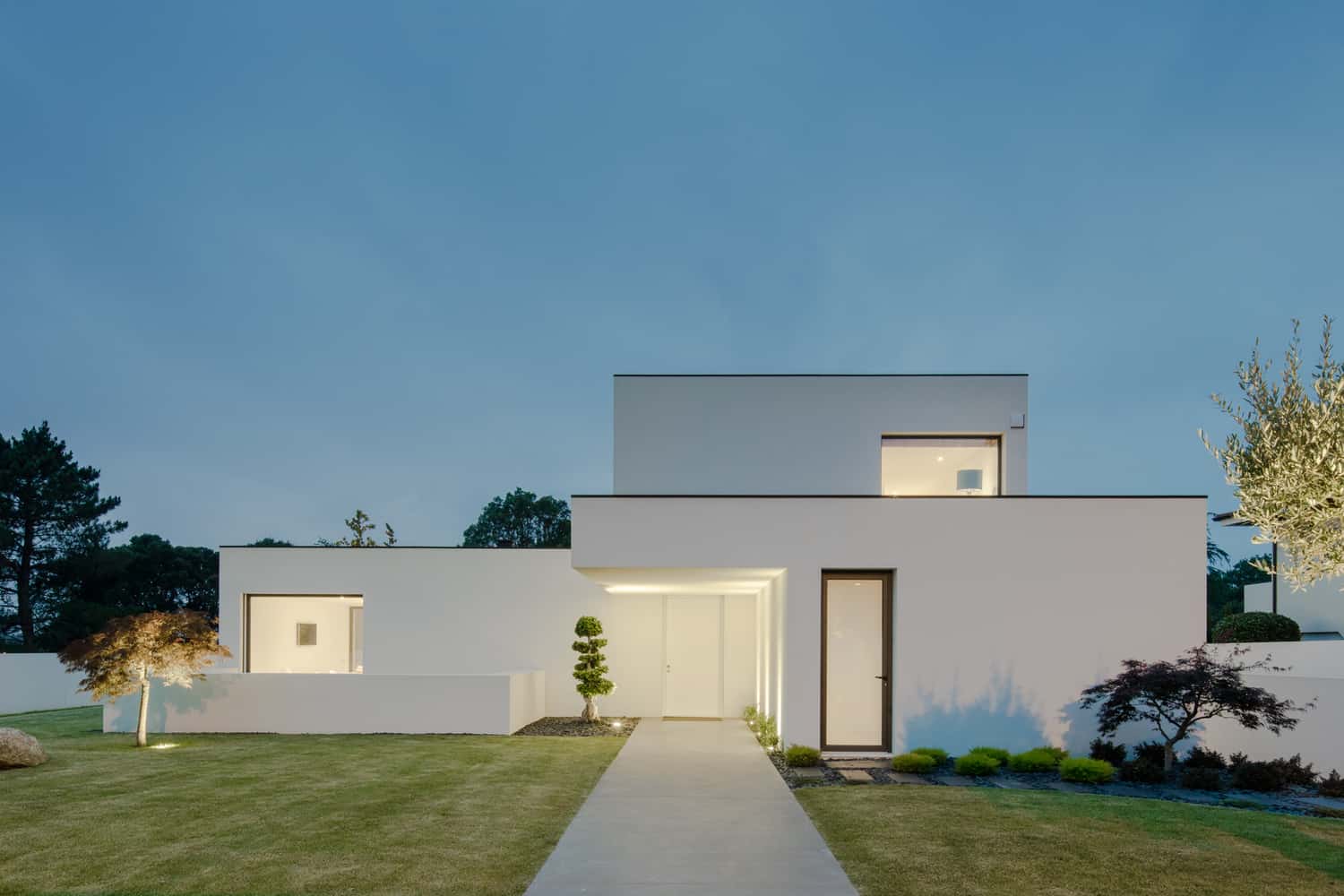 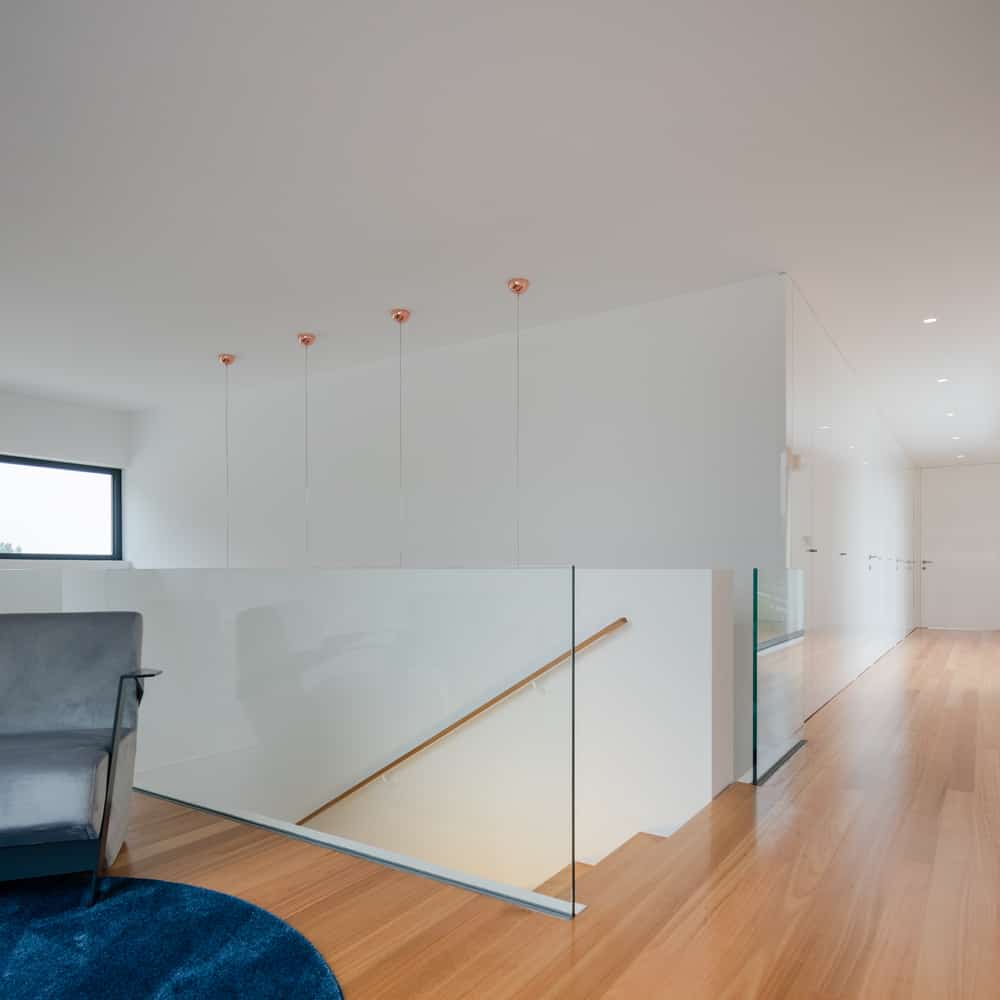 House BL, a stunning new dwelling created by Hugo Monte in Póvoa de Varzim, Portugal, is a modern haven in the midst of a greatly contrasting rural setting.

Despite its slightly “out there” location, the sprawling, cubic house looks more like something very contemporary that you’d see in a city, making it stand out beautifully from its surroundings. Even so, its sleek lines and subtle white colour prevents it from sticking out too far, rendering it rather beautiful rather than being an eyesore.

Part of the reason the house blends so well despite its modern structure is the designers’ emphasis on enjoyable outdoor spaces. These balance the building itself very well. For example, visitors are easily hosted on a largely extended back patio that features a relaxing seating area and a sunken fire put that’s safe for the area and bears a calm, contemplative atmosphere.

Entering the house, you’ll encounter a bright, naturally lit entrance hall that’s spacious and welcoming. This extends upwards, the height of all three floors included in the house. On each level of the rectangular house, you’ll find rooms organized by function and the demands of daily life, which was intentional to create food, sensical flow throughout the house during the coarse of the day and week.

At the basement level, that sense of good flow and easy access continues downward where the space incorporate the garage almost without interruption. Here, a ramp seamlessly transitions one space into another, alongside storage rooms and a workout space. This area is accessed by the same central staircase you might have seen in the foyer, which extends throughout the whole house and gives access to every single floor.

On the main floor, designers included an office, a guest bathroom, a living room with plenty of seating, and a sizeable kitchen. Each of these are naturally well lit thanks to high standing glass panels that let the light from the outside windows to seep in, keeping the place feeling open, but at the same time provide some delineation between rooms with differing functions.

Upstairs, bedrooms are balanced with a stunning reading lounge. Here, each room is connected in some way, either through the lounge, the double-height hallway space, or the master bathroom, giving the whole floor that same sense of seamless flow. Ample closet space is also provided, which is simply a bonus! To blend indoor and outdoor spaces even further, the master bedroom features a stunningly wide and spacious balcony that overlooks the garden and the yard below, providing a fantastic view.

Flanking said garden, a series of century old cork oak trees stand where they’ve always been rooted, undisturbed and given a place of honour in the garden. This is because designers chose to build the house and patio layout so that it worked alongside the trees, rather than changing them in any way. Now, they form a sort of perimeter around the fire pit, enhancing the spot’s feeling of calm.

The Breezehouse by Blu Homes