This 1,250 square foot one bedroom, one and a half bath apartment is located in The Watergate complex, a group of five buildings built between 1963 and 1972 in Washington DC, USA. 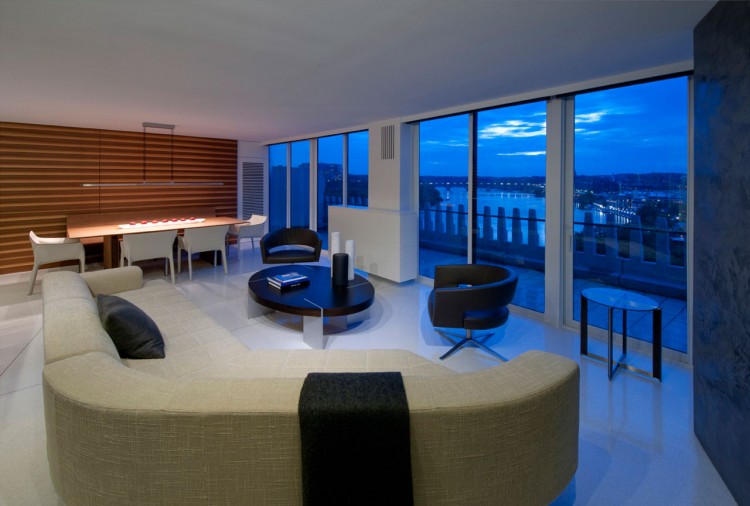 “The Watergate complex, in Washington, DC consists of five buildings sited on ten acres overlooking the Potomac River and was built between 1963 and 1972. Designed by Italian Architect Luigi Moretti, the Watergate is considered one of Washington’s most desirable addresses.

This 1,250 square foot unit is located on the fourteenth floor and was never previously renovated. Compartmentalized spaces with ceiling heights less than 8’-4” high presented the perception of a low horizontal environment. Offsetting these less than optimal existing conditions are spectacular views along the Potomac River looking toward the landmark Francis Scott Key Bridge.

The interior was gutted to essential structure and plumbing, electrical and mechanical infrastructure. Flooring was removed to the concrete slab. In reference to the client’s program and in deference to the view, the space was reconfigured with a formal clarity to provide open living spaces with river view orientation. An integral plastered wall initiated near the entry organizes the apartment and angles to direct views along the river and toward the Key Bridge. Planar walls and cabinetry elements combine with clear and translucent glass to further organize and define spaces.

In this project the architecture is intended to provide a framework for the furnishings and the view while minimizing the sense of the pre-existing low, horizontal environment.”