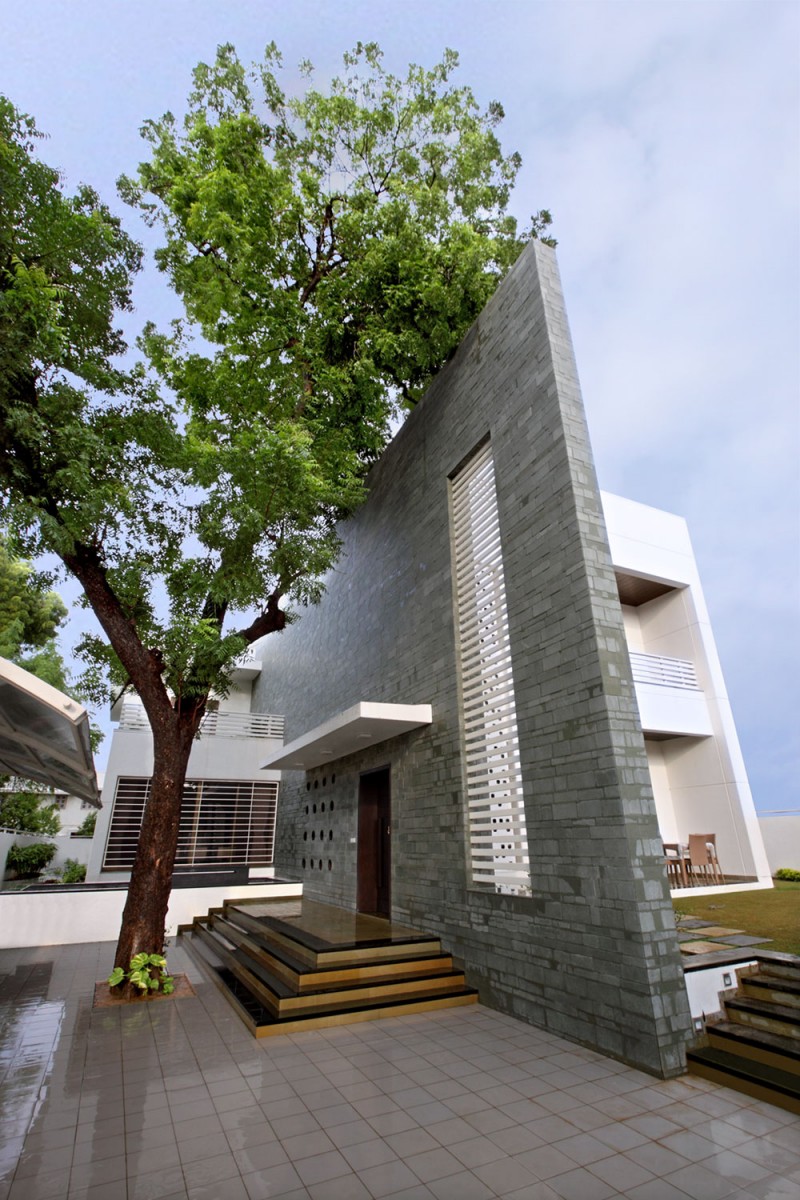 “The wall house, situated in Baruch, a city in the state of Gujarat, is conceptualized as an interior-architectural project, where there is no clear distinction where the architectural work ends and the interior work begins. Hence both feed off each other and complement one another in a way that unnecessary and superficial treatments are avoided.

The structure is bisected by a wall that physically demarcates space as well as influencing the character of the interior spaces.

Due to the narrowness of the plot, the wall house was conceptualized as a linearly planned structure partly bisected by a 34 feet high wall that also forms the main exterior façade of the house and is its main focal element-The Wall. This wall is clad with raw, unfinished kota, a stone indigenous to the Rajasthan region. The play of sunlight on this uneven surface creates interesting patterns of light. This wall runs through much of the interior spaces and influences the character of these spaces.

As we enter, a small foyer space is demarcated by 20 round cut outs in the wall and is treated with blue coloured glass. On one side a staircase runs along the kota wall and leads up to the upper floor. The slab above the staircase has a cut out. Light floods in from this cut out, and creates an interesting syography on the wall due to the shadows created by the pergolas.

The living room is very minimally treated. The concrete slab has been kept exposed and one of the walls has been treated with simple smooth plaster which has been left raw and unfinished. Light washes this wall from a pelmet finished with a cement board that merges with the plaster. The living area has a calming, serene feel especially with the light wafting through the sheer fabric curtains that cover the French door that opens out into the lawns of the garden.

The dining area is set back from the living area. Here slit like windows on the south wall are angled at forty five degrees. This allows light and the prevailing south-west breezes to enter the interior space while keeping out the direct rays of the sun. The dining area over looks an outdoor sit-out that appears to dramatically float over a water body. The passage between the living and dining areas opens out onto this sit-out through a large French door. These glazed doors allow for a dialogue between the interior and exterior space.

The transition from public to private spaces is marked by a change in the flooring. The white mirror polished Italian marble seen in the foyer, living and dining areas gives way to an earthy, mirror polished kota stone. Physically also these spaces are bisected by the kota wall. On the other side of the Kota wall, adjacent to the dining space is a home theatre space which doubles as a more informal living space which is used mostly by the family as a space to unwind. Here also the concrete slab has been kept exposed. This compliments the kota clad wall. One of the walls has an artwork that is a mural of a foot print.

In India worship is a very important aspect of one’s day. A special area for prayer, or ‘pooja’ is just off the home theatre space. Here the back drop to the platform where the idol is placed is clad with scoured white marble.

Next to the pooja room is an internal courtyard. Although this area has visual connectivity with the pooja area it is slightly secluded from it. A custom made swing hangs in this space. This covered, internal courtyard further emphasizes the dialogue between the inside and outer areas.

The bedrooms are located so that they get large private spaces. On the first floor the younger son’s room opens out onto a private terrace garden overlooking the kota wall and the garden. The bedrooms are done in warmer tones. Here wooden floors and ceilings have been use to add warmth and depth to the space.

Care has been taken to make this house more environmentally friendly. Openings have been placed to maximize the inflow of breezes, while reducing direct sunlight. Compact fluorescent lamps have been used in most of the spaces to reduce energy consumption and green rated air-conditioning systems have been used.

In the designing of this house there was no distinct architectural phase and interior phase. This is the reason why the interior work seamlessly merges with the architecture and both have almost a symbiotic relationship with each other. This was the main aim of the design- to avoid unnecessary and superficial embellishment.

The firm made rapid progress and has extensive experience in all fields of interior design, ie, residential space, retail spaces, office spaces, hospitality spaces and healthcare. The firm has also added several architects and interior designers to its core design team and has successfully completed more than 600 projects.

As the firm evolved, its design philosophies have also evolved – they lean more towards what can best be described as chic contemporary minimalism.”

The Library House by Khosla Associates

One Comment to The Wall House by Dipen Gada & Associates