This three story duplex residence is located in Shirokane, a district of Minato-ku, one of the 23 wards of Tokyo, Japan. 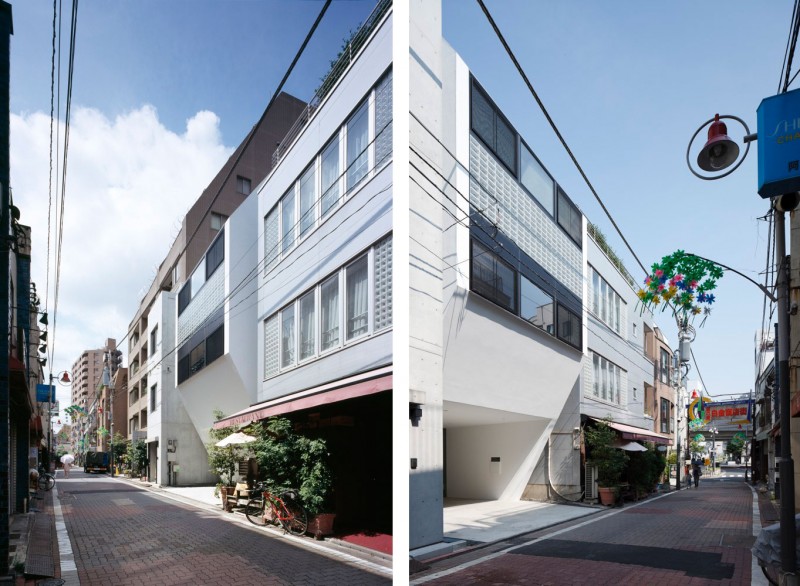 “The client for this project was a cosmopolitan, globetrotting manager of a bridge construction company in his 40s. Having previously lived abroad for many years, he had his mind set on building a two-generation house that could accommodate both his parents and his own family. The client purchased a new plot of land in a prime downtown residential district that proved compatible with the needs and requirements of his business.

Located in a commercial district that faces a shopping arcade, the site is surrounded by a mix of both old and new buildings that include old, established storefronts and factories. Since the site is encircled by medium-rise buildings and condominiums, it was difficult to ensure adequate ventilation and natural light within the house. These conditions also ruled out the possibility of creating scenic views “borrowed” from the surroundings. Therefore, the challenges we faced were mostly related to how we could bring light into the house and open the space up to the sky without being overly influenced by external site factors.

The first floor houses the children’s room, while the second storey contains a variety of compact, individual rooms, including spaces for the client’s parents, a bathroom and dressing area. The third floor boasts a number of unique features including a large stairwell and skylight, as well as a generously-sized family room that stands in contrast to the group of individual rooms on the second floor. Another distinctive feature of the third floor is its compact light well. The bedrooms on the fourth storey, which are visually connected to each other through the stairwell, direct one’s attention to the roof garden on the top floor in a natural manner.

The external facade of the building is made up of a combination of rectangular glass blocks, sleek sash windows and skylights that make a perfect match for the uniformly designed interior finished in cool, monotone hues. External wall insulation panels made of reinforced concrete that prioritize comfort and quake resistance were also installed. The distinctive entrance to the house, which features garage walls that have been cut away on both sides, presents a distinguished appearance to the street while also containing an element of playfulness.”