Completed in 2006, this 3,200 square foot loft in a former warehouse is located in the edge of Soho, New York City, USA. 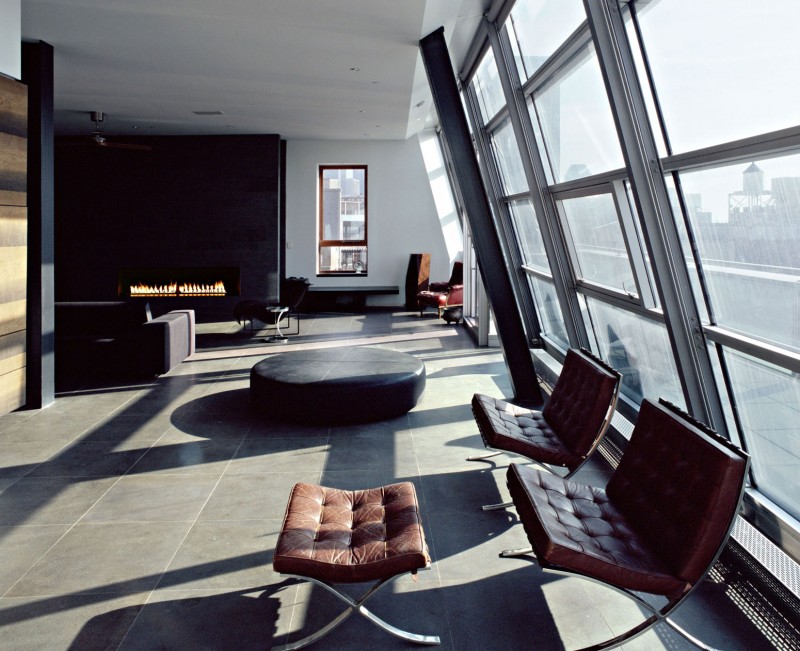 “Wrapping itself over and along an existing renovated six-story warehouse, the GW 497 building creates a suspended glass waterfall on the edge of New York City’s SoHo district. Eleven stories in height, the structure defines itself as a reinterpretation of the city’s strict building setback regulations. A process of mathematical inflection of the glass planes was introduced to provide a system that would transform the segmented façade into a more continuous set of glass ripples, thus creating a folded vertical landscape of glass and steel.

The 3200 s.f. Schein Loft is located on the eighth floor of the building, above the existing warehouse. The interior spaces are arranged as a series of overlapping zones rather than enclosed rooms. This open layout, in addition to the windows that are on all sides of the unit, welcomes a relationship to the outside and emphasizes views of the city.

Terraces are located on the East and West façades, one extending from the master bedroom and the other from the residence’s generous living and dining space. The latter, which overlooks the Hudson River towards the West, is accessed through the faceted glass curtain wall. Natural [west] sunlight floods the interior living spaces through this side of the building, allowing for passive solar energy to be gained by the concrete floor in the wintertime. This double-glazed façade acts not only as an impressive viewport to the city but is in fact a highly insulating element for the home. Two layers of ¼” glass with heat-absorbing low-e film on the outside layer make for a quiet internal environment and for a stable climate with little additional heating and cooling. The lighting, ceiling fans and the window shades, which react to climactic changes, are efficiently controlled by an intelligent home system.

The interior spaces are intended to be comfortable and relaxing, withdrawing the residents from the busy urban environment below. Natural materials inundate the spaces while the spine, a sculptural structure that runs through the loft, defines boundaries softly rather than rigidly and provides an aesthetic language that is casual and warm. The structure is composed of a thin black metal frame and recycled bogwood veneer, an oakwood that, after having been buried in peat bogs and preserved from decay, is naturally stained by tannins in a blond and black pattern.

As the main artery of the loft, the spine distributes the private spaces adjacent to its organic structure and moves light and air from one end of the residence to the other. It holds a freely suspended ceiling plane, which provides cooling, heating and fresh air, thanks to a built-in humidifier and air purification system. The music room, guest bathroom, master bedroom and adjacent bathroom grow from this smooth and softly lit axis.

Essentially an extension of the living quarters, the master bathroom has a spa-like and escapist quality, complete with overflow bath and steam shower. Other interior features include a 7 ft long fireplace, built from materials from local stone quarries, and art storage areas that are integrated into the anatomy of the residence, either as extensions of the bogwood structure or as spaces concealed by pivoting walls that seamlessly blend into the space.

All these elements combined – the environmental, spatial and aesthetic considerations – make of the Schein Loft a most adequate place for finely-tuned living, a sense of balance and order permeating the whole.”