Mountford Road was originally a post war home located in New Farm, Brisbane, Australia  that was updated in 2011 by Shaun Lockyer Architects.

452 square feet were added to the existing 1,722 square foot structure. 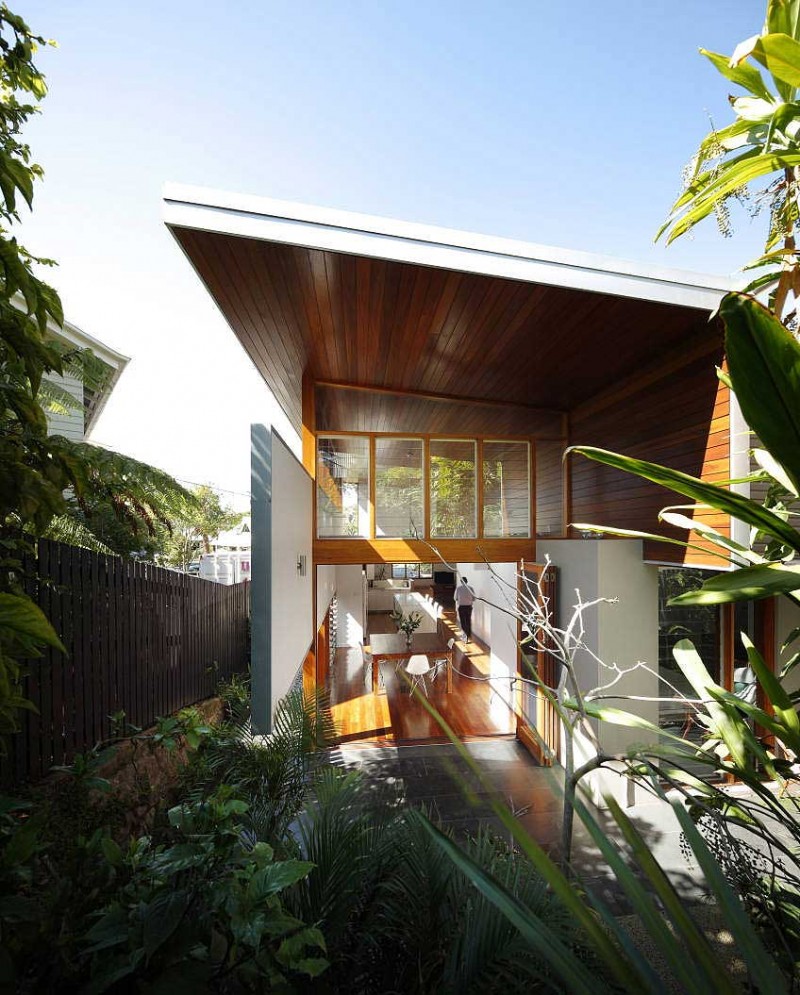 “The “Mountford Road” project is a small but dramatic intervention into a 1950’s post war house, originally designed by the “Bell Brothers” (also well known for their furniture). The design exercise comprised essentially two aspects to the brief; the first being about the pragmatics of accommodation needs, while the second was about light, volume and air.
The pragmatic side of the brief was about providing a more cohesive living, dining and entertaining space that could better connect with the existing outdoor courtyard. This part of the brief was satisfied by adding only 40 square metres whilst reorganising the balance of space within the existing house. Ultimately a new kitchen, laundry and dining space were added in the new “pod” while the living room, outdoor courtyard and entry where recalibrated within the exiting fabric.

The more “aspirational” side to the design was about maximising the north light and engagement with the external environment, while trying to mitigate loss of privacy from planned extensions from an adjacent property. This part of the brief gave rise to a double height timber clad extruded space that was punctuated by high and low north windows which offered controlled views and free access to light and sun. The rear wall of the “pod” forms an aperture to a pre-existing established garden court that forms a rich but calm backdrop to the minimal, stark space. The scale of the space is also varied between the older, more compressed living room to the liberated volumes of the new.

Pragmatically the design offers controlled, private and secure entry into the “rihad” or private courtyard via a redesigned entry albeit in the original location. This “rihad” is the fulcrum about which the new and the old part of the house balance themselves. The entry sequence into the house itself remains as it were albeit with new crafted timber doors that afford the greatest possible connection between the internal and external spaces. The new “pod” also offers winter and summer alternatives to the outdoor accommodation such that the space can be fully utilised year round.

The new materials used in the house were envisaged to compliment the pre-existing brick and timber fabric. New (but distinctly different) weatherboards articulate the new “pod” while the use of timber internally offers a more direct but equally contemporary connection to the work of the Bell Brothers. The restrained palette is deliberately conceived to reinforce the idea about the space being a blank canvas for light, air and life to furnish. There is quietness to the space while still offering richness and contrast that comes from the rich timber and white wall contrast.

This is a small project but an intimate one. The outcome is a reflection of the client’s life, interests and passion. It is a house designed for family to gather, grand kids to play and friends to visit. The architecture it there to serve life’s greater needs and the outcome is reward for the client’s hard work throughout the process and more broadly, their lives. There is a real sense of joy within this project that we hope will resonate with all who should experience it for themselves.”

Casa do Sol by David Guerra Architecture and Interior