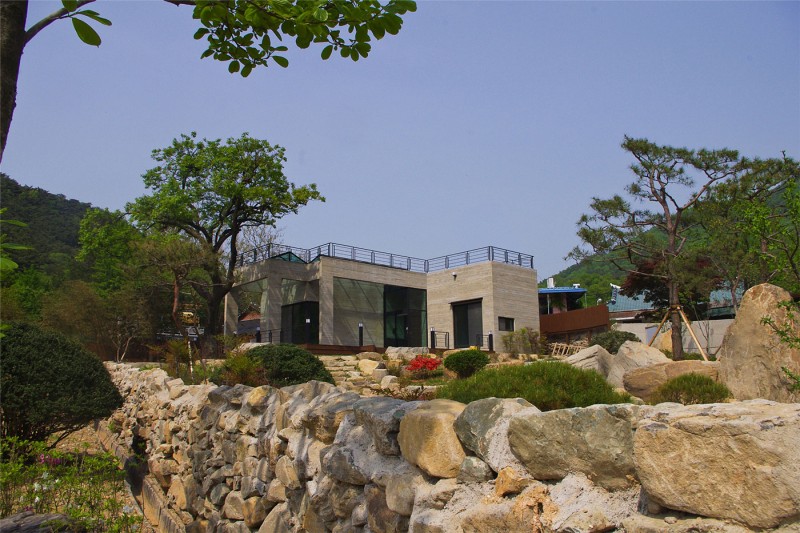 “The concept for this house came from the idea of ‘Sunday’. I used to meet the client and we would work together on Sundays, and so I wanted a house with a relaxed atmosphere like music for a Sunday afternoon.

The house is situated in Gwangju (meaning ‘City of Light’ in Korean), which is the fifth biggest city in Korea, also known as the ‘city of art’ and the location for the Gwangju Biennale. The client of this house is a renowned artist in his 70s, famous for his modernist style paintings that deal with the concept of ‘family.’

To meet the client in Gwangju, 300km away from Seoul, I used to take an express bus every Sunday morning and arrive around lunchtime. I would stroll around Mudeung-san’s hillside and return downtown for the meeting. While drinking a cup of coffee in a cafeteria near ChoSun University, I would be all-ears to the opinions of the client and his acquaintances – two retired professors, and one just before retirement, who looked like ‘gurus’ from the Korean movie ‘JeonWoochi’, released several years ago.

Whenever I ride the express bus, I would sit at the front and listen to ‘gayageum san-jo’, traditional Korean music, for 3 hours. San-jo was a new music style that emerged from this country at the end of the 19th century. It was a time when the Joseon dynasty that lasted for almost 500 years, was in decline. The class system was dismantling, and a call for a new era that would replace the feudal system was surging. Therefore, San-jo is a healthy music style which reflects the social consciousness of the people and the time itself. While other traditional Korean music was for ceremonies or rituals and therefore putting function over sentiment, San-jo stresses the writer’s subjective interpretation and feelings, incorporating human emotion and thoughts into the music.

The melody of San-jo started in a slow tempo and got faster and faster, until it became comfortable to my ears and I fell asleep. The melody mingled with the land I saw, and the building that should be built on it came to me like in a dream, and I woke me up with the slow and relaxing finale by the time I got to Seoul. I thought that the house should resemble San-jo, whose simplicity contains three-dimensional diversity, showing continuous spatial flow as one goes deeper and deeper into the space.

It was my first visit to the mountain, though I have seen it from a distance. Gwangju and Mudeung-san have a special meaning more than just a city and the mountain that surrounds it. Although its slope is mostly gentle, Mudeung-san is 1,187m, which is very high for a mountain bordering a major city. Because it is mostly made of rocks, the mountain used to be called ‘Mudol-san’, which means sacred stone, but it changed to ‘Mudeung’, since it was affected by Chinese characters and Buddhism. The sight of Mudeung-san’s west hillside, where dozens of stone columns are standing in a row, is quite unusual. Mudeung-san is a strangely comfortable mountain; similar to Jiri-San but not muddy as such, decent but not as stubborn as BukHan-San in Seoul. It blows gentle breath into one’s pain.

Once I stepped into the land and looked around, I felt like the surrounding mountains were putting their arms around one another’s shoulders, as though they were doing vocal exercises. The land was all stones under a handful of soil and weed, and unctuous rocks were lying on the ground leisurely. Black, angled rocks, peculiar to Mudeung-san, were staring indifferently at people who were coming and going, and small streams on both sides of the land converged with each other. I wasn’t sure about the exact location of the land in Mudeung-san, but it felt similar to Silsang-sa in the middle of Jiri-san, except for the scale. An old apricot tree was standing in the middle of the land, and to the west were the 8 peaks of a mountain range that appeared to be walking in a line, which the client liked so much. There were numerous crape-myrtles bustling like Orc warriors on the west field.

The old artist, who bought this land when he was young, used to come here whenever he had time, to look at the range to the west as if he was listening to San-jo. He finally made a decision to build a house after 30 years. It took such a long time to build a small house of 15 pyeong (49.5m2), and its process was extremely difficult as well.

The main purposes for this house are firstly for painting, secondly for watching the walking mountains on the west, thirdly for the artist to watch with contentment his wife, son, daughter, and grandson, fourthly for looking at the handsome apricot tree that has been protecting this land for years, and last of all for beholding the surroundings of the huge rock next to the land where the house sits. Except for painting, which is active, every reason is passive. The act of ‘seeing’ is the main program of the house. Thus, the mass of the house has a simple plan, comprising of a studio-cum-living room, a bedroom, and a kitchen that bridges the two spaces and connects to the outside deck.

The main view of this house is of course towards the 8 peaks walking together in the west. At first, from habit, I reduced the size of the window on the west side and put a large one on the south side so as to avoid the harsh afternoon sun, but the client, who favors the west view, strongly opposed, and so I decided to put a large window on the west side with confidence. Although the interior is compact, I installed pocket-like decks here and there on the exterior to accommodate diverse uses connected to the interior. The axis of entrance was designed so that the apricot tree, old but strong, and the pomegranate tree, which recalls the works of Giacometti, would be inserted into each other’s scene, as if two different scales were meeting whenever one enters or exits.

I considered the rock in the front yard to be the small tip of a huge rock underneath, so the house would be ‘the house on the rock’. Numerous rocks came out during construction, and since it was prohibited to take the rocks of Mudeung-san anywhere else, it took some time for me and the client to figure out a solution. Eventually, we put a huge pine tree in the background and the client himself placed rocks as if he was painting on a canvas.

To summarize, this project was nothing but sitting a small house on a hillside where rocks are scattered. The client, who has overcome childhood hardships and become a successful artist, thinks the bond between family members and friends is the most important. That may be why the rocks standing in the middle of Mudeung-san, a land that makes people happy just by looking at it, look like grown-up children. The house is standing just like them, anchorined on the hard ground, like a rock that has always been there.”

House in Matsubara by Fujiwarramuro Architects