The writing is on the wall for this 2004 project in Bologna, Italy by Studio Marco Piva.

The interior of the hotel uses typographical elements and excerpts from stories of travel to decorate its interior. 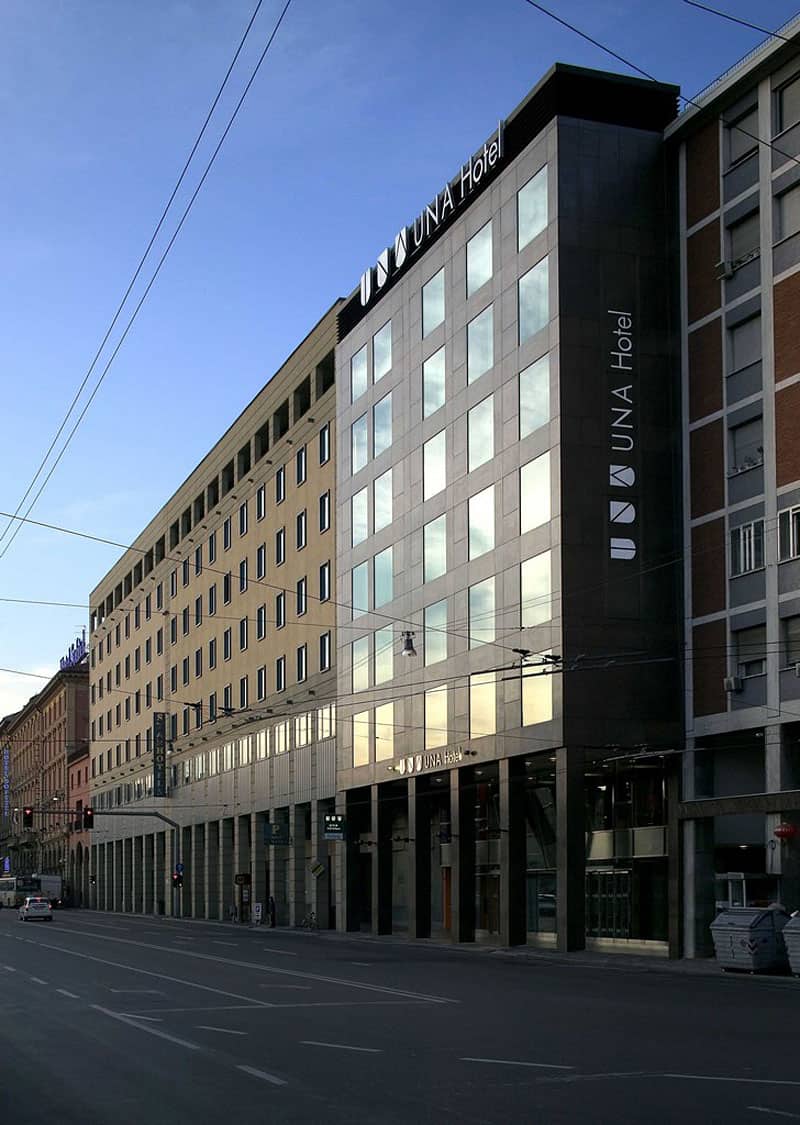 “For my new hotel project, situated opposite Bologna railway station, I wanted to develop a particular concept that would enable me to “construct” a place dedicated to business tourism, located in the throbbing hub of one of the most active cities in Italy, still a pillar of thought and of Western history.Bologna is in fact the home of one of the oldest universities on the planet, as well as one of the most active trade fair sites in Europe.

The first reflection stems from the fact that some places, even if not characterized by especially “strong” elements from the scenic and monumental standpoint, nevertheless possess other reference values useful for the construction “in situ” of a new element of the architectural and social scenario.

After playing a leading cultural and social role for almost 1000 years without interruption, Bologna is still fully active as a place of exchange between cultures.

This is fundamentally due to the intelligent mental openness of this city towards everything that is complementary, different and new.  Like any other meeting and exchange venue, Bologna functions as a crossroads of habits, customs, languages and thus also of writings.

It therefore seemed to us to be consistent to adopt writing as the unifying and descriptive element of this new “place” dedicated to tourism. This is why certain languages/writings were chosen to denote the convergence of the various cultures.

The other conceptual assumption that we found particularly interesting and synchronous with the theme of designing places, like the one in question, dedicated to movement (those that describe non-domestic spaces, resting places, places of transit, refreshment and sleep) is that of the relationship between writing and travel.

In every culture descriptions of travel and of the places and the people one meets convey a sense of surprise, of the unexpected, or even of wonder. Through an interpretation of a journey formulated from memory or from the excitement of the account, writing presents a transformed version of reality.

We therefore decided to select certain symbolic writings to imbue our new place with a little magic, chosen from among those that are mainly linked with travel stories or travelogues.

A common characteristic of the selected texts is that they narrate the adventures, the impressions and also the exploits of great travelers, whether they made a real voyage, like Marco Polo, an interior journey, like Rama or an epic journey like Ulysses.

From some of these written accounts we chose an excerpt, then a phrase linked to a particular place or landscape, and then, finally, the letters that make up a word to create a graphic device that characterizes the hotel’s settings and accompanies the contemporary traveler.

After this research I wanted to create a story of my own, “Idiom X”, an invented and encrypted account of a journey in the future, on a planet of the Solar System of the star Maris.”

The Encanto Hotel by Taller Aragones

Remodeling of an Italian Guest House by Marco Innocenti

One Comment to Una Hotel Bologna by Studio Marco Piva