Located in Sao Paulo, Brazil, is the Casa Panama by Studio MK27.

This contemporary home was completed in 2008, features three levels for living and numerous works of art. 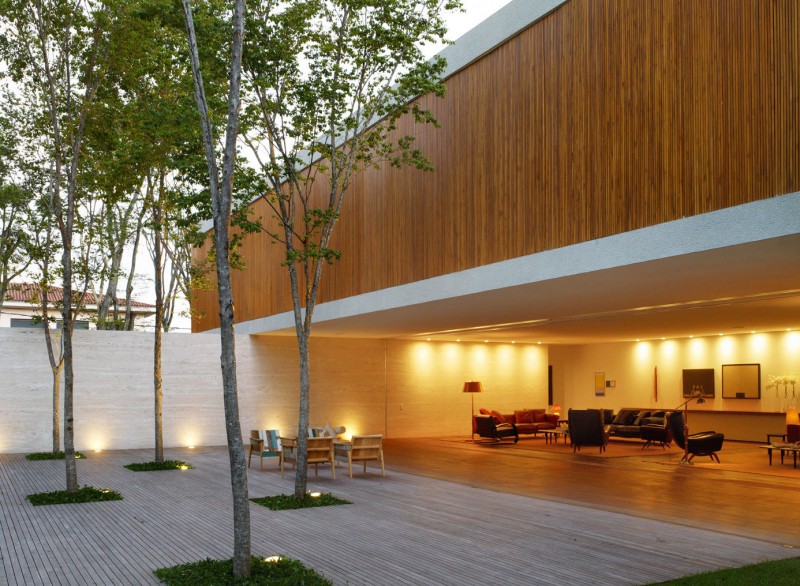 “The site of Casa Panamá is located in one of the garden neighborhoods, just some blocks from Paulista, the financial center of the city of São Paulo. The client has an important art collection, above all, modern Brazilian art, and the house was designed to house this collection. The works of art are scattered throughout all the areas of the residence, from the bedrooms to the gardens.

The interior plan is organized into 3 floors and a sub-solo. Upon entering the lot, a tree-covered patio leads the guest to the door. A social hall distributes part of the program of the house: a library, vertical circulation, the utility rooms and the living room. From within the library you can see, in front of the exterior stone wall, a Maria Martins sculpture, reposing over a reflecting pool. The living room has large spans that open, in their entirety, to the garden, building a spatial continuity between interior and exterior. In the garden, the pool, installed on the side of the lot, mirrors the stones of the wall.

On the second floor, a large corridor connecting the bedrooms also works as a gallery exhibiting the paintings and sculptures. Two windows, at the ends of the corridor, bathe this area with light and, in front of one of them a sculpture made by Brazilian Amilcar de Castro constructs the space. An office annexed to the master suite overlooks the garden, as do the other bedrooms. The façades of the rooms have brise-soleils made of sliding vertical wooden lathes. The brise-soleils are important to guarantee greater comfort, protecting from direct sunlight and creating a texture with the light. One of the architectural premises of the house is to organize the space from a wooden box that is placed inside a C-shaped concrete cask. This concrete cask is formed by cement slabs and a wall and, in relation to the wooden box, determines the translucent and transparent areas. On the third story, a game room and an gym connect to a wooden deck, the terrace of the house. The utility rooms of the house and the garage are located on the subsoil.

The stone and the wood, materials that refer to traditional Brazilian building, are mixed with modern materials, such as reinforced concrete and plastic and which create an architectural language. Reflecting concern with the precision of the construction, all of the details of the house were elaborated by the office, even some of the furniture that was specifically designed for the house. “