Maracanã House was constructed by Terra e Tuma Arquitetos Associados in 2009, and is located in São Paulo, Brazil.

The home juxtaposes the urban aspect of concrete brick walls and chain-link railing with palm trees, green vines, and other vividly green plants – the effect is irresistible. 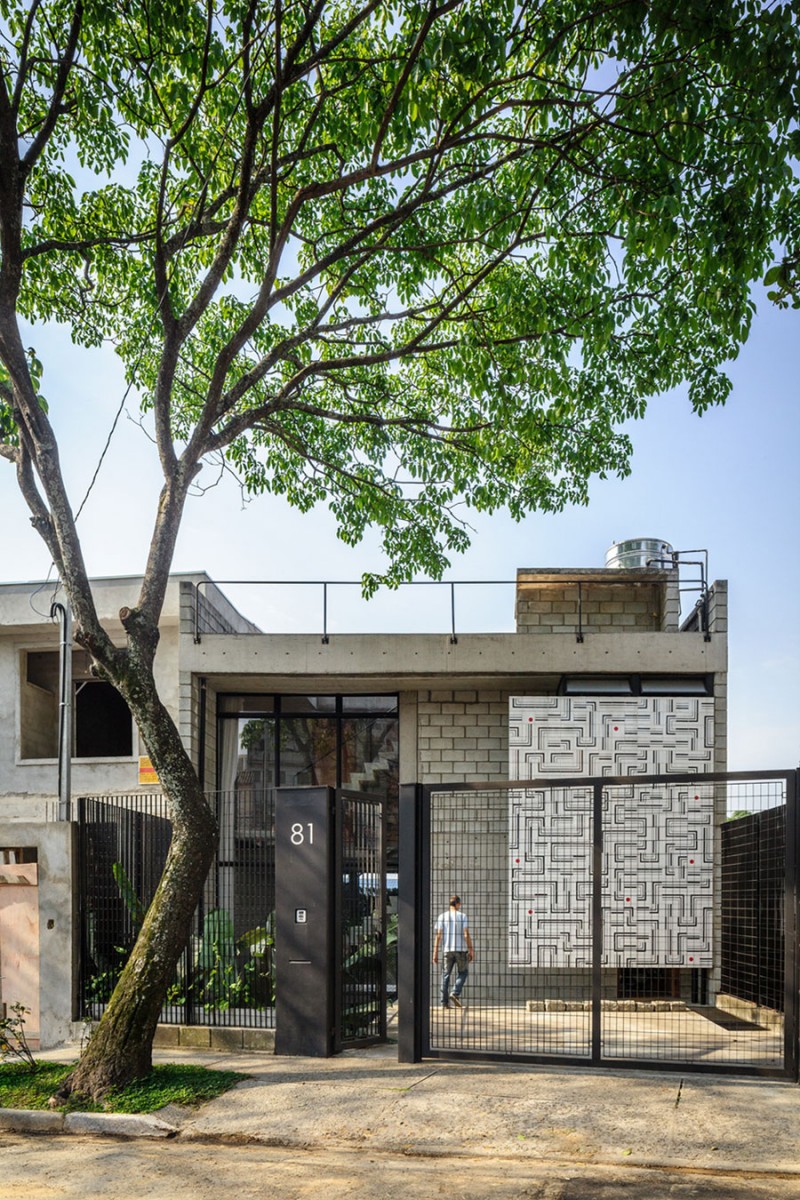 “São Paulo. In this city, which contemporaneity is able to perform the most extraordinary urban contrasts for us, living can reveal an encouraging condition.

In search of a place where this could be experienced, the idea of an elementary residence acquires the character of a happening. Thus, as this house decided to silently place itself at the westerly metropolitan meanders, is how it is presented at Maracanã Street.

The plans which define the geometry – opaque in grayish materiality, clear in glass surfaces or vibrant on the access mural – shows its presence like a new event around the bucolic surroundings, where curious people wonder this new construction. Its discordant geometry in relation to the traditional houses of the neighborhood surprises upon the moment when it conceals any territorial definition, admitting as an element and as a public event, takes possession of the street which allows to be perceived. Through its whole property’s occupation as it is available, it shares its limits as if internalizes the surrounding and though arises its unique place.

More than a space, its levels gradually form a path through which outside and inside merge in a proper and continuous shape. The house discovers new possibilities to the limitations of the scanty plot, whose complexity exceeds horizontal and vertical routes which invariably leads to a new spacial experience, capable to elucidate singularities of the district’s geography.

Being in the house of Maracanã Street is being in Lapa; is to live together with its peculiarities, stamped in the expectation to discover until where its spaces can conduct us and the possibility it offers the contemplation of neighbours reddish roof constructions and the church facade which crowns the district, while the sunset at São Paulo’s horizon gets unveiled.

Entering the house doesn’t mean to set apart the city, which leads us to it or to close off a disconnected universe. Its access has to be discovered from behind the ceramics mural painted in black, white and red compositions. Entering the house means, simply to transpose a succession of spaces, now narrow, now lightened, now shady, which leads us always to new experiences.

The house’s arrival happens from the emptiness, which is a viewpoint to the living space and also an identification area of its functional sections: social and services below, intimate above. Like the city streets, the lights between their spaces enlightens every directions, through big glass openings which sets against the solidity of the concrete materiality which it is built.”