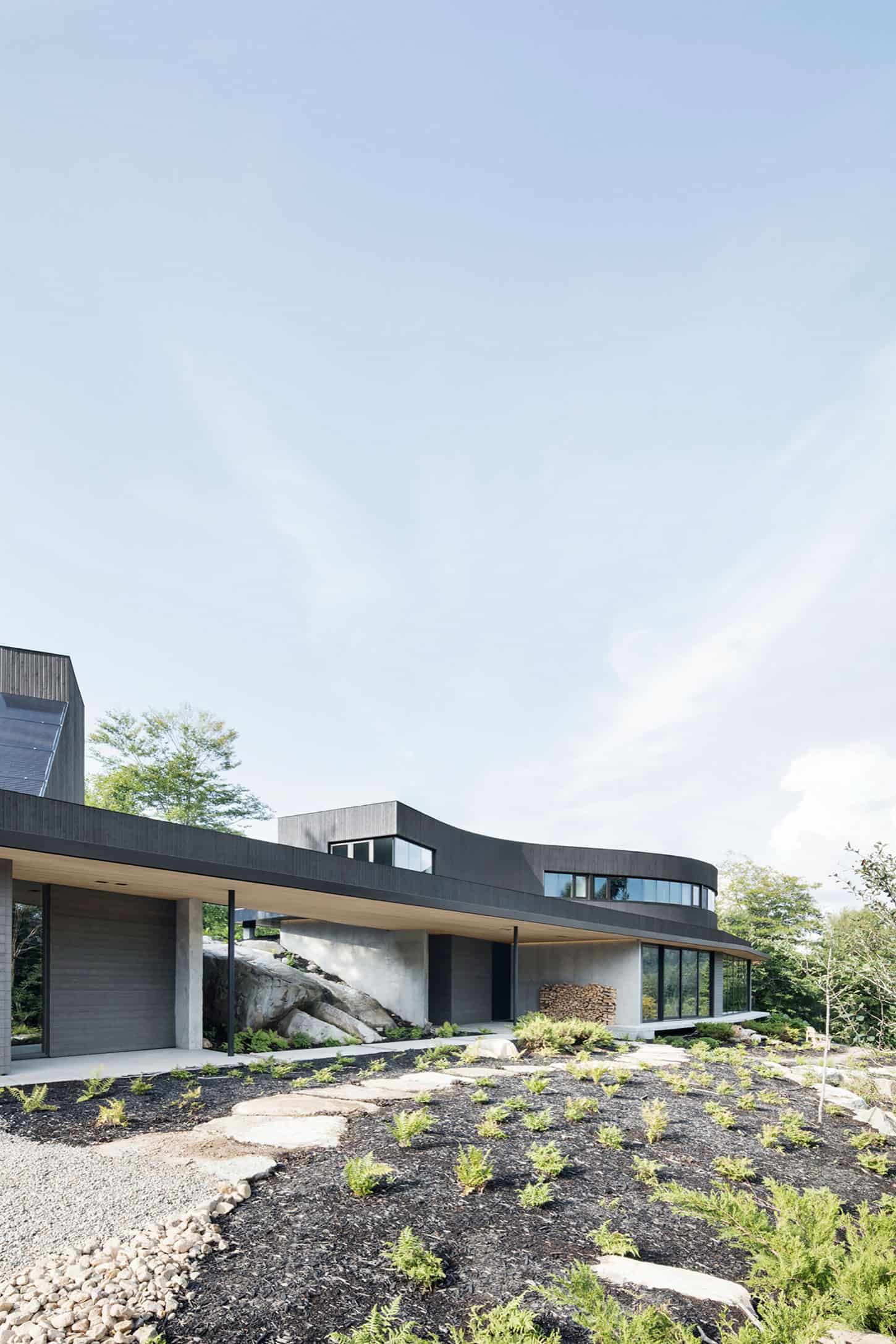 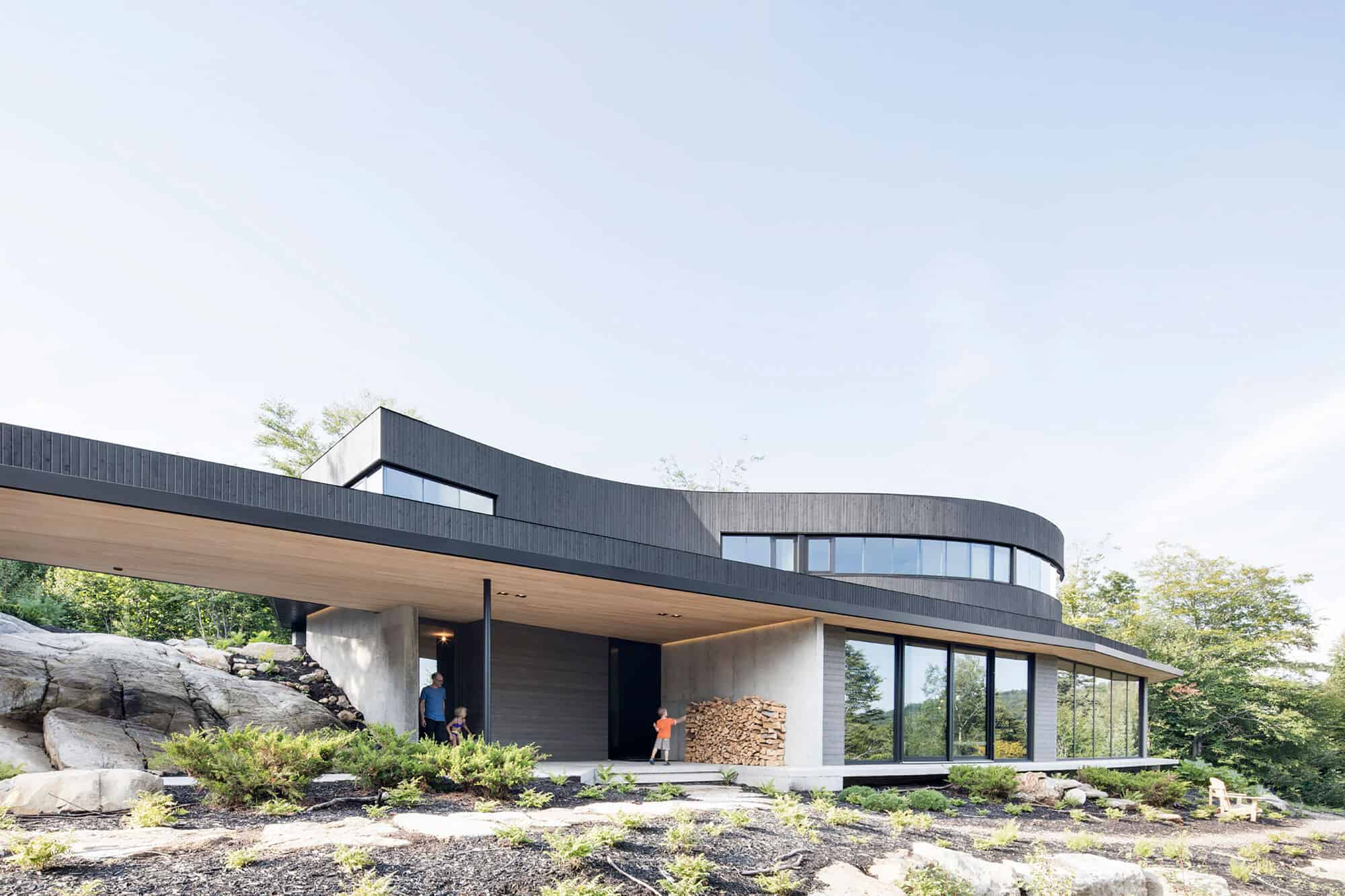 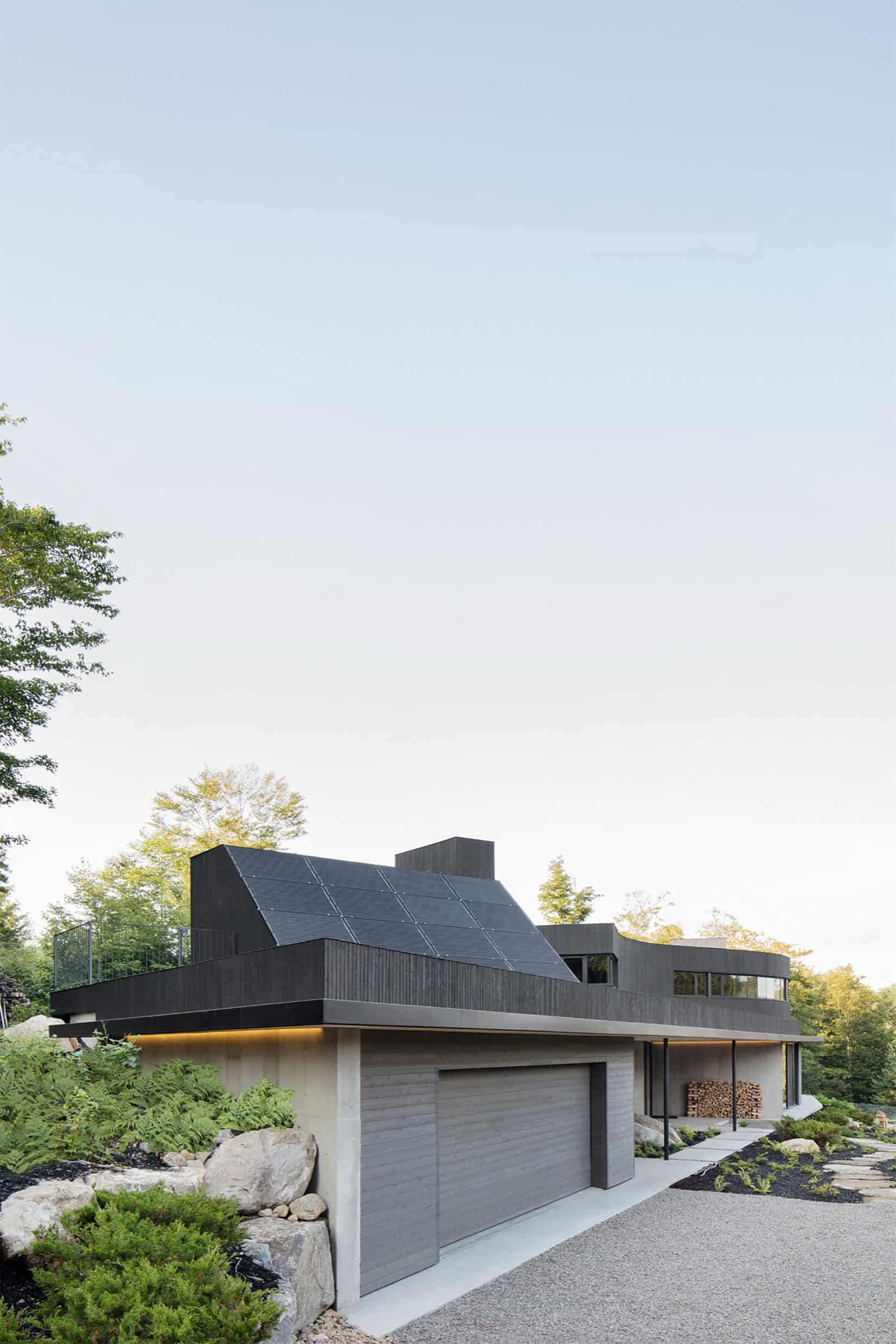 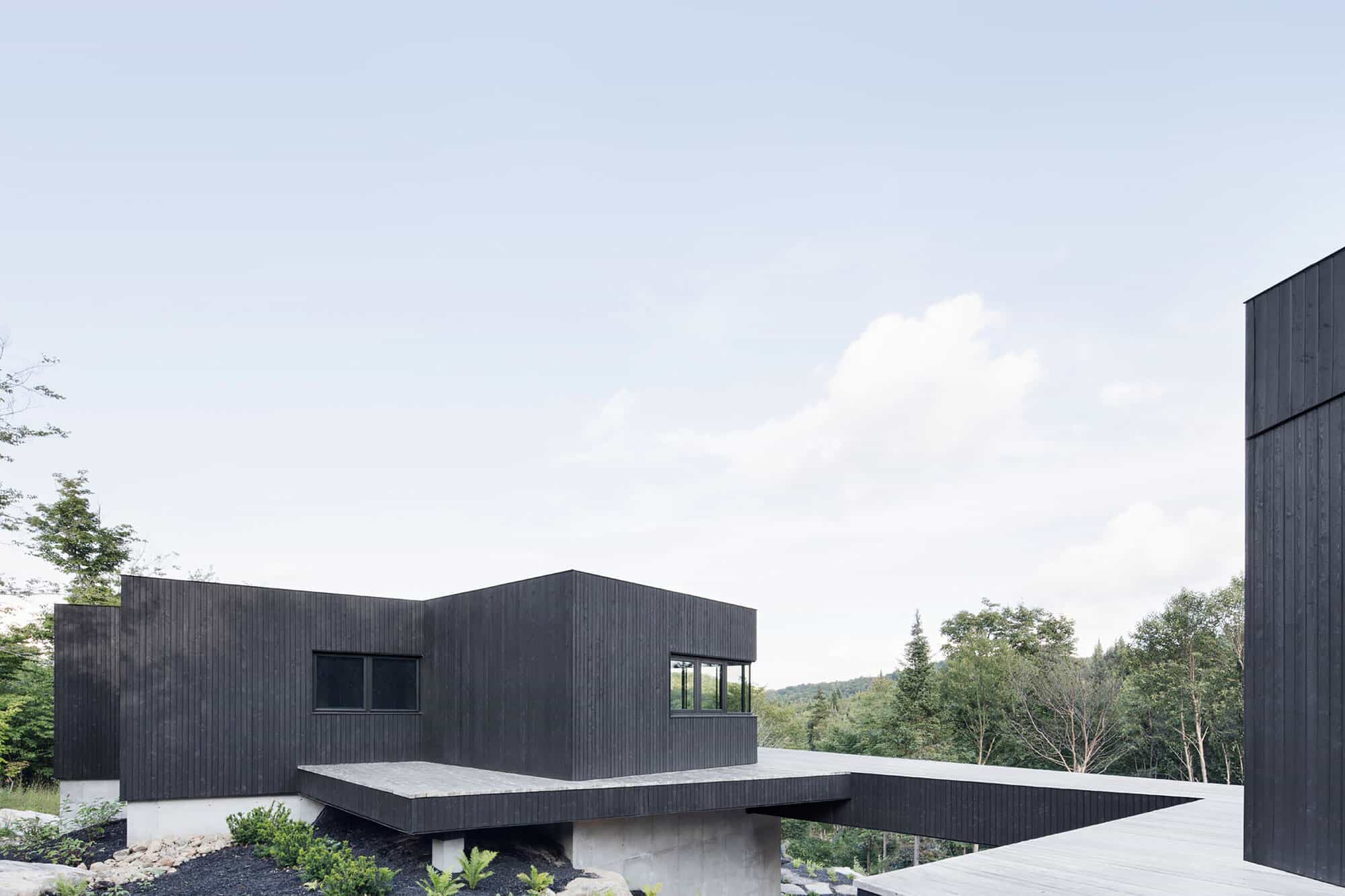 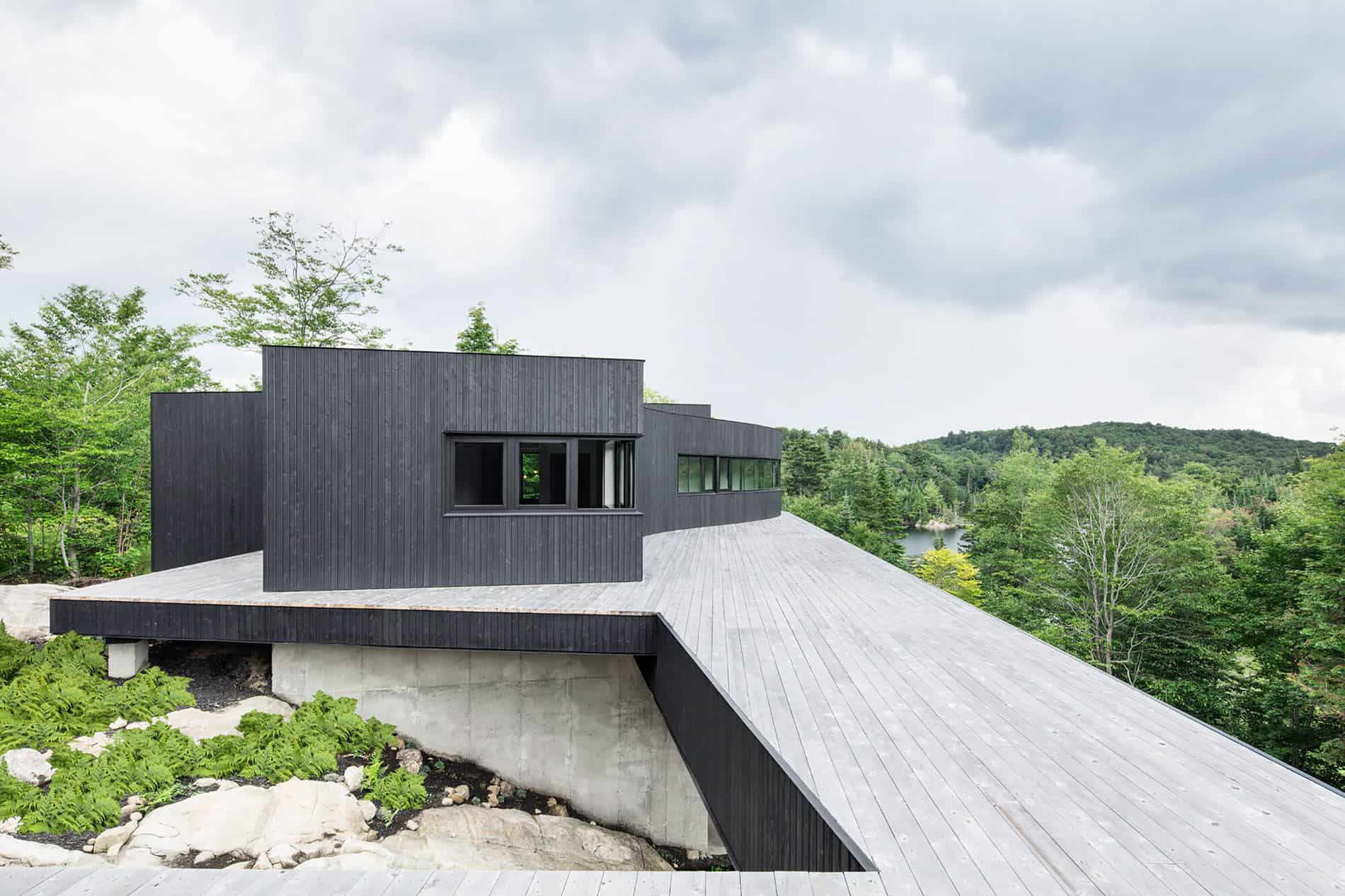 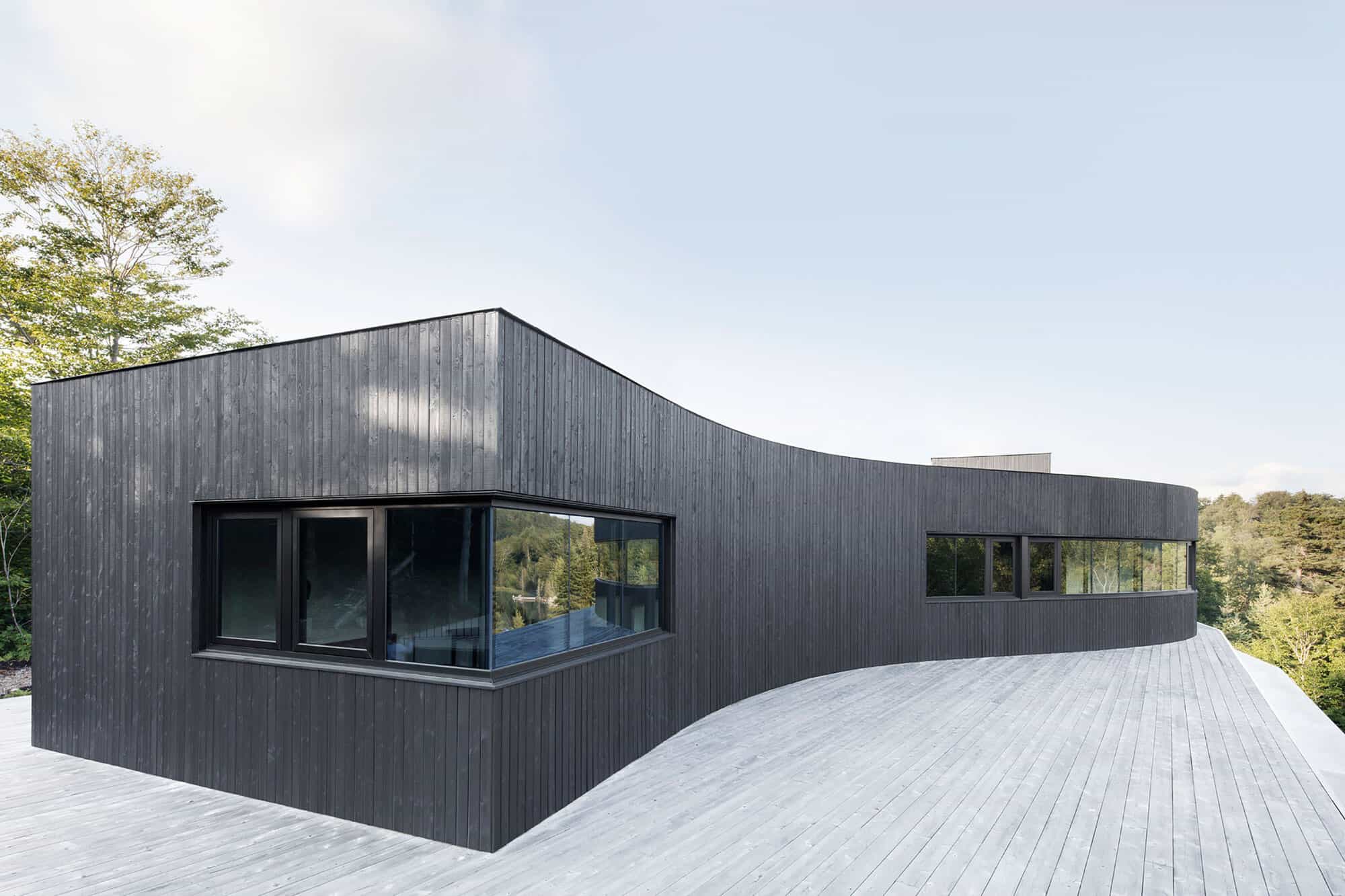 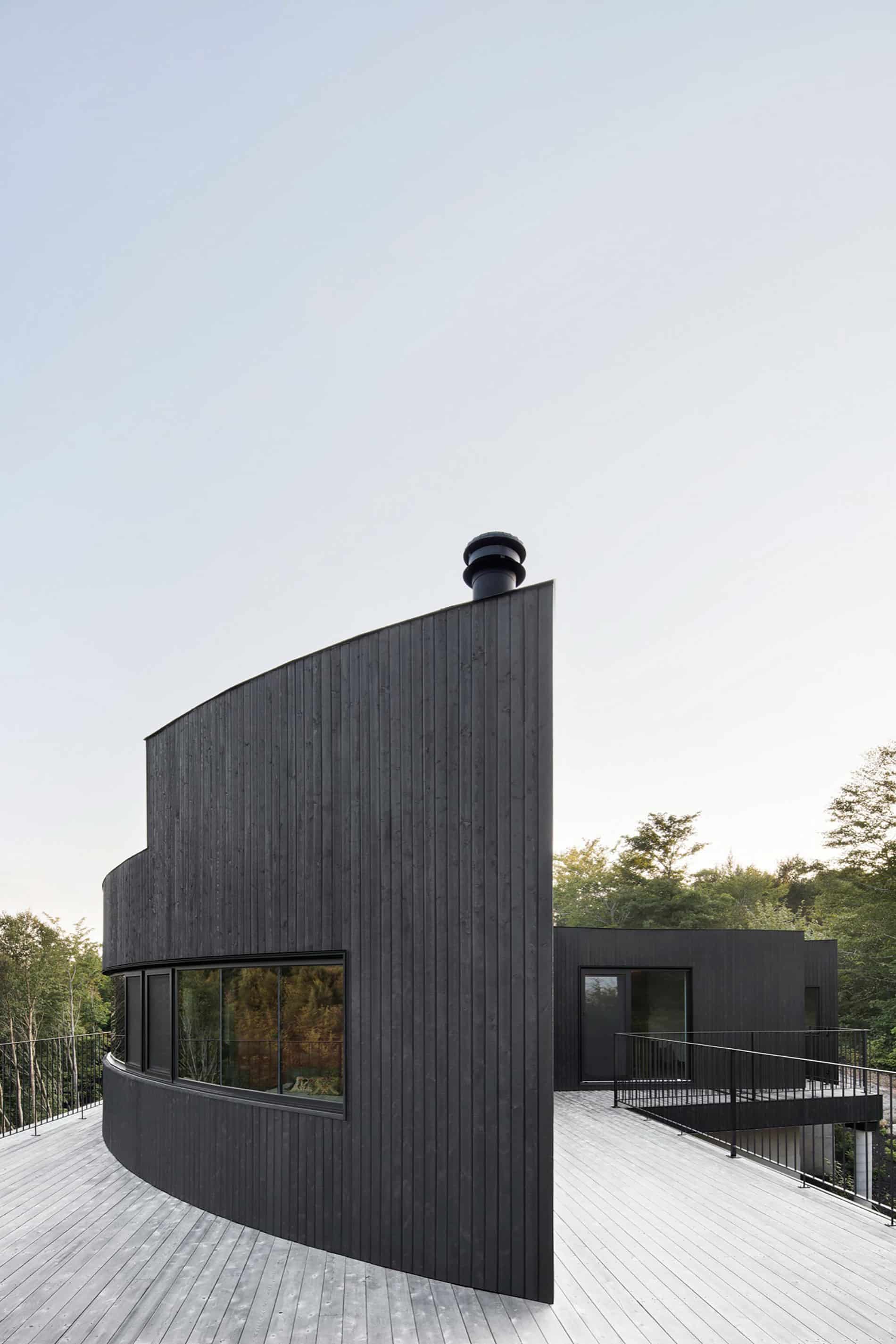 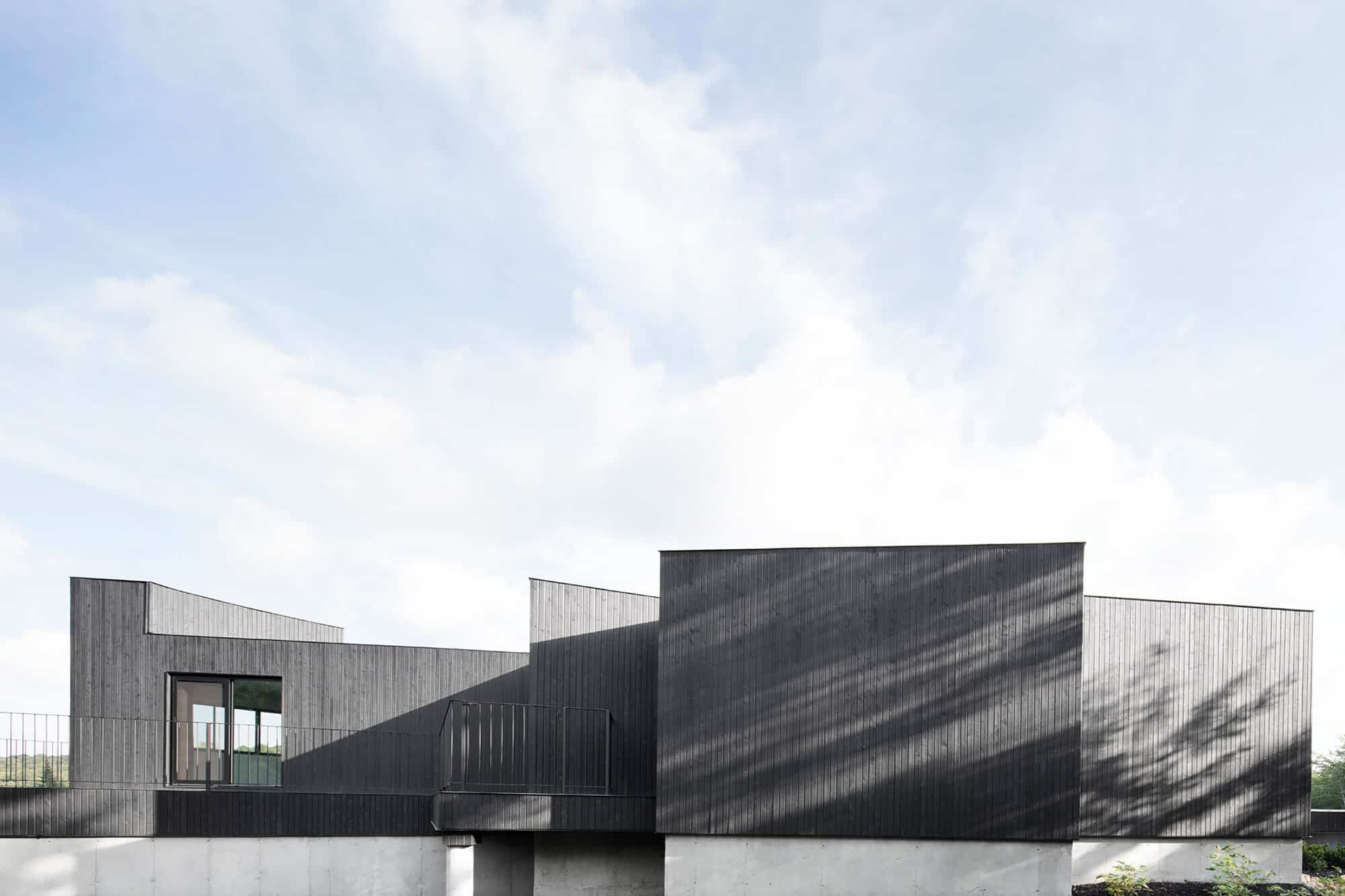 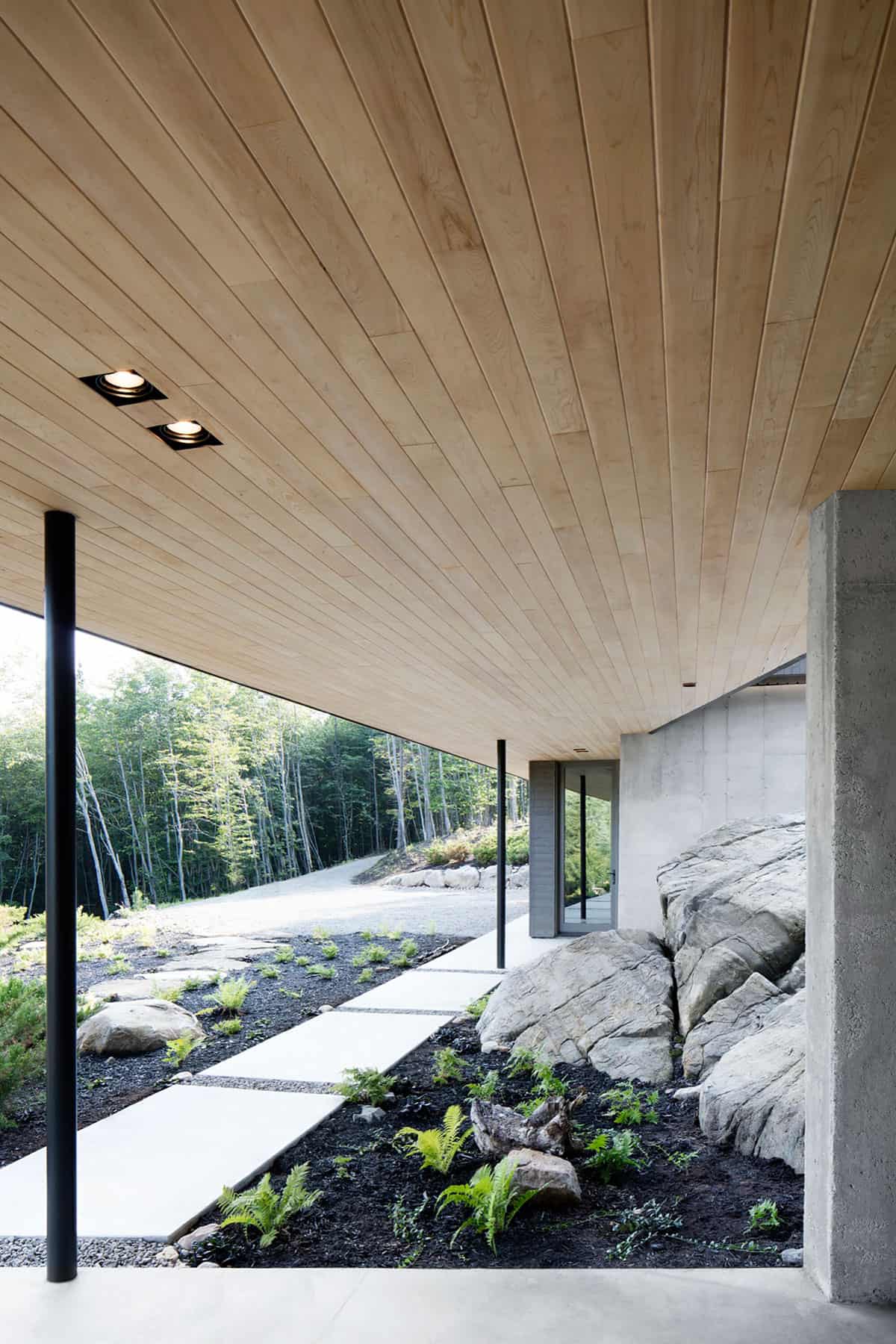 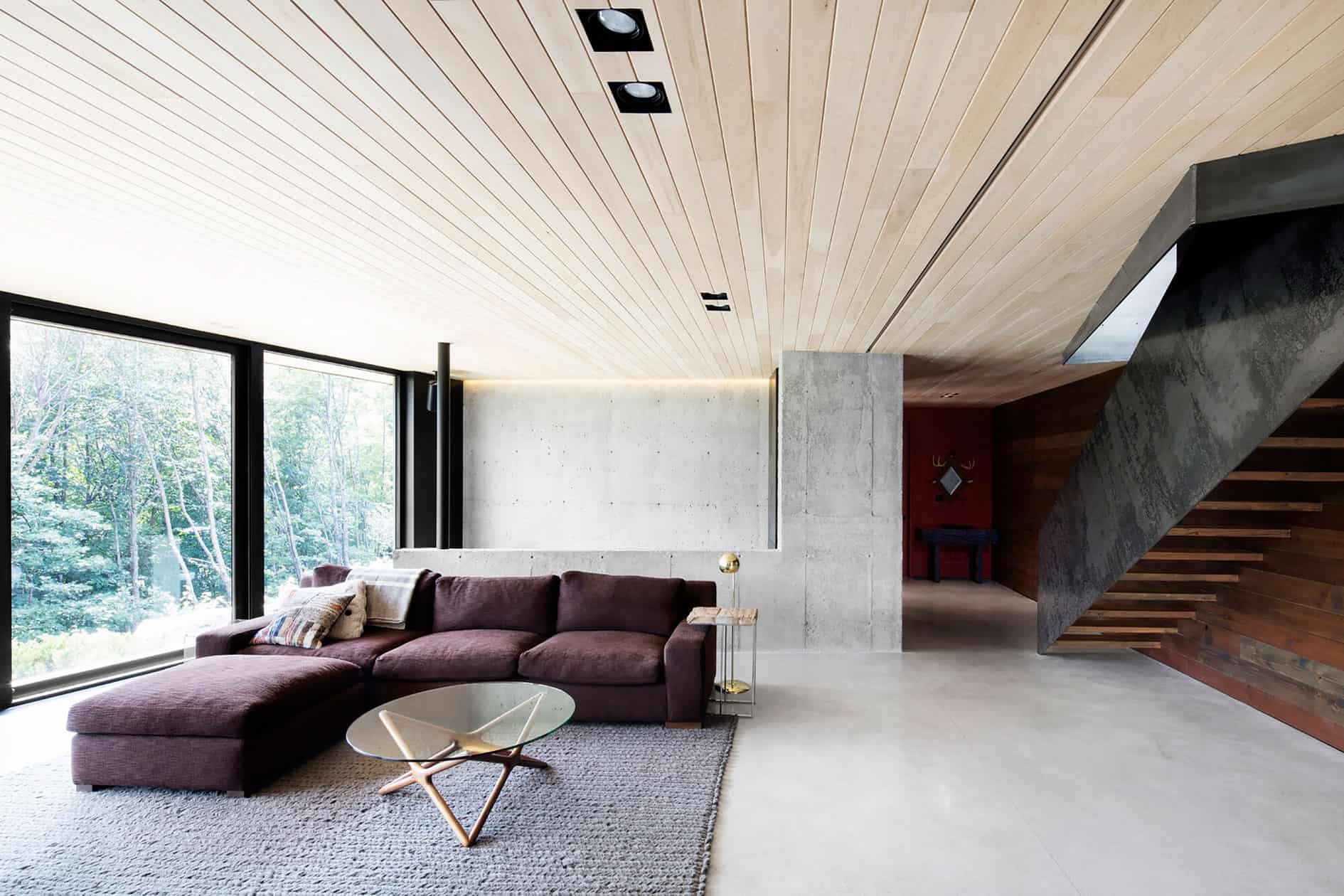 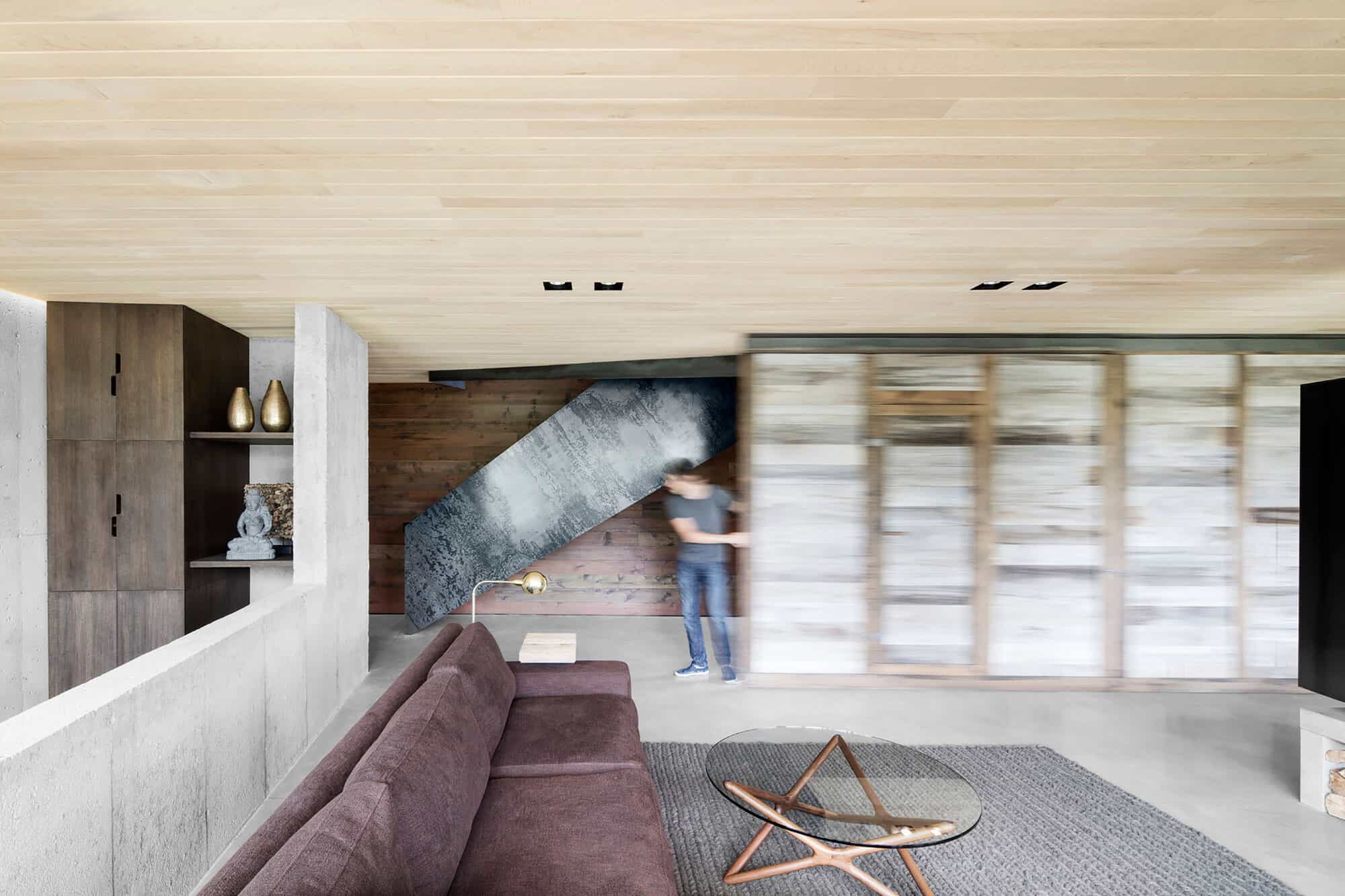 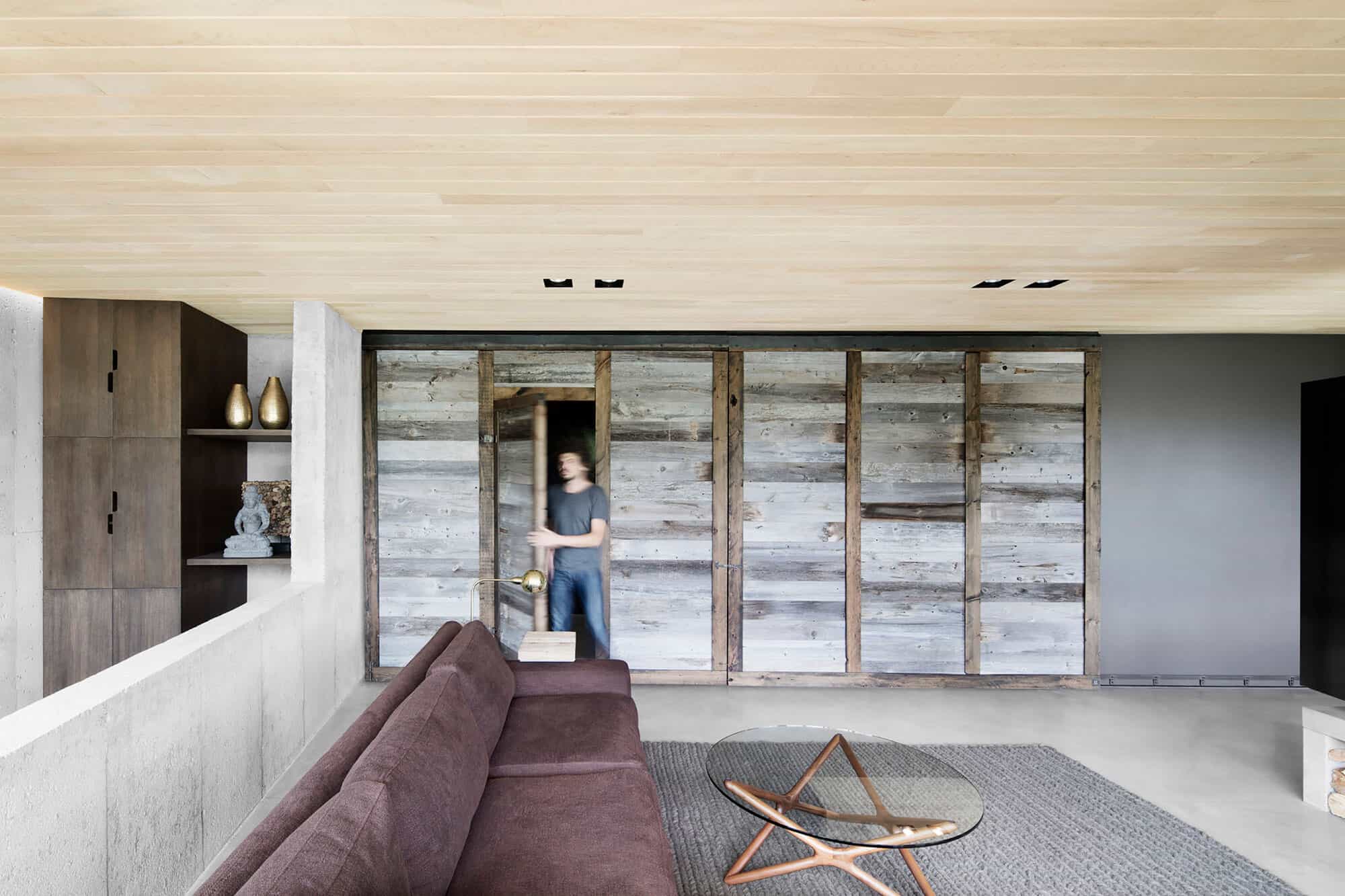 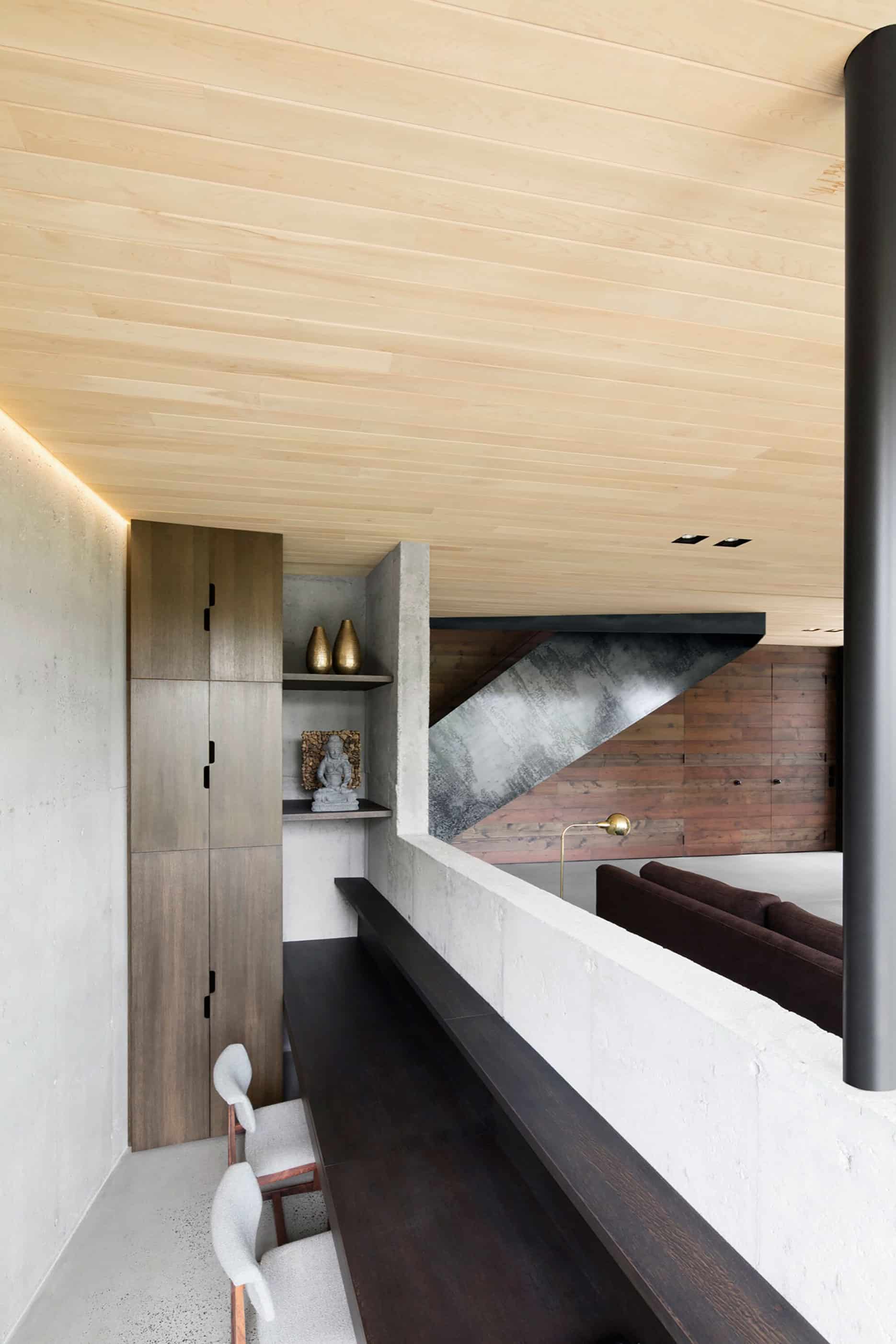 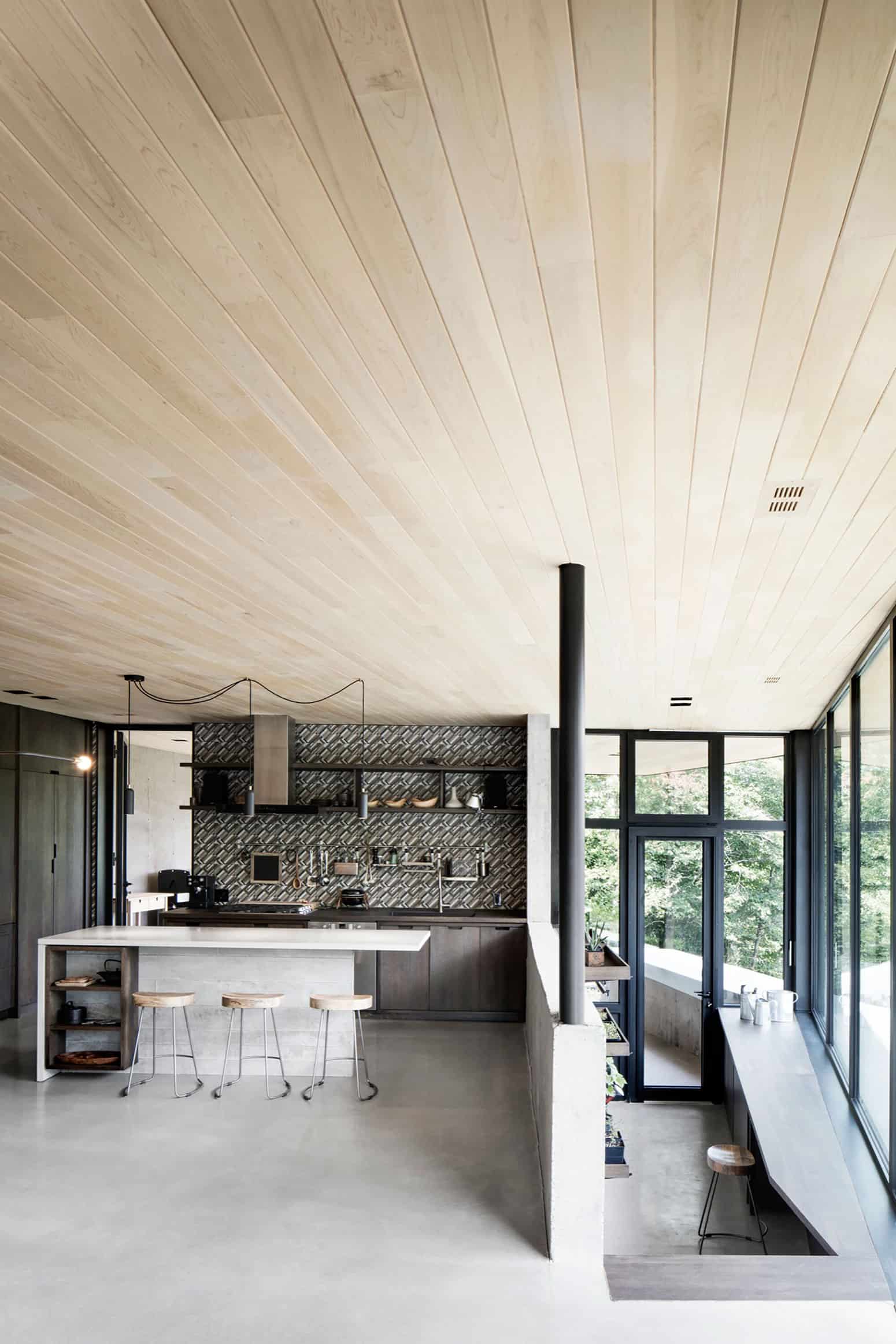 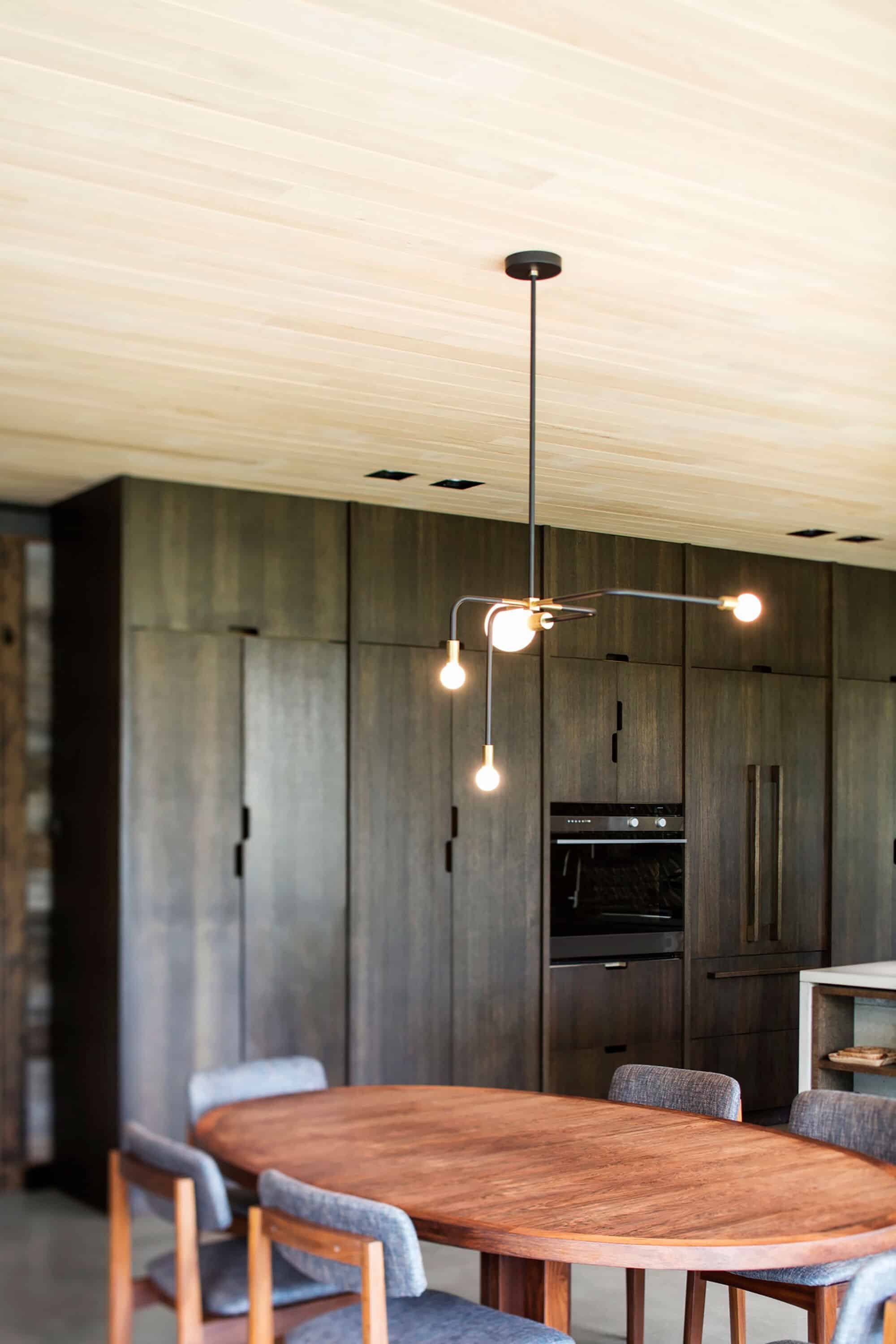 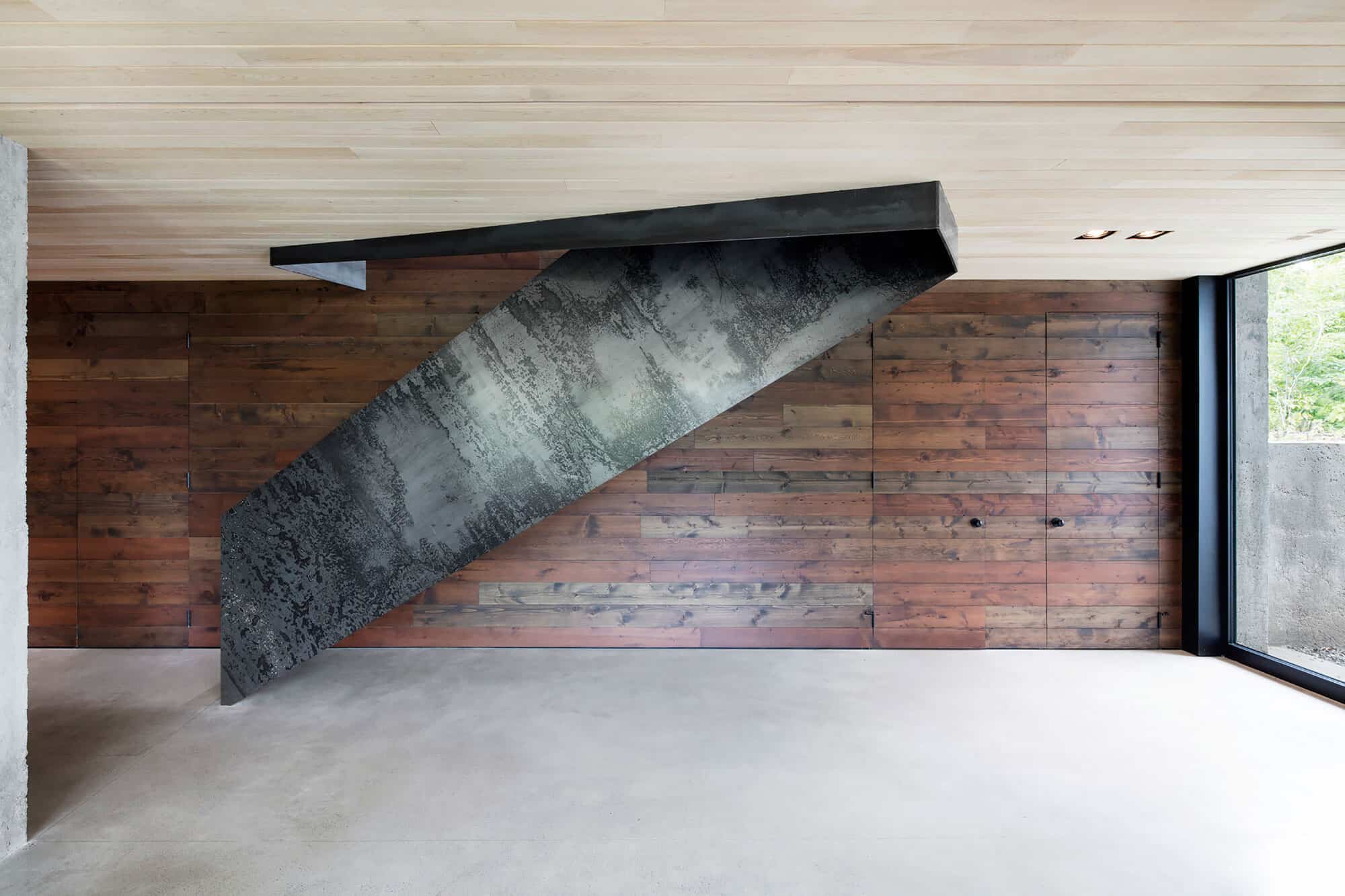 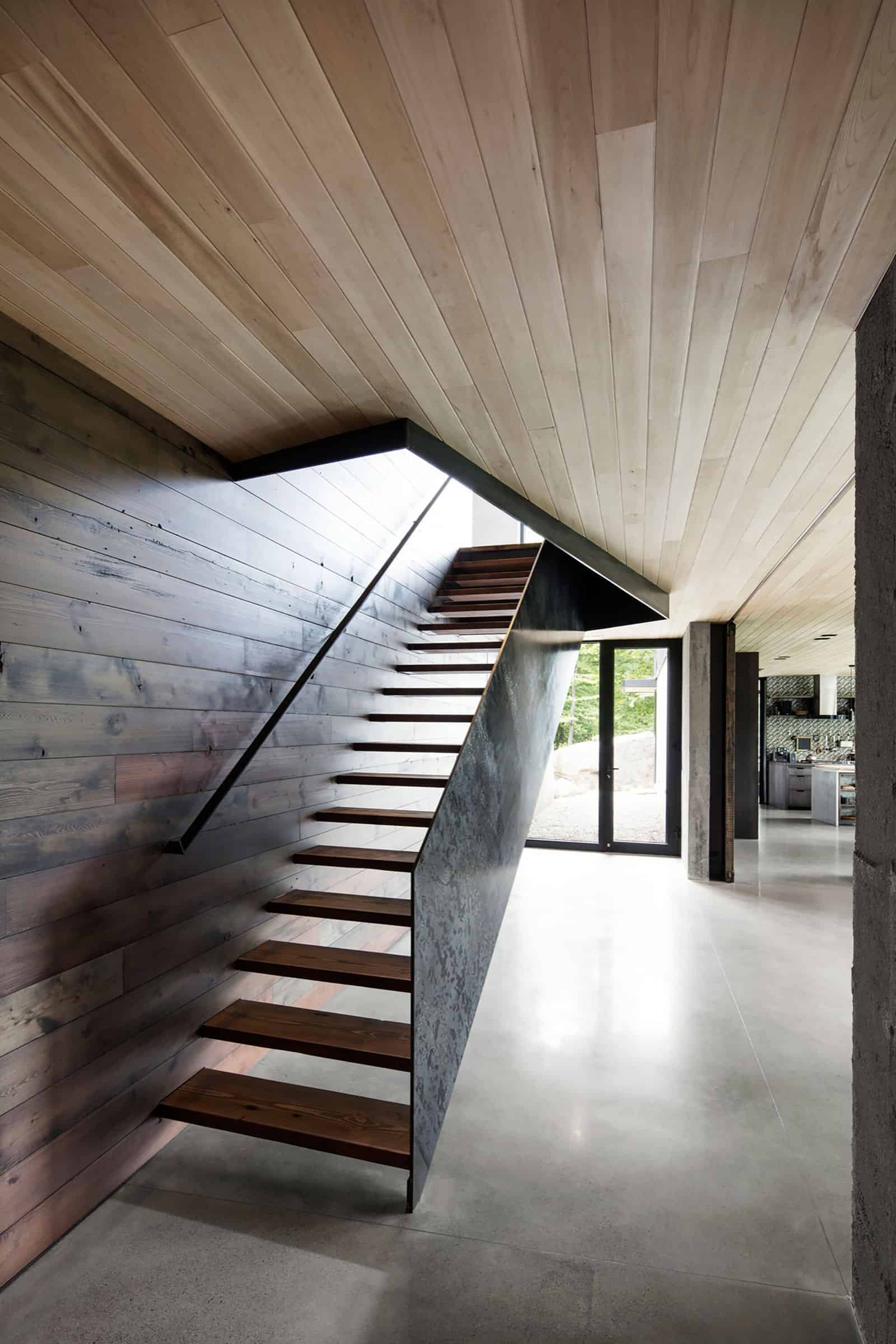 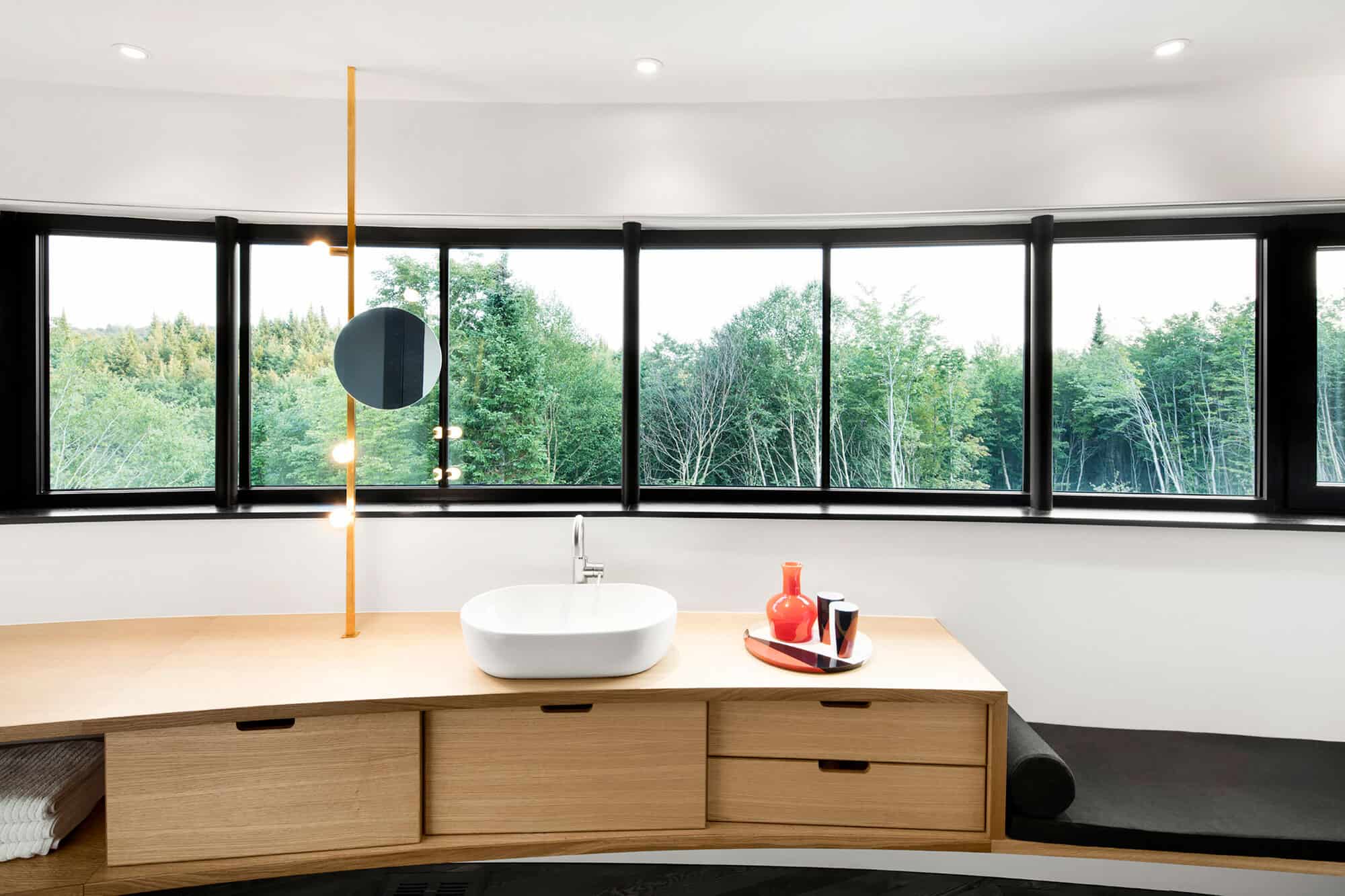 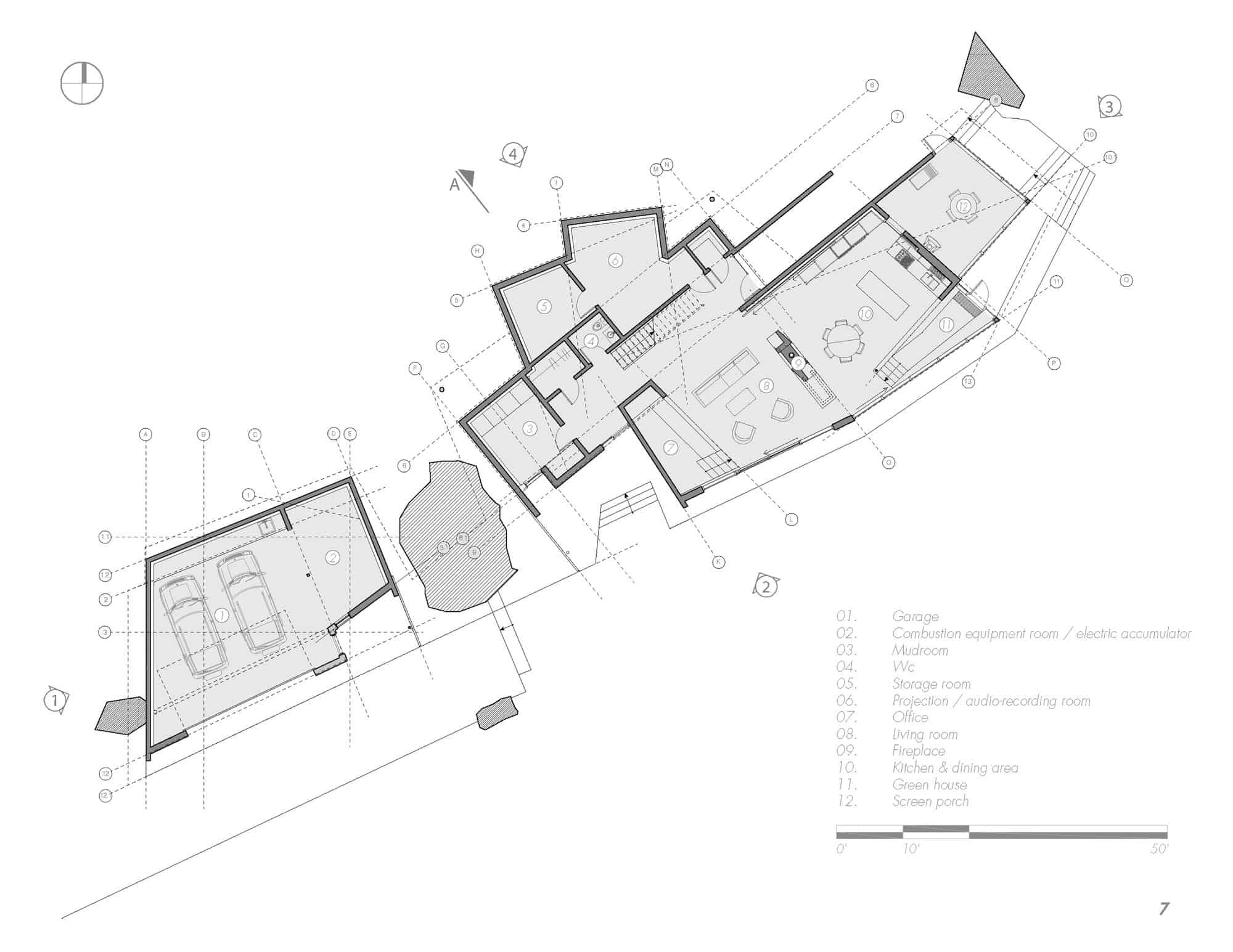 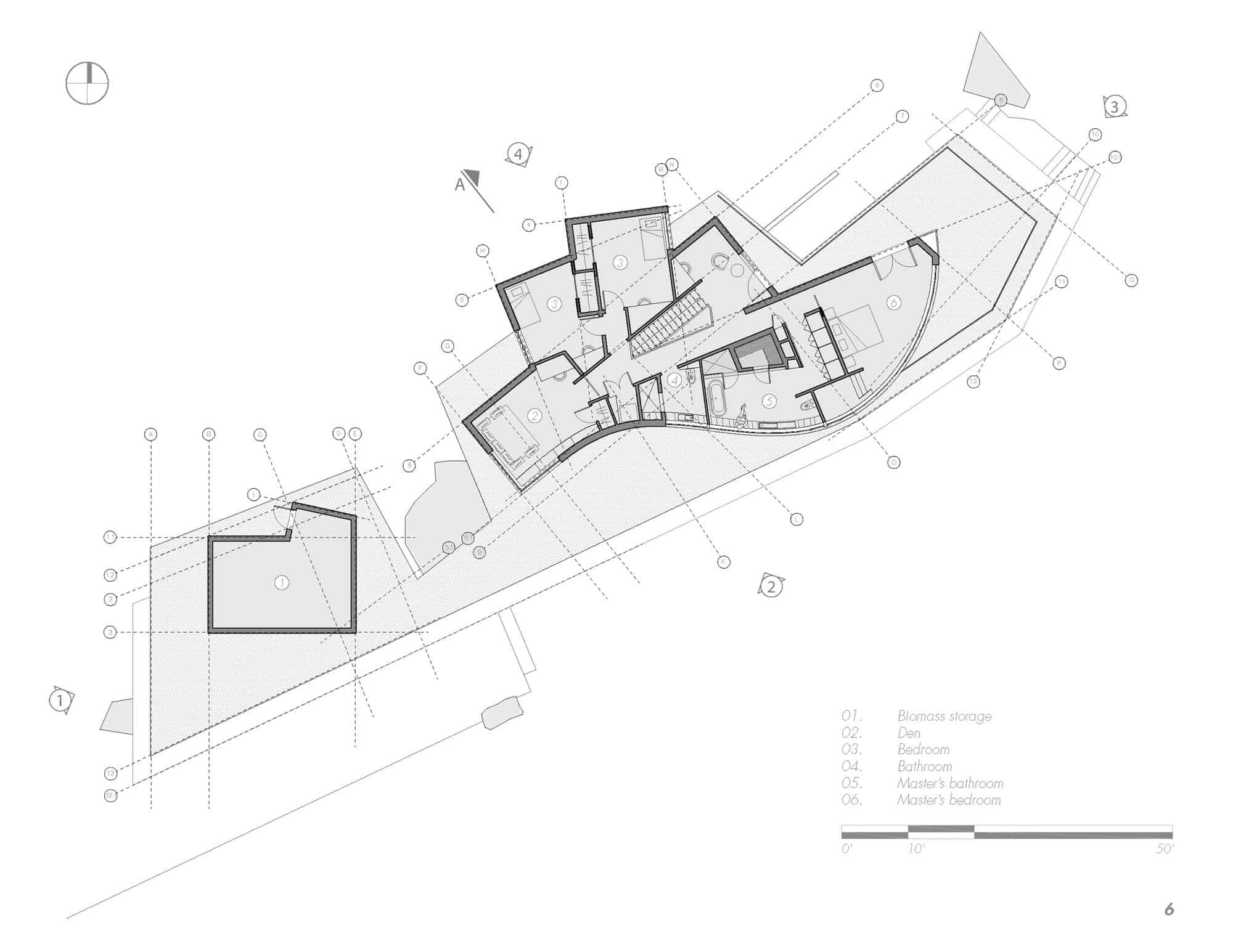 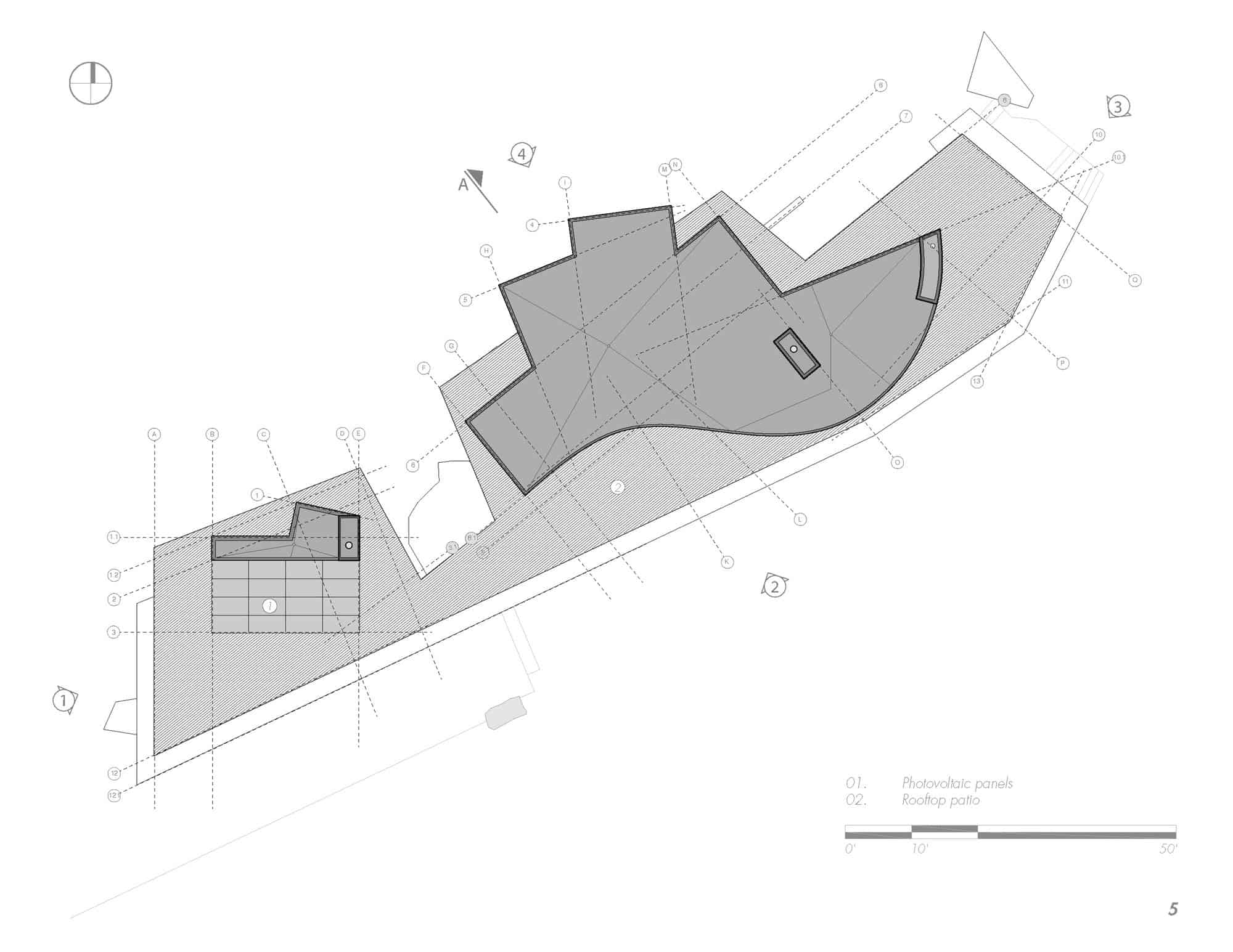 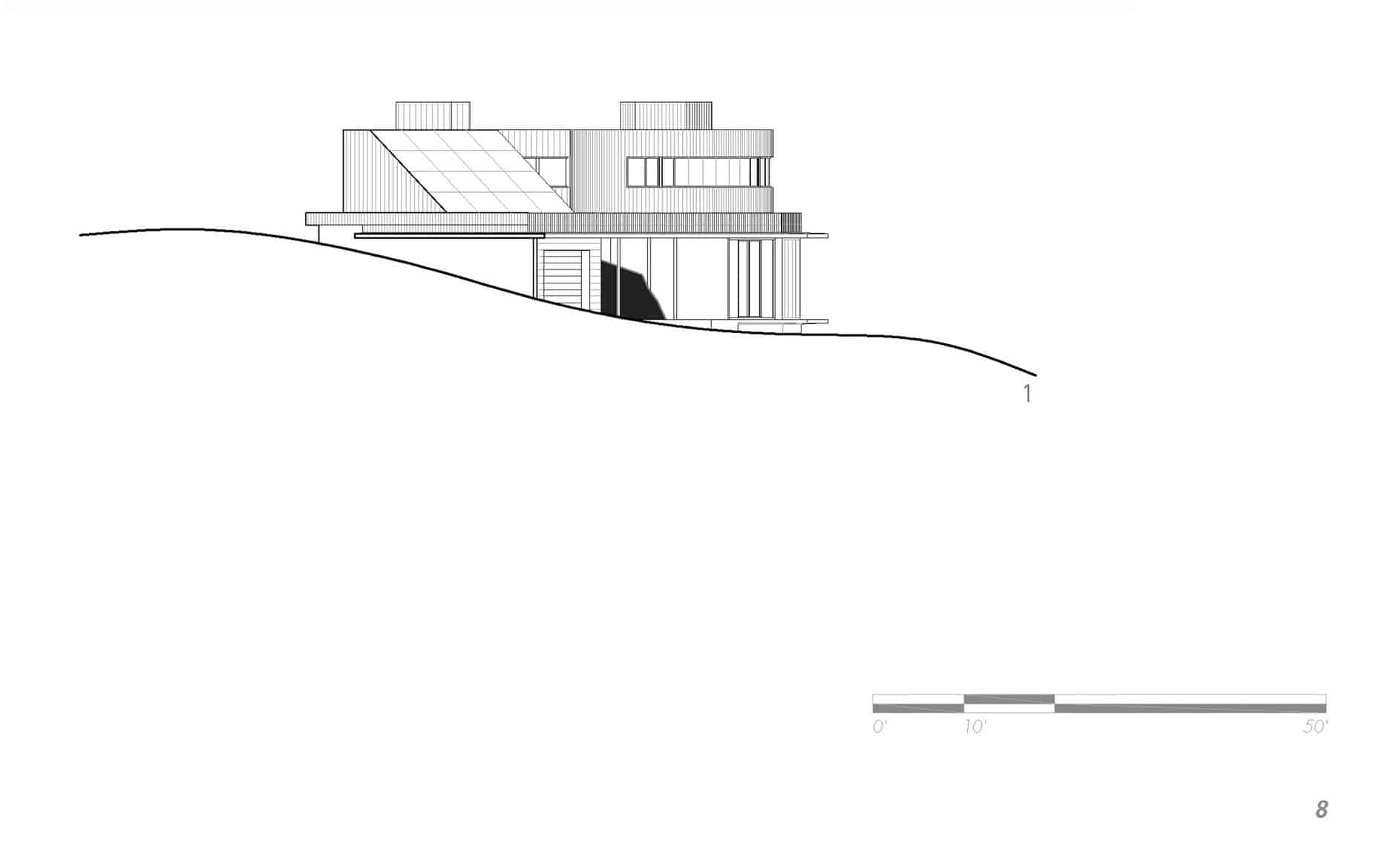 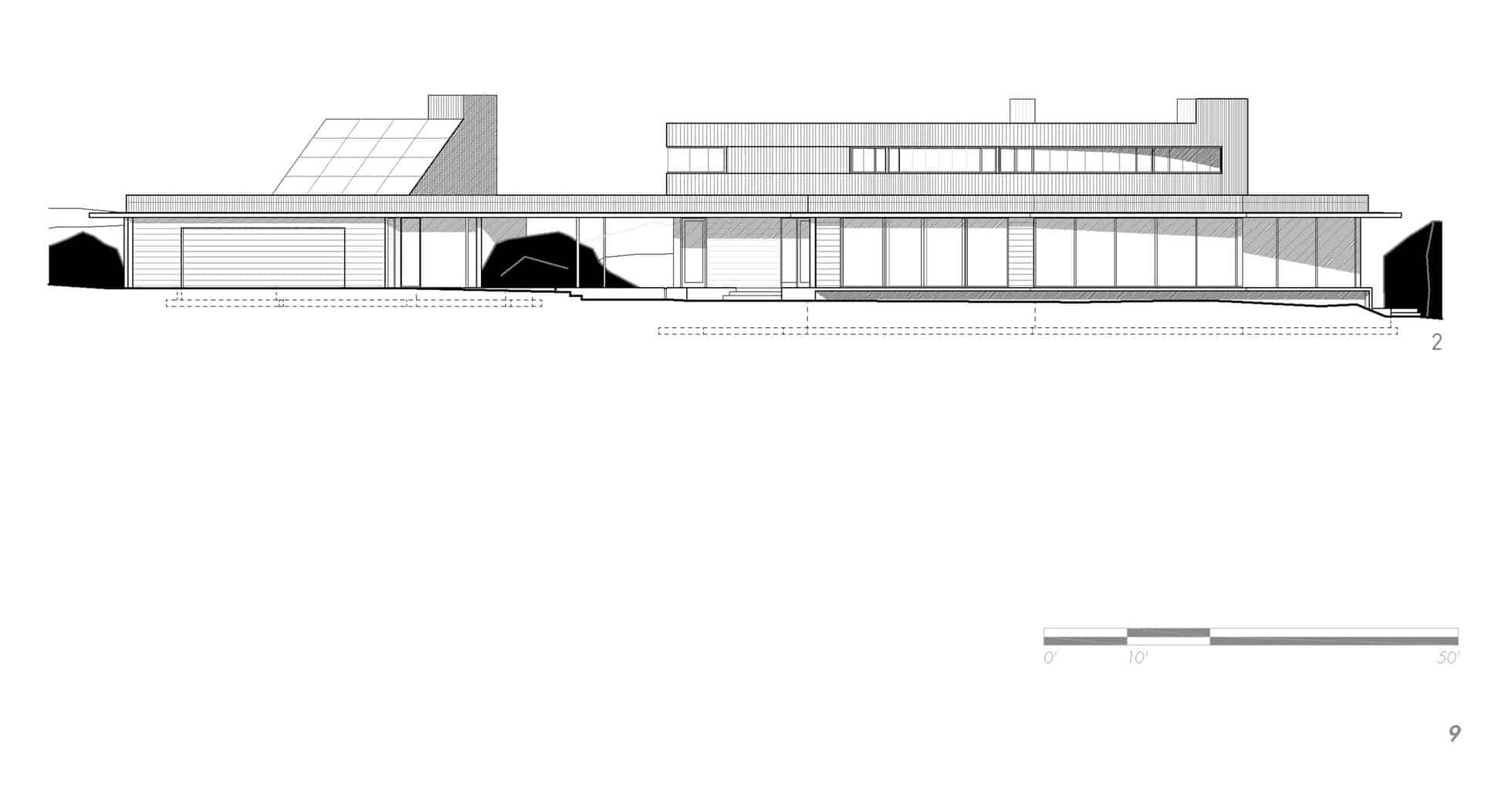 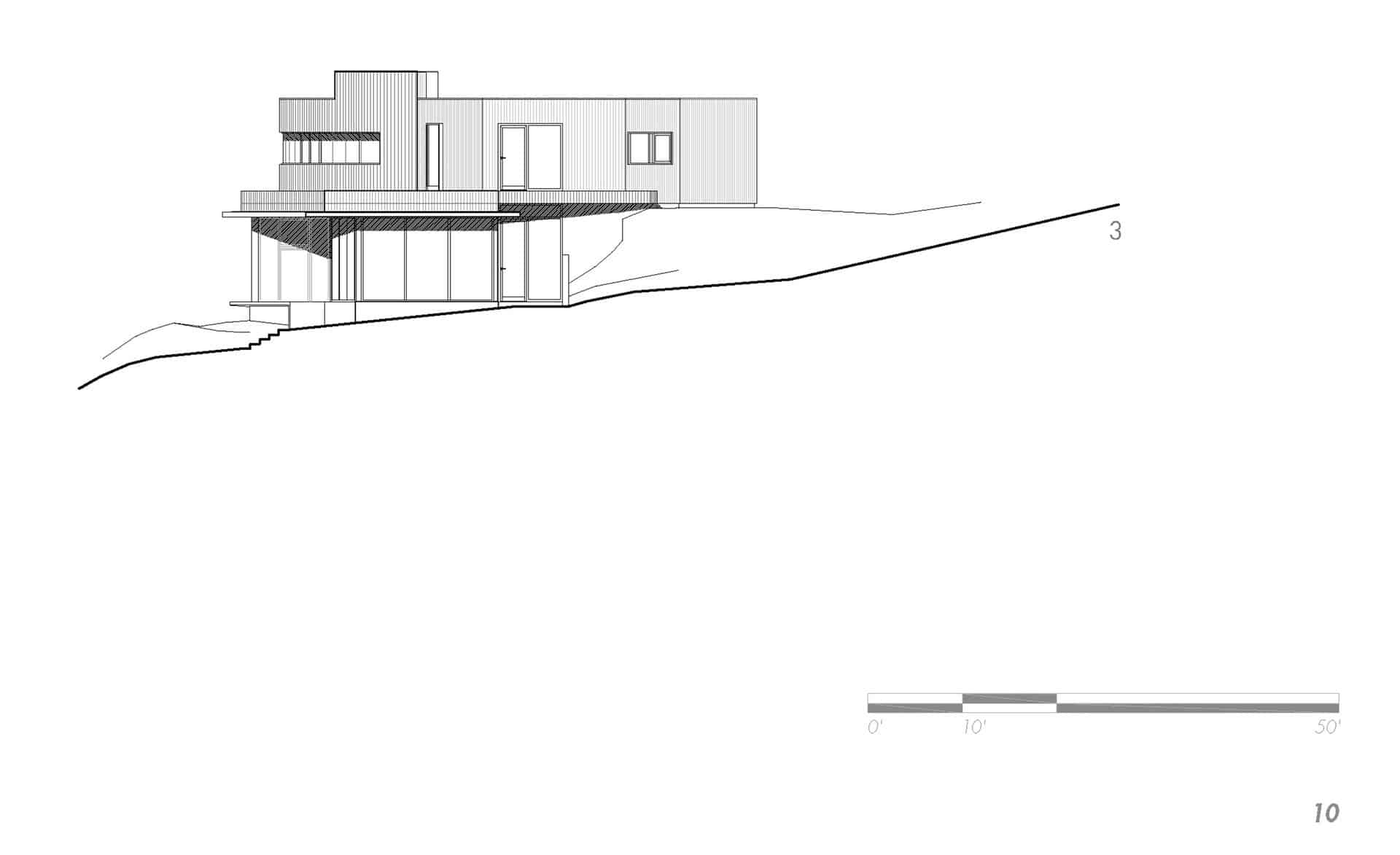 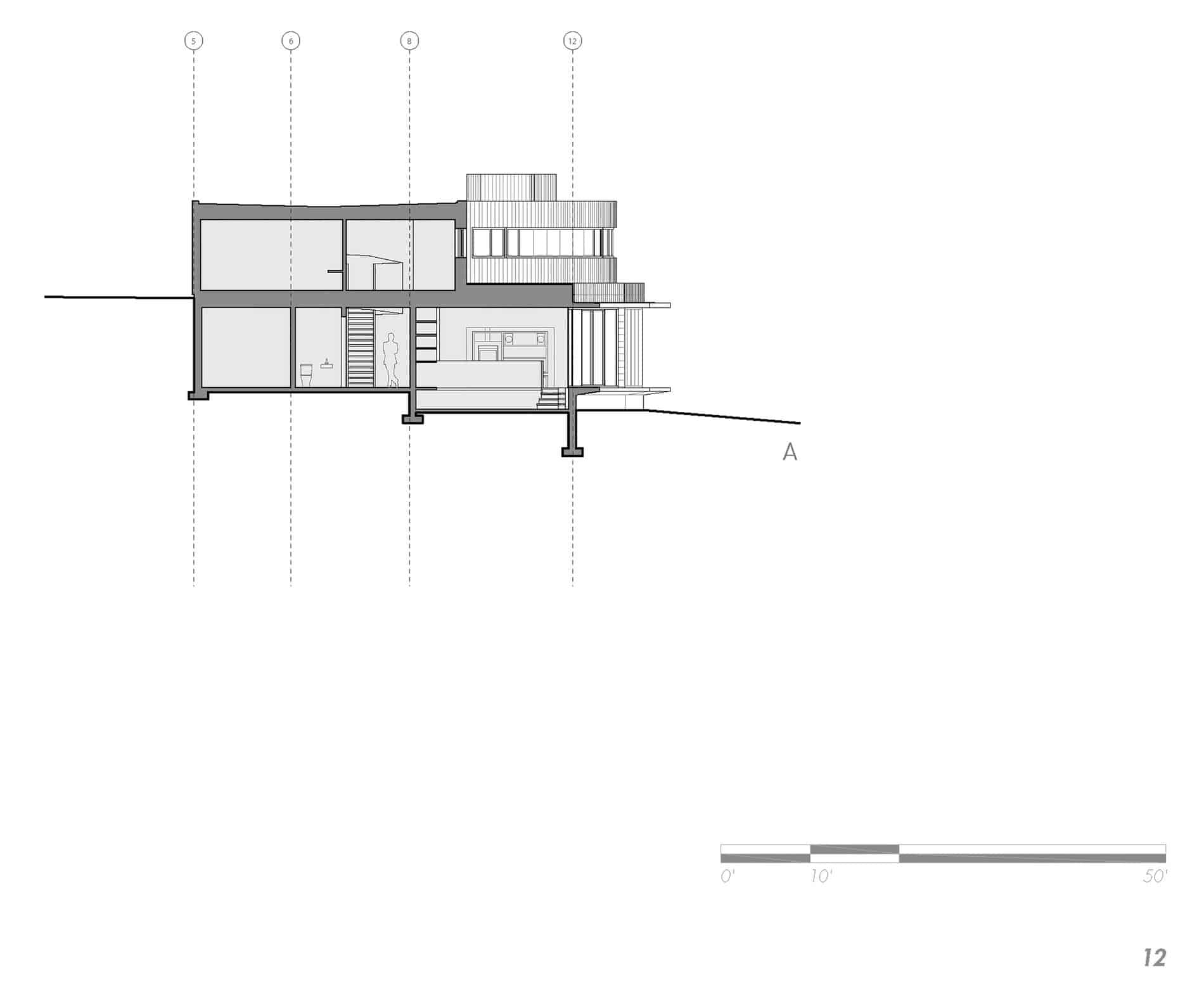 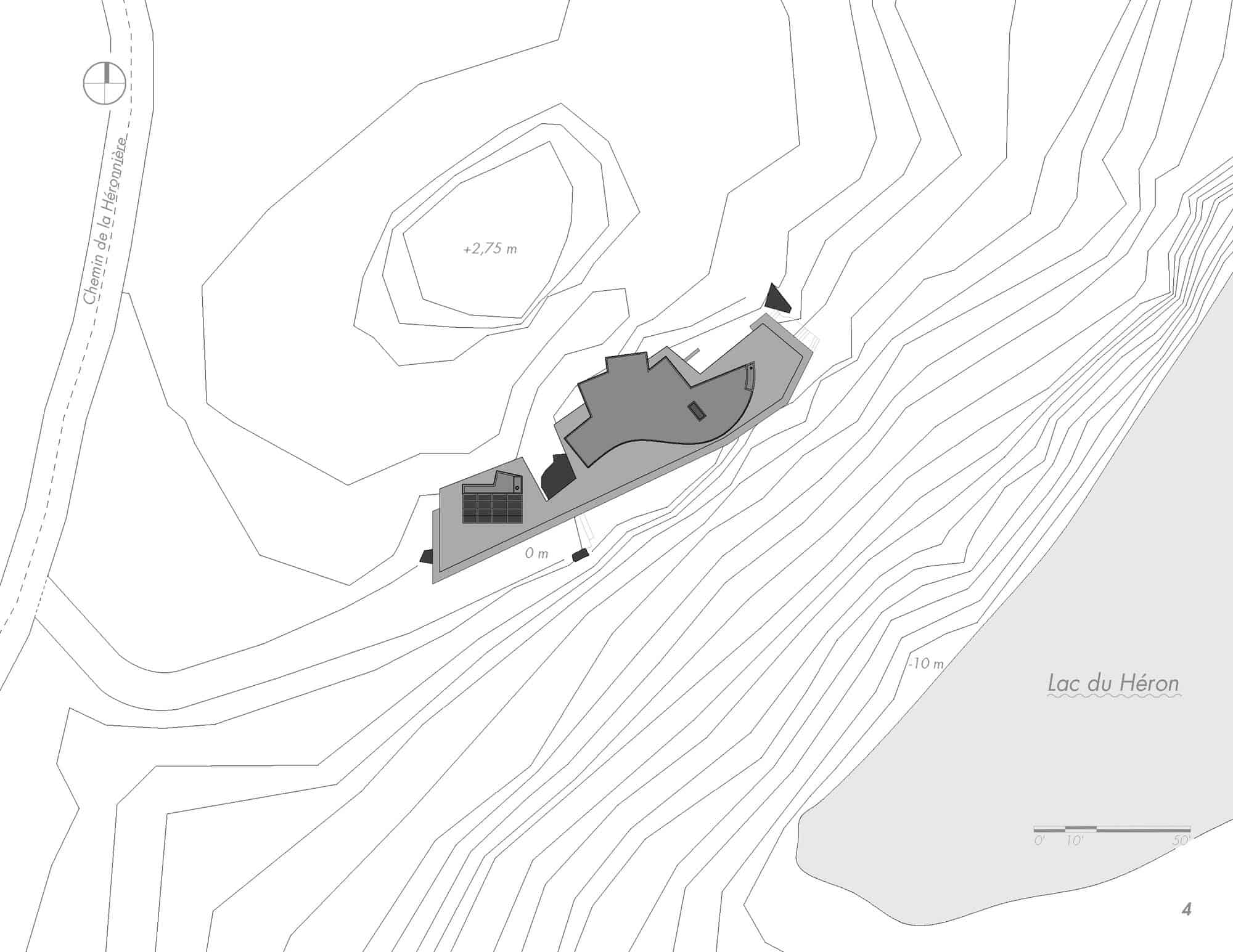 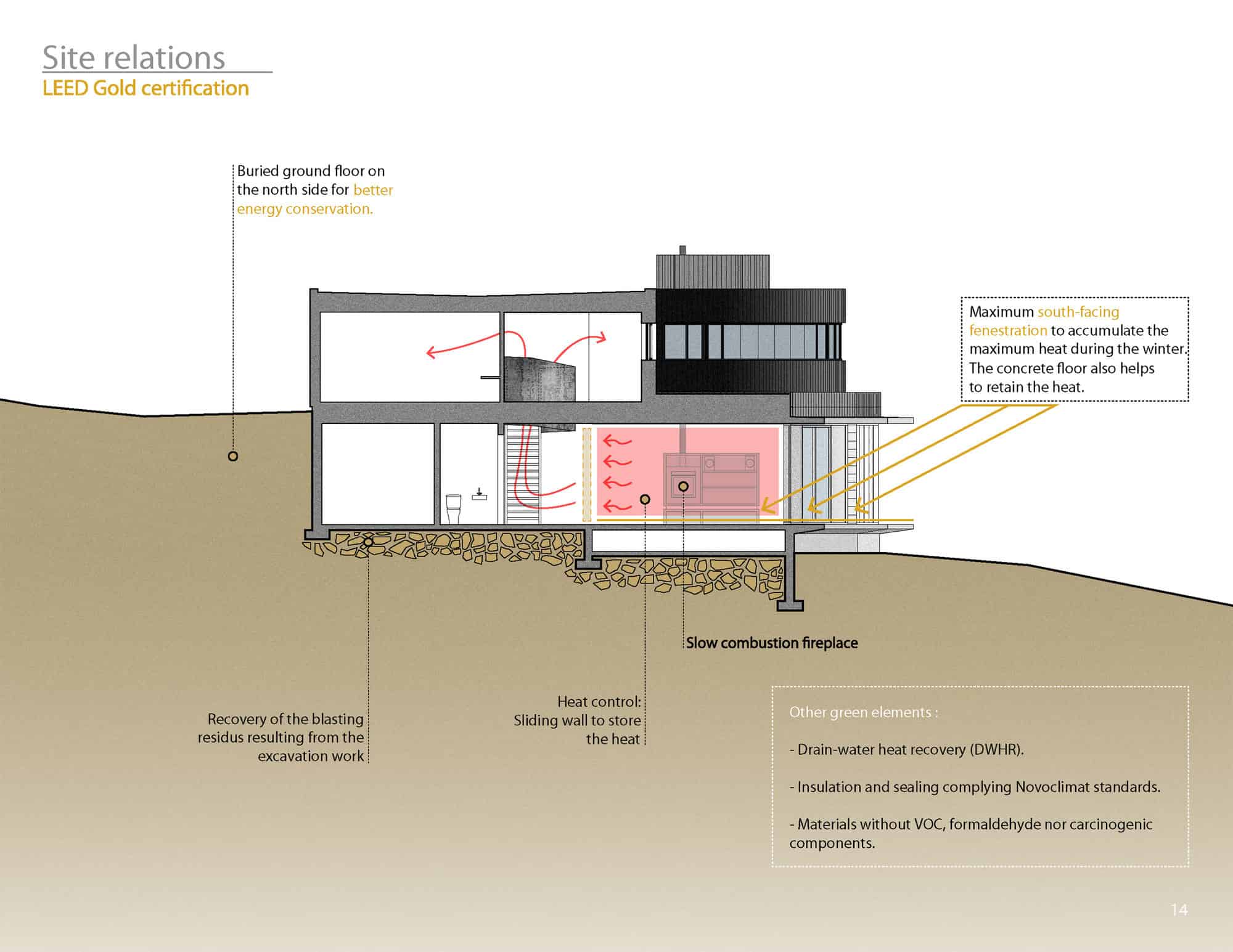 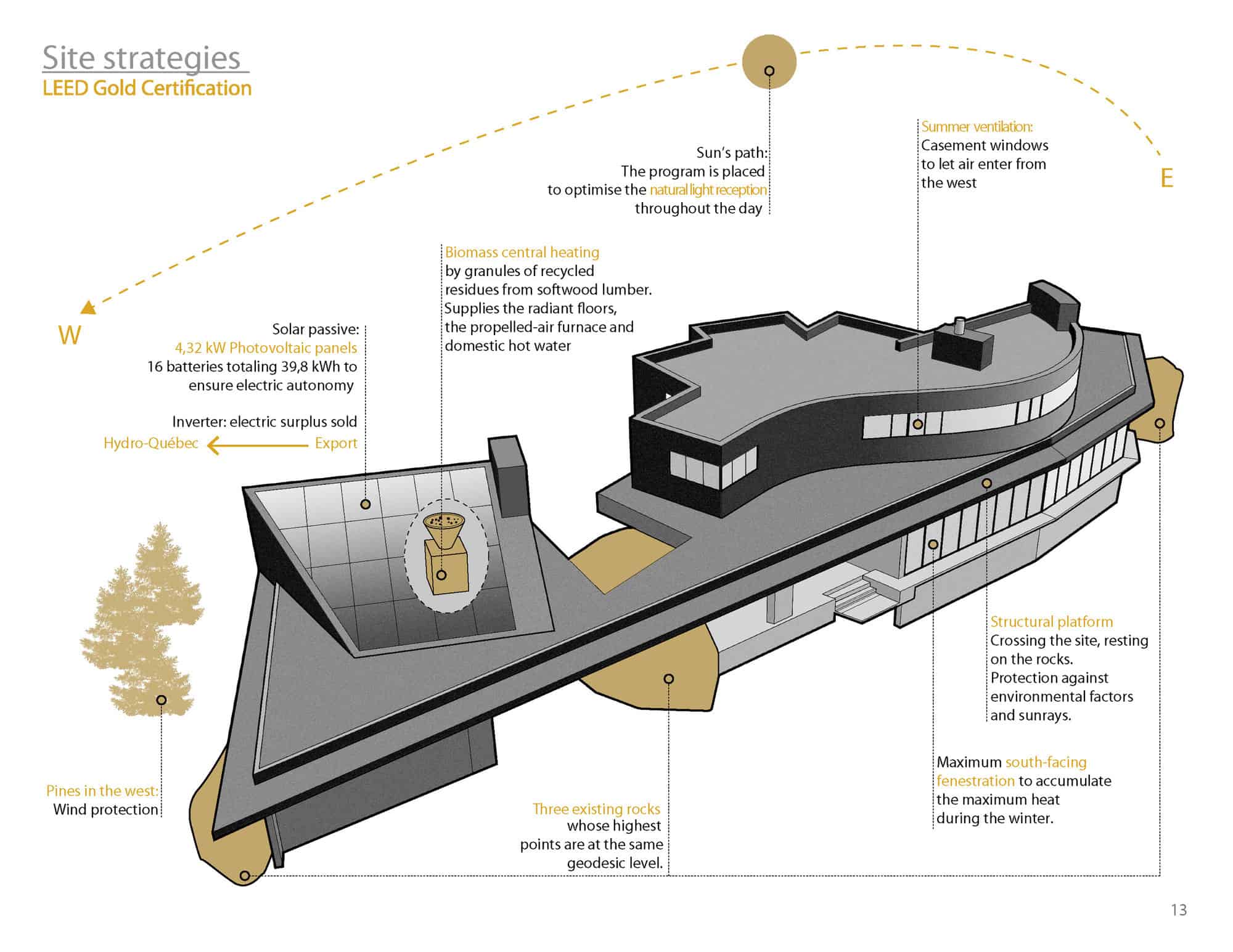 Completed in 2014, it is located in Wentworth, Quebec, Canada.

“La Héronnière’s conceptual approach proposes an interpretation of the notion of recycling.

We offer a reflection on the importance of maintaining a theoretical issue in our practice, which seems undermined by the public’s sole interest today in the technical dimension: “sustainable development”.

La Héronnière was designed according to an approach related to upcycling (which consists of reclaiming waste into an object of value by the artist’s poetic intervention. This current derives its origins, on the one hand, from the anti-establishment “attitudes” of Arte Povera, through Pop Art to the recent kitsch art of a Jeff Koons), recovering old conceptual references “recycled” into a new project vision, and on the other hand, by developing the project based on technical aspects related to recycling and renewable energy.

Four programmatic components define the framework of this exploration: Occupation, Supply, Reuse and Distinction, which obviously do not come from the “program” of the future occupants as such, but arise from the conceptual aspects of the project. This is a recurring approach in our work, in which the questioning of form and place precedes the programmatic issues.

The program was common: a young family with two children wanted to build a house representing their values, their desire to occupy a natural setting harmoniously and “symbiotically”, with the site perceived as “the host”. Environmental requirements were non-negotiable: no magnetic field in the inhabited space, no wireless communication protocol, energy self-sufficiency, materials free of volatile organic compounds, recovery of project residues, electric car, etc.

Faced with all these good intentions and technical requirements, characteristic of the values of Generation Y, we introduced just one more, which seemed to take precedence over these new media-promoter values: the value of the place, the existential quality related to the environment. In contrast to the idea of performance quality, we promoted the conceptual and perceptual value of the architectural project, as a real counterpoint to the current concept of sustainable development.

The place of intervention, but especially the way its intrinsic structures were transformed, was therefore the meeting point of these two antagonistic visions of land use planning. The land presented a steep slope, a sort of diagonal plane, not conducive to residential appropriation. In response to the spatial quality generated by this diagonal, we installed a horizontal plane in the landscape, generated from three mysteriously identical geodesic points, located at the top of three boulders present on the site.

From that time on, the project was designed on a simple hierarchical principle of occupation: being above or below this horizon line… Below are living spaces with mineral ambiences and above are sleeping areas with lighter materials.

Below this horizontal plane, it was decided to reorganize the site in order to architecture a plateau that would become the outdoor living plane. The blasting residues were compacted and refused on the site to create the project’s new ground: a disturbed surface rather than one extracted from the territory. A sort of “palliative treatment” of the violence done to the site during the act of excavation.

The subsequent stage positions the bearing walls of the horizontal plane linking the three existing rocks (Fig. 15). This plane is oversized relative to the residence’s perimeter to create outdoor areas protected from bad weather and from solar radiation in summer. The concrete used for construction of the bearing walls is conjoined with the rocks, retaining a mineral quality on the lower level of the residence.

The walls are positioned perpendicular to the axis of deployment of the spaces, but especially relative to the path of the sun, in order to capture its energy during certain hours and store it to save on heating. The ground is also concrete and plays the same role of passive component producing a heat and mass transfer at the end of the day.

The family was concerned about introducing a notion of “action” into the residence’s program. Meal preparation became one of the rare “at home” activities, bringing movement and sociability.

To the development of the eating space at the heart of the project, we adjoined a small greenhouse, in continuity with the big bay window on the southwest side, for conservation of seeds from outdoor crops during the fall to prepare for sowing during the winter. Some aromatic plants are also kept in the greenhouse all year round, with a drainage system developed to facilitate growing and maintenance.

During the summer, the site’s residual slope, facing due south, becomes the growing place that offers ideal drainage qualities. This “market garden” vocation of the residence therefore offers a self-sufficient, active living model, far from the lazy afternoons of the Baby Boomer generation.

On a parallel track, the residence “supplies itself” with recycled energy. The missed energy system, of some complexity, is designed to ensure the home operates in almost total self-sufficiency in terms of hydroelectric energy. Mainly fueled by biomass, it also derives its energy from a system of photovoltaic panels. In fine summer weather, the system offers an energy surplus that will be rerouted to the region’s power distribution grid and accounted for in winter consumption credits.

Ultimately, the home should achieve a zero consumption ratio when the economic agreements will be applied with the local distribution grid.

For La Héronnière, we collaborated closely with the future occupants to architecture the spaces based on old or recovered construction objects, etc. This approach, in which the object appears at the same time as the project is designed, invites research outside the professional context.

To recycle the wood doors of a former garage, a removable fence was set up, separating the main living area from the ground floor, heated mainly with a slow-burning fireplace. This allows better preservation of heat on the ground floor during cold winter evenings, preventing heat from rising to the upper floor through the stairwell on the ground floor.

As can be understood from the project’s statement of intent, this involved a shift of the usual interests: not a stereotyped setting of the “ideal home” displaying wealth and power, but an act of ideological demonstration through a specific occupation of the site. Is this a sign of a change of attitude or the ultimate sign of advanced capitalism?

However, the result of this conceptual approach turned out to be unique, even distinctive: We recognized the importance of the new ecological principles of a certain segment of the population, and the new social values related to these principles, which provide leverage and reflect the occupant’s desire for architectural distinction.”