A Bioclimatic House is a private residence renovated by Patrice Bideau Architecte.

It is located in Port of Saint Goustan, France. 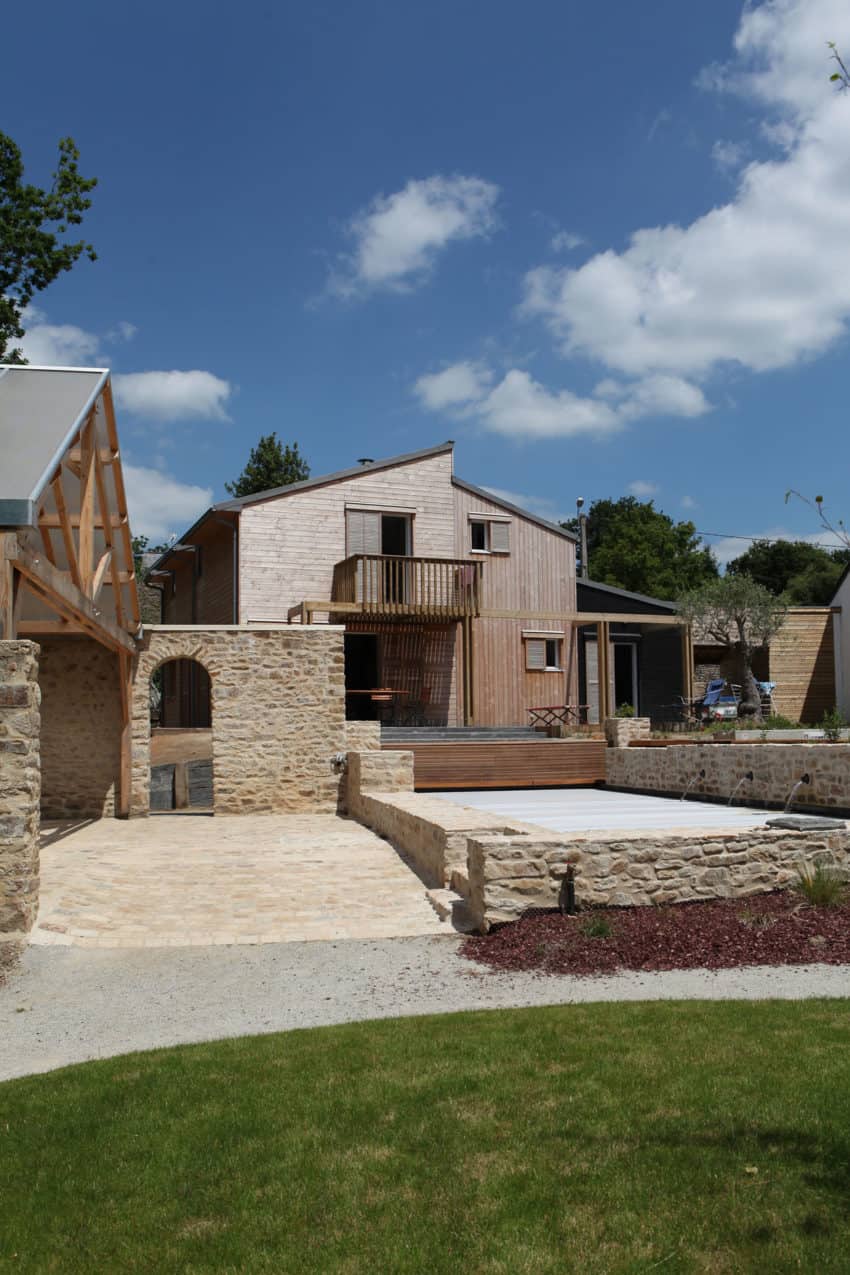 “In 2010, the plan started out as a house renovation. However, when it was discovered that the state of the existing dwelling rendered this impossible, demolition and reconstruction became the point of departure for a new project. The building plot is situated in a conservation area made up of medieval townhouses and various other period buildings overlooking the historic port of Saint Goustan where a famous historical figure, Benjamin Franklin, landed in 1776.

The owners chose to build an ecological, passive house which would respect both Feng Shui principles and local town planning regulations. The advice of the architect was to comply with upcoming energy consumption regulations and to build according to organic architectural precepts as laid out by Frank LLOYD WRIGHT in 1939 : “Nor cherishing any preconceived form fixing upon us either past, present or future but instead exalting the simple laws of common sense or of super sense if you prefer, determining form by way of the nature of materials.”

It was therefore decided to construct a mixed concrete and wood frame, low energy consumption dwelling with the aim of attaining an annual performance of 35 kWhep/m². The north wall is built of concrete insulated with 120mm rock wool with Douglas Fir cladding on the exterior and traditional plaster on the interior. The concrete supporting wall increases thermal mass as do the insulated concrete slab and the plaster tile partition walls on the ground floor. The wood frame built of 145/45mm uprights is insulated with cellulose wadding and covered with a vapour barrier. The first storey floor is composed of 8/20mm joists, OSB panels, gypsum and cellulose insulation and overlaid with linoleum. The shallow pitched, standing seam zinc roof is lined with 300mm rock wool insulation, a vapour barrier and plasterboard. These passive elements store heat in winter and keep the house cool in summer. This cooling effect is accentuated by the pergola and balcony designed to support a climbing plant and slatted, sliding, shutters.

The main façade, which is south facing, overlooks a natural pond filtered by aquatic plants. The outhouses have been renovated and the large porch over the courtyard is clad in polycarbonate panels which lighten the overall look of the ensemble. The long, steeply sloping, landscaped grounds incorporate vistas which look south from the carport which closes off the courtyard to the rear and create a link between the house and the outbuildings. The section of black cladding on the south wall is designed to draw the eye towards the garden.

The project manager, considering that the house was sufficiently well insulated to draw maximum benefit from solar heat, decided to abandon the heat pump in favour of a wood-burning stove and heat transfer fluid-filled radiators. The house is equipped with a thermodynamic water heater and a single airflow hyrgo B ventilation system. The elimination of the heat pump and the juxtaposition of all these components resulted in an energy performance of 67 kWhep/m² per year and 2 blower-door tests produced results of 0.36m3/h.m².

Special care was taken over the interior design : the stove is backed with unfired earth bricks, the kitchen and drawing room floors are of Burgundy stone and lime-based paint was used on the walls.

The combined application of high energy performance, organic and bioclimatic architecture in a single project has brought into being a house which draws inspiration not from regional tradition but from a tradition founded in nature, a natural habitat for man.”

HomeDSGN has received this project from our WeTransfer channel. Architects and interior designers are welcome to submit their work for publication.

Organic and Bioclimatic House in Brittany by Patrice Bideau