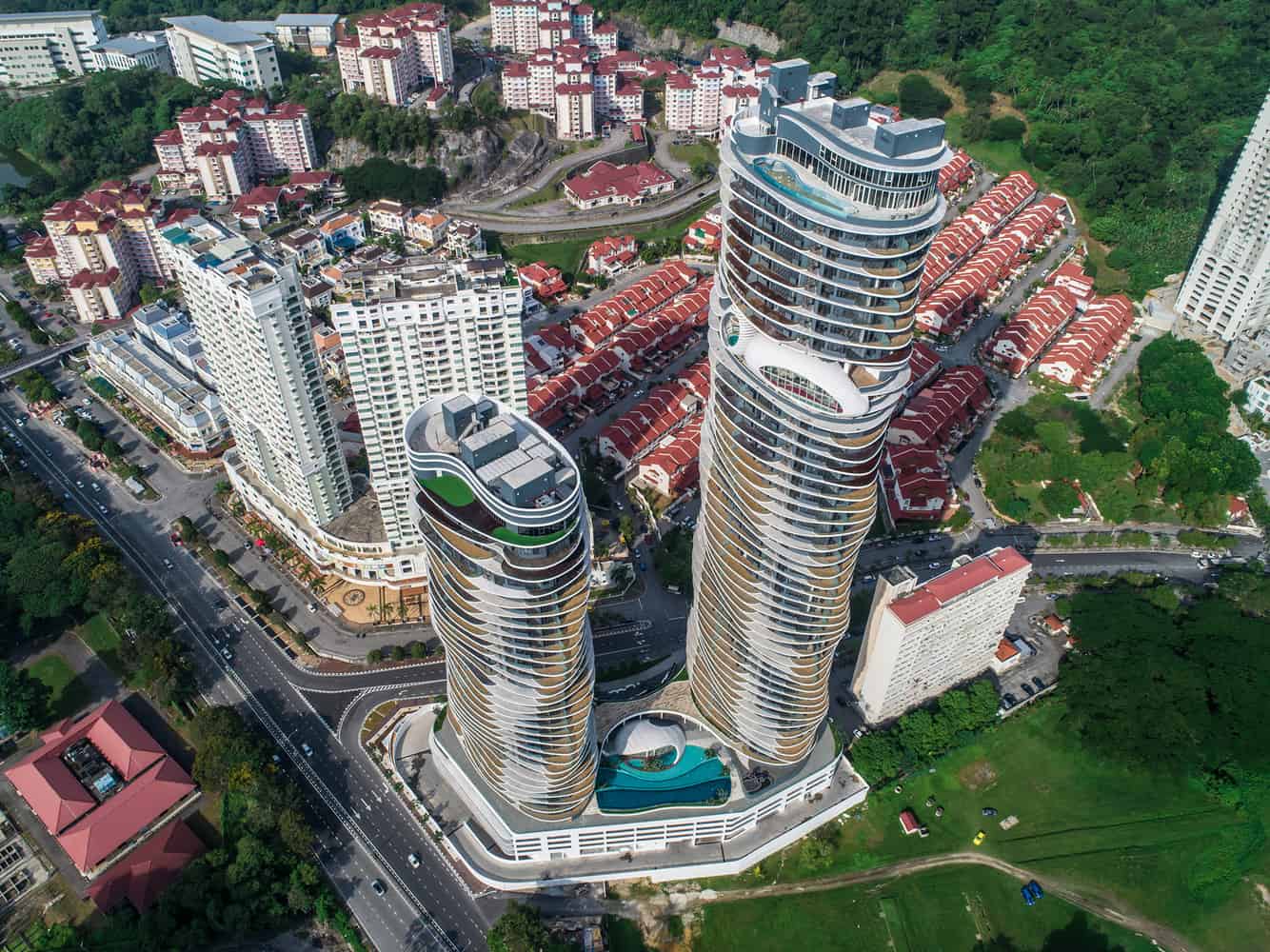 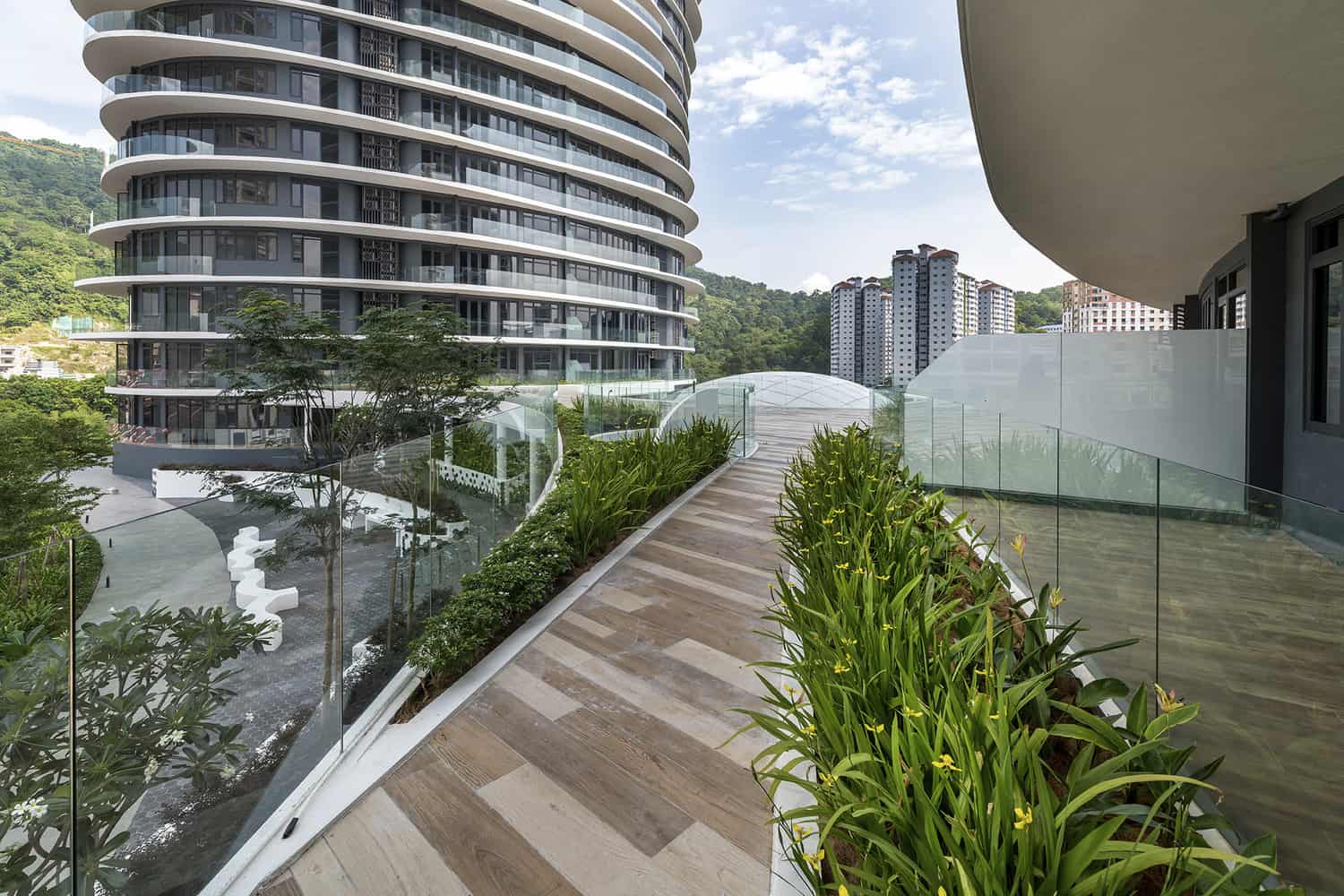 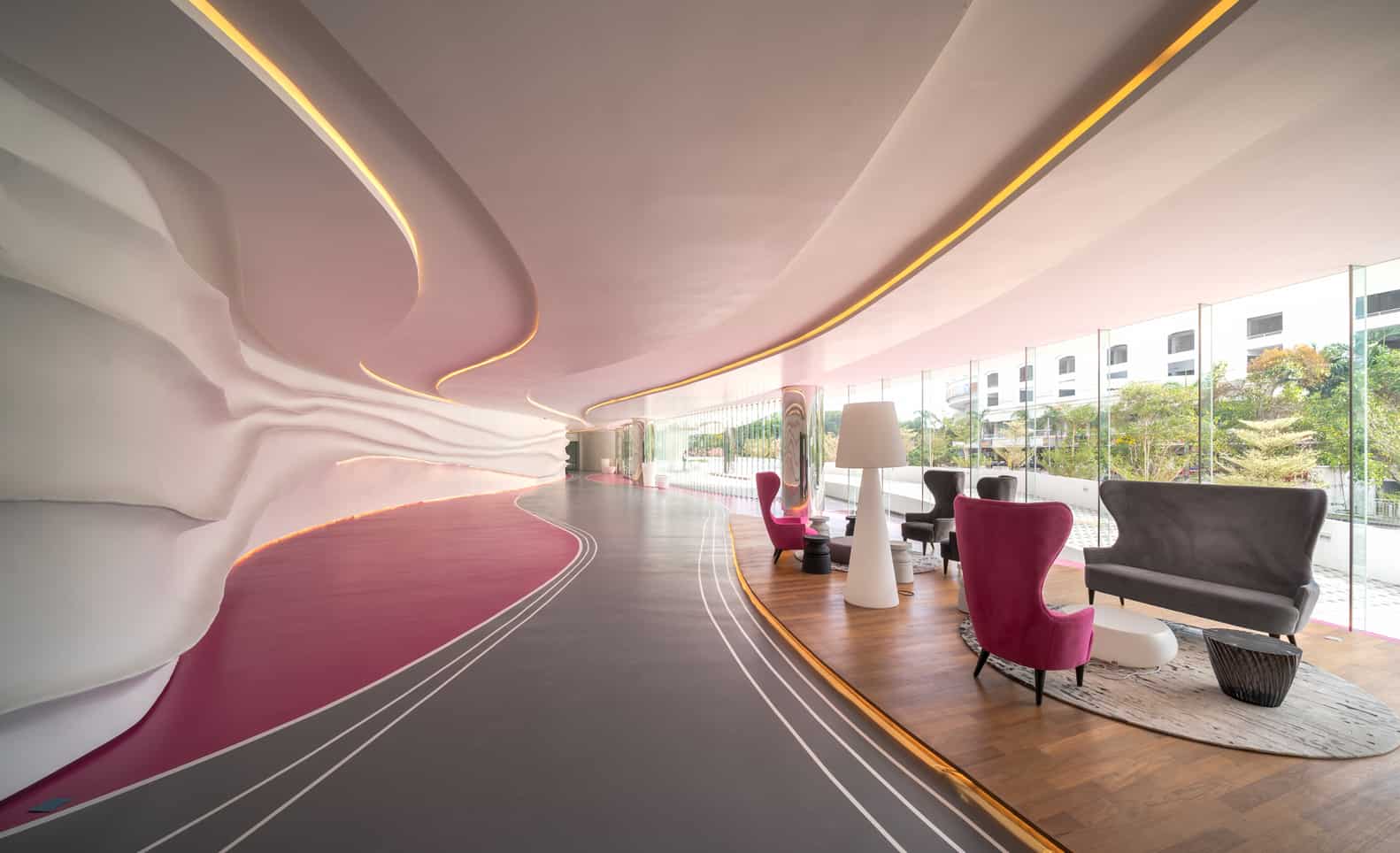 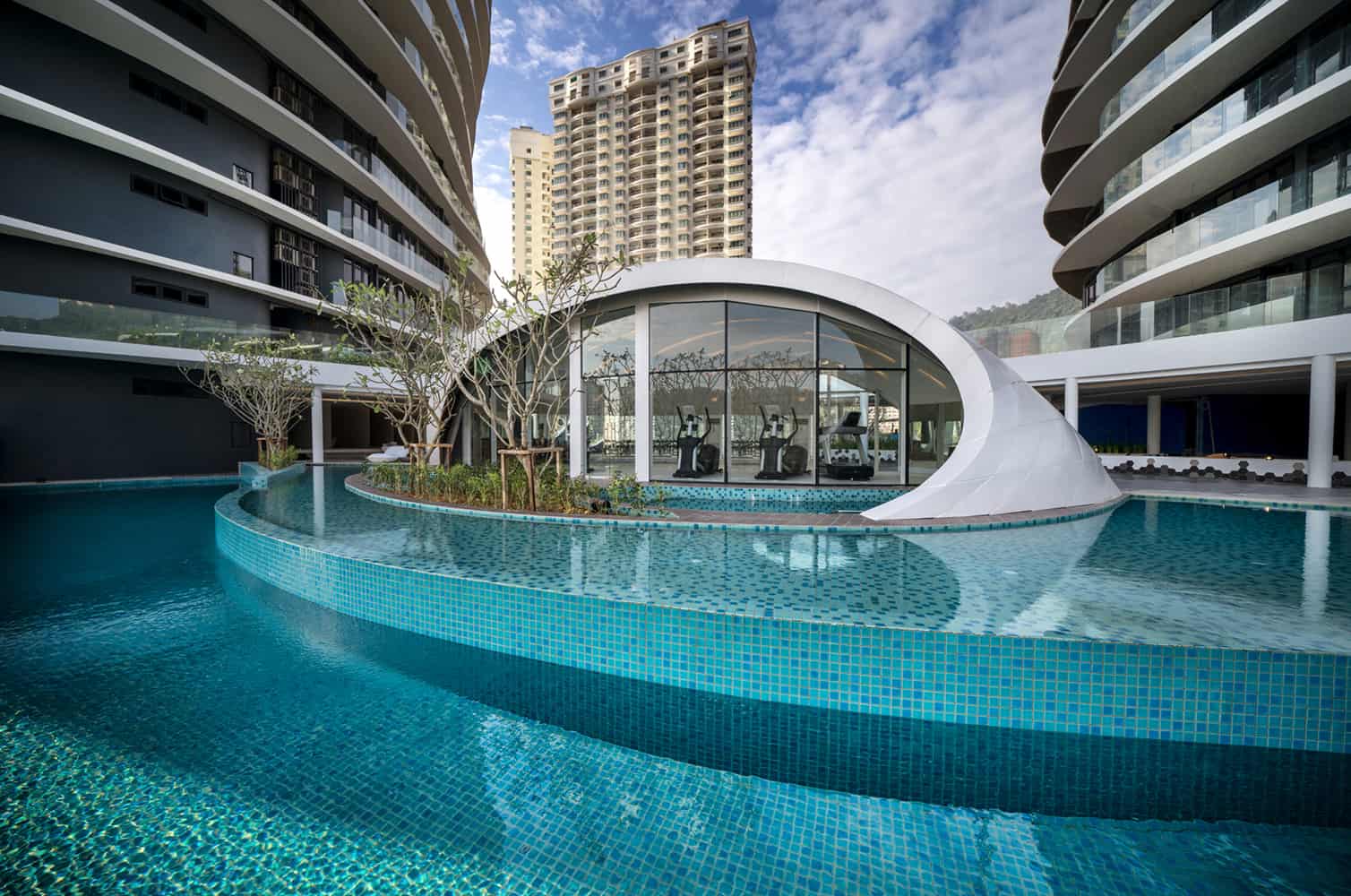 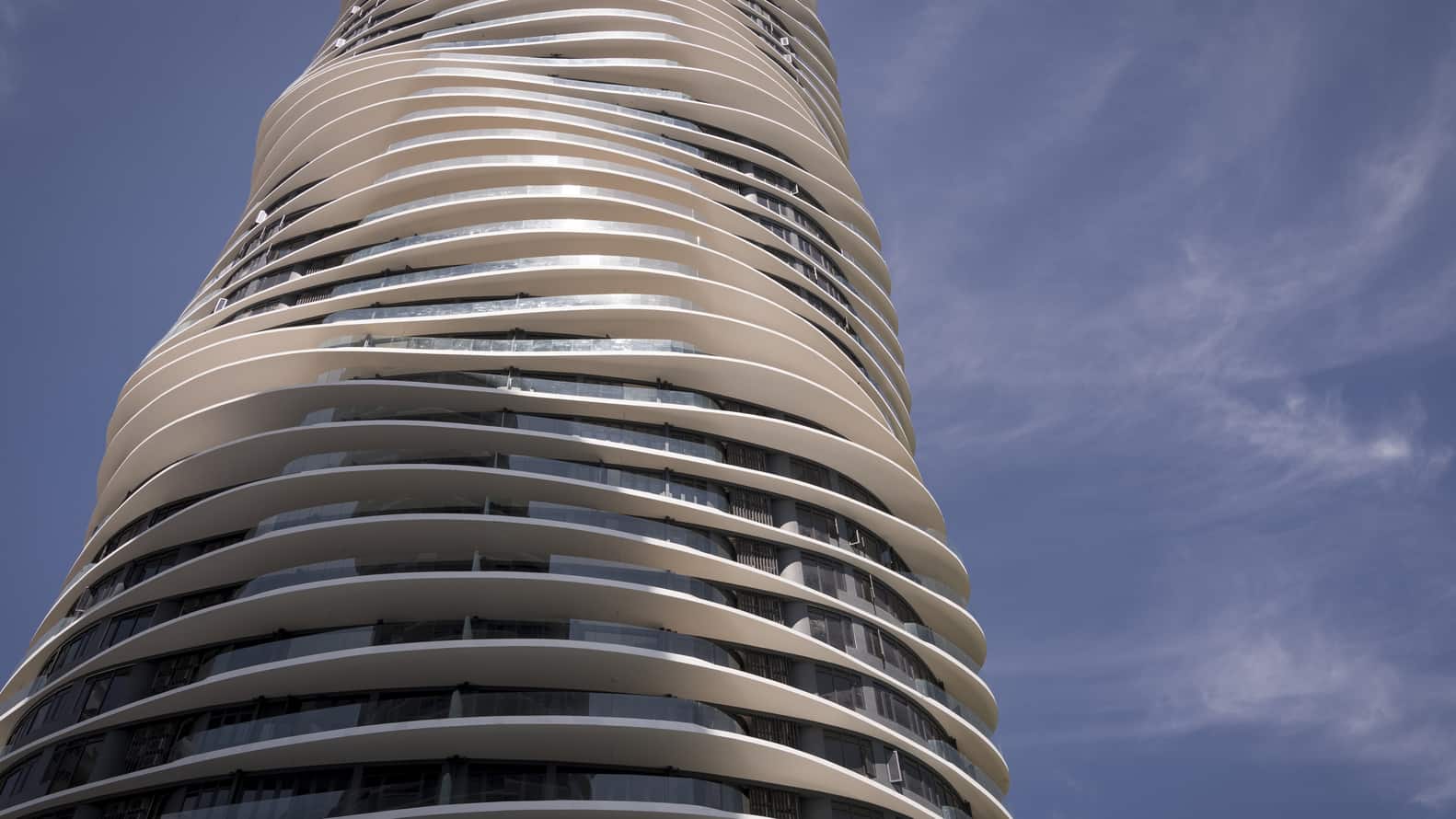 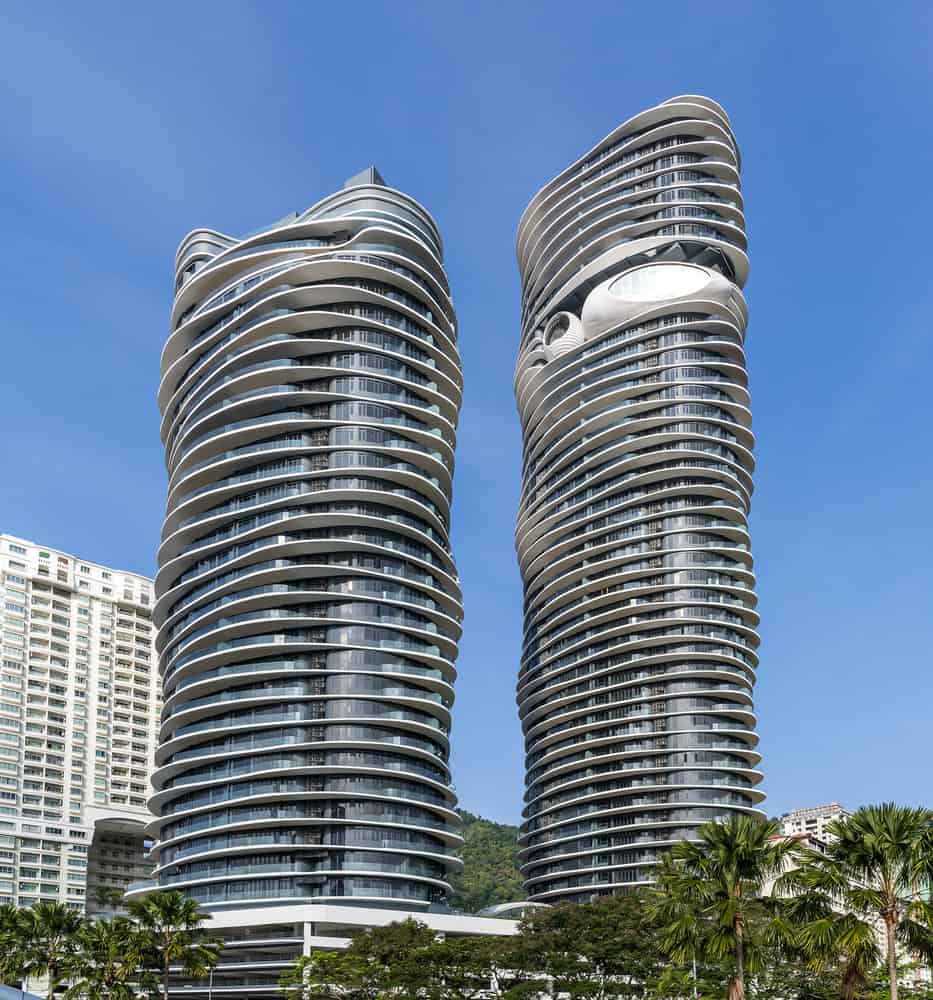 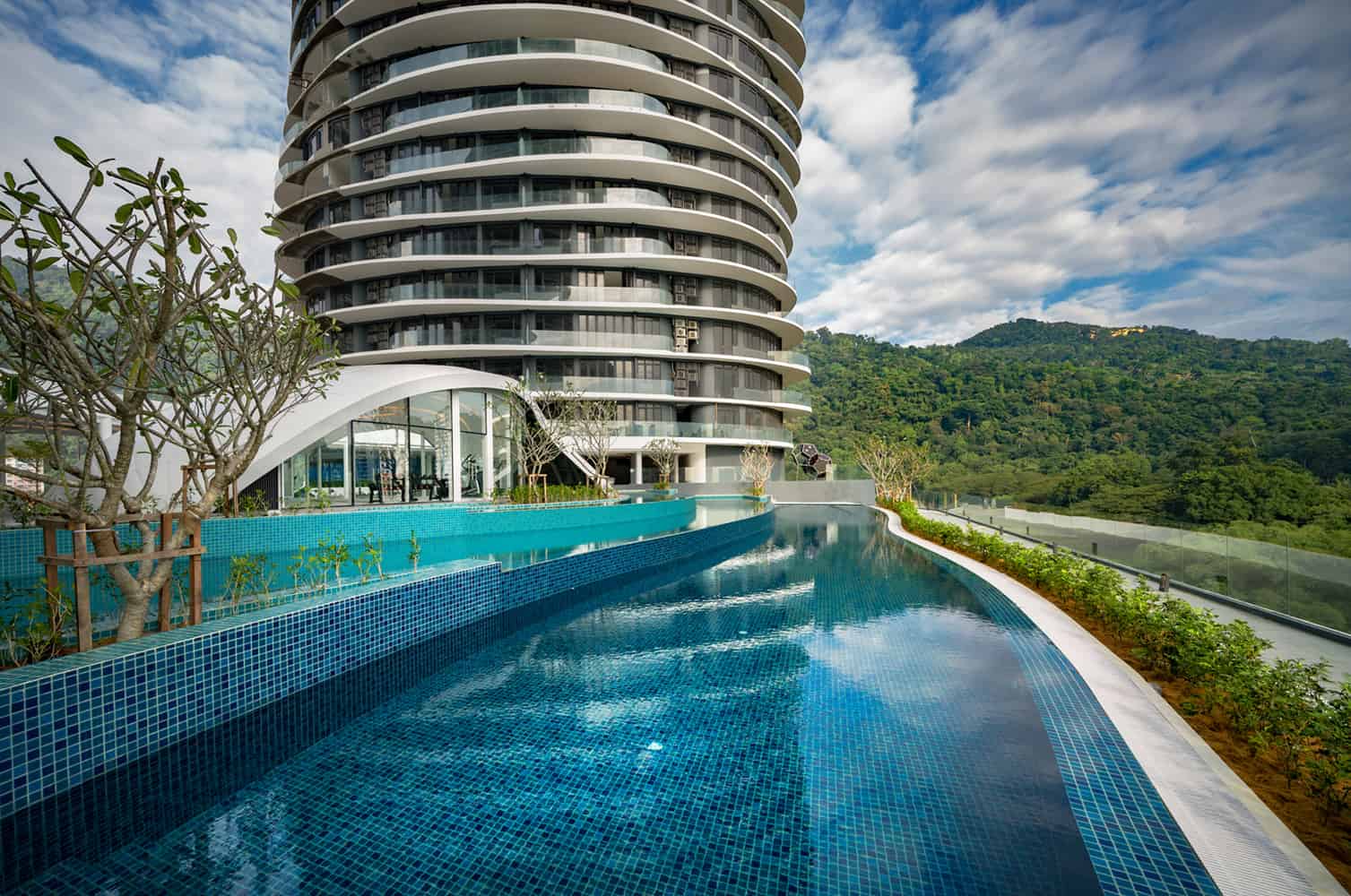 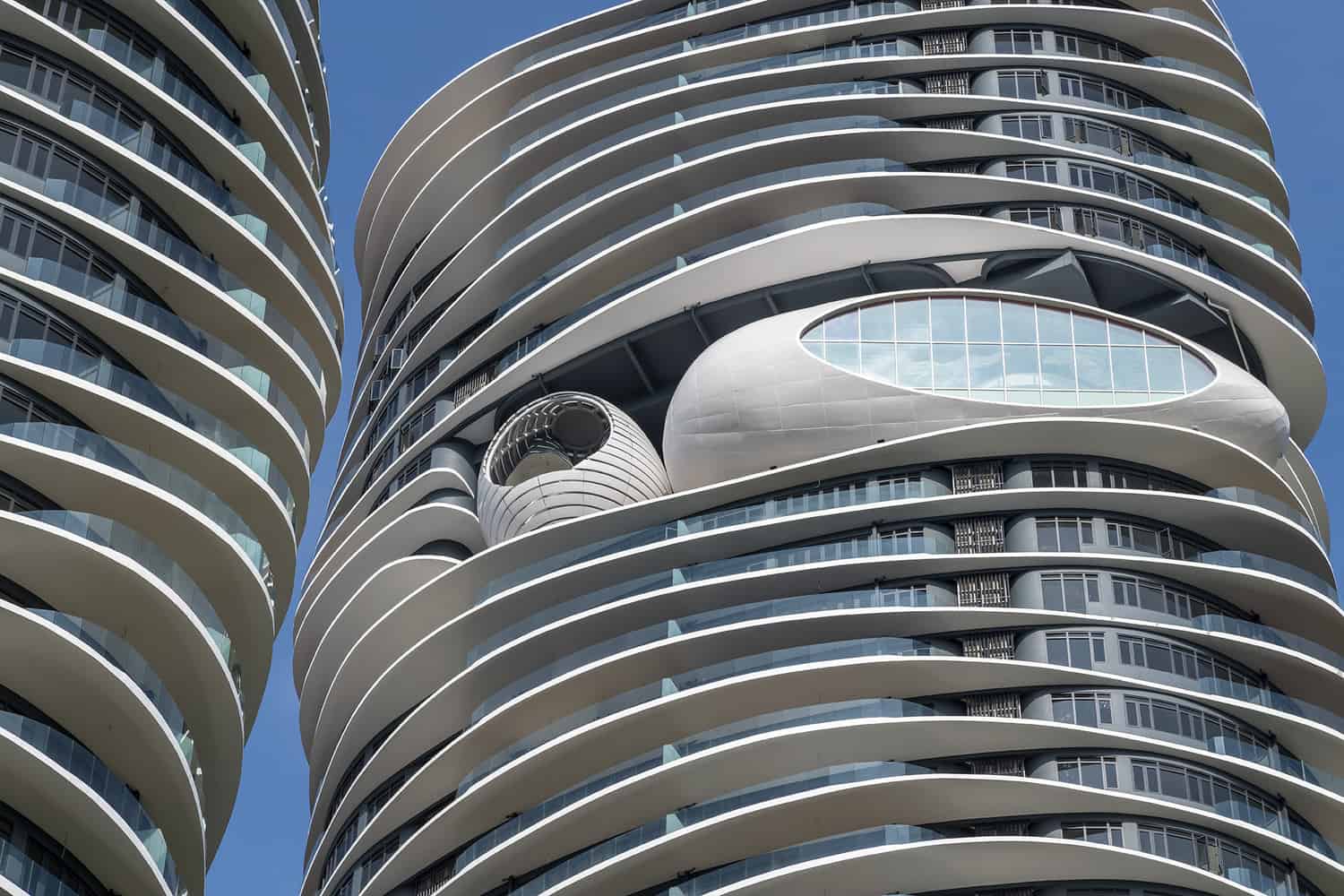 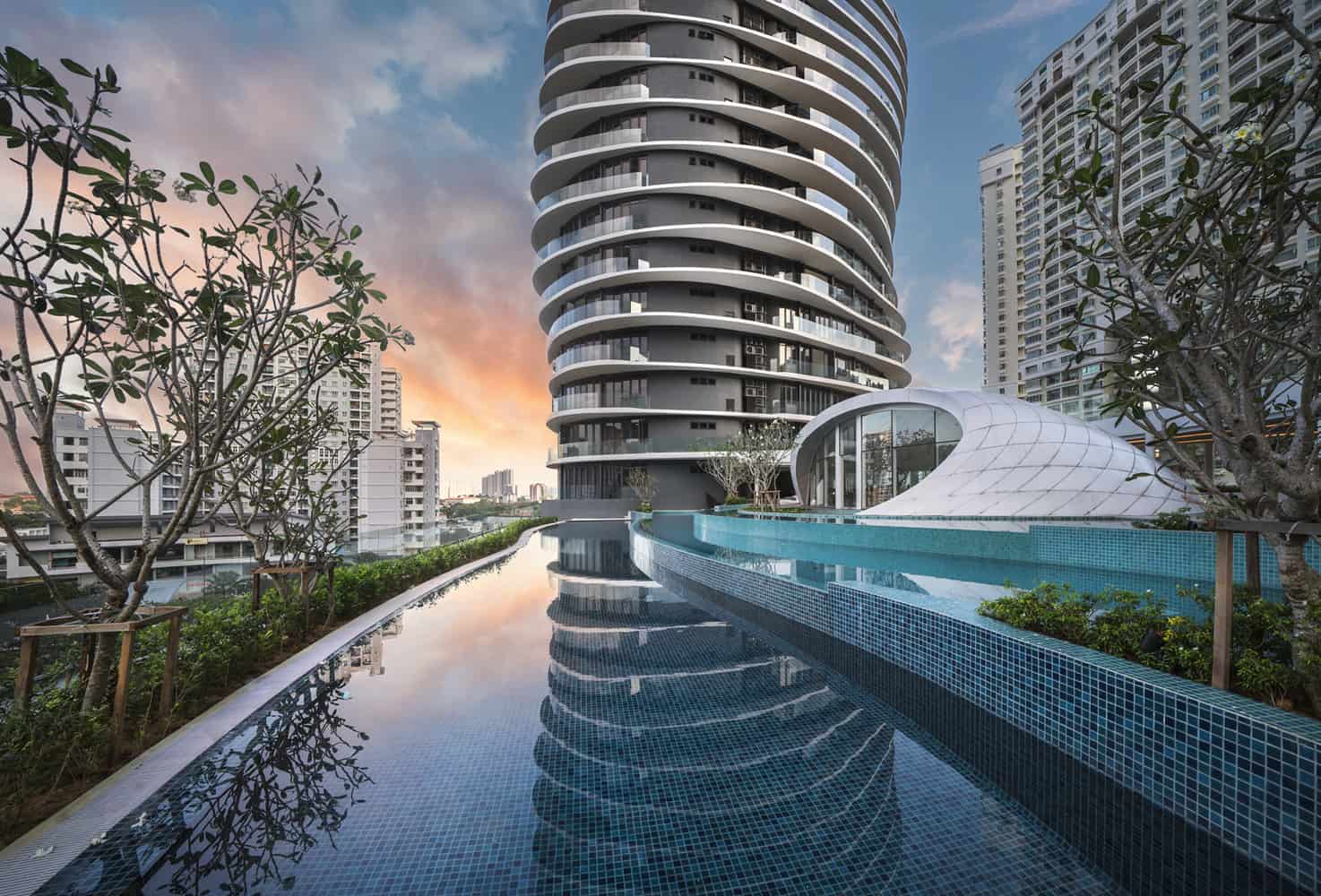 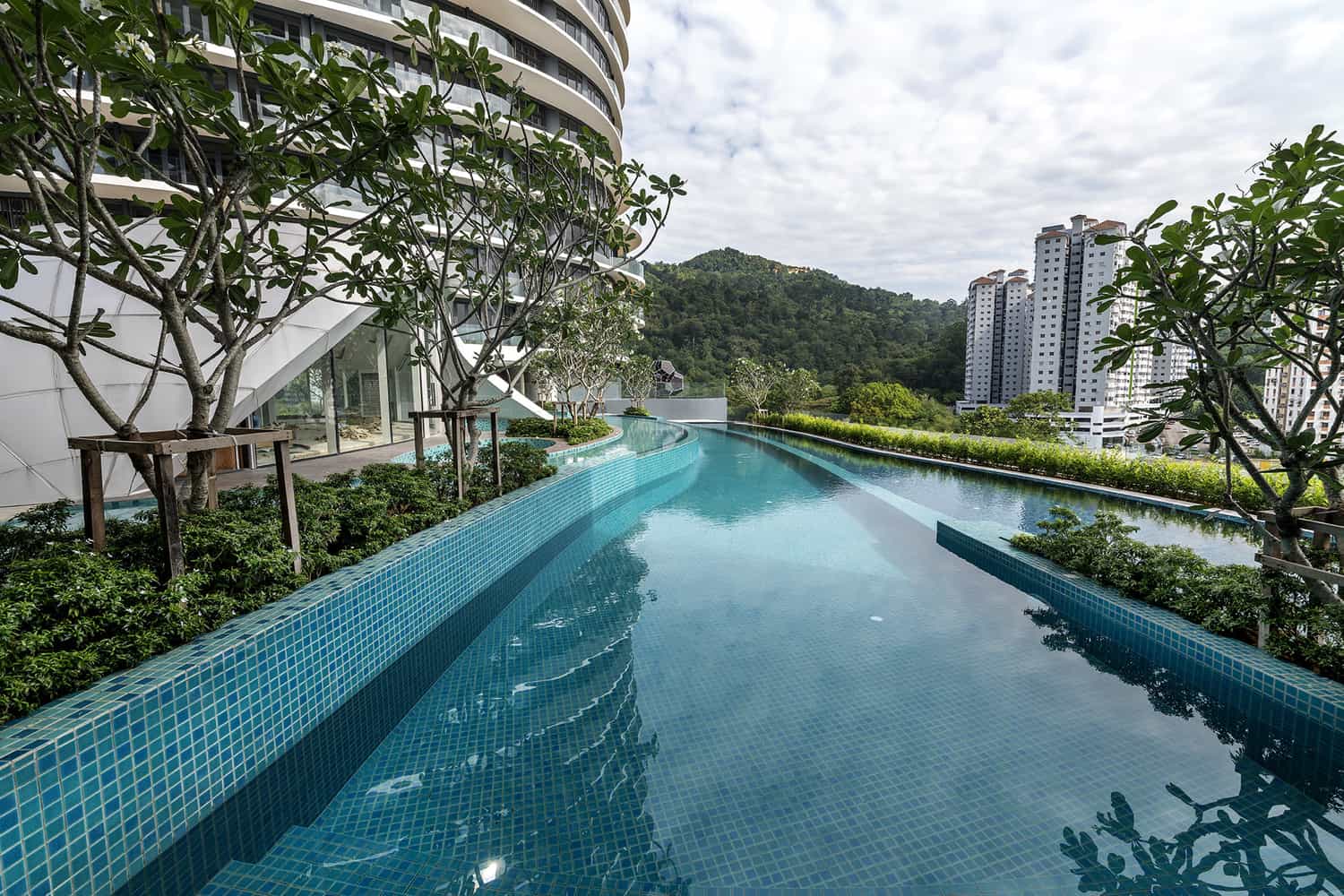 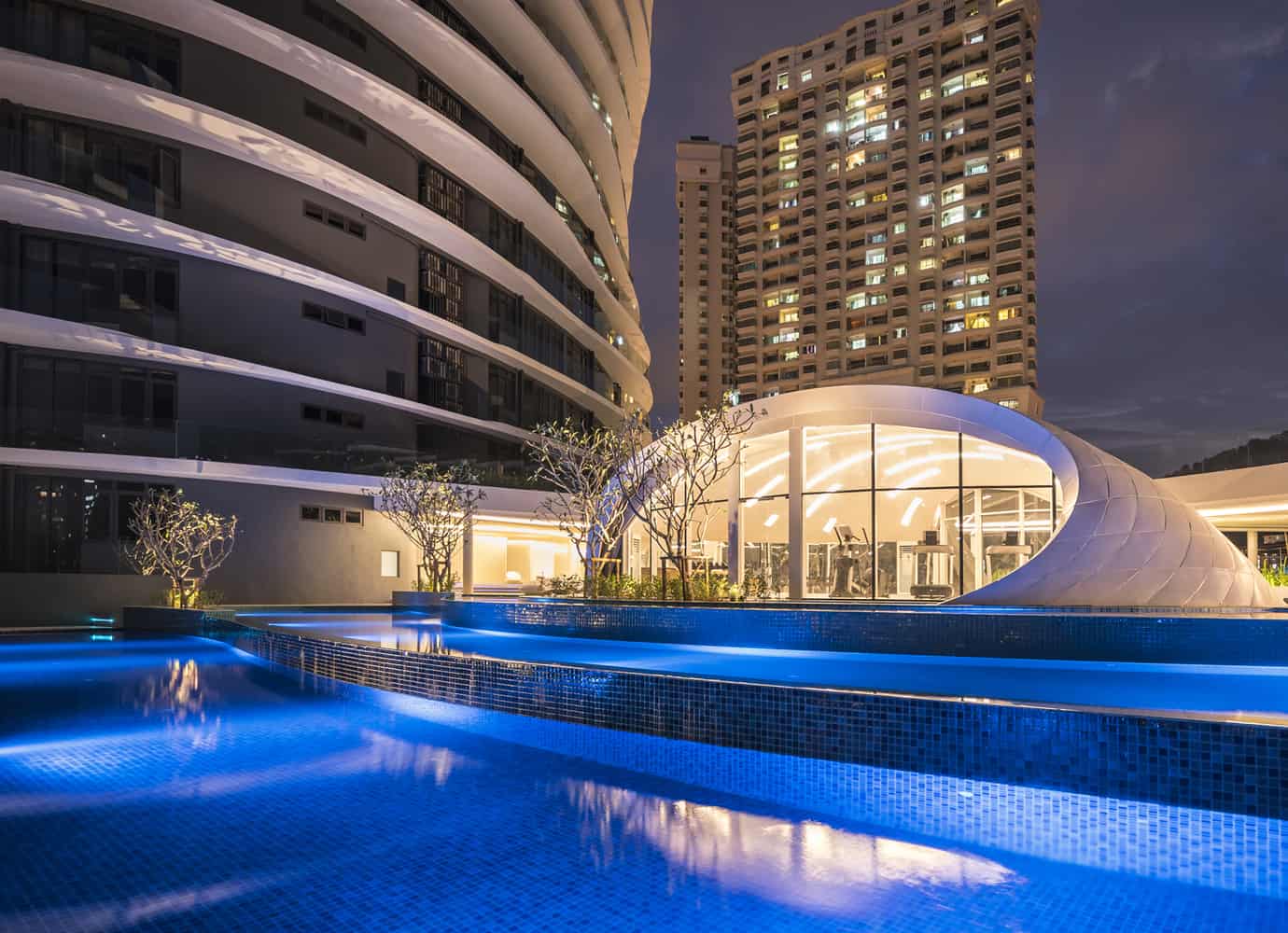 In the busy urban centre in Pinang, Malaysia, SPARK Architects recently created the visually stunning ARTE S building, a luxury residential building that resembles a spa and pool resort, giving residents a place to escape in the middle of the city.

Located in Jalan Bukit Gambier, near the better city of George Town, this project includes a pair of tall, undulating condominium towers that boast 460 residential units between them. The taller tower of the two is stands 180 metres tall and can be seen off the island from the mainland clearly in the distance.

Bukit Gambir is a lush topical mountain located right at the heart of Pengang Island, which lies off the Western coast of Malaysia. The towers are incredibly unique in the way their facade undulates at each layer. This lovely effect was intended to mimic the dramatic topography of the land surrounding the buildings, which varies between steeply rising hillsides and low coastlines.

Besides just undulating, the towers also appeared layered where the balconies sit. This mimics the mountainous landscape as well, with the graduated terrace effect mirroring the gradient of the rock faces. This effect was achieved using a construction technique called elliptical floor plating, which builders augmented with an added waveform birse-soleil that very carefully, subtly, and precisely rotated each floor a particular degree to give the buildings their twisted appearance.

Besides looking amazing in themselves, the towers are built with the intention of offering the best view of the ocean that one can find anywhere on the island. The taller of the two climbs 50 storeys high, while the shorter rises only 32. In each one, the penthouses at the top are sculpted from the final three floorplates.

On the very top of the highest tower sits a sky garden that incorporates two pebble-form recreational “resident club” pods. In the larger one, up to 60 people can be accommodated for events while the smaller hanging pod is home to luxury jacuzzi. Together the two pods create a wonderfully dramatic visual fro, the ground that acts as a signature for the building while also providing residents with an unparalleled view of George Town and the Straight of Pengang.

Inside, the units are entirely designed for flexibility and tropical living. They are open concept with no beams or poles, meaning they can be arranged in any way and at any time. The units are also specifically designed to bring in light and air naturally, eliminating the need for air conditioning and thereby saving hydro costs. In the common areas, the spaces are naturally ventilated and day-lit as well.

Around the building, several perimeter gardens have been planted at the base. These shroud the residential car park in lovely, local tropical plants that thrive in the area’s climate and would grow nearby naturally. This lovely green life contrasts beautifully with the modern appearance of the buildings and their shape, creating more texture for the eye to take in.

Of course, the pools at the base of the towers are an immediately noticeable primary feature. Their clear blue water attracts the eye and gives off a stunning reflection that mirrors the undulating visual motion of the buildings, enticing just about anyone who sets eyes on them and letting calming shapes set the atmosphere.