The architects have renovated and redesigned the interior of this 1,1614 square foot apartment located in Brookvale Park, Singapore. 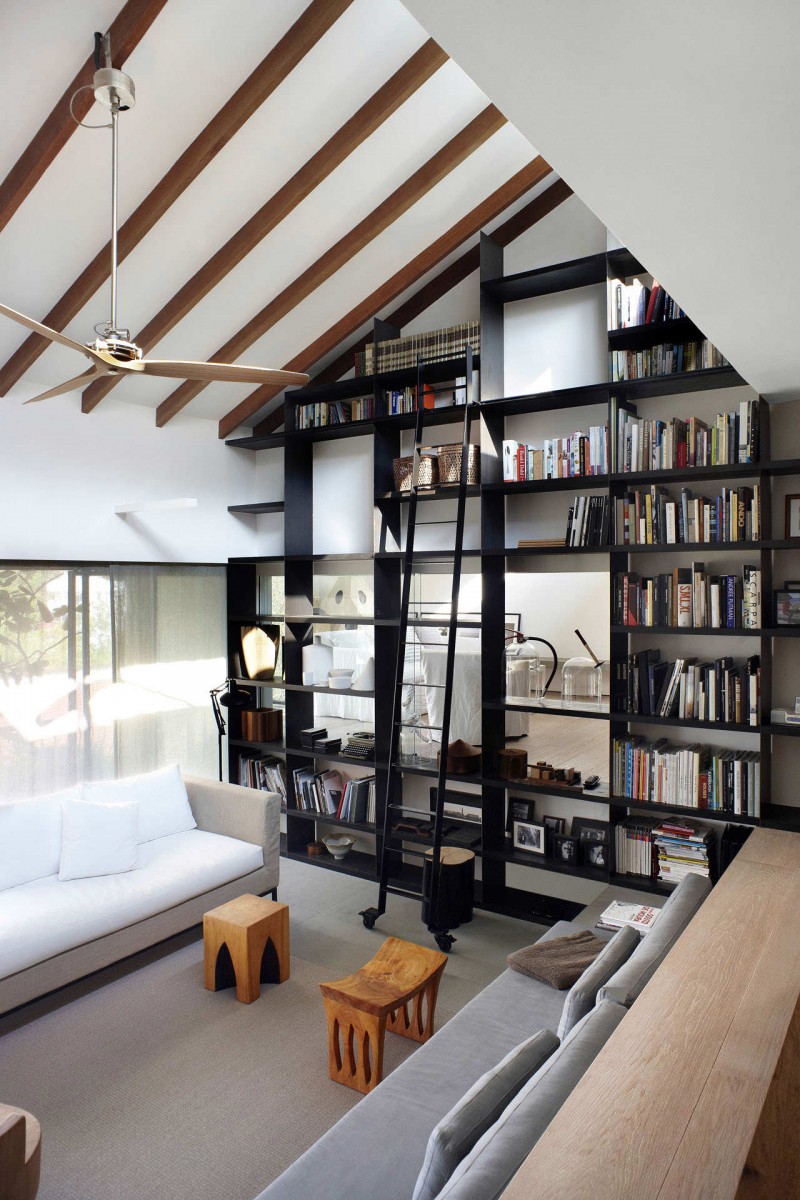 Tucked away in a corner off the main road, surrounded by lush greenery, sits one of those increasingly rare and threatened species of our built environment, a private walk up apartment with space to breathe and quietude for the soul. Like others built in its era, Brookvale Park combine both a stroke of practicality in its economy of scale, whilst maintaining sensitivity to the spatial proportions and distances that is required for its inhabitants to live life without the intrusive pressures of urbanity.

Individual dwelling units enjoy that rare commodity of a generous span of balcony, whilst internally, a sense of play abounds as different horizontal planes separate the public domain from the private. Belie this apartment’s aging exterior lies a potential sophistication of spaces which we recognised in our search for a home some years back.

After viewing countless different yet similar cookie cutter apartment layouts, we instantly saw the possible beauty of this top storey corner apartment. The slanted roof, though covered by the false ceiling, and diffused sunlight through the side skylight gently illuminating the interior, sealed the deal and we set out to sculpt the apartment into our home.

The entire original ceiling was removed and a series of solid timber rafters, concealed and darkened over the years, was revealed. These were sand down, restored, given its due recognition and fundamental objective to soar overhead and form the anchor of the apartment. Lush greenery, now framed by newly installed unadorned steel framed glass windows, provides the necessary cross ventilation that every tropical home should embrace.

Cool grey stones greet the visitor as one steps into the living room and a built in book case meets the eye. A long bench which functions as the main settee is integrated with a series of steps, serving to transit from the stone floor to the timber boards on the split upper level of the unit. The open kitchen now serves as the new back drop of the public domain.

The new Master suite takes over the entire rear portion, occupying what was once two guest bedrooms, a kitchen and a service bath. The collective space was given a complete overhaul, exposing the original roof rafters and creating an uninterrupted flow from the intimate bed space to the striking, opened bathroom.

The original Master bedroom now functions as a study. The wall separating the study and living room was removed as much as possible, allowing one to peer into either space through the voids of the book case.

The interplay of volumes within the apartment, brought about by the combination of the pitched roof, raised platforms and torn down walls reveal a strong yet flexible hierarchy of space that was intuitively understood and celebrated through the use of materials and careful detailing. The resultant space is one that has been crafted and honed to meet the refined sensibilities of modern life.

Unfortunately, with economics and “p.s.f“ (per square foot) figures rather than refinement of the living space being the driving force behind todays’ developments, one would be hard pressed to find an equivalent sophistication in the modern designs of today. Walk-up apartment blocks as old as Brookvale are an “endangered species” in our city-country of Singapore. Many are “en-bloc” (where owners of separate units band together to collectively sell their properties to a developer) and put up for tender for redevelopment, often replaced by typical floor plates which aim to pack as many units as possible into any given site. These alluring apartments are most often, torn down to give way to a bland permutation of soulless architectural condition and utilitarian living.

Brookvale is no exception

It is currently in the midst of a potential en-bloc tender and is in the mercy of prospective buyers versus the dwellers. The hope of publishing our apartment is to tell the story of such a charm that cannot be substituted with pristine new living quarters. Our wish is for like-minded individuals to cherish these living spaces and live in as they were meant to be.”

The Park House by Formwerkz Architects

Apartment Near A Park by HOLA Design

The Lemperle Residence by Jonathan Segal