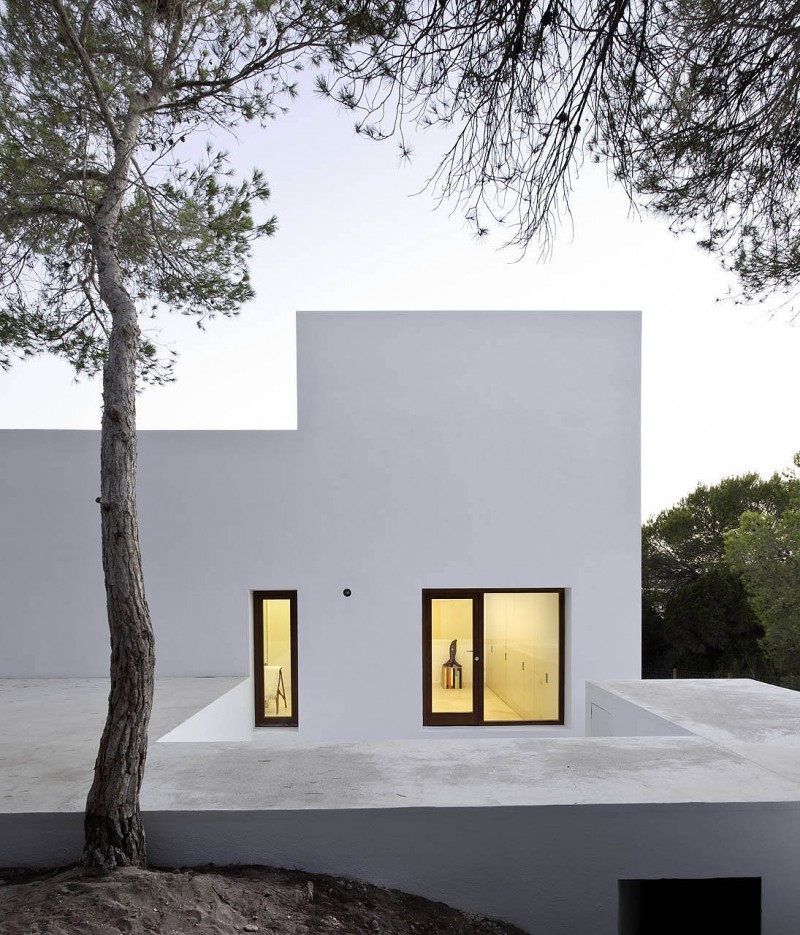 “Casa Amalia is located in the area known as “Es Ram” near EsCaló des Mort, on the southern coast of Formentera island. This is a small plot of 2000 m2 with very developed pines with moderate slope to the south and to the best visual: Migjorn beach and the cliffs of Cap de Barbaria in the background. The briefing was to amend an existing building of 143 m2, constructed in at least two phases between 1970 and 1990, to adapt it to the new functional program posed by the property.

Since the urban classification of the parcel on which the house is situated has very restrictive parameters, the project could not alter the built area or existing volume. Before the intervention the construction had a highly fragmented plant, unclear in the program management and presented areas of relationship quite introverted, with little relation to the splendid natural environment that surrounds it.

The reform carried out between 2008 and 2010 has carved into the existing mass to get the new program looking for fluidity between spaces, as well as refinine the surface bound itself to get the austerity look of the island’s local architecture with a contemporary language. Downstairs can be found the unified relational spaces (living room – kitchen – dining room), the master bedroom with its correspondants dressing room and bathroom, and a multipurpose room with access to the storage and service areas. On the first floor there is a second double bedroom with bathroom and a terrace with wonderful views.

The main volumetrical intervention has been to rethink the way the building contacts with the ground. That is, transform the given set of steps and different floors without any harmony, into a platform that embraces one side of the building, protecting it from the water runoff, and on the other side separates the house from the natural terrain giving shape to the terraces-viewpoint.

In order to achieve greater harmony and mix the original substrate with the new work, a limited palette of materials has been used. This are essentially a capri limestone pavement, gypsum in partitions, ceilings and vertical walls remaining, water-resistant MDF board laquered in white for custom made furniture, synthetic quartz plates in white and transparent laminated glass in the bathrooms, and natural sandstone for individual pieces.

Most of the furniture was custom made to achieve a better conciliation with the architecture. The rest consists on pieces from different periods like original Thonet chairs or the Na Xamena couch from GandiaBlasco.”

House in The Pines by Studio 27 Architecture

Comfort of Modern by NG Studio