Architects Nicolás del Rio and Max Núñez named this contemporary home ‘Casa 10×10’ because of the size of the courtyard at the center of the project’s design.

It can be found in Las Condes, Santiago Metropolitan Region, Chile and was created in 2010. 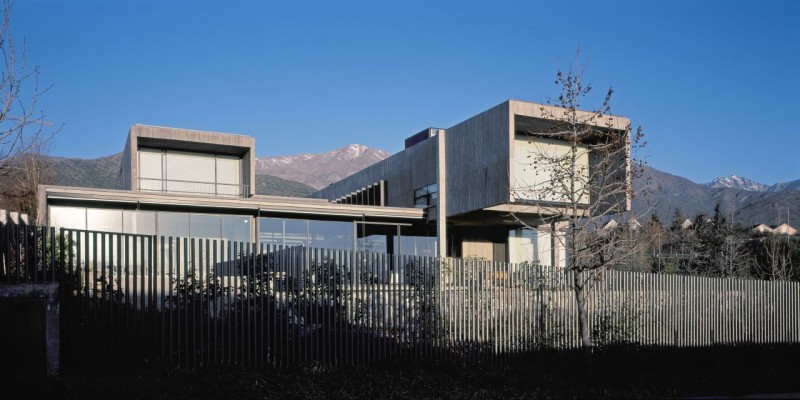 “The project is located in suburban foothills of the city of Santiago at 880 meters above sea level.

The site is a corner site of 1500 m2 with guidance and gentle slope to the northwest.

The number of meters that are built as part of the commission asked covering almost half of the surface of the site. We consider that the implementation of the project was to use the whole site.

Within this relatively conventional house, it looked that the various areas were visually related to each other, so as to bridge the physical distance and encourage interaction between its inhabitants.

In contrast, to the outside, the house should have a more severe, more controlled views or frames to avoid the gaze of neighbors and noise from nearby streets.

The house is thought from 3 unique elements: a shady courtyard 10×10 meters, a beam bridge suspended over the courtyard, and an entrance hall palace where measures would be the main staircase.

The choice of concrete, with identical patterns for the interior and exterior of the house, would give the project a consistent that homogenize the diversity of project volumes and spaces, accentuating structural strength and the contrast between open faces and faces opaque.

All campuses of the house are organized around the central courtyard of 10 × 10. On two floors, are set down spaces and private spaces above.

Looking from the house to the city, 800 meters to the north west, is the Chapel of the Benedictine Monastery of Las Condes.”