Park + Associates created this contemporary home for a family located on Berrima Road in Singapore.

The emphasis of this project was on social interaction between occupants and an internal transparency that allows the adults in the household to monitor their children at all times. 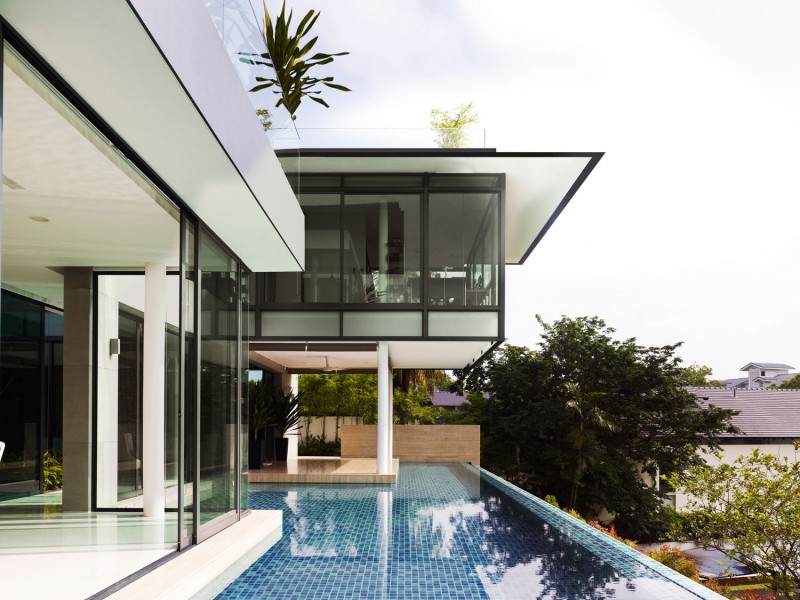 “The house was programmatically separated into distinct zones for various activities and members of the household.

On the first level, the separation was also physical, with planar walls demarcating each space. Encouraging social interaction was a priority in spatial planning, and a high level of visual connectivity was also sought for the mom to satisfy her supervisory propensities from her axis mundi, the kitchen.

The idea of surveillance is extended further with punctuation of strip voids through various walls, inviting a sense of inquisitiveness among inhabitants and passer bys alike.

Split in thirds down its length, the house is divided into 2 wings that flow seamlessly into the courtyard garden, delineated by a perimeter of full height sliding doors.

The conglomeration of internal and external living areas forms the communal space, while the second level is a private floor with one wing for the children and the other for the parents.

A feature wall separates the front garden from the courtyard, affording privacy to the main house. A horizontal strip void at eye level allows inhabitants to peek out at neighbours walking past or guests waiting outside the house.

Capitalising on its partial setting on elevated ground, the living and dining rooms flank the rear half of the house, maximizing unobstructed views of greenery within and outside the site boundaries.

Awareness of the landscape is heightened by opening out to a spa pool and an infinity pool perched on a slope.

The kitchen is placed diagonally opposite the living room, allowing the mother to keep an eye on everyone while going about her chores; and adjacent to the dining room for practical reasons.

Getting from the living to the dining room involves traipsing across the courtyard or under the bridge linking the children and master wings.

A flight of stairs adjacent to the living room leads to the children’s wing on the second level.

Three bedrooms lie in parallel, terminating with a common study above the pool patio.

The study boasts excellent vantage on three sides because it extends beyond the other wing, encouraging the children to spend more time here than in their individual rooms.

The corridor linking the rooms is sheltered from the elements by an operable glass curtain wall, offering a direct relationship with the courtyard and sky. Transparency also allows for interaction with their parents across the courtyard.

A sheltered bridge links to a living pavilion that also opens out to the view. The generously proportioned master bedroom is sandwiched in the nave with maximum retreat, and complete with an attached study, walk in wardrobe and balcony toward the front of the house.

The corridor on this wing is sheltered by a solid wall, keeping with notions of maximizing privacy. However, a horizontal void was punctured at eye level yet again, to facilitate communication with and supervision of their children.

The balcony is cantilevered off the first level, eliminating the need for a separate car porch element, and is shielded from direct evening sun by aluminium screens at the front.”