Monteverdi is a retreat located in Castiglioncello del Trinoro, Italy, and was designed by Ilaria Miani.

The structure is surrounded by the stunning Tuscan countryside, and its interior makes use of the rustic element of the exposed ceiling beams and stone walls to add character. 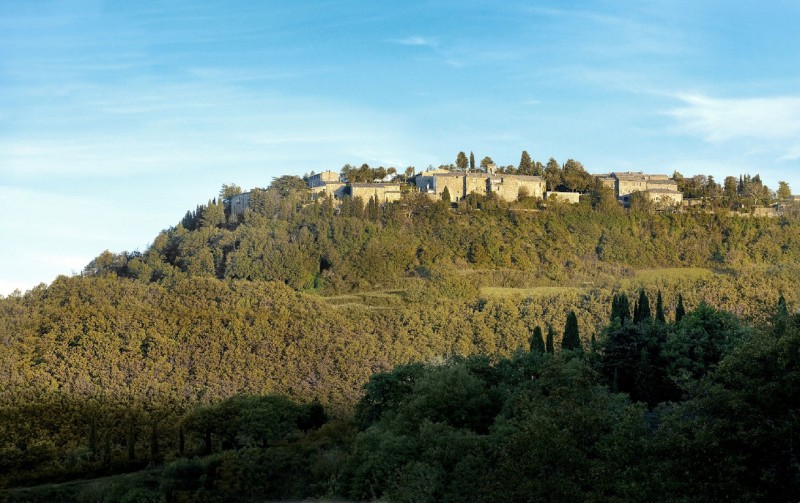 “Nestled in the historic heart of the Val d’Orcia region and lying dormant for the past few decades, the village of Castiglioncello del Trinoro has recently undergone a transformative restoration and re-emerged as a veritable destination, in its own right. Situated among some of the world’s most famous wineries and adjacent to the Origo Family’s remarkable La Foce Gardens, the project— simultaneously driven by a passion for preservation and a dedication to a buoyant and long-term future—is the labor of love of Michael Cioffi, an American lawyer and law professor who has dedicated himself to rebuilding the semi-abandoned, medieval village in a traditional and beautiful manner that is inherently sensitive to and pays homage to the Tuscan region.

The painstaking restoration process, originally begun in 2004 with the acquisition of a singular building in desperate need of attention, has revived a whole village from previous neglect, culminating this summer with the highly-anticipated opening of The Hotel at Monteverdi, a collection of 3 completed villas, a newly-restored 12th Century chapel, a farm-to-table driven informal Caffè, and an exciting program of cultural events.

Having opened in August 2012, the 7-bedroom bijoux Hotel Monteverdi offers guests unmatched comfort, spectacular vistas of the verdant valley below, an adjoining outdoor swimming pool, and effortless guest services all within a stunning and charming cadre. In collaboration with Italian interior designer Ilaria Miani and Ernesto Bartolini of DA. Studio as principal architect, the property has brought together regional artisans utilizing craftsmanship on the brink of extinction, local stone masons and builders, and truly breathed new life into Monteverdi converting it into a “second-home getaway as an intellectual and cultural sanctuary.” The use of indigenous materials and reclaimed wood were central to the meticulous and authentic reconstruction of this former pensione.

Local woods, Tuscan flagstone, granite and Carrara marble give each room a distinct appearance that is authentically grounded in the spirit and humble origins of the Val d’Orcia. Working in tandem with her husband, Rome-based Ilaria Miani infused The Hotel at Monteverdi with her own tasteful and eclectic signature: a sensibility that embraces simplicity, unencumbered spaces, optimization of natural light and ubiquitously spectacular views. A restaurant will follow in early 2013.”

A Stunning Spot in the Heart of the Mantiqueira Mountains

House in Elie by WT Architecture

An Apartment in the W Boutique Tower by Ando Studio