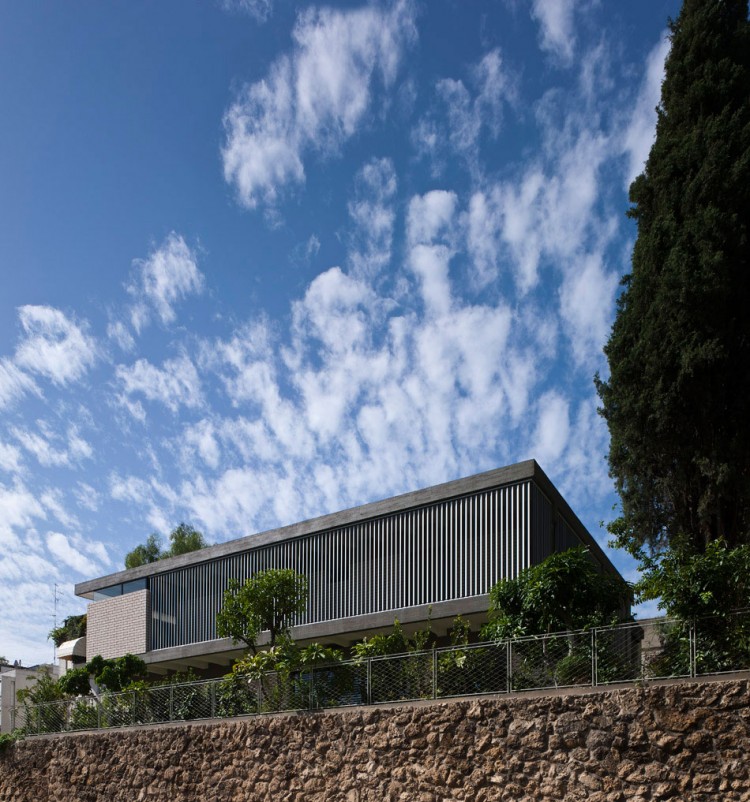 “The “Rechter House” in Tel Aviv was originally designed by Zeev Rechter as a single storey home for his family with an orderly arrangement of internally and externally exposed, longitudinal concrete beams which formed the basis for the internal spaces, whilst adhering to the principles of “open planning” that were prevalent in those years.  Over the years, an extra floor and a third wing were added to the building in such a way that its original form was hidden and the modern design principles governing its original design were abandoned.

As the project’s designer, I was asked to cope with a situation where the house had been stripped of its original ideas, disconnected from all of its parts and been used by two, separate families.

The family that purchased this old and neglected building asked me to design them a home that united all of the parts of the dwelling into one, new fully integrated living unit, both in terms of its function and its design style.

The main idea behind the project wasn’t necessarily to preserve the existing habitat and its configuration, but rather to conserve the spirit of the original design.  With this in mind, I redesigned the house’s external features and internal spaces.  I preserved the horizontal grid and gave it extra intensity when I divided it into two halves through the use of a spacious double space running its entire length.  Within the space, I placed a stair case that consolidated all the masses of the structure into one single unit with a huge bookcase along the entire wall that further emphasized the double space.  I zealously preserved the original concrete beams and the broad schematic of the building.  The design and placement of all internal spaces, functions and rooms was integrated so as not to deviate from the horizontal grid.  I also addressed all the external walls of the house.  I made new openings that allowed views from both the outside into the home and from the inside out.  This was done in order to emphasize the length of the lines and the different architectural elements.  On the long façade fronting the street, I allowed for a dialogue between the structure and the street by installing vertical, aluminum leaves that move on an axis and allow for a visual connection between the residents of the house and pedestrians in the street, and a blurring of the barrier between the private and the public.  The movement of the leaves allows light to enter at differing angles during the day and thus brings life and drama into the highly organized spaces and the restrained architecture.

The choice of materials (such as the concrete floor and exposed concrete beams, iron stairs and railings that underwent a prolonged process of rusting, the repeated usage of the original silicate blocks and various metals placed at differing intervals) was done with great thought and included materials that are not considered “fashionable” so that they will not overpower the architecture  and will help form a bridge between the two era’s; the first, the original one storey design and the other the new, present day design.  With the new design, I tried to write or present a personal and updated version of a private dwelling in the spirit of the modern era and in an international style.

The final result of the architectural design and the new interior design is a reserved and cultured private home with human proportions and spaces that together form a strong and clear form, free of unnecessary decorations and designer “chit-chat” with a clean and moderate form and ideas, that reflect the architectural and social principals that are so difficult to find in today’s modern world.”