This two story contemporary home is located in Bainbridge Island, an island and city in Kitsap County, Washington. 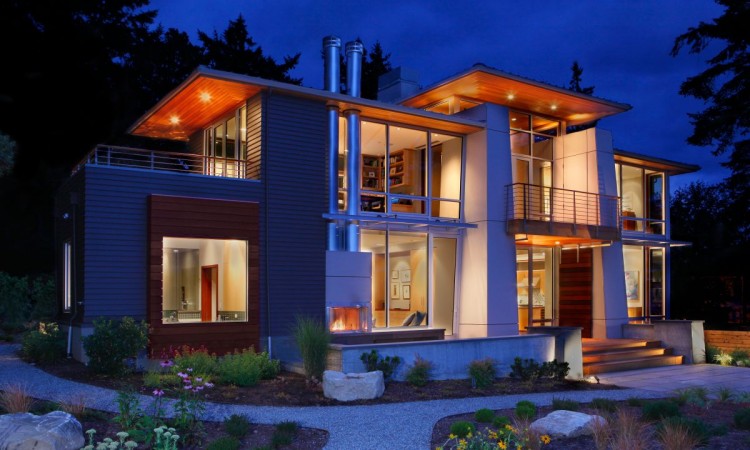 “The Olympic View House house is a two story home designed for a couple newly retired from careers in academia on the East Coast of the United States. The site constraints included steep slopes, drainfield setbacks and a zoning variance. The resultant building footprint reflects these constraints in a manner which ultimately accommodated the Owner’s goals for the house.

The house is 2,700 sf and includes all main floor living for day to day functions for aging in place. The upper floor consists of a media area, office, piano and guest bed/bath rooms.

The house is a contemporary expression of Northwest Regionalism with both accommodation of serious weather conditions and aesthetic considerations for massing, light and presence. The house commands views of Port Orchard Narrows and the Olympic Mountain Range beyond through a membrane of glazing rather than conventional punched window openings.  The glazing membrane in-turn allows the solid massing elements of the house to be expressed and meaningful.

A thoughtful use of both exotic materials such as Ipe and clear hemlock as cladding and ceilings respectively and more cost effective choices such as Hardi Artisan and Hardi Panel bring together a blended palette. This articulation of this material palette simultaneously proves to be both warm and substantially grounded.

The strength of the center core of the building is emphasized by a framework of battered bases on each corner.  The tops of the bases are held short of the roof plane by two feet allowing the roof to appear to float above the body of the house. The roof then acts as more of a canopy allowing light to penetrate the building at all times during the day and be a lantern for the streetscape at night.”

The Dorsey Residence by Coates Design